Weekly videos — in three minutes or less — on global markets and investments, from the investment experts at Northern Trust.
SUBSCRIBE NOW
Contact Us
To learn more about our distinctive solutions and client experience, call us today.
MarketScape
October 28, 2019

Earnings Not Looking So Bad

Third quarter earnings season is underway, and while analysts expect profits to be down versus a year ago, we see reasons for optimism. Head of Fundamental Equities Chris Shipley explains.

Earnings season is underway, and US earnings estimates suggest a 4% fall in the third quarter versus last year. While that's less than inspiring, we think the underlying trends are less worrisome. Here's why.

During a typical quarter, earnings estimates by analysts drift lower. Then when companies report their results, earnings tend to beat those lowered expectations by 3% or 4%. Early results show that trend playing out. With that likely to continue, we expect earnings to be roughly flat with a year ago, consistent with what we saw in the first half of the year.

Notably, the flat earnings so far in 2019 are against very tough comparisons of 20% growth last year. In addition, aggregate earnings for the S&P 500 are weighed down by energy and a few large tech companies, reflecting lower commodity prices and challenges in semiconductors and smartphones. The median company is expected to fare better, posting positive earnings growth.

Digging a bit deeper, we've been hearing both good and bad feedback during earnings reports from companies on the general economic picture. Semiconductor and industrial companies have been confirming the weakness we've seen from the broad manufacturing statistics, but importantly, the consumer side of the economy still appears quite healthy, based on the credit and spending data in the reports by banks.

So why is the market up so much this year in the wake of such sluggish corporate profitability and a mixed economy? Well, remember that the market is only modestly higher than September of last year. The year to date gains have mostly served to offset declines in the fourth quarter of last year, where investors were worried about the Federal Reserve's insistence on raising rates. The subsequent about-face, where interest rates were reduced, contributed to the market recovery this year.

As we look forward to the fourth quarter, we expect positive earnings growth, and we see 6% growth in 2020. While we acknowledge that the upcoming US election could act as a risk to market sentiment, a return to positive earnings growth provides some fundamental support. When combined with slower but still positive economic growth and accommodative Fed policy, the backdrop for US equities still appears relatively constructive. 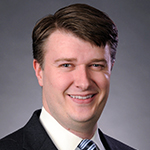 Chris Shipley is head of fundamental equities at Northern Trust Asset Management, where he oversees the firm's fundamental equity research and portfolio management efforts. Chris is a voting member of the firm's Tactical Asset Allocation and Investment Policy Committees.