Keep up with how the latest headlines moved markets, and what’s up next.
SUBSCRIBE NOW
Investment Perspective, June 2020
June 16, 2020
PRINT

Global financial markets have rocketed back from their late-March lows, with the S&P 500 briefly in positive territory for the year.  Why are the financial markets performing so much better when the economy is still so weak?  Financial markets employ discounting mechanisms, seeking to anticipate events six to twelve months in advance. There hasn’t been much need to anticipate the impact of monetary policy as it has been extraordinarily fast and broad-based in providing support to the financial and real economy.  Fiscal policy has helped consumers globally to bridge their lost income as unemployment levels are at steep recession levels.  But renewed animal spirits have also contributed to the market’s performance, as indicated by the involvement of the retail investor.  As shown below, the number of new accounts at leading online brokers has ballooned this year, and traders have driven hard-to-comprehend price gains in newly bankrupted companies.  As Sir John Templeton once opined, “bull markets are born on pessimism, grow on skepticism, mature on optimism and die on euphoria”.

The strong market rebound has led to elevated valuations across equity markets at a time when the global economy is only in the early stages of reopening.  Strong U.S. job gains in the month of May were a big surprise, and we also saw improvement in the Canadian and Australian labor markets.  Eighty percent of those Americans who lost jobs in March and April cited the loss as temporary, likely setting the stage for the strength of these gains.  The insured unemployment rate, however, remains at a very high level of 14%.The pace of economic recovery from here will increasingly be influenced by consumer behavior instead of government policy, as consumers are still expressing hesitancy to undertake activities like flying or sending their children to school.

We reduced the recommended tactical risk in our global policy model again this month, shifting 4% out of U.S. equities and into a combination of investment-grade and high-yield bonds. This now puts us moderately underweight risk as we are concerned the stock market is overly optimistic about the growth outlook over the next year.  A key risk is that policy support will prove insufficient in the face of a second wave of COVID-19.  Our other risk case is an upside one – that the stock market has it right, and that earnings growth will positively surprise and end up justifying current high valuations.

At its June meeting, the U.S. Federal Reserve kept the federal funds target range unchanged at 0.00% to 0.25%, projecting it will not change until the economy is on track to achieve maximum employment. Chair Jerome Powell emphasized the central bank’s commitment to maintaining current asset purchases and using all of its resources to support the economy for however long is needed. The New York Federal Reserve specified it would increase its holdings of Treasuries by $80B per month and mortgage backed securities by $40B per month. This underscores the Fed’s belief that more action is necessary, but left questions on topics such as yield curve control and asset price bubbles unanswered.

The European Central Bank boosted its bond buying stimulus package by €600B, surpassing most economists’ expectations. With significantly lower GDP and inflation expectations (-8.7% and 0.3%, respectively) the stimulus increase is designed to regain pre-virus inflation levels and ease eurozone market stress. Italian and Greek 10-year yields hit 3-month lows. The yield differential between 10-year Italian and German bonds, an indicator of eurozone political and financial risk, fell to its narrowest level since late March (<1.75%). 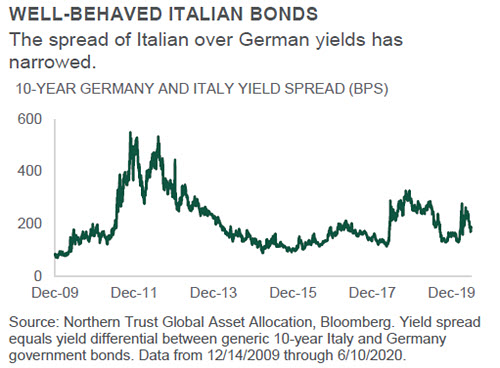 Growing investor optimism over the potential re-opening of the U.S. economy supported valuations in the high-yield market, especially for many distressed credits. The ratio of bonds trading at or below $70 (a metric often used to classify bonds as distressed) to the total high-yield index illustrates the shift in sentiment. After peaking at 17% in March, the percentage of distressed credits within the high-yield universe decreased to just over 9% in May. Over 60% of these distressed credits are made up of energy and consumer cyclical credits, with demand in both sectors extremely sensitive to shelter-in-place policies. These sectors have been major drivers of the increasing default rate. As the distressed ratio decreases, so too do default rate expectations, which correspond to higher total return forecasts.

Similarly to eased shelter-in-place policies, distressed credits have benefitted from accommodative monetary and fiscal policies that have improved liquidity. Evidence of a more resilient consumer suggests demand could return in these sectors faster than initially anticipated. A more constructive economic backdrop over the near-term is conducive for tighter high-yield spreads going forward. 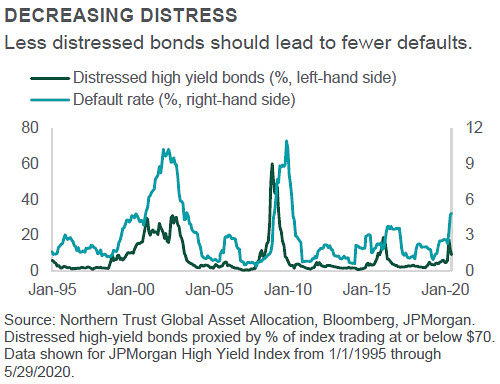 Global equities continued to power ahead over the last month on the optimism of businesses reopening and consumers emerging from their homes, bringing U.S. large-cap stocks back to as high as a flat performance on the year.  This remarkable recovery comes despite many remaining uncertainties and a material reduction in earnings expectations – not just in 2020, but carrying through to 2021 (see chart).  With expectations for 2021 earnings across major global regions down 16-18% against prior expectations, recently recovered markets have actually seen valuations increase versus the beginning of the year.  The 2021 S&P 500 P/E multiple was roughly 17.5x at the market peak earlier this year, and moved to as high as 20x on the recent market bounce.

As a result of our expectation that economic activity and corporate earnings will level off below the prior trajectory, combined with the potential for a second wave of virus concerns and uncertainty regarding the upcoming U.S. presidential election, we view the recent optimism over risk assets as premature and potentially exaggerated.  As a result, we have further reduced our equities exposure, bringing the U.S. to equal weight, and keeping non-U.S. underweight. 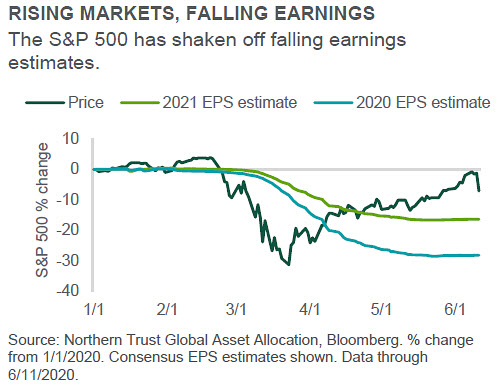 It has been more than a month since the May oil future contract hit -$38/barrel. Concerns about the June contract suffering the same fate were alleviated by a reduction in storage facilities (allowing contract holders to take delivery) and a change in strategy by oil investors (ETFs etc.) to spread out the contracts held instead of concentrating them primarily in the contract coming due. In fact, oil prices have rebounded fairly significantly to near $40/barrel but still below the $60 price tag they had entering the year. The OPEC Plus group of countries’ decision to extend production cuts through July supported markets. If Saudi Arabia and Russia adhere to the constraints, the agreement will likely be considered a success.

While OPEC Plus’s decision was in line with expectations, the group is not out of the woods yet, as the rally has pushed oil prices above the operating cash costs needed to restart production in the U.S. and Canada. That said, new drilling and completion work will likely remain stunted until oil prices rise to around $45-$50 per barrel and show some sign of stability at or above that level. Overall, because of our expectation for a slow revival in demand coming out of the COVID-19 crisis, we remain underweight natural resources. 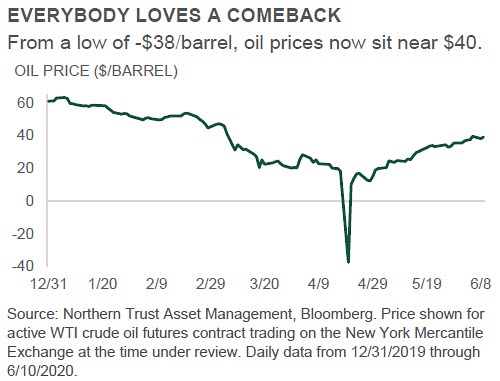 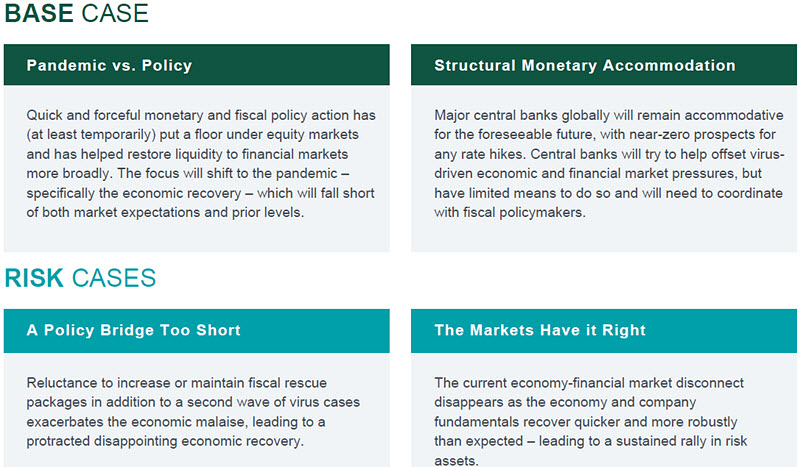