Keep up with how the latest headlines moved markets, and what’s up next.
SUBSCRIBE NOW
Investment Perspective, April 2020
April 14, 2020
PRINT

Risk markets have rallied strongly since the fourth week of March, reflecting a collision of positive policy developments and bearish investor sentiment. After a one-month decline of 34% in the S&P 500, we have experienced a snap-back rally of 25% in 14 trading days. Credit markets have seen similar trends, with investment-grade and high-yield spreads rallying smartly from their highs in late March – but they remain at elevated levels from the start of the year. Meanwhile, the tremendous economic damage from social distancing globally is only starting to come through in the official economic data. We have been highlighting our focus on the necessary policies required to address the COVID-19 virus and its fallout, from monetary to fiscal to health policy.

We have been expecting new COVID-19 cases to peak in Western Europe and the U.S. in late March/early April.  This timing is coming to pass and has undoubtedly been a market catalyst. The focus will likely now turn to the risk of another virus wave as countries restart their economies and make progress on treatment and a vaccine. The monetary policy response has been robust, with the U.S. Federal Reserve acting with greater speed and impact than during the global financial crisis. The scope of the central bank’s efforts to improve market liquidity and support economic growth has positively surprised even the most bullish observers. European leaders recently agreed to a major policy response, which involves the use of the existing European Stability Mechanism (ESM) fund.

The fiscal policy response has been broad and rapid, with uncertainty focused on implementation and effectiveness. The government’s Payroll Protection Program loans are meant to support employment to speed the restart of the economy. While initial reports are that loan funding is slow, we have no doubt the overall amount of funding will be boosted if necessary. We retained a moderate overweight to risk assets this month as we feel the combination of policy actions is supportive to risk-taking and the eventual restart of the economy. The rapid and coordinated monetary and fiscal response of the U.S. government leads us to favor U.S. equities over those of other regions, while the attractive valuation of U.S. high yield supports our continued overweight of high-yield bonds. Last month showed substantial progress on the policy front. However, we expect continued volatility as dour economic reports emerge and investors grapple with the risk of another wave of infections. Our risk cases now focus on the calibration of fiscal policy, and whether it will be adequate to support growth without unleashing a secular bout of inflation.

The record $2 trillion stimulus bill designed to offset the negative economic impacts of COVID-19 is being funded by a record issuance of short-dated debt at historically low rates. The $319 billion of Treasury bills supplied has already far exceeded the $190 billion provided during the global financial crisis. This extra supply hit at the same time companies and investors, looking for cash, pulled money out. This forced the Fed to step in, currently buying $50 billion in Treasurys per day across maturities (down from $75 billion per day in mid-March).The Fed has already far exceeded its previous record for monthly purchases and has brought some normalcy back to the Treasury markets.

Following days of intense discussion, eurozone leaders agreed to a €540 billion rescue package. At its core, the agreement includes €240 billion in credit lines from the ESM fund, a €200 billion boost to the lending capacity of the European Investment Bank and a €100 billion unemployment insurance scheme. This brings the level of fiscal support in Europe close to that of the U.S. as a percentage of each region’s GDP. Coordinated fiscal and monetary efforts should continue to help offset virus-related economic and market disruptions. 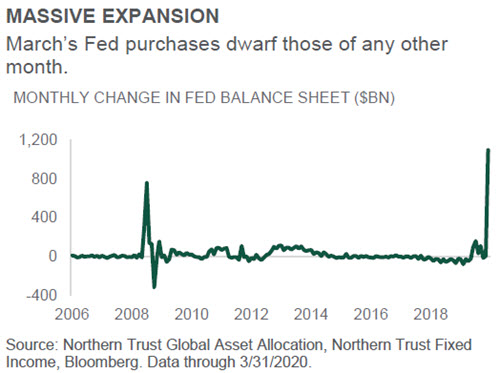 The economic shutdown of the global economy from COVID-19 and the Saudi-Russo oil price war has led to a reassessment of credit quality across the high-yield universe.  Rating agencies have moved quickly to downgrade companies as the negative impact on revenues, costs and liquidity from the crisis is better understood. As the graph shows, CCC-rated credits have fared the worst, with a downgrade-to-upgrade ratio in excess of 10x. However, a ratio of 10x is not unprecedented, as CCC-rated credits saw more than 200 downgrades and only one upgrade during the fourth quarter of 2008.

This weakness in low-quality credits contrasts with the relative stability in BB-rated credits. Despite this stability, BB-rated credit valuations have widened to levels not seen since 2009, implying that valuations do not accurately reflect the fundamental strength of these credits. The first-quarter sell-off has resulted in a constructive view on BB-rated credits given attractive valuations. High yield issuers may face idiosyncratic risks as a result of the economic shutdown and oil price war but, broadly speaking, high yield is attractive – especially with recently announced purchases from the Fed. We remain overweight high yield 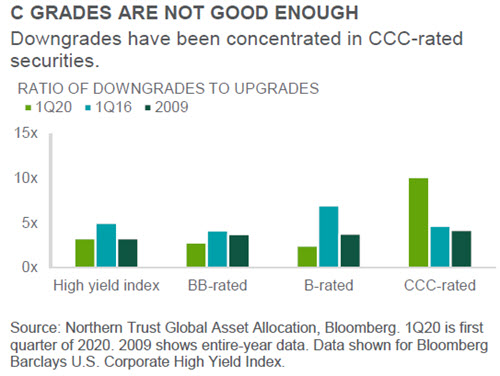 Global equities wildly fluctuated last month, with major regions bouncing from 30% drawdowns. The average daily move in the S&P 500 over the past month was nearly 5% – a level of daily volatility exceeded only in November of 1929. March saw eight trading days with daily moves of more than 5%, tying the previous record. Virus uncertainty, taking large portions of the economy offline, drove the decline. The market’s recovery can be traced to a slowing of new cases in areas like Italy, Spain and New York (a light at the end of the health crisis tunnel), combined with a promise of vast fiscal and monetary stimulus to see the economy through the shutdown.

We have undoubtedly been taken off the prior trajectory of growth around the world. Without knowing when and to what degree the economy will restart, markets will focus on “normalized” earnings in 2021. We think 2021 will be below 2018 and 2019 levels, but well above the depressed current year. On that basis, the S&P 500 is not cheap, trading at over 17 times those estimated 2021 earnings. The combination of pent-up demand, near-zero interest rates and large fiscal stimulus justifies an elevated valuation level, but future gains will come with continued volatility. 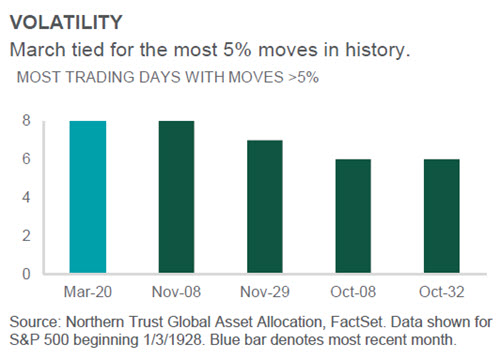 Global real estate has gained considerable attention during the recent downturn – down 27% versus the global equity decline of 19%. Generally, global real estate would benefit from falling interest rates relative to the broader equity market given its dependence on debt financing and its role as a yield alternative to fixed income. However, the benefit from falling rates has been more than offset by concerns over tenants paying rent. As such, we have seen material price reductions versus net asset value (the appraised value of the property less any debt). But has the price reduction been overdone?

The nearby chart shows current price as a percent of the net asset value (P/NAV) across the major segments of the real estate market (each representing approximately 10% of the asset class). Some are at historical lows (data going back to 1996). These include retail and office, while residential is not far off. Clearly, some properties will see a permanent impairment. Retail, already pressured prior to COVID-19, is one. Office may see some impairment as well. However, other segments should see a cyclical rebound and new segments (for instance, data centers) could see a rise. With an overall 73% P/NAV, we believe the asset class is attractive and maintain our overweight. 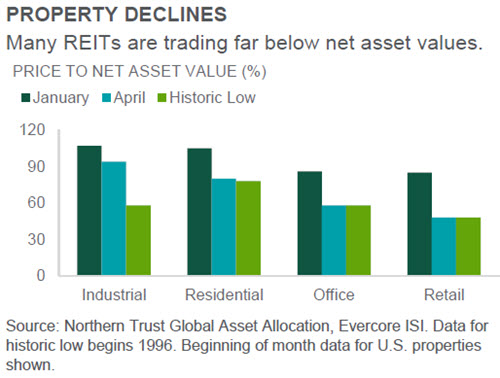 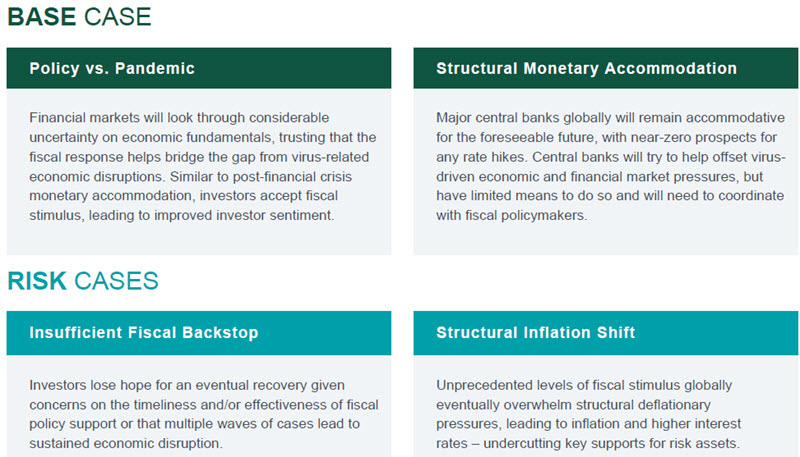