Keep up with how the latest headlines moved markets, and what’s up next.
SUBSCRIBE NOW
Investment Perspective, November 2020
November 11, 2020
PRINT

Because it could result in further fiscal stimulus without tax hikes, the split government is contributing positively to the growth outlook.

While results are still being finalized, it looks like the U.S. election has resulted in split government – a Democratic president, a likely-Republican Senate, and a Democratic House with a reduced majority. We think this scenario will be positive for the growth outlook as it could result in further fiscal stimulus without tax hikes. This past weekend, all of the major media organizations called the 2020 U.S. presidential election in the favor of former Vice President Joe Biden. The results in some states are still being finalized, and legal challenges are underway. The outlook for the Senate is less clear, as the two Georgia Senate races will go to a runoff for decision on January 5th. Our view is that Republicans will likely win at least one of these seats, leading to a Senate majority.

Several state ballot measures signaled a limited government sentiment, including rejecting the graduated tax proposal in Illinois and rejecting rent control and regulation of gig workers in California. Ballot initiatives liberalizing regulations on controlled substances passed in seven states, and those legalizing gambling passed in four. We had viewed the combination of a Democratic president, Republican Senate and Democratic House as the second-most likely of our four potential outcomes, but we rated it the most positive for economic growth. Legislative initiatives will need to be agreed to by both parties, and President-Elect Biden will need to have his cabinet approved by the Senate. Time will tell if the reported long relationship between Biden and Senate majority leader Mitch McConnell will facilitate cooperation.

Meanwhile, the U.S. economy continues to show improving trends. October job creation was solid, and the third quarter earnings reports have been better than expected, leading us to nudge up our 2021 earnings estimates. The jump in COVID-19 cases globally remains a near-term concern, but this concern is overshadowed by the recent news on the 90%+ efficacy of the Pfizer coronavirus vaccine. Growth in the European services sector has been hit by increased lockdowns, while the continued strong rebound in China is underpinning solid growth across Asia. We increased the recommended tactical risk in our global policy model this month as increased policy clarity has emerged and the economy continues to adapt to the pandemic. Near-term, we are watching the risk of a fiscal shortfall as the prior stimulus has mostly run out and the path to the next plan is unclear. In the meantime, hopeful news on the outlook for COVID-19 vaccines (from Pfizer and other companies) is underpinning continued momentum in risk markets.

The Treasury market has largely ignored the pandemic resurgence, instead choosing to focus on politics. As the presidential election approached, the treasury curve bear steepened (long-end yields rose faster than short-end yields), a potential sign of increasing inflation expectations. This pricing action indicates that market participants may have been pricing in the potential for a Blue Wave, which would have likely led to significant fiscal aid. As election results unfolded, a Blue Wave appeared unlikely to materialize, sending Treasury yields lower.

Both 10-year and 30-year bonds broke out of their tight pandemic ranges, experiencing the largest monthly gains this year. Since October, the 10-year and 30-year rose 20 and 21 basis points (bps), respectively, which is uncharacteristic given the recent equity market sell off. Typically, an equity sell off suppresses yields as investors look to safe haven assets. Although the 10-year (0.9%) and the 30-year (1.7%) moved higher during the month, they are still trading well below their pre-pandemic levels of 1.5% and 2.0%, respectively. We expect this “below normal” rate environment to persist. And, as such, we remain modestly overweight duration. 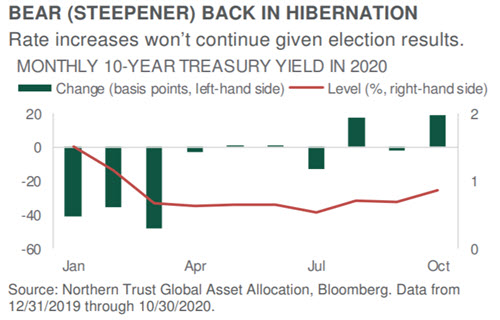 Year-to-date issuance of senior secured bonds (as a percentage of total high-yield bond issuance) has surpassed elevated levels in 2019 and is nearing the record 2009 level. This increase in issuance is driven by two primary factors. First, during the depths of the crisis, many companies could not access primary markets with unsecured bonds. Securing bonds with high-quality collateral allowed riskier issuers to access fresh financing, enabling them to term out maturities and bolster liquidity to manage through the crisis. The second driver was a shift in investor preferences towards fixed-rate securities over floating-rate securities. As it became increasingly clear that the Fed will remain accommodative and policy rates will remain near zero for the foreseeable future, demand for floating-rate products waned.

Previous loan-only issuers have looked to tap high yield markets with secured, fixed-rate bonds as demand for loans has declined and inflows into high yield have been robust. The increase in senior secured issuance has provided an opportunity to invest in differentiated bonds with high-quality collateral at lower leverage, particularly in the sectors most impacted by pandemic shutdowns where longer-term prospects are still favorable. 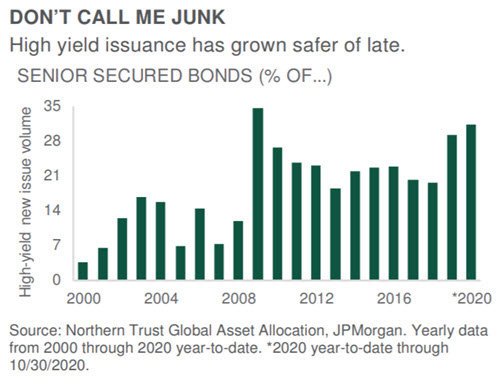 U.S. equities are responding favorably to the expected divided government, including the prospects for a status quo tax environment. Still, the unexpected outcome is creating some winners and losers. Republican Senate control is expected to act as a governor on fiscal spend, impacting cyclical sectors, while a lessening of the prospects for inflation is bringing down long-term interest rates – hurting banks and benefiting growth areas like big tech. The election outcome should allow for the market to think less about politics and more about fundamentals – where we continue to see improvement.

We modestly boosted our 2021 U.S. earnings outlook this month, though we lowered it in Europe. Earnings expectations for 2021 collapsed similarly across regions through April, though the U.S. and emerging markets have shown an improvement while developed ex-U.S. has been largely flat. Third quarter earnings are coming in materially better than expected. While the U.S. market is expensive relative to history, we increased our exposure to U.S. and emerging market equities to neutral. This reflects our view that looks beyond the current increase in coronavirus cases and toward an effective vaccine, as well as a clearer political environment in the U.S. 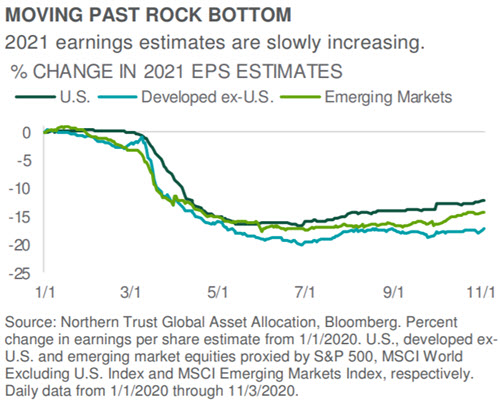 After a benign summer, opposing forces have been playing a game of tug-of-war with oil prices. Rising coronavirus cases have been battling hopes that governments will take a more balanced approach to future lockdowns, balancing the need for health safety with economic activity. Secondly, while the U.S. election outcome – specifically expectations for a divided government – was great for stocks broadly, it may represent some challenges for natural resources specifically. We likely won’t get the large (~$2.2 trillion) stimulus Democrats were aiming for; instead, we will probably receive increased regulatory burdens. This combination is less-than-ideal for the energy complex.

Nevertheless, we maintained our natural resources tactical positioning at neutral in the global policy model. While the micro environment for the asset class looks a little worse, the macro environment looks a bit better. Most importantly, investors are feeling more comfortable with the medium-term pandemic trajectory. Also, while there is a real threat of deregulatory unwind, the political policy backdrop could have been worse with a “blue sweep”. Overall, we maintained our allocations within real assets – currently preferring global listed infrastructure for its nice yield and downside mitigation properties. 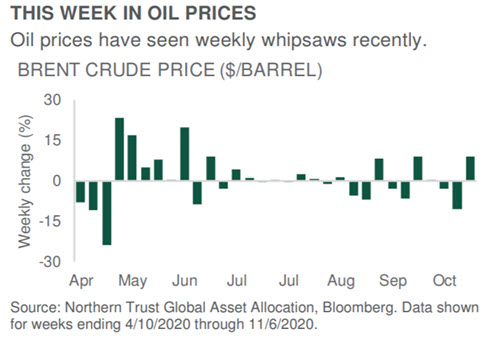 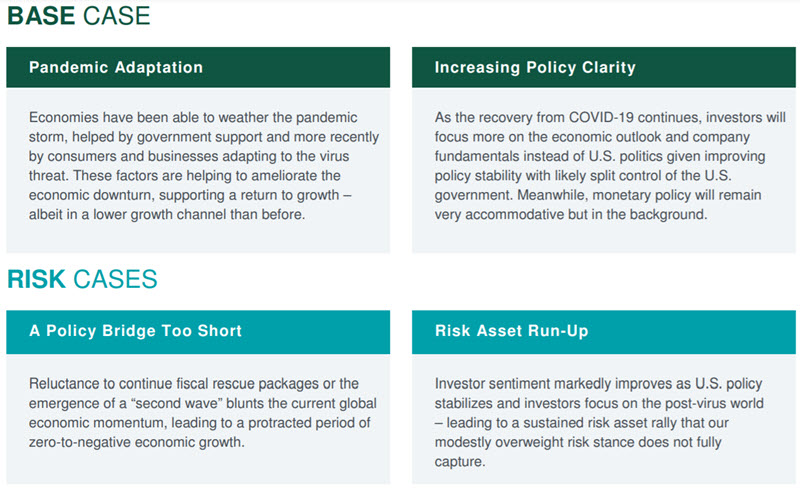