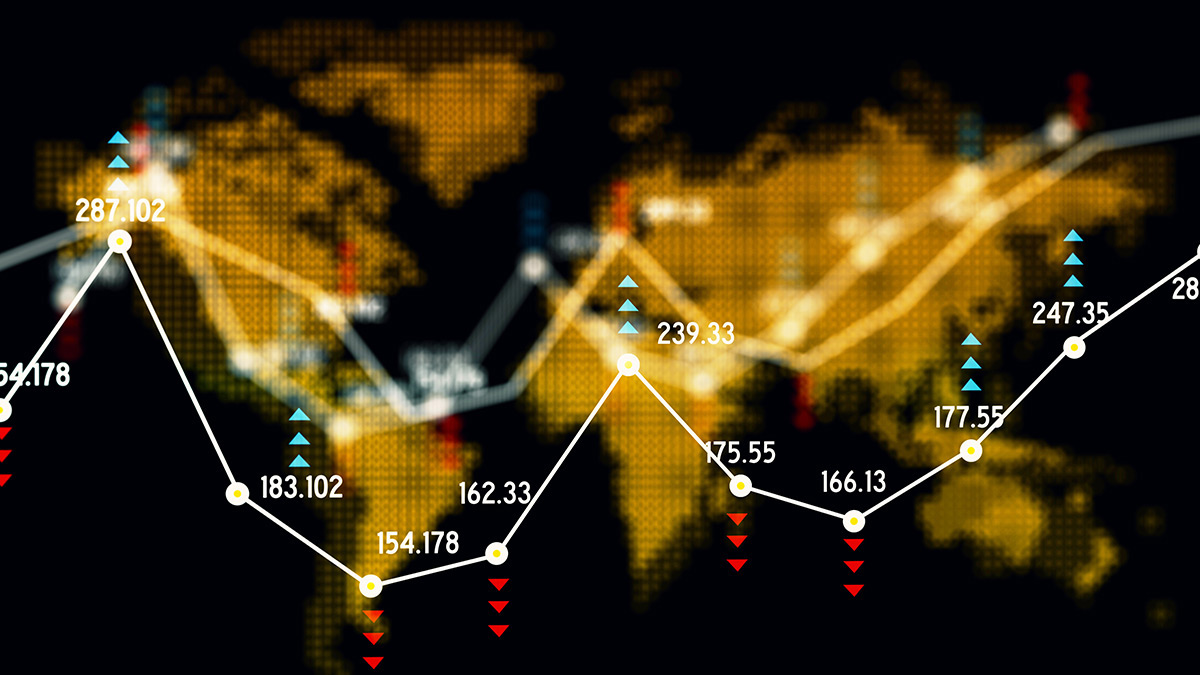 Global central banks began raising rates or became significantly more hawkish as energy prices spurred inflation that the banks tried to reel in. Entering the quarter, the market had expected inflation to begin to moderate back toward 3% as judged by inflation-related breakeven rates. Initially we forecasted a flat yield curve with the two- year Treasury around 1% and the 10-year at 1.75%. Global events changed that narrative quickly. We now forecast the two-year Treasury yield with a central tendency of 2.75% and the 10-year Treasury at central tendency of 2.50% with the actual rate hikes front- loaded. Historically, the 10-year yield has not risen above the previous Fed funds peak (2.50% in 2018 for example). As the market searches for an elusive “neutral rate” that is neither accommodative nor restrictive, rate volatility may persist in the front end while the longer maturities should stabilize around the long run economic growth rate.

Central banks turned more hawkish as global inflation intensified. In the U.S., the Federal Reserve hiked interest rates by 25 basis points in March for the first time since 2018. The Federal Open Market Committee (FOMC) continuously repeated their pledge to maintain price stability and implied that rate hikes may be faster and more frequent than previously expected.

The Fed’s “dot plot” showed that the median committee member expects to hike at each of seven meetings this year, up from three forecasted in December 2021. This suggests the Fed will pursue a restrictive policy, with the rate reaching 2.75% in 2023, which is above the FOMC’s long run estimate of 2.375%. Additionally, the FOMC signaled the potential for a 50 basis point hike at some point this year, and some on the committee wish to see 3% by year-end. Over the next six months, we believe the FOMC will increase interest rates six times to 1.875%, matching market expectations. Our 2.75% target for the two-year Treasurys is indicating a terminal fed funds of 3%, also near market consensus.

As investors expected, the Bank of England (BoE) hiked rates twice this quarter, its third consecutive meeting with a hike. BoE’s rate is now 0.75%, up from 0.25%, and the market closed the quarter with almost six more hikes expected this year versus an expectation just under four hikes at the beginning of 2022. The European Central Bank (ECB) also shifted their stance, becoming more hawkish and data dependent. The decision to end net purchases in the ECB’s asset purchasing program increased the market pricing of hikes this year. The Reserve Bank of New Zealand also voted to move interest rates higher by 0.25%. 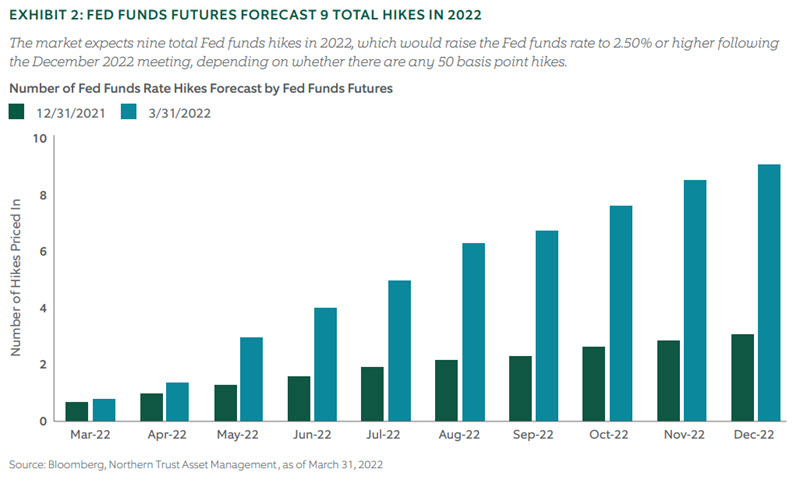 Before the Russia-Ukraine conflict, the money market fund industry had generally been shortening its weighted average maturities as it prepared for rate hikes. As the market digested hawkish Fed commentary and repriced the speed and number of rate hikes, there was a strong preference for floating rate paper over fixed rate securities. As announced in the most recent FOMC minutes, it appears that balance sheet reduction will be announced as early as the May 2022 meeting, and the reduction is expected to run more rapidly than during 2017–2019. We remain focused on principal preservation, liquidity and yield, with particular attention on liquidity across our portfolios to accommodate any unexpected outflows. We still do not expect the usage of the Federal Reserve’s Overnight Reverse Repo Facility (RRP) to drop meaningfully until the balance sheet normalization process is well under way. Therefore, there will continue to be a supply/demand mismatch, and short government paper will likely continue to trade at or below the RRP rate.

Following the initial shock of the war in February, one- to three-year credit spreads widened. However, sentiment improved by the second half of March, and 1-3 year option adjusted spreads ended the quarter at 59 basis points, 17 basis points wider for the first quarter1. We remain neutral to duration and risk and are closely watching the path of monetary policy.

The Treasury market was volatile as rates moved rapidly higher. The move to multiyear- high interest rates was caused by inflation, a hawkish Fed and thin liquidity. The FOMC delivered its first interest rate hike since 2018. Despite the move higher, the curve moved from flat to inverted, meaning shorter maturities offer a higher yield than their longer counterparts. Although some investors believe curve inversions are the proverbial “canary in the coal mine” for recessions, we believe it is more reflective of the future path of monetary policy. The yield curve’s shape tells investors that the FOMC is likely to raise rates in the near term, but inflation and growth will return to a more moderate level over the longer term. TIPS break-evens continuously moved higher through the quarter.

Investment grade corporates sold off due to the rapid rise in Treasury yields. Credit spreads widened, making lower quality investment grade bonds underperform their higher quality investment grade peers. The market volatility caused corporates to issue bonds at a start-stop pace throughout the quarter. Despite higher rates, corporate issuance of $453 billion was on par with the first quarter of 2021. Almost one-third (31%)1 of bonds issued were between 10 and 30 years as corporate borrowers tried to lock in debt before funding costs continued to rise. Furthermore, new issue concessions — the additional yield investors receive on newly issued bonds relative to their previously issued counterparts — are roughly 4.5 times higher2 than in 2021. This suggest that investors believe there are more risks than before the current valuation of newly issued securities. U.S. corporate spreads moved 23 basis points wider on the quarter, but fundamentals of the asset class remain strong. We continue to have a positive outlook on investment grade.

Pivoting to Europe, both euro and sterling investment grade credit were hurt by the Ukraine conflict’s impact on economic growth and already-high inflation in the region. As a result, spreads widened throughout the quarter, with option adjusted spreads reaching 159 basis points on March 15, the highest we have seen since the pandemic’s onset, before closing the quarter at 128 basis points1.This produced a 4.84% loss for the quarter, with BBB leading the way (-5.43%) versus AA ( 3.65%). First-quarter issuance remained robust and consistent with what we have seen in recent years, with €95 billion in new deals. Sterling credit experienced the same dynamics but also with an active BoE tightening monetary policy, including the announcement they plan to sell their corporate bond portfolio from their asset purchase program. Details of the sale process of the £20 billion portfolio are due to be announced in the second quarter and are designed to not disrupt the functioning of the sterling investment grade corporate market. Sterling investment grade spreads widened over the quarter to close at 147 basis points, up 34 basis points from the start of the year and producing a 7.23% loss. Sterling new issuance for the first quarter was the lowest since 2018, with just £7 billion of new deals.

U.S. high yield credit was one of the best performing asset class within fixed income, as it is less affected by interest rates than other sectors. Treasury market volatility and broader risk-off sentiment slowed the issuance of high yield bonds. First-quarter issuance had its slowest start since 2016, with issuance slightly above $43 billion. The lack of new high yield bonds created a floor for high yield valuations, despite continuous flows out of the asset class. The uncertain geopolitical backdrop caused option adjusted spreads to widen 42 basis points over the quarter. The asset class continues to benefit from the improving economy, which helped the default rate fall to 1.2% in February, a multiyear low. We continue to have a positive view of the fundamental backdrop for high yield, focusing on the mid-range of the credit quality spectrum to capture potential spread compression.

Similar to its U.S. counterpart, euro high yield corporate issuance ground to a halt, with issuance of only €14 billion during the quarter. This was the slowest start to the year since the first quarter of 2019. Additionally, the asset class saw outflows of roughly €4 billion. Option adjusted spreads widened 76 basis points over the quarter, largely affected by the same factors as the U.S. high yield market. 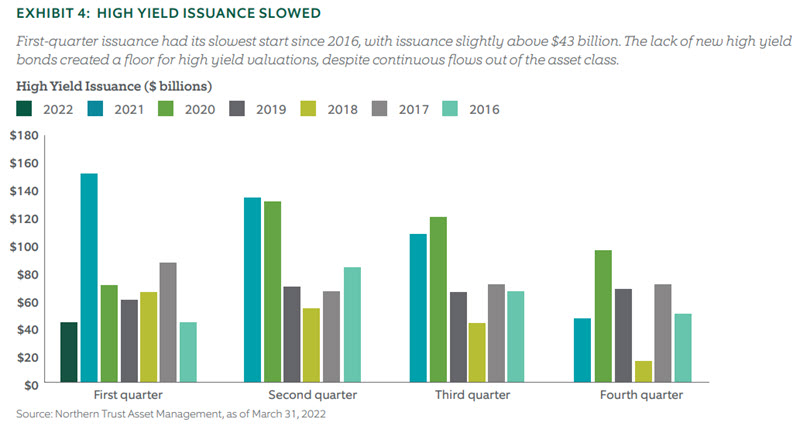 The flattening yield curve helped relative performance versus most indices. Shorter mandates generally outperformed their longer counterparts, but returns were negative across the board. AAA credits outperformed BBB credits by 100 basis points, as credit and coupon spreads widened from their tightness at the end of 2021. Higher credit quality and higher coupon holdings aided performance.