Investors tried to strike a balance between higher rates and the rising risk of recession, which combined to spark volatility in the third quarter. 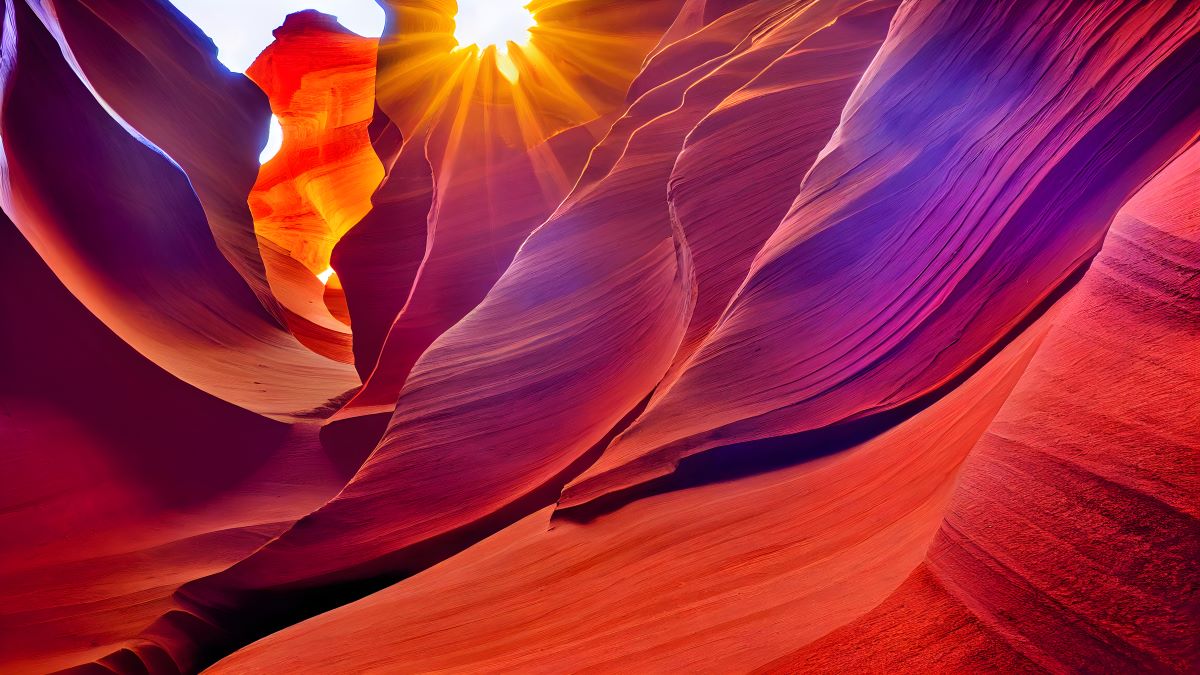 Global central banks’ strong resolve to fight inflation intensified. Although central bankers acknowledged that their economies will likely suffer, they increased the pace and magnitude of rate hikes. As inflation remains sticky, we expect central banks to prioritize lower consumer prices over economic growth or financial market stability, unless the economy deteriorates significantly. With more rate hikes likely, we’ve raised our yield expectations. We think global economic growth will decline, and we see a 50/50 chance of U.S. recession in the next 12 months.

Bonds globally produced losses in the third quarter, driven by aggressive central bank rate increases. Investors tried to strike a balance between higher rates and the rising risk of recession, sparking volatility in the quarter. We increased our six-month forecast for the two-year Treasury yield to 4.75% from 3.50% and our 10-year yield forecast to 4.00% from 3.00%, as surprisingly high inflation and solid gains in the labor market supported further rate hikes by the Federal Reserve. 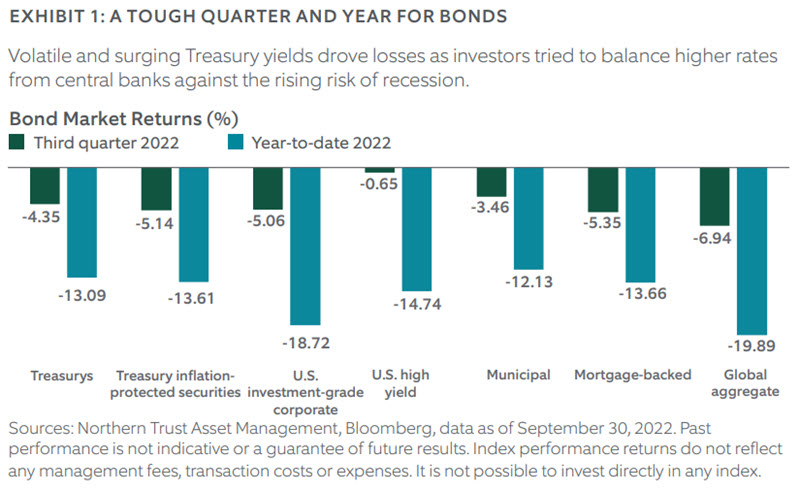 Global central banks, emboldened by positive economic data and high inflation, reinforced their resolve to cool inflation and slow their economies. The Fed’s Federal Open Market Committee unanimously voted to raise rates by 0.75% at both the July and September meetings, ending the quarter at a target range of 3.00% to 3.25%. Inflation continued to surprise to the upside and the labor market remained tight, enabling the Fed to boost rates 0.25% more than initially expected in the quarter. The Fed’s “dot plot” survey of committee members’ federal funds rate expectations shows a year-end 2022 median of 4.4%, 1% higher than the expectation in June, signaling more hikes to come through the rest of the year.

The Bank of England raised its base rate by 1% to 2.25% during the quarter, via two 0.5% hikes while unanimously voting to initiate in October quantitative tightening, or the selling of bonds into the market to increase yields. However, as the quarter closed, investors aggressively sold gilts and market function deteriorated in response to unfunded tax cuts announced by the U.K. government. Forced to intervene, the bank instead purchased gilts to shore up liquidity and delayed the start of quantitative tightening. By the end of the quarter, market participants expected a year-end main financing rate of 4.6%, up from a 2.8% forecast at the end of June.

The European Central Bank in July increased its main policy rate 0.5%, its first hike since 2011, and then in September delivered its largest single hike ever of 0.75%. These moves set the rate back to positive territory at 0.75%. Importantly, the bank signaled an increased pace of hikes with greater magnitude despite risks to financial stability brought on by the Russia-Ukraine war and the related energy crisis. Several other developed market central banks also increased the pace and magnitude of their rate hikes, often by 0.75% to 1%, potentially increasing risks to their economies. 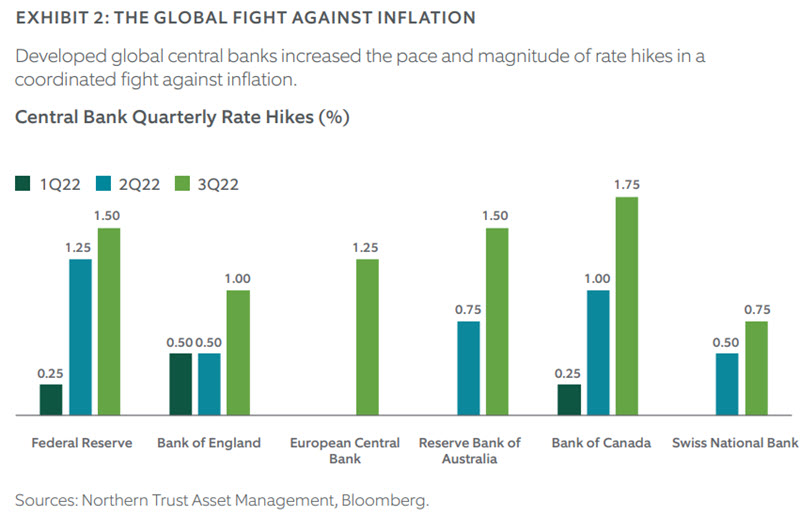 The “higher-for-longer” chorus on interest rates harmonized with “hard landing” recession fears, leading to a dramatic inversion of the Treasury yield curve. The two-year/10-year curve flattened 51 basis points, hitting an inversion of 53 basis points intra-quarter, a level last experienced in April 2000. This suggests that investors believe the Fed will continue to raise short rates while potentially creating a recession. Higher yields accompanied the most volatility since the COVID-19 pandemic and the Global Financial Crisis in 2008. Treasury inflation-protected securities (TIPS) experienced similar volatility, responding to stronger economic data including solid non-farm payrolls and higher-than-expected inflation. 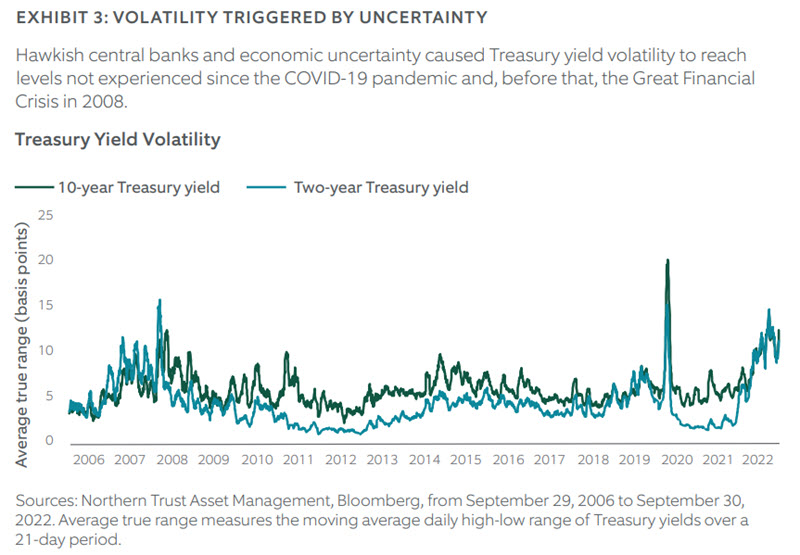 Treasury bill issuance remained low during the quarter while investor demand for short-term bonds increased to take advantage of higher rates, creating a supply-demand mismatch. With the imbalance, money market funds turned to the Fed’s Overnight Reverse Repo Facility, which offers a higher yield than the market on overnight paper, to set a new record balance of $2.4 trillion on September 30. This reflects investors’ high cash balances and of lack of liquidity in the market. Without the facility, rates would likely drift meaningfully lower. We do not expect facility usage to drop meaningfully until the Fed balance sheet normalization process is well under way. Until then, we think there will be a lack of supply of Treasury bills to meet the demand of money market funds holding high cash balances. As we think the supply/demand mismatch will continue, short government bond yields will likely continue to trade at or below the repo facility’s rate.

The Bloomberg U.S. Corporate 1-3 Year Index lost 1.23% for the quarter, outperforming the intermediate and long corporate index thanks to their shorter duration as rates rose. Spreads on 1-3 year credit tightened 4 basis points during the quarter, albeit not linearly. As markets priced in more aggressive central bank action, the 1-3 year segment widened from mid-August into quarter-end, nearly wiping out the compression earned early in the quarter. 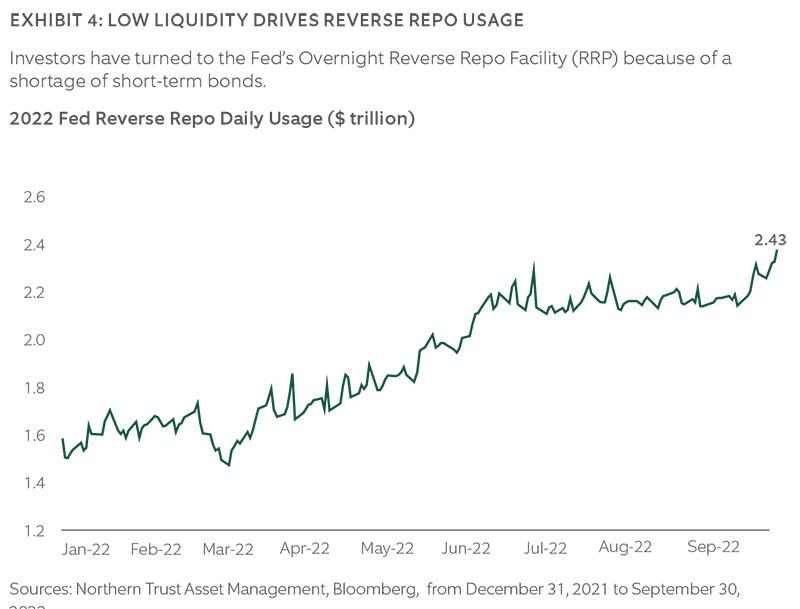 U.S. investment grade spreads tightened 24 basis points through mid-August before widening 28 basis points into quarter-end, ending up 4 basis points higher for the quarter. Bonds across the investment grade credit ratings spectrum experienced losses, led by bonds rated AA (-5.4%). The broader economic backdrop and higher interest rates deepened the decline in investment grade corporate issuance. High grade companies issued $287 billion worth of bonds in the third quarter versus a five-year third quarter average of $323 billion. By the end of the quarter, there were 59 days with zero new issuance, the highest ever through the first three quarters of a year.

In Europe, positive economic data and light bond issuance pushed spreads broadly lower during the first half of the quarter, but reversed course in August as sentiment deteriorated. Soaring gas prices in the U.K. and the ongoing energy supply crisis in the region drove the consumer price index higher in the U.K. and Germany and weighed on growth expectations. Inflation in the U.K. and Germany hit all-time highs during the quarter, with eurozone inflation at 10%. The Sterling Corporate Index option adjusted spread ended the quarter 26 basis points higher, and the Euro-Aggregate Corporate Index option adjusted spread increased 7 basis points during the quarter.

U.S. high yield bonds performed the best among fixed income sectors, largely supported by the lowest quarterly issuance of new high yield bonds since the first quarter of 2009. Investors holding high cash balances took advantage of the relatively attractive entry point to deploy cash in the absence of new issuance. High yield spreads, like those for investment grade bonds, seesawed during the quarter, but in the end declined by 17 basis points for the quarter. CCC-rated bonds, with less sensitivity to interest rates, performed best versus other credit ratings, recouping some of their second quarter loss.

The European high yield market slowed even more in the third quarter, with just €2.9 billion issued by the end of the quarter. This brings year-to-date issuance down 80% versus 2021 and 70% lower than the five-year average. Facing supply constraints similar to the U.S., the euro high yield credit spreads fell 22 basis points, ending the quarter at 628 basis points. Euro CCC-rated bonds were also the best performers, returning 0.76% versus a 0.96% loss for the broad euro high yield Index. Having said that, the rise in risk-free rates has meant that yields ticked up 70 basis points over the period, negating the income earned by CCC-rated bonds. 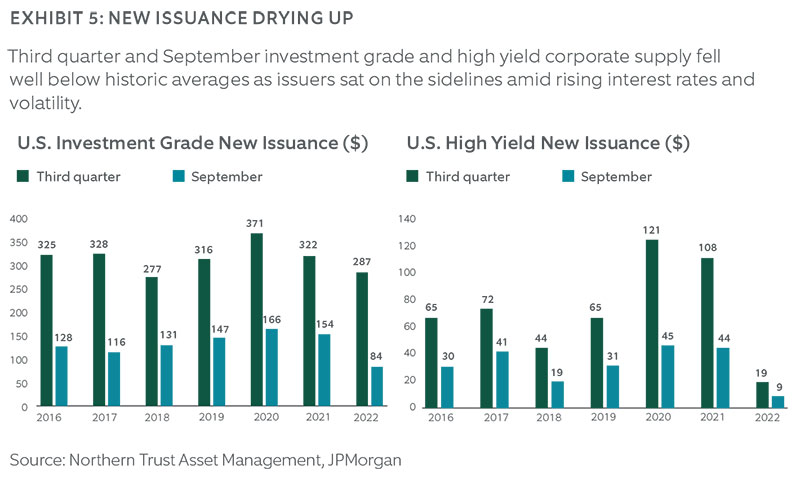 Hawkish central banks, recession concerns and market volatility drove a 5.20% loss in structured products. Mortgage-backed securities, representing more than 90% of the structured products index, lost 5.35% in September alone, the worst month in over three decades. Mortgages underperformed Treasurys while the yield spread over Treasurys increased 42 basis points to 69 basis points during the quarter, the highest since 2010. Lower coupon mortgages fared the worst during this period.

Municipal bonds lost 3.46% for the quarter as mutual fund investors sold on worries over rapidly rising interest rates. However, demand increased among institutional buyers, including banks and insurance companies, as after-tax yields became more attractive versus yields on corporate bonds. The 3.84% loss in September was the worst month since the pandemic-induced selloff of March 2020. Short-and intermediate-term municipal bond yields climbed to their highest since 2007, while 30-year yields reached the highest since 2013.

Overall supply continued to shrink compared to the beginning of the year and 2021. Low supply is typically positive for returns, but selling pressure mounted through the end of the quarter and overwhelmed the positive technical environment. Mutual fund outflows totaled $3.5 billion during the last week of September alone, bringing the year-to-date total to $91.5 billion through the end of the quarter, the most since 1992. The third quarter selloff left most AA-rated bonds relatively more attractive. The winding down of record U.S. government economic stimulus, slowing economic growth and an aggressive Federal Reserve is fueling concern about slower revenue growth and deteriorating pension funding levels among states, which issue municipal bonds. We remain biased to higher rated credits and sectors, particularly state and local general obligation bonds, along with higher coupon bonds.

IMPORTANT INFORMATION. For Asia-Pacific markets, this information is directed to institutional, professional and wholesale clients or investors only and should not be relied upon by retail clients or investors. The information contained herein is intended for use with current or prospective clients of Northern Trust Investments, Inc. The information is not intended for distribution or use by any person in any jurisdiction where such distribution would be contrary to local law or regulation. Northern Trust and its affiliates may have positions in and may effect transactions in the markets, contracts and related investments different than described in this information. This information is obtained from sources believed to be reliable, and its accuracy and completeness are not guaranteed. Information does not constitute a recommendation of any investment strategy, is not intended as investment advice and does not take into account all the circumstances of each investor. Opinions and forecasts discussed are those of the author, do not necessarily reflect the views of Northern Trust and are subject to change without notice.

This report is provided for informational purposes only and is not intended to be, and should not be construed as, an offer, solicitation or recommendation with respect to any transaction and should not be treated as legal advice, investment advice or tax advice. Recipients should not rely upon this information as a substitute for obtaining specific legal or tax advice from their own professional legal or tax advisors. References to specific securities and their issuers are for illustrative purposes only and are not intended and should not be interpreted as recommendations to purchase or sell such securities. Indices and trademarks are the property of their respective owners. Information is subject to change based on market or other conditions.

All securities investing and trading activities risk the loss of capital. Each portfolio is subject to substantial risks including market risks, strategy risks, adviser risk and risks with respect to its investment in other structures. There can be no assurance that any portfolio investment objectives will be achieved, or that any investment will achieve profits or avoid incurring substantial losses. No investment strategy or risk management technique can guarantee returns or eliminate risk in any market environment. Risk controls and models do not promise any level of performance or guarantee against loss of principal. Any discussion of risk management is intended to describe Northern Trust’s efforts to monitor and manage risk but does not imply low risk.