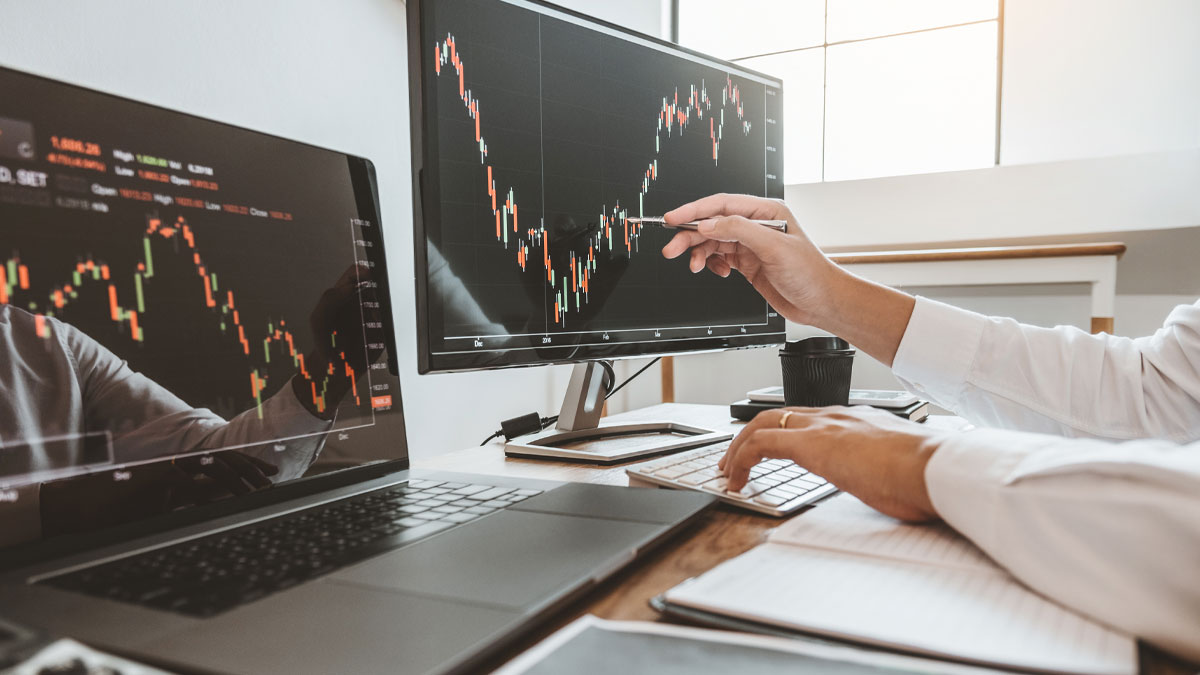 Editor’s Note: This week, we reflect on the biggest stories we’ve covered so far in 2022.

Three years ago, the business press was trumpeting its demise; today, inflation is back with a vengeance. The hand-wringing over how this happened has occupied copious amounts of time in both the private and public sectors. It has also occupied a lot of space in our commentaries during the first half of 2022.

A central contributor to the surge in inflation has been the pandemic, which severely limited the supply side of the world economy. Production chains tangled, workers left the labor force and capacity in many industries was taken out of service for want of demand. Conditions on all three fronts have improved, but still stand at a deficit to pre-COVID levels.

On the demand side, fiscal stimulus enacted to backstop consumers and businesses proved excessive. The accumulation of savings fostered a surge in spending and dulled price consciousness. Saving rates have returned to normal levels, but there remain large pools of unspent funds that support consumption.

Initial indications of resurgent inflation were dismissed as transitory. And indeed, the prices of some items that surged during the early phase of the recovery have leveled off. But as time has passed, the prices of more and more goods and services have increased by outsized amounts. The broadening of inflation suggests systemic, not idiosyncratic root causes. 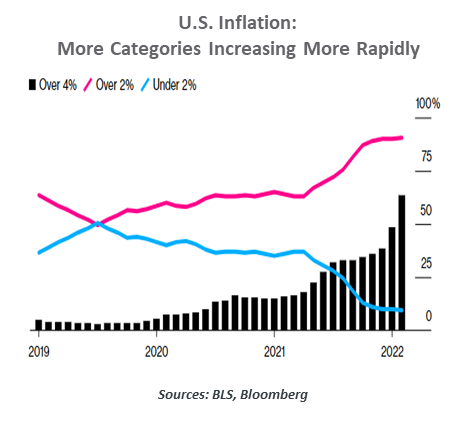 Analysts (like us) have been calling for inflation to peak several times in the past eighteen months, only to be proven wrong. The war in Ukraine certainly complicated matters; its impact on food and energy prices has been significant.

Where do things go from here? It may not be a popular opinion, but inflation could cool significantly in the year ahead. Energy prices are moving past their peaks, shipping costs have fallen sharply and monetary policy is rapidly becoming more restrictive. The power of firms to pass along cost increases may be diminishing. Medium term inflation expectations, while slightly higher, have not become unmoored.

Uncertainty about inflation remains high, and that is not helpful to economic and market progress. We suspect that this topic will remain front and center, and feature prominently in the year-end recap we will file six months from now.

First In, Last Out

As we began the year, most international observers assumed that China had passed the worst economic and medical phases of the pandemic. The nation was “first in” to contagion and shutdowns, and was the “first out,” recovering from COVID-induced disruptions to economic activity. But the Omicron variant and Beijing’s uncompromising zero-infections approach changed the equation.

Taming the virus has prompted rolling lockdowns across China for much of the first half of the year. In March, around 40% of the nation’s gross domestic product, or an estimated 25% of the population covering over 40 cities, was in full or partial lockdown. The strategy has created societal and economic consequences: the restrictions have given rise to public protests and depressed consumer sentiment. Less effective domestic vaccines, coupled with low natural immunity, leaves the Chinese population very vulnerable to infection. 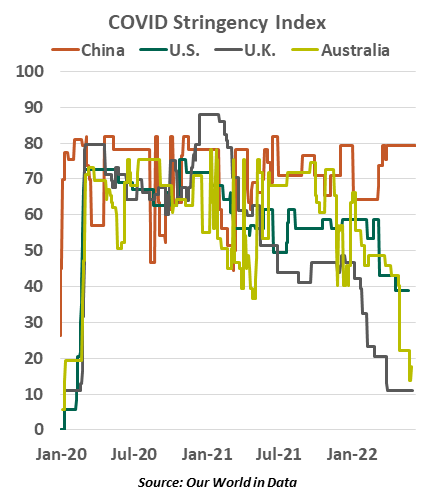 Stringent controls have caused significant interruptions in industrial activity and crippled transportation, piling more pressure on an economy that was already struggling with a real-estate downturn and a regulatory reset. Faced with an uncertain economic outlook, households have been cutting back on spending, which would worsen the slowdown.

The dislocations have created consequences well beyond China’s borders, showing up everywhere from German workshops to Australian tourist hotspots. Foreign businesses have struggled in securing supplies from China, leading to shortages, delays and higher costs.  Frequent disruptions in China are one of the factors behind high inflation, the reaction to which might push the world economy into a recession.

The stop-start restrictions have added to the case for diversifying supply chains. Multinationals are either reevaluating their future in China or putting on hold plans to add new capacity. In some cases, they have already begun to move production away.

China’s zero-Covid policy may have succeeded in containing the spread of the Omicron variant, but it has been harsh medicine for the world economy.

Everywhere you looked, off-kilter labor markets were a leading challenge for the economy in 2021. Jobs were ample, but the supply of labor to fill them was lacking. Year to date, workers have returned to the labor market in substantial numbers, but shortages remain.

The COVID recovery turned typical labor dynamics upside down. In past recessions, job destruction led to swarms of displaced workers seeking to fill scarce openings. In this cycle, employers were ready to hire faster than employees could be found. No single story could explain the disconnect; a variety of factors led to dislocation, many of which are close to resolution. 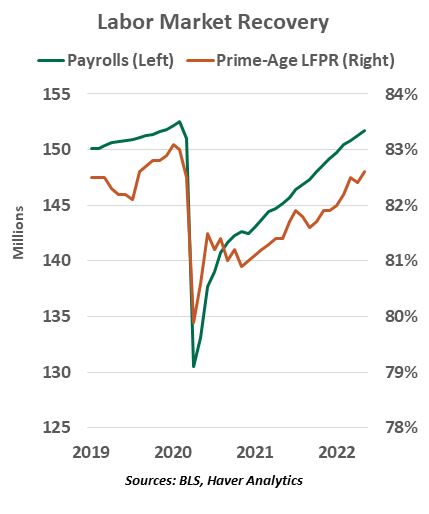 As of this writing, payroll employment is less than one million jobs shy of its February 2020 peak, and labor force participation is recovering. But there remain imbalances that will have to be resolved. We’ll be watching the job market closely, as always.

History has taught us that war rarely delivers permanent solutions for any issue, and may lay the foundation for another set of lasting problems. Russia’s invasion of Ukraine isn’t going be any different. Not only has it led to massive humanitarian and economic losses, but the ripple effects are being felt by many who are not even remotely connected to the conflict.

Commodities markets, especially for energy and food, have been roiled by the ongoing war. Both Russia and Ukraine are major exporters of wheat, sunflower oil and corn. The antagonist is also an important producer of key industrial metals such as palladium, titanium and aluminum.

Disruptions in supplies of products in which both countries have significant market shares have added to lingering supply chain woes, weakening growth prospects. Europe has been the most vulnerable region, not only because of the geographical proximity to the war but also because of its energy reliance on Russia. Replacing the flow of natural gas from the east will require new sources and pipelines, which will take years to develop.

The conflict has led to a new wave of protectionism. Desperate to ensure adequate domestic food supplies, governments have either banned exports of essentials or raised new barriers. As a result, food has become more expensive and harder to come by. Food insecurity can lead to major uprisings, while famine in developing economies looms large and must be avoided at all costs. 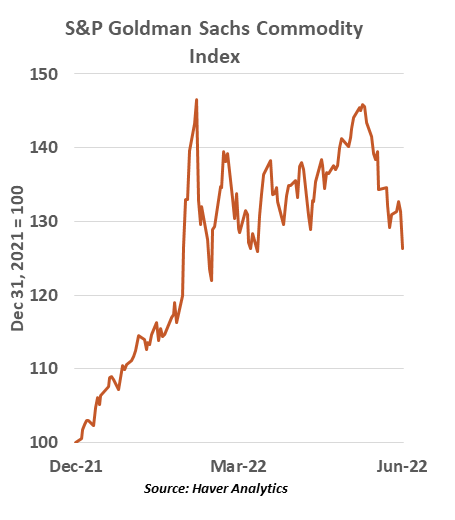 The war is no longer a sore point just for businesses and households. It has made policymaking more complex. Higher energy and food prices are also delivering bad news for emerging market public finances, already under strain amid the rising interest rate environment. Substantial policy support will blunt the fight against inflation, while sitting on the fence amid the cost-of-living crisis draws the population’s ire.

Sanctions have not achieved the desired outcome of forcing Moscow to back down. With a durable truce nowhere in sight, volatility and uncertainty surrounding the conflict will remain the norm for some time to come.

Central banks around the world are chartered with containing inflation. In that, they have been less than successful.

It is certainly fair to observe that factors beyond the control of monetary policy have been major contributors to the problem. There is little that interest rates can do to lower global shipping costs or resolve the war in Ukraine. But waiting for these conditions to clear is not an attractive option; as workers incorporate higher costs into their wage demands, temporary shocks can become more permanent.

Central banks were slow to recognize the problem, and therefore slow in taking actions to correct it. But as this year has progressed, they have become more aggressive. Gradual strings of quarter-point adjustments have been ditched for larger steps. Quantitative tightening has been initiated in many countries. We haven’t seen a tightening program of this speed and breadth in more than 40 years.

Each market’s circumstances are different, and there isn’t a contest among central banks to see who can be most restrictive. But the jump in American interest rates has been far larger than it has been in other markets, and the tone of communication from the Federal Reserve has become the most hawkish. This has had a profound impact on market performance and foreign exchange rates. 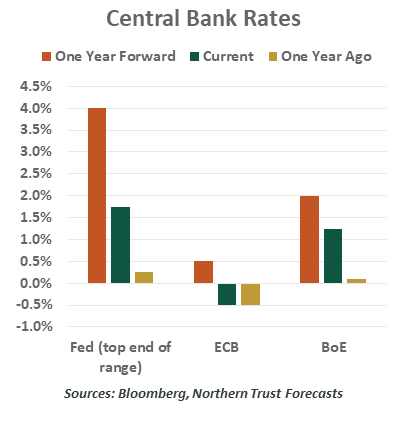 A year ago, observers began criticizing central banks for being too complacent. Today, the concern is that they are on track to becoming too restrictive. Overly tight monetary policy could cause a recession, which could cause inflation to overcorrect.

Leaders of the major central banks have to talk tough to contain inflation expectations. But if inflation settles naturally and economic conditions soften, let’s hope that there is room in their rhetoric and their interest rate policy for a mid-course correction.

Worries about inflation have lately given way to a new concern: Fear of an imminent recession, or even speculation that one is already underway.

The reasons to feel economic gloom are readily apparent. Persistently high food and energy prices are making consumers feel inflation with every routine purchase. A correction across financial assets has stung investors. Two years into reopening, businesses still struggle to fill all available vacancies. Nearly all pandemic support programs that boosted incomes last year have concluded, and wage gains gave not kept pace with broader inflation measures. Together, these factors are driving leading indicators and surveys of sentiment to new lows. 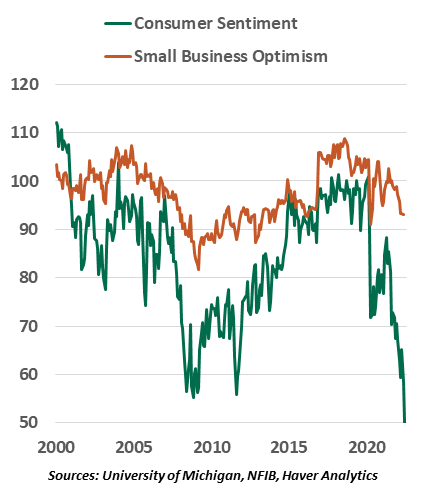 However, grim survey responses don’t account for hard data showing that the economy is generally faring well, especially in the U.S. Labor markets are running hot, offering ample opportunities for workers to re-enter or advance to new, better-paying positions. Consumers continue to spend, and businesses continue to invest and rebuild their inventories. These are foundational drivers of economic growth, and all the challenges facing the economy have yet to stop this strong growth momentum. Risks of contraction are higher elsewhere in the world where spending has not retained strength.

In sum, these trends suggest that the economy is not in a recession. But the word “recession” is standing in for a general sense of economic dissatisfaction. Inflation and higher interest rates are eroding consumers’ spending power, while supply and labor shortages curtail the availability of goods and services that people want to purchase.

If a recession does come, it is helpful to keep in mind that many of them are short and shallow. Losses of national income and employment are modest in these circumstances. If that is the price that is to be paid for settling inflation for the long term, it might very well be worth the cost.