In which sectors do we expect risk to be rewarded?

Financial markets are discounting mechanisms, and the global equity markets are currently discounting an improvement in growth as 2019 unfolds. The global rally in 2017 correctly anticipated the improvement in growth and earnings in 2018, while the market weakness in the later part of 2018 foreshadowed the current global economic slowdown. Since late December, however, markets have begun to price in better growth in countries such as China (Shanghai Composite up 24% ytd), Europe (Stoxx Europe 600 up 13% ytd in local currency) and the U.S. (S&P 500 up 13%). Within the U.S. market, companies with high international sales are outperforming those with a domestic focus by 6% this year and global cyclicals are outperforming defensive shares by 3%. The worrying signals from the credit markets late last year have also reversed, with spreads on investment grade and high yield bonds narrowing significantly.

While we weren’t worried about the state of the credit markets, we did think investors were too optimistic about growth during 2018. The significant downgrade in optimism in the fourth quarter led us to upgrade our expectations for U.S. and emerging market growth in January. Is economic data accumulating that illustrates a growth pickup in 2019? Some evidence of improvement exists in the U.S., while the jury is still out for European and Chinese growth. The U.S. picture is hardly bulletproof, as highlighted by the weak February payroll report (job gains of just 20,000 compared to a 209,000 monthly average over the prior year). But other measures of the job market, including surveys of businesses, show more resilience. We haven’t been expecting improvements to European and Chinese growth until the second half of 2019, so the current soft data isn’t too surprising. Nevertheless, signs of stabilization will be a necessary support to the improved risk environment realized so far this year.

Politicians and central bankers have responded, belatedly, to the global slowdown. China is aggressively easing fiscal policy and working to stimulate the industrial side of its economy. The European Central Bank (which has only cut rates since 2011) has committed additional credit to the banking system, and the Federal Reserve has quickly swiveled to an easier posture since year-end. This turns the focus from central bankers to the politicians, with developments like U.S./China trade talks, Brexit and the European Parliamentary elections front and center. While we don’t expect any of these events to present a sustained risk to the global financial markets, their political nature makes their outcomes less predictable. 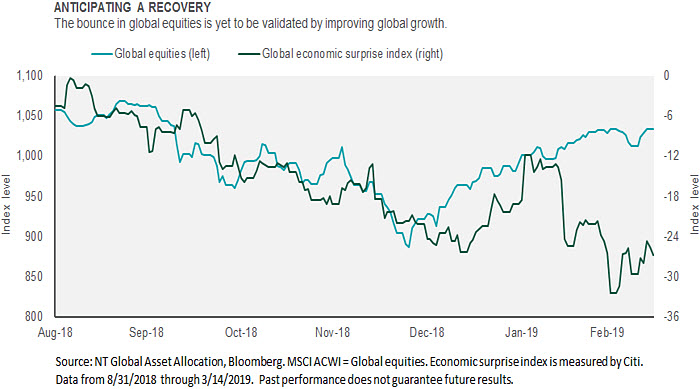 Increased dovishness from major central banks – including the earlier year “Powell pivot” and the ECB’s announcement of new bank liquidity programs – continues to be reflected in investor expectations for monetary policy. As seen in the chart, investors now expect the three-month U.S. Treasury yield (a good proxy for the Fed funds rate) to remain at (or below) current levels for the next four years. Three-month German bunds are expected to remain negative for that entire time frame.

Our expectation that the global economy avoids recession should keep interest rates from going much lower. However, our Stuckflation theme, as well as the presence of central banks watching from the sidelines, should also prevent rates from going much higher. These opposite forces should keep both short- and long-term yields range-bound. As a result, we have positioned portfolios with a neutral duration relative to their benchmarks. From a broader asset allocation point of view, we are not negative on the interest-rate outlook, but see better opportunities in risk assets. In fact, our overweight to interest-rate-sensitive global real estate is driven by our expectation for range-bound interest rates and continued global growth.

Another major contributor to high yield flows has been a shift in demand from the loan market, which has yet to fully recover from the fourth-quarter selloff. The loan market has been further affected by interest rate expectations. Recent commentary from the Fed about a more dovish stance has translated into tempered collateralized loan obligation (CLO) creation – and, thus, loan refinancing and issuance. The combination of the strongest flows into the high yield asset class in several years and insufficient new issuance volume has led to a 6% return through the first two-and-a-half months of the year – the best calendar-year start since 2001. Despite the strong start, we remain decidedly overweight the asset class. The current 6.5% yield is attractive in an environment of solid fundamentals, low default rates and search for income.

Global equities added further to gains over the past month, albeit at a more measured pace than the strong bounce back early this year. While global growth data and U.S.-China trade negotiation progress have disappointed somewhat, equities have taken the news largely in stride. Instead, markets have been comforted by the newfound dovishness on behalf of global central banks, including the Fed; the pivot away from further tightening and new liquidity programs from the European Central Bank.

Higher equity prices combined with modestly falling earnings expectations have led valuations back to levels seen last September (see chart). This makes sense to us, as we felt the market sell-off late last year was unjustified and reflected too high a probability of near-term recession risk. Continued investor skepticism regarding the global economy combined with more accommodative central banks should be supportive of equities – particularly in the U.S. – if our less pessimistic growth expectations are realized. Outside the U.S., we await additional confirmation that trends in Europe are beginning to stabilize and that China’s increased monetary and fiscal stimulus reverses its economic slowdown.

We remain neutral natural resources. Our slightly more optimistic outlook for global economic growth (vs. consensus) is offset by the composition of that growth (services vs. manufacturing) and still-elevated oil inventories, which can have an outsized influence on asset class price movements.

After a steady rise in oil inventories in the fourth quarter (driven by OPEC’s production ramp up in advance of Iranian sanctions, which were ultimately muted by U.S. waivers for a number of countries), inventories have modestly narrowed the gap with the five-year average. Inventories should continue to track lower (vs. history) as: 1) U.S. production growth from unconventional basins gradually slows in response to reduced investment; 2) OPEC production cuts restrict global output; and 3) Venezuelan production continues to slide.

While the supply situation is looking better, investors are still unsure about – and are therefore focusing on – global demand. To understand the global oil demand outlook is to understand the global economic growth outlook. Our expectation for a global growth slowdown – but not recession – should provide modest support to oil prices. However, it is worth noting that global growth seems to be resulting less from manufacturing and more from the services sector, which is less oil/commodity intensive. On a related note, the slowdown in Chinese growth (historically commodity intensive) represents a hurdle.

Flows into U.S. domestic equity funds (mutual funds and ETFs) followed the market lower through December, and then jumped into positive territory by February. Flows into high yield products showed a similar pattern, with these investors (both retail and institutional) selling weakness and buying strength. While some of this may be tax-related selling, it is also likely tied to bad investor habits. We are focused on trying to anticipate where the markets are mispricing assets, and the sell-off that culminated on December 24th presented such an opportunity. In our January investment strategy meetings, we increased our recommended risk in our global policy model to reflect the improved outlook for risk-taking. Since then, two of our favored asset classes have had the highest risk-adjusted performance of all major assets – high yield bonds and global real estate. As our growth and inflation outlook hasn’t changed materially since January, and markets have rallied nicely, we have left our tactical asset allocation recommendations unchanged for the last two months. We expect growth in the U.S. and emerging markets to beat restrained investor expectations – and it will be important for both emerging market and European data to show stabilization and signs of improvement in coming months.

The one notable change in our investment strategy this month was a downgrade in the U.S. regulatory environment to negative. The drumbeat around increased regulation (be it technology, financial or tax-related) is only likely to increase through the 2020 U.S. election, and this will increasingly be a distraction for investors. Conversely, inflation doesn’t look like a leading suspect to upset the risk-taking environment as many measures globally show slowing inflation and the headline U.S. and Chinese consumer price indexes are only rising 1.5% over the prior year. The constrained inflation environment is proving a catalyst for easier central bank policy, which we expect to support global risk-taking.

We still expect risk-taking to be rewarded this year, hence our favoring of high yield bonds, U.S. equities and global real estate over investment-grade bonds. We are, however, at a moderated level of risk-taking given the uncertainties on the horizon. Better clarity on the economic recovery in Europe and China will be important, as will some progress in trade talks between the U.S. and China. We’ve been expecting a near-term hard Brexit to be avoided by a delay to the March 29th departure date, and while that seems the most likely outcome, there are still significant uncertainties to be resolved before that is concluded. We look forward to updating you on our investment outlook as the year progresses.

Yes, Inflation is a Risk

The keys for investors to continue taking risk in this market are positive global growth and low interest rates. But we’re counting on central bankers to play their part with easy monetary policy. So why wouldn’t they play their part? Katie Nixon takes a closer look.

Tying Risk and Return While Investing for Retirement

We asked about 1,200 workers and retirees what they think about investing for retirement. A few answers might surprise you.