The Fed's paydown will end as the ECB adds more stimulus, and a poor progress report for U.S. tariffs.

We're all faced with a series of balancing acts. Trade-offs confronting us include labor vs. leisure, saving vs. spending, and calories vs. calisthenics. These calibrations have been taken to new depths of detail by an explosion of data and apps that analyze it. "Smart" watches can now nag you to relax, rebalance your portfolio and restrain your appetite.

Central banks also face a balancing act as they try to modulate growth and inflation. During the last decade, that balancing act has centered on balance sheets, as quantitative easing (QE) programs have gained prominence. Because there is no history that conclusively illustrates the effects of QE on economic outcomes, calibrating monetary policy is more difficult in this realm.

At the Federal Reserve's meeting next week, it is expected to announce changes to its balance sheet strategy. While esoteric to some, this topic has been top-of-mind for the financial markets. Handling its balance sheet well, and communicating strategy effectively, will be among the Fed's biggest tasks this year.

The Fed's balance sheet used to be pretty boring. It was small, and grew slowly over time in concert with the American economy. That changed when crisis-era programs and quantitative easing were implemented. By the beginning of 2014, the Fed's balance sheet was five times larger than it had been in 2008. 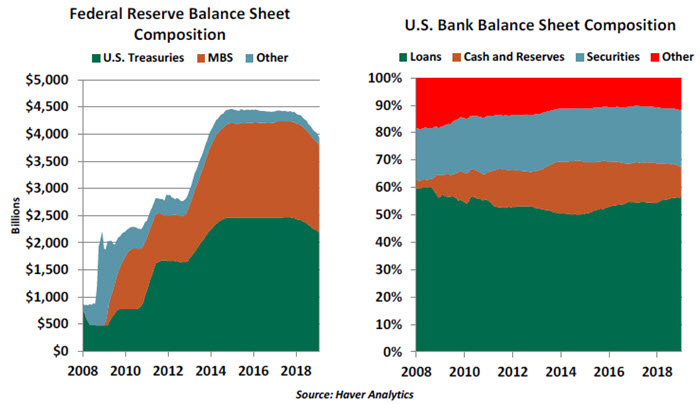 Under QE, the Fed purchased Treasury and mortgage-backed securities in an effort to bring down long-term interest rates. In so doing, they sought to make it costly for investors to become too risk-averse.

QE was a departure for the Fed, which is reluctant to own too many government securities. It gives the appearance of monetizing deficits, which runs counter to Fed independence. The separation of the Fed from the Department of the Treasury was formalized more than 60 years ago.

Studies of the effectiveness of QE in the United States have produced mixed results. As you might imagine, the need to control for the multitude of factors that affect interest rates makes isolating the impact of the program tricky. In aggregate, the program is estimated to have lowered long-term interest rates by about 1.5%, but successive phases of the effort are thought to have had diminishing influence.

In 2014, the Fed stopped adding to the balance sheet, confident in the durability of the U.S. economic expansion. And in the middle of 2017, plans for reducing the balance sheet were announced.

The effects of QE have been unclear, so it’s hard to anticipate the impact of unwinding it.

At the time, the Fed earned high marks for the design of the retreat and the manner in which it was communicated. A formulaic approach was employed to give investors clarity. Janet Yellen, Fed chair at the time, indicated uncertainty would be minimized by implementing a high bar for changes to the schedule. Phrases like "watching paint dry" or "autopilot" were used to describe the process. 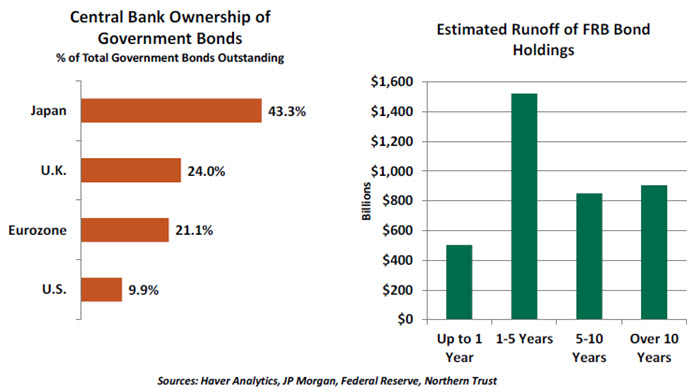 At the time, the new normal for the Fed's balance sheet seemed a long way off. Respondents to a survey taken by the Federal Reserve Bank of New York in January of 2018 expected the balance sheet to settle in somewhere around $3 trillion, a 30% reduction from its peak. On the Fed's schedule, it would have taken several years to reach that level.

A key determinant of the new steady state is the level of reserves that banks choose to hold. Prior to the crisis, banks were able to manage reserves down to negligible levels; since then, a new range of requirements has led banks to keep more liquidity on hand. Reserves held with the Fed are the most liquid assets one can own (other than cash), and receive favorable treatment when bank capital is measured.

In the middle of last year, signs of reserve scarcity began to emerge in the markets for overnight funding, forcing the Fed to alter some of its short-term rate setting. Those frictions seemed to intensify as 2018 drew to a close, even though the Fed's balance sheet had declined by less than 15% from its highest point. A strategy re-think seemed warranted, but officials vowed publicly to press on.

This, along with other fourth-quarter phenomena, led to a modest tightening of financial conditions. Market participants assumed that if QE lowered interest rates, a reversal of QE would have the opposite effect. Using simple math, they calculated a retreat to $3 trillion would be the equivalent of two or three interest rate hikes; there was concern that economic activity was not strong enough to withstand tightening on this scale.

The Fed may choose to do something very different with its portfolio.

The validity of this calculation can certainly be questioned. But the perception that the Fed was overdoing it took root among some market participants. To pacify them, monetary officials have been conducting an increasingly public review of balance sheet policy, and changes to that policy are imminent.

Several elements of the updated strategy will be worth watching. The equilibrium size of the balance sheet is certainly one of them; a level of around $3.5 trillion is now forecast by the New York Fed survey. The Fed is also likely to shift away from mortgage-backed bonds and into Treasury securities, with shorter-term Treasuries taking a more prominent role. These moves would be designed to steepen the yield curve and provide the Fed with flexibility to adapt to changing circumstances. The Fed hopes to return to a "set it and forget it" approach to balance sheet management. But that luxury will probably prove elusive. With no history to guide it and an explosion of data to analyze, regular calibration will probably be required. And there is no app for that.

Trade surpluses and deficits are not intrinsically good or bad. In a global economy, each nation exports the goods and services for which it has an advantage and imports what it cannot efficiently produce. In every year since 1976, the U.S. has run a deficit in goods – a gap that merits closer scrutiny now because of the actions the U.S. has taken to change the terms of trade. A year has passed since the administration proclaimed significant tariffs covering steel and aluminum. Several tranches of tariffs on Chinese imports followed.

The goal of these actions was to support domestic production, but results so far demonstrate a different outcome. Last year, the U.S. trade deficit in goods reached a new depth, with the U.S. importing over $891 billion more than it exported. Imports rose by 8.6% from 2017 to 2018. Exports also increased but did not keep pace, growing only 7.6% for the full year.

Tariffs are a simple construct: When a tariffed good reaches the border, the importer must pay a tax before border agents will allow it to enter the country. Money flows from the domestic agent who ordered the good to the coffers of the country that imposed the tariff. Any notion that tariffs are making exporting countries pay into the U.S. Treasury is a misstatement.

The presence of a tariff may not result in a higher price to consumers. The foreign exporter may offer to reduce prices to remain competitive. The importer can similarly try to absorb the tariff cost into its profit margins. But the capacity of either entity to eat the new cost is limited.

If the importer chooses to increase prices, domestic producers have a decision to make. The tariff could allow domestic providers to sell their wares at a lower price than their import competition and gain market share. However, if domestic producers have been struggling to profitably compete with the importer's previously low prices, it is more likely they will raise their prices to match the elevated cost of imports, thereby padding their profits.

In the end, buyers find a market that has not structurally changed, but now features higher prices. Over the long run, capital could be redirected to support domestic investment that avoids tariffs. But in the near term, tariffs simply increase the cost of existing supply chains and drive higher inflation. 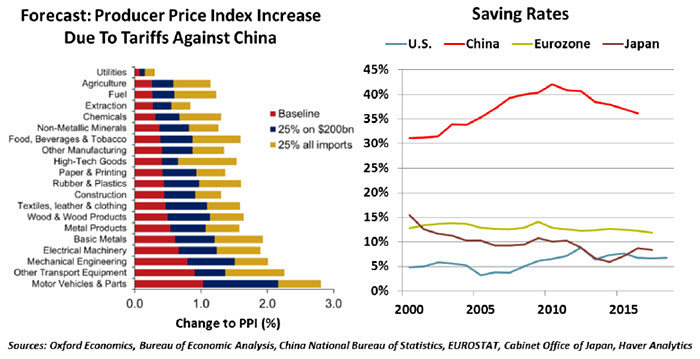 The persistence of U.S. trade deficits is partly the byproduct of something positive: buoyant demand for products resulting from outperformance of the U.S. economy. The last time the trade gap significantly narrowed was in 2008-2009, as U.S. consumers and businesses slowed their spending and investment. We do not encourage a recession as a remedy.

Tariffs are taxes paid by an importer, and are usually passed on to consumers.

Our trade imbalance is also a natural outcome of trade between a country that saves heavily and one that saves little. China embraces a culture of saving, whereas the United States has a stronger tradition of consumerism. This is a natural recipe for the former having a trade surplus with the latter. The Chinese preference for saving and the American preference for consumption are structural differences that will take a long time to converge.

While we support the economic consensus that tariffs are inefficient, we don't deny the unfair trade practices that have led to current tensions. Many of today's trade discussions were necessary and overdue. To their credit, tariffs have been effective at bringing world leaders to the table for broad discussion. But tariffs alone cannot correct trade imbalances.

Last week, the European Central Bank (ECB) conceded the region's deteriorating economic prospects and acknowledged rising external risks. To respond, the ECB extended the forward guidance of no hikes through the end of 2019 and announced a third series of targeted longer-term refinancing operations (TLTRO-III).

The TLTROs are one of the ECB's non-standard monetary policy operations that provide cheap finance to eurozone banks, even during adverse market conditions. Their objective is to strengthen the transmission of monetary policy by lowering banks' marginal funding costs and stimulate lending to the real economy. Past TLTROs aided the region's struggling banks, helping banks to maintain access to ample liquidity at low costs.

The TLTRO-III operations will be conducted starting in September 2019 and ending in March 2021, offering funding with two-year maturities. The timing is important: the first maturities of the €722 billion of long-term loans granted in past ECB actions will start to come due in June 2020. The ECB's net stable funding ratio (NSFR) requirement mandates that banks have a certain amount of funding with a maturity of at least one year. Without TLTRO-III, banks would have been forced to find alternative and likely higher-cost sources of funding to keep their NSFRs in compliance. 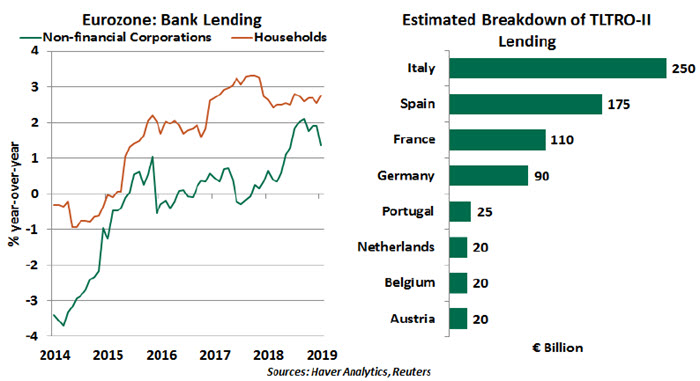 Italian banks have recently struggled to access capital markets, owing to volatile government bond yields. Italian banks, along with their Spanish counterparts, have been major beneficiaries of preceding editions of TLTROs, and are likely to benefit the most from the new round.

TLTROs will benefit fragile Italian banks the most.

Though precise details are still forthcoming, the new program would likely be aimed at prolonging existing liquidity support rather than providing a significant amount of additional stimulus. The eurozone economy today is in relatively better shape than at the onset of the debt crisis, or even in 2016, when TLTROs, rate cuts and asset purchases were deployed to combat deflation risks.

Should further downside risks materialize, the ECB would need to creatively use its weapons to fight the slowdown. The toolkit is not exactly robust. We therefore concur with ECB President Mario Draghi's conclusion that the central bank must "try to be proactive rather than reactive" in its actions.