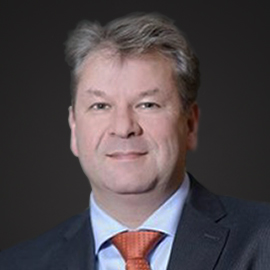 Thierry joined Northern Trust in 2018 and has 27 years of experience in the financial services industry.

Thierry started his professional career at Banque Degroof Luxembourg where he held roles in treasury and risk management, before becoming the Chief Executive Officer asset management company, Degroof & Portabella. He left Group Degroof after eight years to join KBL European Private Bankers in Luxembourg as Group Head of Risk Management. Thierry subsequently joined PwC Luxembourg as Partner where he led the coordination of the governance services, financial risk management and the Basel/CRD services within the GRC (Governance, Risk & Controls) practice. In 2013, he moved back in the banking industry to lead a team of over 100 risk managers as BIL Group Head of Risk Management, a significant institution in Luxembourg directly supervised by the ECB.

Thierry is member of consultative committees for the Commission de Surveillance du Secteur Financier (CSSF) and the Luxembourg Bankers Association known (ABBL) where he serves as Chairperson of the Banking Supervision Committee. He is also the founder (1997) and board member of ALRiM, the Luxembourg association for Risk Management Professionals.