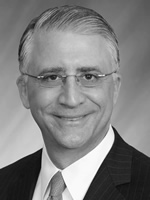 Prior to joining Northern, he spent his first 12 years in the financial services industry with Wells Fargo (formerly First Union National Bank). While at Wells Fargo, he assumed senior management positions within the bank including human resources.

He is Senior Vice President at Northern Trust. In 1996, Tom completed the Executive Management Program at Florida State University. In addition, Tom is a registered representative (Series 7) with the NASD.

Tom and his wife Sandra have two children and loves to spend as much time as he can with his family, including extended family get-togethers.

As Senior Market Executive, he is responsible for a team of professionals who serve high net worth clients and families with comprehensive wealth management services incorporating investment management, trust, and banking.