WHAT A GLOBAL FAMILY NEEDS TO KNOW

If you are not a United States ("U.S.") citizen (or a U.S. resident/domiciliary) and are considering an investment in the United States, you may have questions about the U.S. tax rules. The U.S. federal government imposes not only income tax, but also transfer tax, which includes estate, gift, and generation-skipping transfer ("GST") taxes.

There is also the question of double taxation. Will your home country impose tax over and above the taxes that you pay in the United States? Or, is there a tax treaty or foreign tax credit that can provide tax relief? Finally, privacy also is a key concern for many, so it is important to understand tax filing and reporting obligations.

This paper answers 10 questions that can help the non-U.S. individual investor better understand the U.S. tax system, and provides takeaways that may help mitigate the unintended application of U.S. tax.

Please note that you should always discuss any desired U.S. activity with a professional tax advisor and / or international legal counsel before making any decisions to properly understand the U.S. tax implications of your particular situation.

1. DO THE FEDERAL INCOME TAX CONSEQUENCES OF MY INVESTMENT DEPEND ON HOW MANY DAYS I SPEND IN THE UNITED STATES?

Yes. For income tax purposes, U.S. residents are taxed as U.S. citizens, which means the U.S. resident is taxed on his or her worldwide income, even if the income is earned outside the United States. Thus, a non-U.S. citizen who avoids U.S. residency status may achieve certain tax benefits.

A U.S. resident is a Green Card holder or someone who meets the "substantial presence test." 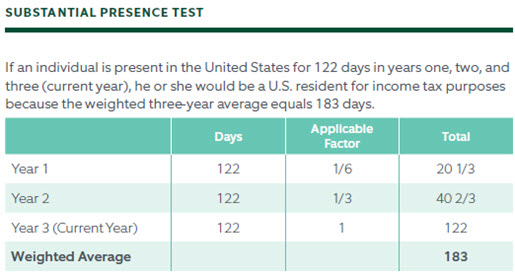 Note that the substantial presence test can be overcome if the individual can prove that, based on all facts and circumstances, he or she has a closer connection to a foreign country than to the United States.

TAKEAWAY: If you are not a U.S. citizen or green card holder, then spend 121 days or less in the United States each year in order to prevent U.S. income tax on your worldwide income.

2. DO THE FEDERAL TRANSFER TAX CONSEQUENCES OF MY INVESTMENT DEPEND ON HOW MANY DAYS I SPEND IN THE UNITED STATES?

TAKEAWAY: To prevent having to pay the U.S. transfer tax, be prepared to show that you intend to return to your home country. Owning real estate in your home country and maintaining business and social relationships there help prove intent.

Yes, but only on U.S. source income, not on all worldwide income. U.S. source income falls into two categories: "ECI" or "effectively connected income" and "FDAP" or "fixed or determinable annual or periodical gains, profits, and income."

FDAP generally includes interest, dividends, rents, and royalties. Capital gains are not FDAP income. However, the Foreign Investment in Real Property Tax Act of 1980 ("FIRPTA") imposes U.S. income tax when a non-U.S. resident sells (a) U.S. real estate, or (b) shares in corporations that own significant real estate. Additionally, a non-U.S. resident who sells an interest in a partnership (including an LLC taxed as a partnership) will be taxed on whatever amount of capital gain, if any, that is attributable to assets used in a U.S. trade or business.

4. IF I HAVE U.S. SOURCE TAXABLE INCOME, WHAT IS THE TAX RATE?

ECI is taxed at ordinary U.S. individual income tax rates, which can be as high as 37%.

FDAP is taxed at a flat rate of 30%. And, unlike ECI, FDAP is a tax on the gross amount of income. This is in contrast to ECI, which is a tax on net income.

In addition to these federal income tax rates, individual U.S. states may also impose income taxes. A full discussion of state income taxes is beyond the scope of this piece.

5. IF I AM NOT DOMICILED IN THE UNITED STATES, AM I SUBJECT TO U.S. FEDERAL ESTATE TAX?

Yes, but only on assets located in the United States. The gross estate of a U.S. citizen or U.S. domiciliary includes the value of all of the individual's property, real or personal, tangible or intangible, and wherever in the world it may be situated. In contrast, a non-citizen, non-domicilary's gross estate only includes property that is situated in the United States.

Often, it can be difficult to tell when assets, particularly intangibles, are located in the United States. This chart provides some examples of U.S. and non-U.S. property: 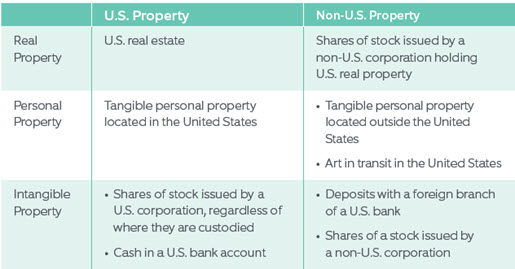 TAKEAWAY: Keep personal valuables like jewelry and artwork in your home country in order to avoid U.S. estate tax.

6. IF I AM NOT DOMICILED IN THE UNITED STATES, AM I SUBJECT TO U.S. FEDERAL GIFT TAX?

7. ASSUMING I OWE U.S. FEDERAL TRANSFER TAX, WHAT IS THE RATE?

Although a U.S. citizen does not pay estate tax until his or her assets exceed $10 million, adjusted for inflation ($11.18 million in 2018), a non-domiciliary only can exclude the first $60,000 of assets from the estate tax.'

Additionally, a non-domiciliary can deduct funeral expenses, administration expenses, losses, and debts from his or her U.S. gross estate, just like a U.S. citizen or U.S. domiciliary. However, only expenses that are attributable to the U.S. assets are deductible. This means that, in order to calculate and claim the deduction, the non-U.S. citizen subject to U.S. estate tax must tell the IRS on a U.S. estate tax return the total value of the decedent's worldwide assets. In many instances, executors for non-domiciliaries choose to forgo the estate tax deduction because they do not want the IRS to know the decedent's full financial picture. The fear is that once this information is disclosed to the IRS, the United States will turn the data over to the decedent's home country under one of its mutual exchange of information agreements.

For U.S. GST tax purposes, a non-domiciliary has the same lifetime exemption amount as a U.S. citizen ($11.18 million in 2018, adjusted for inflation). This means he or she can transfer $11.18 million during life or at death without owing GST tax.

TAKEAWAY: Calculate whether the value of the U.S. estate tax deduction is worth having to disclose all of your worldwide assets to the IRS.

$11.18 million transferred during life or at death

8. IF I AM NOT DOMICILED IN THE UNITED STATES, AM I SUBJECT TO U.S. FEDERAL GST TAX?

Yes, but only on assets located in the United States. The GST tax applies a tax on transfers to beneficiaries that are more than one generation removed ("skip persons"). Grandchildren are the classic example. These multi-generational transfers are taxed on the theory that, if the assets had passed from parent to child at the parent's death, and then again from child to grandchild at the child's death, the government could collect estate tax not only when the parent dies, but also when the child dies. The GST ensures that the child cannot avoid estate tax by asking the parent to transfer the asset directly to the grandchild.

9. IF I INVEST IN THE UNITED STATES, WILL I HAVE TO FILE A U.S. FEDERAL TAX RETURN?

It depends. Filing obligations are as follows:

It depends. If the home country has any income, social security or transfer tax treaties with the United States, the treaty rules can mitigate double taxation. The home country laws also may grant tax credits for U.S. taxes paid. A tax advisor in your home jurisdiction can provide additional information.

The confluence of the global economy, international investment, and personal mobility in the modern day has resulted in a wealth and tax planning landscape that is dynamic, to say the least. Cross-border planning increasingly requires an awareness of the implications of international family relationships, investments, trusts, and entities.