The U.S. and China are making progress towards a limited trade deal, and Brexit is now a step closer to resolution.

After several quarters of gridlock, it would appear progress is finally being made on key issues clouding the global economic outlook. The U.S. and China are inching closer to signing “phase one” of a trade deal by not only pausing tariff escalation but also potentially rolling back some of the recently applied tariffs. Brexit is now a step closer to resolution, subject to the outcome of the December 12 elections. In the eurozone, there are tentative signs that the industrial sector is bottoming out.

That said, the forecast is still cloudy. U.S./China trade negotiations are far from complete, and there are a range of possible outcomes for the elections in the U.K. In our base case, economic activity will remain subdued but sustained in major economies as tariffs and trade tensions continue to sully the environment. Central banks in advanced economies are expected to be on hold for the foreseeable future.

Here are our views on the world’s major economic blocks. 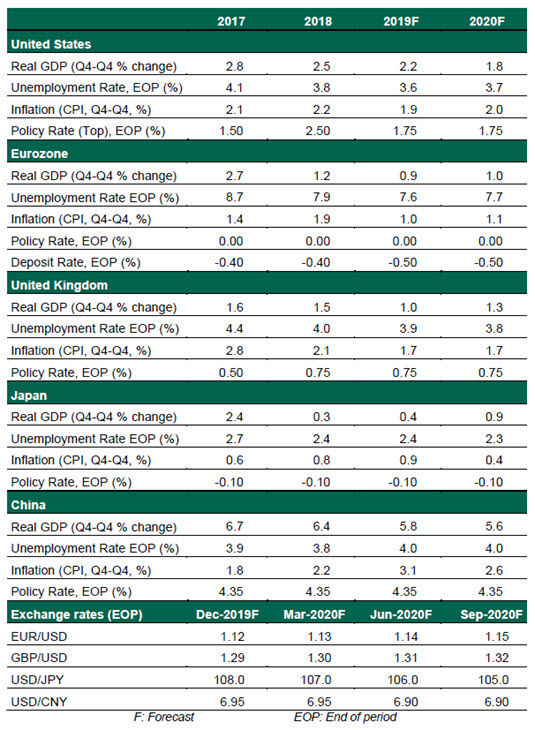 Growth Prospects and Challenges Ahead for the U.S., U.K., Eurozone, China, and Japan.

The sudden escalation of trade tensions that have originated from Washington is casting doubt over the outlook. If the escalation continues, the global economy will continue to decelerate and recession risks will rise.

A change to global uncertainty will require a concrete settlement of key issues . While downside risks to the global outlook have not increased, they haven’t declined, either.