Today’s government finances add to tomorrow’s problems; The strong U.S. dollar is a mixed blessing; Prisons are expensive for both taxpayers and inmates

Last Monday was the deadline for filing tax returns in the United States. (Or for procrastinators, last Monday was the last day to file for an extension.) The process can be painful, both administratively and financially. (Especially when you are called upon not only to assist your adult children with their 1040s, but to help them locate the basic documents needed for the task. Good thing we love them.)

I finished my April labors last weekend, and I certainly hope my time and my remittance will prove well-spent. But the more I think about our government's revenue collection system and the U.S. federal budget, the more I worry. Here are some cold, hard facts about our nation's fiscal process and prospects:

More could be said about the alarming state of Federal finances, but we'll stop there. Interestingly, however, the national mood surrounding the subject seems to be relaxed. We hear renewed talk about how deficits and debt don't matter, and even calls to borrow more aggressively under Modern Monetary Theory.

To be sure, we have yet to feel the consequences of living beyond our means. The U.S. dollar is strong, and U.S. interest rates remain low. But there are no assurances these blessings will last forever.

The federal budget will soon become a battleground. The debt ceiling will become binding in mid-summer, and work on the 2020 budget will reflect the politics of competing priorities. Short election cycles in this country are ill-matched with the long-term issues that force tough choices.

Tax filing is a labor that absorbs a short period of time every spring. But all of us, and our children, could be laboring for a long time to dig out from under the debt we are accumulating.

Since the second half of 2018, weakening data has led investors across countries and asset classes to fret about the possibility of a global economic slowdown. As a result, the U.S. dollar, generally considered the global reserve currency, has recovered substantial value over the past year.

The trade-weighted broad dollar index has risen 7.9% since April 2018. Deteriorating economic conditions in the eurozone, uncertainties surrounding Brexit, and the unresolved trade U.S.-China trade war have all contributed to the shift towards the dollar as a safe haven currency.

Recognizing the deteriorating economic conditions, the Federal Reserve (among other major central banks) has chosen to delay the monetary policy normalization process. We would expect stagnating interest rates to lower the value of the dollar, but the currency has defied expectations, remaining broadly flat (-0.9%) on a year-to-date basis. The slight decline can be explained by investors' appetite for riskier emerging market assets amid signs of economic stabilization in China.

The relatively healthy state of the U.S. economy and higher interest rates vis-à-vis the other advanced economies have made the dollar more attractive. A number of G10 currencies, like the euro and yen, are carrying negative interest rates. The yield on the U.S. 2-year Treasury note is hovering close to 2.4%. By comparison, Germany's and Japan's 2-year sovereign yields are in negative territory: -0.57% and -0.15%, respectively. Therefore, from a cost of funding angle, the dollar looks more profitable than some of the other major currencies.

U.S. consumers cherish a stronger dollar, as it enables them to buy goods from other countries at lower prices. On the other hand, there are risks associated for the U.S. corporations, particularly those with substantial overseas business. A stronger dollar makes American products more expensive for overseas buyers. Last year, several consumer and industrial firms, including Hasbro, Harley-Davidson and Procter & Gamble warned about the impact of a stronger dollar on their performance.

In this way, a stronger greenback leads to wider trade deficits. This has worked against President Trump's agenda of boosting U.S. exports, and he has voiced his displeasure. On March 2, in a reference to the dollar's run, he stated: "I want a strong dollar but I want a dollar that does great for our country, not a dollar that's so strong that it makes it prohibitive for us to do business with other nations." That is a hard balance to strike.

“The strong dollar will continue to challenge U.S. exports and some emerging markets.” A stronger dollar and rising interest rates are a cause of concern, particularly for emerging markets that have issued large amounts of foreign debt. The increasing cost of servicing dollar-denominated debt makes indebted nations with large deficits and low foreign-exchange reserves vulnerable to credit-rating downgrades and defaults. (Chile and Turkey chief among them.) Generally, a stronger dollar and rising interest rates lead to an outflow of funds from emerging markets into the U.S. as investors strive to earn higher yields. This situation put several emerging market currencies under stress for most of 2018.

As the global economy moves into lower gear, central banks including the Federal Reserve are unlikely to adjust interest rates anytime soon. With this pause, emerging markets can breathe a sigh of relief and use this window as an opportunity to reduce their imbalances, a correction they should have made long ago.

Despite a deteriorating fiscal position (see above), the U.S. dollar is likely to remain strong. U.S. growth and U.S. markets are likely to sustain good performance, especially relative to other developed countries. This will be a headwind for U.S. exporters, and an ongoing concern for emerging markets who are struggling to get their fiscal houses in order.

As we contemplate the costs of government, one growing item should distress everyone: Incarceration. The United States leads the world in its rate of imprisonment, and it's an expensive habit. At any given time, 2.3 million Americans are in custody, at an average cost of $36,000 per year per prisoner.

The prison population has grown due to measures popular among voters. Habitual offender statutes, like the 1994 "three strikes" law, requires a life sentence for anyone convicted of three federal crimes, if at least one was violent. The "War on Drugs" set high minimum sentences for narcotics convictions. Politicians find ready support for "tough on crime" platforms, but the costs are massive and the benefits hard to measure.

Those who serve their time face an impaired future. Most will endure long bouts of unemployment or underemployment: hiring managers are suspicious of hiring ex-cons, and entire employment sectors like education, law enforcement and pharmaceuticals are entirely off limits to ex-felons in most states. Former inmates are often left with few above-board options and an increasing temptation to return to criminal activity, leading back to prison. The damage to a person's net worth from time in prison is permanent and can span generations.

“Prison is costly for inmates and for society.” 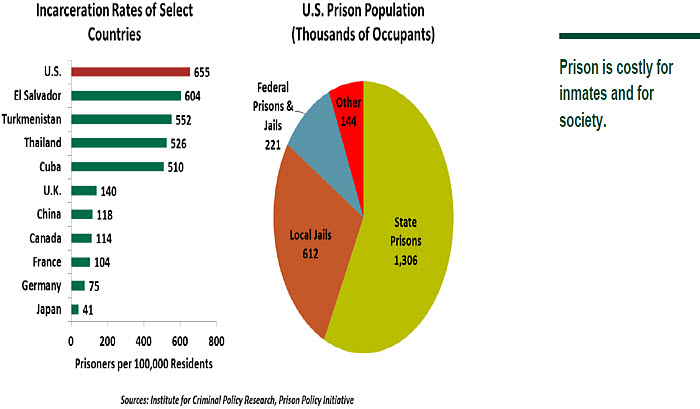 The road to reform will be long, but the journey has started. The 2018 First Step Act eased minimum sentences and amended the federal three-strikes law to a mandatory sentence of 25 years instead of life. Harsh sentences for crack cocaine possession have been retroactively reduced, and inmates have been given more rights to job training and family visitation. First Step is indeed a good first step, but it is limited to federal jails. The majority of convicts are in state and local custody, and each jurisdiction must consider its own path to reform.

Inmates cannot vote, which will slow efforts for reform. But the high rate of imprisonment is a deadweight loss to convicts and society that continues even after terms are served. It will remain so until we find a way to emphasize rehabilitation over retribution.