U.S. consumer confidence is high, but confidence in China’s economic measurements is not.

“Politicians use statistics in the same way that a drunk uses lamp posts—for support rather than illumination.”

As Scottish poet Andrew Lang reminds us, statistics should be read critically. The assembly of economic results is constrained by data limitations, distorted by methodology changes and spun for political purposes. Despite these inherent flaws, it is foundational for making decisions, assessing progress and comparing outcomes across countries. The onus is on every nation to provide the most accurate data possible.

China has long been suspected of not taking this spirit to heart. Its reported economic growth has been unusually robust and smooth, leading to doubts that art is being combined with science in the compilation of economic output. Observers have generally chosen to look the other way, but heightened suspicions of incomplete or inaccurate data are adding uncertainty to what is already an uncertain situation for China’s economy.

Measurement errors are unavoidable in an economy, particularly in emerging economies as large as China. But skepticism about the accuracy of the official Chinese data has intensified. As we wrote last year, the Chinese economy has witnessed impressive growth thanks to a blend of reforms and “steroids” (government-financed investments).  Over the past four decades, China’s share of the world economy has risen from 2.7% in 1980 to around 16% in 2018. 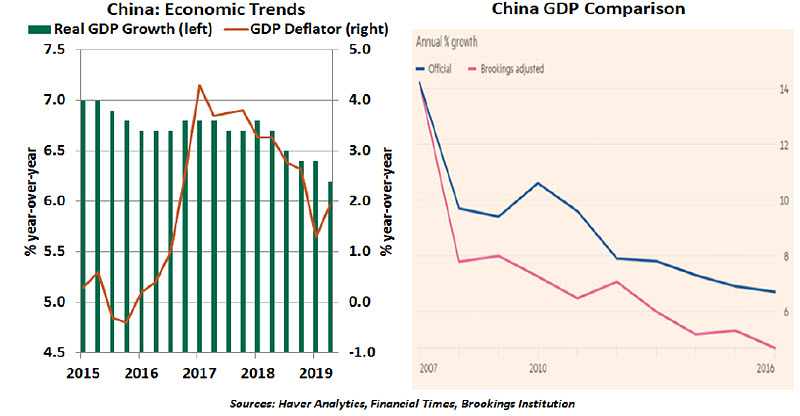 While Chinese policy has certainly boosted growth, recent studies suggest there has been another factor behind the impressive results. China transitioned to the United Nations’ System of National Accounts in 1993, which uses the value-added approach to measuring gross domestic product (GDP). Despite this, the country has long been criticized for over-estimating growth and smoothing out the variations in real economic data.

China’s National Bureau of Statistics (NBS), originally created to track agriculture and production in state-owned enterprises, is the agency in charge of economic accounting in China. The NBS uses the estimates of local GDP provided by local governments to arrive at official national GDP and its components. The system is rather unique when compared to an emerging market like India where all the required data points are collected and aggregated at the Central Statistics Office and used to arrive at GDP numbers.

“Chinese policymakers are well aware of the data discrepancies.”

But the devil is in the details, in this case the hierarchical structure. Though local statistical bureaus follow the NBS’ uniform statistical procedures, regional officials are rewarded for meeting growth and investment targets. This gives them an incentive to inflate output data.

That said, the NBS is aware of such biases and does adjust figures using data it collects independently. Hence, the accuracy of the final official GDP and components relies on the extent of manipulation by local bureaus, data that the NBS has and the NBS’ effort to sanitize that data.

For several years, the sum of China’s provincial GDP has exceeded the national data, a clear sign of numerical inflation. According to the NBS’s own analysis, output reported by 31 provinces in 2016 totaled 3.7% more than the statistics bureau’s figure for national GDP. It was over-estimated by 10% seventeen years ago. Though the discrepancy between regional and national GDP data has improved, the gap is still large. China still scores the lowest among major emerging markets in the World Bank’s Statistical Capacity score, an assessment of each country’s ability to collect, analyze and disseminate high-quality data about its population and economy. 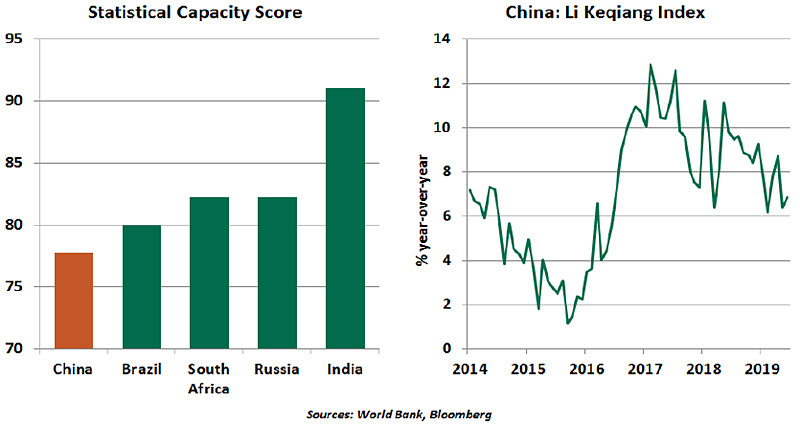 According to a study titled “A Forensic Examination of China’s National Accounts” by the Brookings Institution, China over-reported its GDP growth between 2008 and 2016 by around two percentage points (on average). The investment and savings rates were over-reported by about seven percentage points in 2016. Adding up the numbers over time, official figures for 2016 are likely to have exaggerated the size of the economy by 16% or above $1.5 trillion.

In 2017 the NBS’s chief economist promised to “nearly eliminate” the gap. Authorities are cutting local interference and double-counting by computing GDP for the provinces, but there is still not enough transparency. The agency provides few details on how the GDP deflator (the inflation metric used to convert between nominal and real growth) is calculated. The reported rate of inflation has been plummeting, which has the effect of boosting real GDP growth. And the NBS still lacks adequate data for the services sector, accounting for more than half of output.

“GDP proxies do not properly estimate the growing services sector.”

For those looking for an alternative measure, the Li Keqiang Index (named after China’s current Premier), is based on tangible economic activity like lending, electricity consumption and rail cargo volume.  Commodity exporters in Latin America and Africa see the slowdown in Chinese imports reflected in import volumes and value. Recent failures of regional banks in China are just another indicator of problems that do not get reflected in the rather optimistic real GDP data.

With the trade war taking a toll, China’s economy is being closely watched by global investors for clues on the extent of the economic slowdown. Without good data to rely on, speculation can weigh on the asset and currency markets, something the authorities will find hard to contain.

Compiling economic statistics is never easy, especially in a complex economy like China. While we realize some genuine measurement constraints, the Chinese government needs to do more in addressing global community’s concerns over data distortions. Closing the gap further will ward off criticism from investors over the credibility of data of the world's second-largest economy. The current slowdown is no time to leave investors stumbling in the dark.

The first estimate of U.S. gross domestic product (GDP) growth contained a profound divergence: Consumer spending exceeded expectations by growing at an annual rate of 4.3%, while business investment contracted by 0.6%. While the results caught some by surprise, we may have had a preview of these outcomes in confidence measures.

Confidence scores are compilations of opinion surveys. By their nature, they can make many statisticians uncomfortable. The scores are quantitative aggregates of qualitative opinions: Surveys of individual consumers and businesspeople are compiled into a small set of summary figures that disregard individual detail. Each respondent will be informed by individual circumstances that may differ greatly from the general experience. In a sufficiently large sample, however, any outliers do not prevent confidence measures from detecting trends.

These surveys are valuable because they reflect real people’s immediate experiences. For instance, recessions are accompanied by an increase in unemployment, but those workforce changes take time to measure. A consumer witnessing layoffs, reduced hours and slow hiring will reflect that experience in survey responses before labor measures will show a trend. Indeed, as shown below, declines in the University of Michigan Consumer Sentiment Index were leading indicators for higher unemployment and economic contraction in the last three U.S. recessions.

These survey attributes help put the U.S. GDP growth reading in context. Consumer sentiment measures have stayed elevated since 2017. On any given day, we could be worried about trade and tariffs, Brexit and instability on any number of fronts. But the average consumer is still employed, still spending and still feeling confident. We do observe that sentiment indices tend to fall along with large stock market declines; if this week’s equity selloff is sustained, this could be the first result to take some air out of confidence measures.

“U.S. consumers have ample reason to feel confident of late.”

When reading these surveys, it is important to note that their levels are not always meaningful. The surveys are useful to show changes from prior periods. Over the past two years, both the Michigan 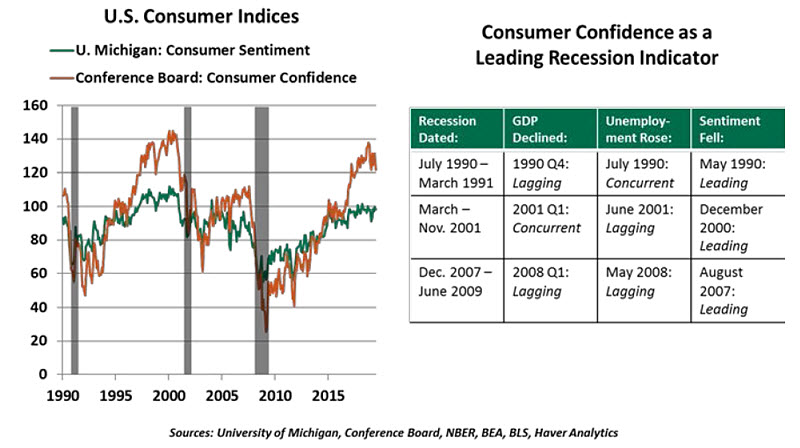 and Conference Board surveys have held at high levels not seen since the late 1990s. And, of course, each monthly reading can be noisy. A one-month downward trend is not significantly correlated with a downturn, but a declining trend over two or more months would give pause.

Business surveys are also useful leading indicators. In the United States, surveys by the Institute for Supply Management, National Federation for Independent Business and National Association of Business Economists, among others, are widely cited to take the temperature of industrial activity. Sector-specific surveys are used within every industry to forecast growth prospects.

Business surveys have a distinct advantage of gauging business sentiment rapidly. Actual business expenditure as shown in GDP results is a quarterly report in most countries, and the delay in seeing data can be detrimental to decision-making. A slowdown starting in April, the beginning of the second quarter, would not be apparent until July if quarterly GDP were our only available tool.  Higher-frequency measures like the Purchasing Managers’ Index (PMI) inform forecasts quickly.

In the United States, business surveys previewed the slowdown in the second quarter business investment. Businesses have trimmed their hiring and investment as uncertainty around trade has grown. The PMI and Small Business Optimism Index have each fallen over the past year.  These moves have been supported by the anecdotal evidence seen in the Federal Reserve’s Beige Book summary of comments from U.S. businesses. Managers who are not confident do not invest, and a lack of investment weighed on Q2 GDP.

We are eager to see how the disconnect in sentiment between consumers and businesses is resolved. Nearly 70% of the U.S. economy is fueled by consumption, and in the best case, buoyant consumer spending will elevate business sentiment. However, businesses are exposed to risks including trade uncertainty and a slower global growth picture. No amount of domestic consumer cheer can remedy those lingering issues. Given that consumer sentiment measures are not yet showing any loss of confidence, we expect strong consumer performance to continue.

The picture is less optimistic in the Eurozone. As we forecasted, the region continues to stagnate, with disappointing industrial production data continuing to accumulate, most recently from France and Germany. Market speculation has turned to how and to what extent the European Central Bank will intervene to support its economy at its September meeting. Surveys of both consumer and business confidence have borne this out. Measures from ZEW and the Institute for Supply Management indicate rapidly falling business confidence, while consumer confidence as reported by the European Commission has been sliding since the start of 2018.

The outsized decline in July’s ZEW indicator is especially concerning. The ZEW Financial Market Survey polls banks, insurers and industrial firms across the region. Its July slide was consistent in both the broad Eurozone index and its index for Germany, the largest member of the Eurozone.  European businesses are clearly braced for a slowdown ahead. 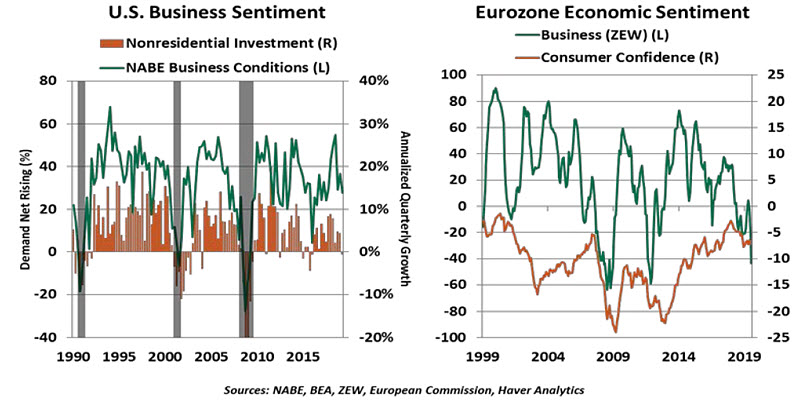 Research by the European Central Bank found the European Commission’s consumer confidence surveys “gain some predictive power during periods of tension, when they feature large swings…as they help anticipate forthcoming movements in the main economic indicators.” The European consumer survey tends to carry a negative tone. It reflects the balance of consumers expecting an improved economic situation, improved unemployment and more saving. Since the survey started in 1985, it has never had a positive balance. That dim baseline helps to put the survey result in context. The downward trend over the past year, however, is more concerning.

We have entered a cycle in which every data release is scrutinized for any signal of bad news.  Confidence measures give us a “meaningful clue as to the economy’s strength.” In Europe, they are making the case for caution; in the United States, they give reason for optimism for consumers and are not yet flashing red for business investment. No one opinion is perfect, but used appropriately, these soft measures can yield hard insights.