Unrest in Hong Kong and limitations of monetary policy have no easy solutions.

Hong Kong has bridged the East and the West for centuries. Its location positions it ideally to facilitate exports from China and imports from the rest of the world. After the Opium War of the 1840s, the commercial importance of Hong Kong led the British to secure the territory as a spoil. As a royal colony, Hong Kong adopted British laws, governance and customs while maintaining its Asian identity. This combination allowed Hong Kong to emerge as one of the world’s leading economic centers.

Hong Kong was remanded from the United Kingdom to China in 1997, with the promise of considerable autonomy under the “one country, two systems” rubric. But in recent years, real or perceived incursions from the mainland have left Hong Kong’s residents uneasy. In March, an extradition bill allowing suspected Hong Kong criminals to be tried in mainland China led thousands to the streets. Over the summer, the protests have gained intensity.

The demonstrations come at a delicate time. Hong Kong’s economy has struggled amid trade tensions between the United States and China, and the unrest has depressed commerce further. Hong Kong itself has become part of the contretemps, with Washington warning Beijing against aggression. The Chinese response will be critical not only for Hong Kong, but for a broad range of stakeholders.

Economically, Hong Kong has prospered under Chinese authority. Real gross domestic product (GDP) has more than doubled since the change of control. The port of Hong Kong is the seventh-largest in world, and the Hong Kong stock exchange is the sixth-largest in the world. Hong Kong’s residents enjoy a high standard of living. 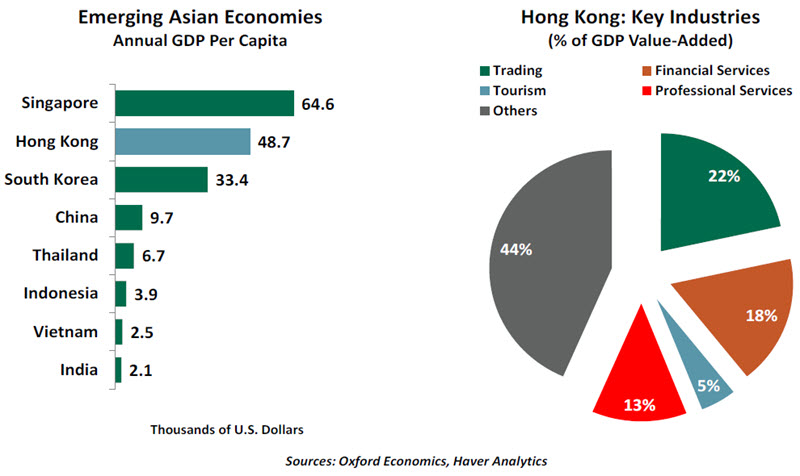 Many attribute Hong Kong’s economic progress to the relative sovereignty Beijing has afforded it. Hong Kong has its own currency and its own central bank to manage it. Hong Kong’s markets operate under Western-style laws and regulations that provide comfort to investors. Free of the media control imposed on the mainland, Hong Kong residents have unfettered access to information. The Heritage Foundation has ranked Hong Kong as the world’s freest economy for 25 years in a row.

These qualities have made Hong Kong a favored destination for international expertise and international capital. The number of multinational firms making their regional headquarters in Hong Kong has increased substantially over the past two decades. Almost 5% of Hong Kong’s population is composed of expatriates, and the Hong Kong airport is among the busiest in the world for both cargo and passengers.

“Western laws and regulations have been central to Hong Kong’s success.”

China has taken full advantage of Hong Kong’s financial system, with a number of its companies listing their shares on the Hong Kong exchange. (The Chinese central bank has also issued debt in Hong Kong.)  Global investors view the Hang Seng exchange as an ideal entry point to buy Chinese assets. While equity markets in Shanghai and Shenzen aspire to one day rival Hong Kong, such an outcome would require substantial structural reforms.

Hong Kong has also been a favored destination for visitors from mainland China, whose appetite for retail goods and property has boosted Hong Kong’s GDP. Clearly, the two markets are heavily dependent on one another. While this has mostly worked to their mutual advantage, the global trade battles of the last year are bringing both of them down.

Ironically, present tensions are founded on concerns that Beijing was undermining the Hong Kong legal system, one of the pillars that have made Hong Kong valuable to the Chinese. Undermining the current structure could make it harder for Chinese firms and the Chinese government to attract capital. Beijing certainly realizes this, and their desire to preserve the value derived from Hong Kong’s markets has informed their reaction to the protests.

To this point, China’s response has been measured. Investment and tourism from the mainland have been discouraged, and China has placed pressure on Hong Kong companies to dissociate themselves from the protestors. Reduced cross-border commerce has combined with international trade constriction to push the Hong Kong economy close to recession.  Beijing is hoping economic pressure will be sufficient to quell the uprising. 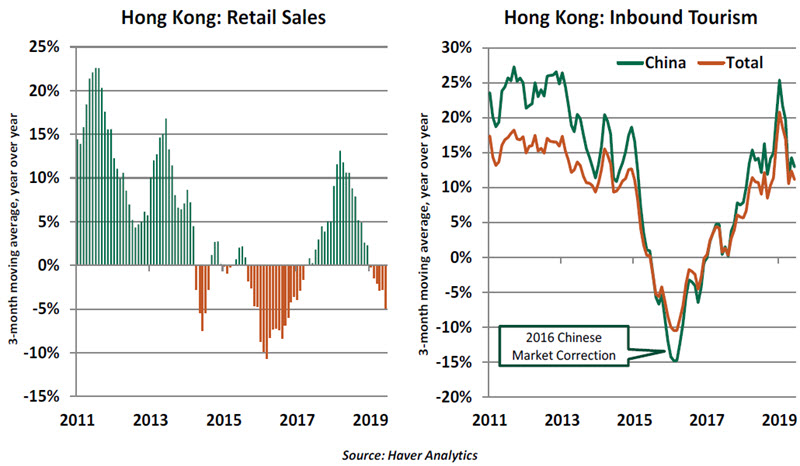 If suasion fails, a more forceful intervention might follow. The military equipment massed on the Hong Kong border is a threat for now, but deployment cannot be ruled out. A heavy-handed intervention could prompt a substantial flight of people, firms and capital, which would harm both sides. And 2019 marks the 30th anniversary of the unfortunate events in Tiananmen Square; China will certainly want to avoid an echo of that occurrence.

“China derives a lot of value from Hong Kong, and would like to preserve it.”

Experts are divided on the extent to which China is still reliant on Hong Kong for access to international capital. The Brookings Institution wrote recently that the Chinese could march on independently, while the Peterson Institute disagrees. Beijing would likely prefer to make any transition gradually, but the current level of dissent may force its hand. Failure to quell the unrest in Hong Kong might serve as an invitation for groups in the mainland to consider expressing similar defiance.

The situation in Hong Kong has attracted the attention of the White House, which has encouraged China to show restraint. This will not play well in Beijing; China, after all, does not publicly offer advice on how the U.S. should handle its domestic affairs. The list of contentious issues between America and China continues to grow, making a broad resolution of differences more difficult to achieve. The best we might hope for in the months ahead is no further provocation; an accord seems a long way off.

In all likelihood, the protests will eventually dissipate, as the Occupy movement did five years ago. But the damage to Hong Kong’s attraction as an economic center could be lasting. The uncertainty surrounding the sovereignty and stability of Hong Kong could limit inbound investment and give pause to foreign firms and workers in the principality. One of the few remaining links between East and West may be in danger of breaking.

Staying Out of the Hole

Five years ago at the annual monetary policy conference at Jackson Hole, pressure was mounting on the Federal Reserve to give clues about how it intended to roll back the easing policies that had lifted economy out of a hole. At this year’s gathering in Wyoming, the pressure is mounting on the Fed and other central banks to show how they will prevent the global economy from slipping into another one.

Deteriorating global growth prospects amid heightened uncertainty about global trade have led to a dramatic shift in monetary policy direction this year.  A growing number of central banks have already eased or are considering easing monetary policy, ending a brief period of intent to bring interest rates and balance sheets back to normal levels.

More than 30 central banks across advanced and emerging markets have cut interest rates this year. The Council on Foreign Relations’ Global Monetary Policy Tracker, consisting of data from 54 countries, reversed its course in January 2019 and has trended easier ever since. In August, central banks in Mexico, India, Thailand, the Philippines and even New Zealand cut their benchmark rates. Mexico’s cut was its first in five years, while the Reserve Bank of New Zealand reached a record low policy rate.

The People’s Bank of China (PBoC) hasn’t moved its benchmark interest rates since 2015, but has been deploying other measures to boost the economy. In an effort to improve monetary policy transmission, the PBoC took steps earlier this week to bring average loan rates down.

Among the larger central banks in the West, the European Central Bank (ECB) has explicitly indicated its intent to ease. A recent round of gloomy data combined with rising risks of a no-deal Brexit raised market expectations of a Bank of England cut this year to above 50%. And although it has little room to maneuver, the Bank of Japan has shown openness to additional easing. 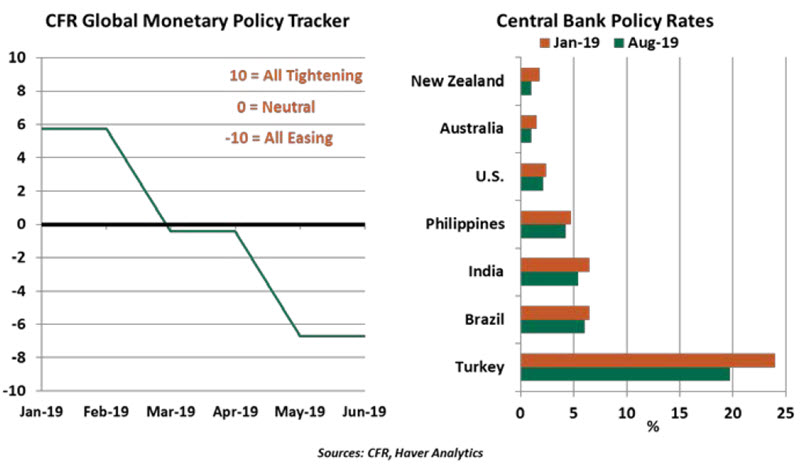 “With interest rates at low levels, the policy transmission mechanism could shift to currencies.”

With both interest and inflation rates stuck at historic lows in key markets, standard monetary tools may not be enough to boost growth, especially if the slowdown becomes a downturn. As a consequence, currency depreciation could become the default option for transmission of monetary policy. Central bank decisions, in most cases, are not explicitly tied to exchange rate movements, but the line is becoming blurrier.

As an example, the Reserve Bank of Australia’s June meeting minutes mentioned that “the main channels through which lower interest rates would support the economy were a lower value of the exchange rate.”  Transmitting policy through exchange rates, intentionally or otherwise, is not only a risky zero-sum game, but would also draw America’s attention.

The challenges faced by those gathering in the Rocky Mountains this week are formidable. They are being asked to counteract restrictive trade policies and offset the secular forces that are reducing inflation. The tools they have at hand are not well-suited to these objectives, and deploying them could create distortions in financial markets.

The solution might better come from more aggressive public spending. ECB president Mario Draghi will be missed at Jackson Hole this year, but his remarks from the 2014 symposium that “it would be helpful for the overall stance of policy if fiscal policy could play a greater role alongside monetary policy” are worth remembering. Central banks were the only game in town ten years ago, but other players may need to take the lead going forward.

Tensions and uncertainty are boosting global bond markets. Developed markets are witnessing massive capital flows into sovereign debt that are pushing down yields across all maturities. These shifts have caused inversions in which shorter-dated notes pay a higher yield than longer-dated bonds. Inversions often occur before recessions, causing more flight to quality and further depression of yields.

Yields move opposite to prices; as bonds are bid up by eager buyers, their yields fall, even into negative territory. In the current environment, almost 20% of global government debt carries a negative yield; owners of those securities are willing to forego interest payments in order to be ensured repayment of their principal.

Though this is a deviation from typical fixed income investment, it is not without precedent. Before modern financial markets, investors accumulated land, art, gold and other physical assets that were costly to acquire and protect. And the trend toward negative yields is only novel in that nominal yields have now gone below zero. (Real yields have often carried a negative term premium, making risk-free bonds costly after adjusting for inflation.)

“Increasingly, investors are willing to pay for the privilege of owning sovereign debt.” 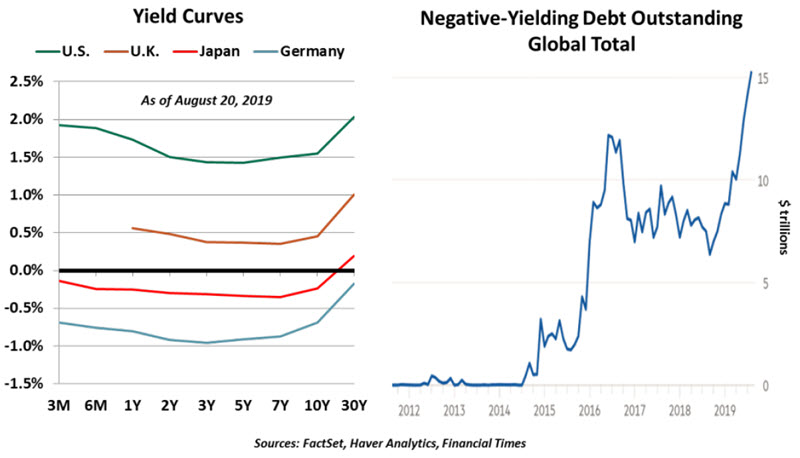 Surging government debt has traditionally been fodder for political arguments against further spending. However, issuing debt with negative yields is bizarrely accretive to a country’s fiscal position: The added debt expands a government’s ability to spend while placing no additional interest burden on taxpayers. As long as demand for these instruments remains strong, national treasuries will feel free to continue issuing new debt.

The world’s bond markets are showing clear concern over the direction of the global economy. The risk aversion reflected in negative yields is at odds with the relatively buoyant performance of equity markets, which seem to reflect a much more sanguine outlook. As we mentioned at mid-year, reconciling these two perspectives will be a challenge for investors throughout the balance of 2019.