What shifts from tariffs to currency mean in the US-China trade war.

I would never have guessed Door County, Wisconsin, would be a preferred family destination. My children are active and cosmopolitan, qualities that are mismatched with the slow pace and rustic settings characteristic to the peninsula. What’s more, the cellular service is spotty, which leaves them intermittently disconnected from all they hold dear.

Nonetheless, the gang looks forward to the summer sojourn. Door County is a place where laziness is allowed, even celebrated. The most complicated decision faced during the week is which of the 30 flavors to choose at the ice cream shop (Mocha Chip, for me). And the remove from the never-ending news and opinion cycle is incredibly restorative.

Unfortunately, the reverie can end quickly upon re-entry. Such was the case this year. As I caught up on reading during this past weekend, it became clear all was not well with the world. Economically, the threats to global growth are escalating, while the leadership to deal with them is in decline. More broadly, the risk of an adverse tail event is uncomfortably high. We will do well to make it to the end of the year without incident.

Following are our views on the most challenging situations we presently face. I suspect we’ll be talking quite a bit about each of them in more depth as the year wears on.

When Presidents Trump and Xi announced the resumption of talks at the June G20 meeting, we were skeptical (see here). We didn’t expect much progress, but we didn’t expect tensions would reach new heights less than six weeks later.

Frustrated by a lack of movement in negotiations (the two sides reportedly spent only three hours together at their recent summit in Shanghai), President Trump announced the broadening of tariffs against Chinese products. China retaliated by forbidding purchases of American agricultural products and allowing its currency to decline in value. The barbs passing back and forth between Beijing and Washington have sharpened.

“Economic relations between China and the United States have hit a new low.”

Both sides feel time is on their side. As we wrote last spring, many in China think delaying until the 2020 U.S. election will allow them to work with a more sympathetic American leader. That could turn out to be a miscalculation. A serious market correction could also put pressure on the Americans, but U.S. equity markets have been resilient amid the rising friction.

Confronting China on its trade practices is an effort that has broad support in the United States and in many other countries. But gaining a meaningful realignment will only come at a cost. The question is whether the West is willing to pay that price.

Bilateral discussions are still scheduled for next month in Washington, but hopes are not high. The damage to the global economy caused by the impasse is accumulating.

The willingness to execute a no-deal departure is a promise to some, a negotiating ploy to others. As he pursues his aggressive tack, Johnson may feel the need to call elections in an effort to solidify his support. That could backfire, leading to a Labor government that is anti-business. 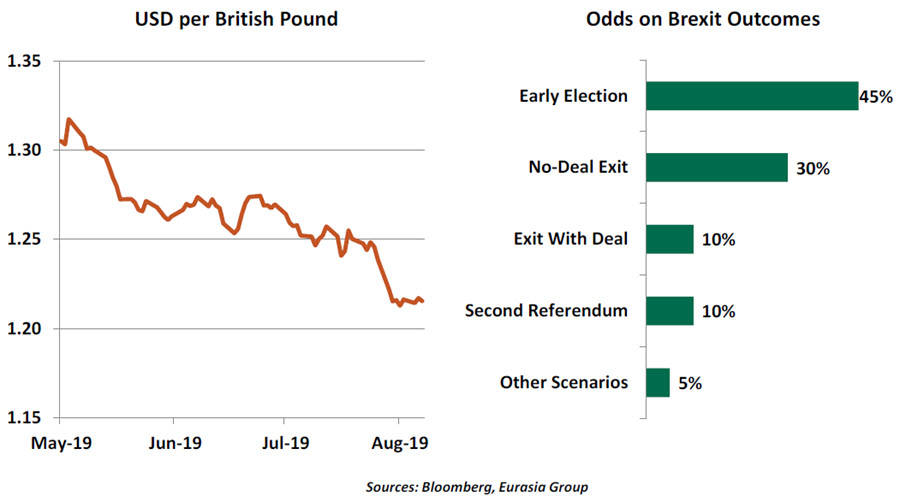 Johnson has also said he would not support a “backstop” arrangement that would head off the establishment of a hard border between Northern Ireland and the Republic of Ireland. As we wrote earlier this year, this is one of the most critical aspects of Brexit, with consequences for commerce and for the stability of the United Kingdom.

The British pound came under fresh pressure last week, and now stands almost 20% lower than it did before the Brexit referendum. That is not a good deal for the United Kingdom.

“A global diplomatic void has raised a host of tail risks.”

There are other global discomforts, but I will stop here for fear of piling on. The international community’s ability to address these situations collectively has, unfortunately, been compromised by rising nationalism across the globe. Diplomacy is now seen as a weakness and not a strength.

So it took all of four hours last Monday morning for me to wish I was back in Door County, where the only thing people fight over is who has the best cherry pie. For now, la dolce vita is over.

U.S.-China trade tensions have spilled over to the currency markets. Earlier this week, the Chinese renminbi (RMB), usually a tightly controlled currency, breached the threshold of 7 to the U.S. dollar for the first time in 11 years. The RMB move didn’t go down well with the U.S. administration.

Shortly after, the U.S. Treasury designated China a “currency manipulator.”  This isn’t the first time China is finding itself on that list; that label was last used 25 years ago. The designation carries little direct impact, calling for the Treasury to participate in talks with the country in question, bilaterally or through the International Monetary Fund (IMF). The IMF is unlikely to side with the U.S. stance, as just last month the IMF concluded that China’s exchange rate was in line with “fundamentals and desirable policies.”

Though China still manages its currency actively, market forces also play a role. The weaker Chinese economy and the U.S. administration’s stance on trade have been compelling investors to sell the RMB, pushing the value down. While there is little doubt that China (like several other export-dependent emerging economies) has weakened its currency, particularly between 2003 and 2014, most recent interventions have instead been to prevent the currency from weakening too much further.

There is no dearth of supportive measures available to Chinese policymakers. They can fix the starting rate for daily trading of the currency, sell RMB-denominated financial instruments and tighten capital controls further to prevent market flight. However, their lack of intervention in letting the RMB slide served as a reminder to the United States of the downside of escalating tensions.

A cheaper RMB would not only harm U.S. exports but will also erode the effectiveness of American tariffs. Dollar strength is something President Trump has openly complained about in the past.  The implications of devaluation will go far beyond American and Chinese borders. Devaluation will create pressure for Asian countries (like South Korea and Taiwan) and potentially disrupt trade and investment flows for emerging markets. A few Asian currencies have already come under pressure as fears of a competitive devaluation policy are spreading. In the worst case, what started on the trade front between two nations could snowball into a global currency war, a risky zero-sum game.

‘Weaponizing’ the RMB might yield some near-term benefits for China but will have far reaching repercussions for the broader economy and the financial system. Capital flight will be a big concern as a further depreciation of currency could exacerbate capital outflows. In 2015 and 2016, when the RMB was under sustained pressure, Beijing recorded net capital outflows of more than $725 billion, despite its relatively closed capital account. Policymakers also burned their foreign exchange reserves at an alarming rate (around $1 trillion between mid-2014 and end-2016) to stem the tide. 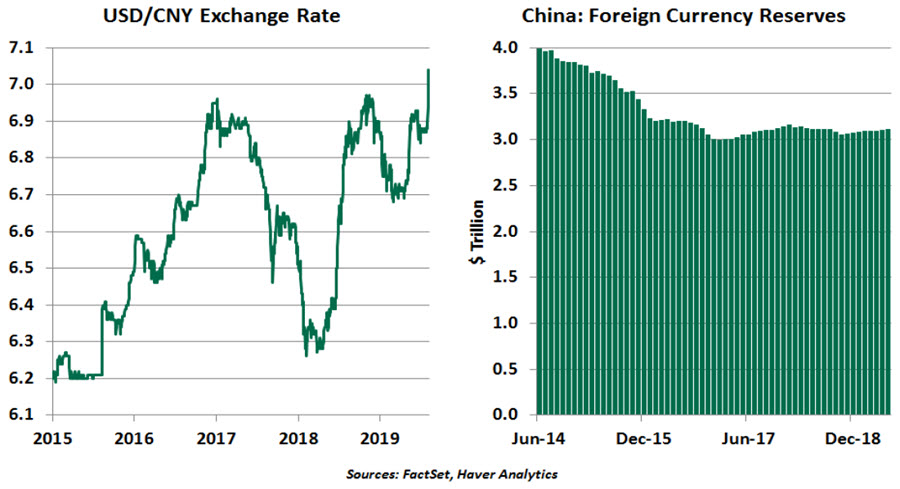 “The “manipulator” label is symbolic but will not reduce trade tensions.”

A weaker currency could trigger defaults on domestic dollar-denominated debt, especially in the real estate sector, and hamper the government’s efforts to rebalance the economy from exports to consumption. In addition, further depreciation of RMB would only erode international confidence in China’s economy, making it a less attractive destination for foreign portfolio investments.

The People’s Bank of China is likely to continue to intervene to keep the pace of depreciation against the dollar gradual. This was displayed in the central bank’s action when it fixed the daily rate of the RMB at 6.9683 on Tuesday, a day after being labeled a “currency manipulator.”

Beijing has enough incentives and tools to prevent an aggressive devaluation of currency, but the motivation to deploy those could lessen as the hostility deepens. A Financial Times article summed the situation up perfectly by using an old saying: “Before you embark on a journey of revenge, dig two graves.” If the disorder spreads to the broader currency markets, there will be far more graves to dig.

The latest tariff threats add fuel to a conflict that had been cooling. We welcomed the reprieve from further escalation at the G20, but as we suspected, the good feelings were fleeting.

The U.S. tariffs on Chinese goods have been structured thus far to minimize any effect on consumer prices. Initial rounds were applied to capital goods and intermediate products. As tariffs spread to consumer goods, they were limited to durable items that are purchased infrequently, like tires. Though prices did increase in these categories, consumers did not feel a difference, nor were these durable goods a large enough component of market baskets to move inflation measures noticeably. Now, as tariffs are set to spread to products including footwear, toys, diapers and electronics, price changes will be more apparent, both in aggregate measures and in the checkout line.

If the expanded tariffs go into effect, inflation is likely. Tariffs are a tax paid by importers, a cost that is offset by supplier price concessions, absorbed into profit margins or passed on to buyers.  Margins in manufacturing and retail sales are slim, making price increases nearly inevitable. The New York Fed estimated a cost of $831 per household for the last round of tariff escalation, while Oxford Economics forecasts the latest threats would be an additional cost of more than $200 per household.

“A wider range of tariff line items increases the odds of inflation.” 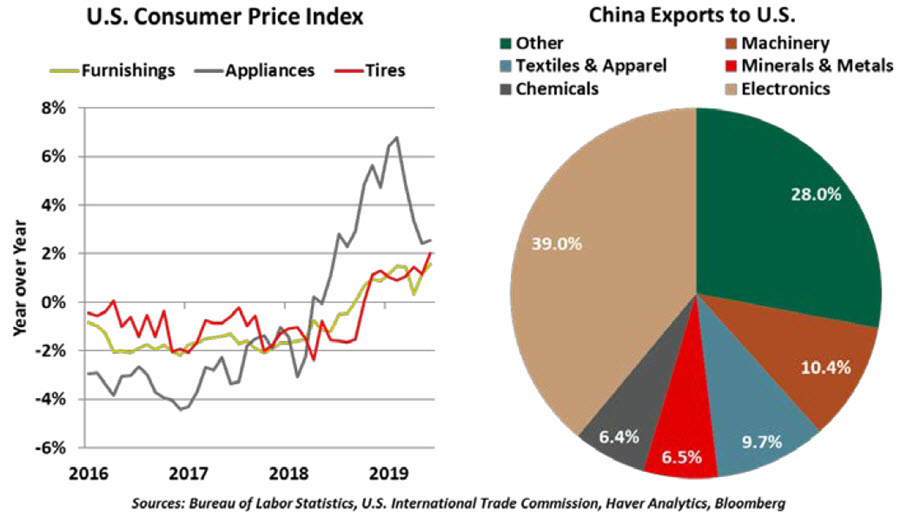 Over the longer term, inflation will fade. Consumers may slow their spending, and prices will fall in response to lower demand. Global supply chains may, in time, move out of China to avoid tariffs, though these realignments are costly and do not remove the risk of future exposure to tariffs.

The U.S. economy has been surprisingly resilient so far. Consumer spending and confidence have yet to recede as the terms of trade have shifted, though businesses are nervous. The U.S. administration has deferred or cancelled tariff threats before, and cooler heads may yet prevail.  Consumer spending peaks during the back-to-school and holiday seasons, but more tariffs could chill the best-performing component of the U.S. economy at exactly the wrong time.