Closing the books on 2019, a year of major economic developments. 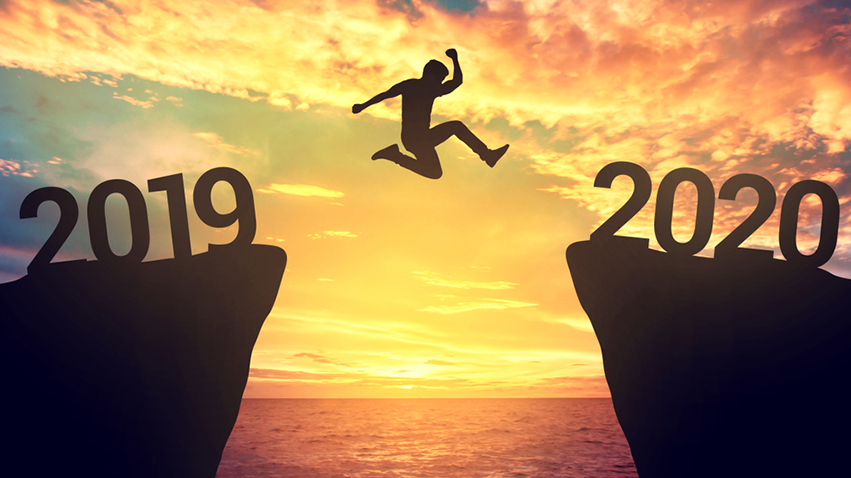 Editor's Note: As always, we close our year with a handful of essays on the top stories we covered during the last 12 months. Please accept our warmest wishes for the holiday season, and we hope you and yours have a happy, healthy and prosperous 2020.

You Can Go Your Own Way

For decades, multilateralism – when three or more countries’ governments work together – has served the world well, making significant contributions to global economic growth and standards of living. But the world is increasingly becoming more polarized amid rising nationalistic and protectionist sentiment. Important international institutions are facing existential challenges. All of this creates risk for the current global expansion.

The United States led the way in establishing institutions such as the United Nations (UN), the International Monetary Fund (IMF) and the World Trade Organization (WTO), which form the core of the international economic order. But support for these entities is waning.  The United Nations has been hindered because member nations are delinquent in their dues. This could impair peacekeeping and development activities the UN undertakes.

The WTO has reached a breaking point, as its appellate body no longer has enough members to adjudicate trade grievances. Ironically, it is the United States that precipitated this outcome by blocking new appointments to the panel, even as the WTO has many claims pending. Trade disputes are now being settled on the frontier with tariff battles. 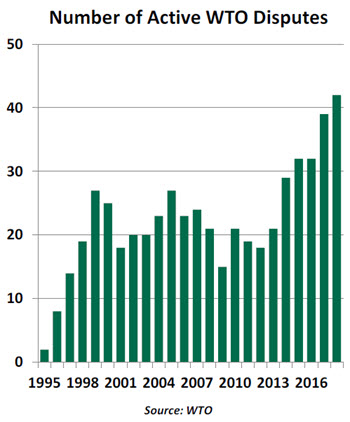 The IMF, which provides financial assistance to struggling countries, prevents local problems from affecting global markets. It, too, is struggling with a heavy caseload and light resources

Multilateralism is not just about trade or investments. It is also about developing and maintaining rules-based economic and social relations among countries. Large-scale, critical issues like income inequality, climate change, human rights, poverty and conflict call for large-scale international solutions.  Undermining international cooperation will inexorably harm everyone, and not just economically.

Trade tensions have added a new challenge for economic forecasters. The global economics research team, along with our partners across Northern Trust, spent much time this year deliberating how tariffs could alter commerce. The closest case study of the U.S. passing a broad set of tariffs was the Smoot-Hawley Act of 1930, an era not comparable to the modern economy. (We also found it a bit extreme to call for another Great Depression.) But the recent tariffs were a new cost and a disruption to established global supply chains. Something seemed likely to break.

The economic resilience we observed this year has been a pleasant surprise. Economic growth has been steady, especially in the United States. Consumers are showing strength with falling unemployment, steady wage gains and solid readings from confidence surveys.  Equity markets have sometimes reacted to trade headlines, but we have not seen a sustained selloff. Our fears of tariffs causing inflation were not borne out; the costs of tariffs were absorbed into margins or were so narrow in scope as to not put undue pressure on the price level. 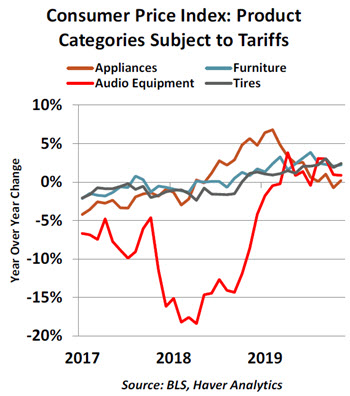 None of this is to suggest that the tariffs have had no effect. Prices of specific product categories subject to tariffs have increased noticeably. Goods-producing enterprises have started to diversify their sourcing, compounding the pain of a cyclical slowdown in China. And uncertainty about the terms of trade has sent shocks around the world: Business sentiment has fallen in a variety of measures, notably the purchasing managers’ index (PMI) survey. Export-dependent regions like Japan and the eurozone have hovered uncomfortably close to recession this year.

The year is ending with a welcome turn away from further tariff escalation, as the United States and China work to finalize a limited trade agreement. While the United States has been able to absorb tariffs thus far, we hope they are past their peak.

At the beginning of last January, the 10-year U.S. Treasury note offered a yield of 2.7%.  Forecasters polled by the Blue Chip publications at that time reached the consensus that the 10-year yield would rise to 3.3% at the end of 2019. The average of the lowest 10 projections called for rates to remain unchanged during the year.

As of this writing, the 10-year U.S. Treasury yield is about 1.9%, well below what most expected. While economists did a reasonably good job of projecting U.S. growth and inflation this year, they missed long-term interest rates by a mile. Similar outcomes were seen in a multitude of other countries. This miscalculation occurred despite rising public budget deficits and core inflation that ended the year fairly close to where it began. Real yields in the developed world are consequently either very low or negative.

Why did this occur? A multitude of theories have been advanced. Many central banks ended up increasing their balance sheets this year (or in the case of the Fed, reducing them by much less than expected). This created unforeseen demand for bonds. Investors have been challenged by a multitude of global uncertainties, which may have boosted demand for safe assets. Some expect future inflation to fall further, thanks to downward pressure on the price level from secular sources like e-commerce. If this occurs, bonds will become more valuable. 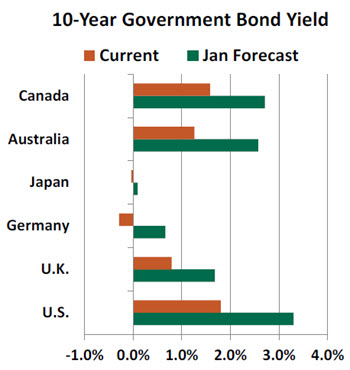 While the origins of the yield collapse are not entirely clear, the consequences are. Savers are being hindered; portfolios are struggling to achieve targeted returns within risk tolerances; and pension systems are under stress. Many would like to see interest rates head upward in 2020, but a reversion to last year’s levels seems like a remote possibility. We may have to live with lower for longer much longer than we would like.

“There are, however, no recent precedents to guide any policy response to the current situation.” – Jerome Powell, August 23, 2019

Central banks have acted decisively to support the expansion this year. The trend was global, with 60 banks cutting policy rates. Among major financial centers, the U.S. Federal Reserve made a 180-degree turn from a rate hike last December to three cuts starting in July, while the European Central Bank took policy rates further negative to support their region.

“Central banks have reached the edges of their effectiveness.”

The central banks’ decisions can be thought of as insurance against recession. Very few economies contracted or saw an increase in their unemployment rates this year, and that is to be applauded. However, the upside of all this accommodation was limited. Economic growth has been tepid across the board. Low costs of debt have not led to a surge in corporate or government investment. Wage gains were unremarkable for most workers. And of particular interest to central banks, no country is witnessing much inflation despite these low interest rates. 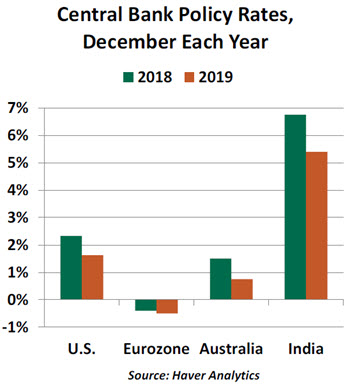 Inflation has become a structural challenge. Holiday shopping reminds us of e-commerce’s prevalence and the easy price comparison it facilitates. Automation has replaced many workers who perform routine tasks, reducing wage pressures that can lead to inflation. Aging consumers make fewer purchases and prefer stable prices as they adapt to fixed incomes. And low inflation can start a self-fulfilling cycle, weighing on expected future inflation rates. Minor rate adjustments cannot overcome this array of forces holding inflation down.

As Chair Powell alluded to in his Jackson Hole remarks and several press conferences, the monetary policy toolkit cannot be applied to all challenges. Fiscal policy will have to play a greater role. While expanded government spending is often a controversial topic, it would be a shame to let these low rates go to waste.

In response to the 2008 financial crisis, countries around the world embarked on an extraordinary level of intervention to keep their economies buoyant. With the global expansion losing steam amid elevated uncertainties and monetary easing reaching its limits, the case for another synchronized fiscal response is gaining momentum.

Fiscal policy has already become more stimulative in some countries. The effective tax rate in the United States was slashed under the 2017 Tax Cuts and Jobs Act. The U.K. government has recently laid out the roadmap for fiscal boost, while in Asia, both China and India have also been easing. Japan recently announced a large stimulus package.

“Budget expansion is coming, but must be done intelligently.”

Going forward, Germany will be a key player on this front. With public debt significantly below others in the eurozone, negative interest rates, and a budget surplus, Germany has adequate room to loosen fiscal policy by enacting tax cuts and spending more on infrastructure.

Now is the most suitable time for countries with room in their budgets to deploy their fiscal firepower to stimulate growth and inflation. With rates going down or expected to stay on hold, fiscal policy will likely prove to be more effective and less burdening. That said, not all countries have room to ease. Public debt has skyrocketed in both advanced and emerging economies. High debts coupled with deficits and their associated financing needs not only leave countries vulnerable to interest rate hikes but will also diminish their ability to respond in the event of a downturn. Hence, fiscal policy must focus on reforms that raise long-term potential growth while reducing the debt burden. 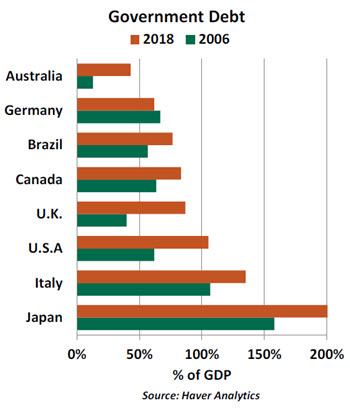 Policymakers need to act swiftly in order avert a sharper slowdown next year, as fiscal policy changes move the real economy with a lag. But a call for an active fiscal policy is not a call for fiscal imprudence. Reckless fiscal spending will lead to more pain than gain.

In 2006, the Al Gore-produced movie “An Inconvenient Truth” warned about the advance of climate change. The film had its critics at the time, but if anything, the film’s predictions underestimated the warming of the globe in the intervening years.

The consequences of climate change are subtle, and manifest themselves over a very long period of time. For these reasons, the issue is easily deferred. Throw a healthy dollop of geopolitics over the top, and you have a recipe for inactivity. But the attention paid to climate change as an economic issue is advancing. More and more investors are seeking sustainable portfolios, and firms are taking corporate social responsibility very seriously. 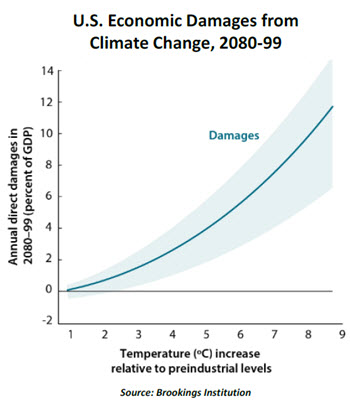 This year, central banks weighed in more directly on climate change, noting potential adverse impacts for economies and financial markets. Christine Lagarde, the new president of the European Central Bank, said last week that addressing climate change would be “mission critical” during her tenure. Supervisors are increasingly asking banks and insurance companies to take account of climate risk when pricing exposures, which will force firms and individuals to take better account of the cost of a changing environment.

“Climate change is an important issue, but central banks must approach it carefully.”

Yet even those who are concerned about climate change worry central banks are engaged in mission creep. Monetary authorities might best focus their attention on their mandated mission: getting inflation back to targeted levels. And given the climate challenge’s global nature, individual central banks will have only a limited impact on outcomes in this area.

Central banks’ greening could expose them to more political opportunism. Why stop at the environment, some might ask. Modern monetary theory would direct central banks to finance a whole host of social initiatives, something we would not endorse. The independence of central banks came under attack in a range of countries this year, a troubling trend which we hope will recede. While well-intentioned, central banks might do the public greater service by staying out of the climate fray.