A rundown of factors the Fed will consider as it approaches its last meeting of 2019.

Last December, the Federal Reserve raised interest rates for the ninth time in four years and suggested that further increases were likely.  So much for forward guidance.  This year, the Fed has cut rates three times, reduced its long-term rate expectations, and ceased its balance sheet runoff.  The Fed’s decisions were blamed for contributing to a yield curve inversion and then credited for reversing it.

All this occurred despite a year of good economic growth, low unemployment and stable inflation.  The Fed justified its retreat as a “midcycle adjustment” that aimed to address downside risks created by global trade tensions.  That done, now is a good time to pause and take stock of where conditions stand.  Here is our take on where things stand, and where things might go from here. 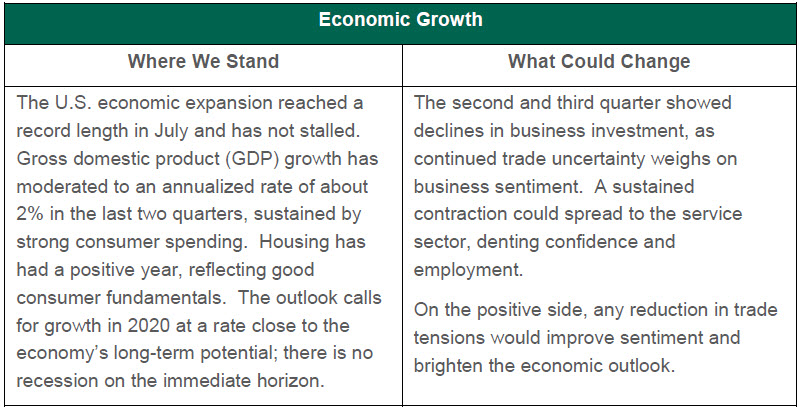 It bears noting that U.S. economic activity has been sustained in spite of fading support from the 2017 tax reform bill.  That measure appears to have created some short-term stimulus, but little lasting impact on potential growth.

The greatest challenge for the Fed this year has been adapting to a new era of trade restrictions and retaliations, problems that monetary policy may not be well-suited to offset.  Nonetheless, the Fed’s dual mandate requires it to make the attempt.

Throughout the year, the Fed’s press releases and commentary indicated it would “act as appropriate to sustain the expansion,” and the removal of that phrase from the October post-meeting statement was a signal that rate cuts would cease.  We don’t expect a resumption anytime soon. 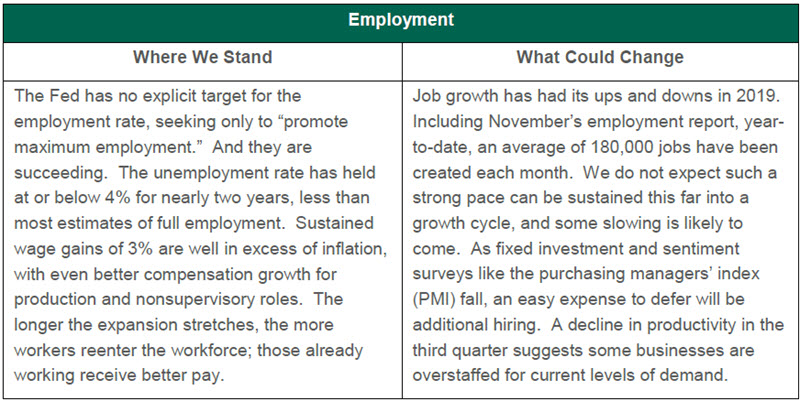 Employment has been a continued source of upside surprises in this cycle.  Jobs are still 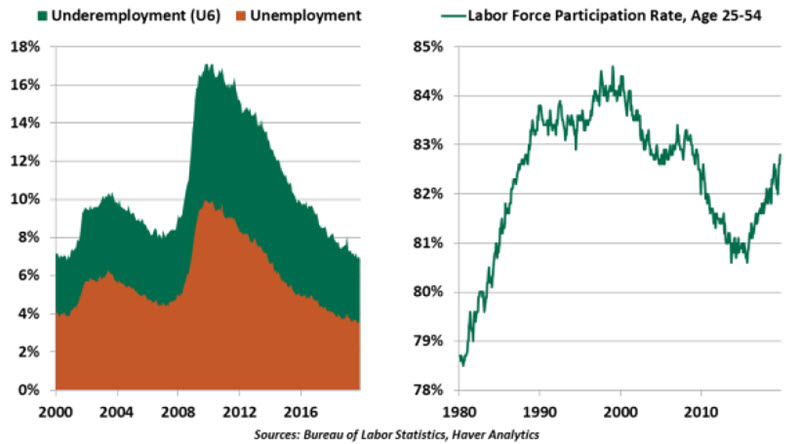 being created, unemployment is low and wages keep rising.  The labor force participation rate for prime-aged (25-54) workers is holding at a cycle high of 82.8%, though this remains below the peaks seen in the past two expansions.  Job openings have fallen from a record high level at the start of the year, but hiring rates remain elevated.

In several speeches, Fed officials have pointed to increased employment among lower wage earners as a sign the expansion still has room to run.  Recent experience is giving us a window into what “full employment” truly means. The difference between working and not working is a dramatic lifestyle shift for workers on the margin of employment.

The workforce has continued to grow for a variety of reasons: older workers deferring retirement, workers coming off disability rolls, increased willingness of employers to invest in training their new hires, and more “gig” opportunities to work independently.  Together, these marginal developments have helped align labor supply and demand to the benefit of both workers and employers. 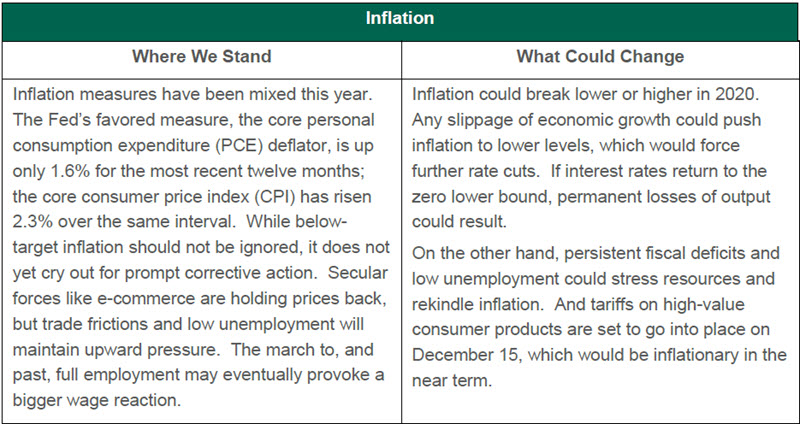 The Fed has been conducting a series of sessions aimed at revisiting and refining its inflation target.  One possible strategy got some attention this week: if inflation falls persistently below the desired level, the target will be raised so that below-target intervals are offset with overages.  If this paradigm were in operation today, eight years since inflation has been above its target, it would certainly force the Fed into an easing bias.

But a critical question remains: if the Fed is struggling to hit a 2% target, what gives it confidence that it could reach 2.5%?  And if the rate cuts needed to produce that outcome encourage investors to reach for yield, financial stability might come under threat.  For these (and other) reasons, we continue to think significant alterations to the Fed’s approach are not imminent.

The challenge of balance sheet management has been one of the more prominent stories surrounding the Fed this year.  The Fed has had persistent difficulty gauging the amount of reserves to provide financial markets.  New capital and liquidity rules, along with market changes as a result of the 2010 Volcker Rule, have limited the willingness of banks to sell short-term funding.  As a result, overnight interest rates have spiked on several occasions in 2019.  Year-end is often a volatile interval for money markets, and some participants are concerned that this one will be especially stressful. 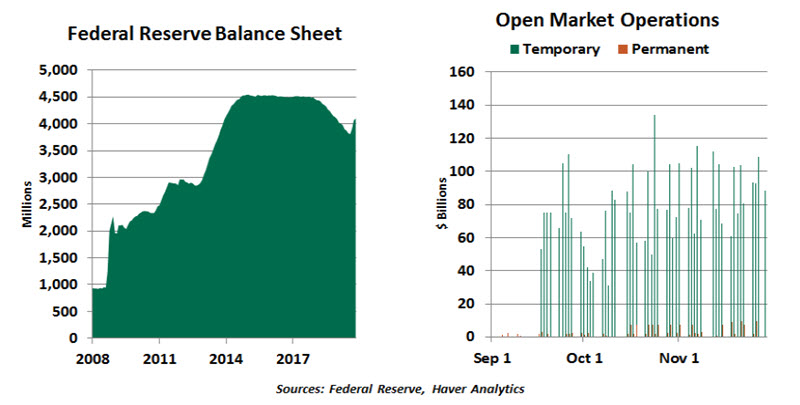 Financial markets have performed remarkably well this year, in spite of a long series of potential threats.  Equities have set records, credit spreads remain narrow, and volatility has receded. But there is no shortage of issues that could try investor patience next year. Difficult situations in a number of places (Iran, Hong Kong, South America) could break badly next year. And the 2020 U.S. Presidential election is already generating considerable anxiety.

The October 30 Fed meeting concluded with refreshingly clear guidance that the Fed will stop its rate adjustments.  We expect the committee to be conservative in any future actions.  The Fed has said it is following the playbook of past adjustments to sustain expansions, as we saw in 1995 and 1998, with three rate cuts followed by a pause. October was the third cut of this cycle.

Further movements are possible from here but unlikely to be needed in the year ahead. Broad economic underperformance could necessitate rate reductions, and renewed risks could prompt more pre-emptive easing.  But this is not our base case. Rate hikes are possible if inflation is sustained above its 2% target, an unlikely circumstance.  We expect the Fed’s updated forecasts and dot chart to suggest it will be much less active next year.

The greatest risk to the U.S. economy is sluggish business investment caused by trade uncertainty.  The Fed will watch any developments in this area closely.  Any progress toward a resolution will support a prolonged pause.

The Fed’s focus will now turn to financial system stability as it strives to return to a stable overnight funding market with infrequent needs for liquidity injections.  We do not expect liquidity actions to have any bearing on the Fed’s interest rate decisions.

We’ll be offering immediate reflections on the Federal Open Market Committee meeting via social media.  And if past is prologue, we will undoubtedly have much more on the Fed in this space in the year ahead.