In this age of electronic entertainment and communication, it has been surprising to see bars using board games to attract visitors. Battleship, Connect Four and Trivial Pursuit have all found new life in these establishments, which are trying to buck the general trend towards more remote interaction (and also sell more drinks).

In this age of electronic entertainment and communication, it has been surprising to see bars using board games to attract visitors. Battleship, Connect Four and Trivial Pursuit have all found new life in these establishments, which are trying to buck the general trend towards more remote interaction (and also sell more drinks).

Among my favorite board games as a child was Clue, in which players move around a mansion as they try to solve a homicide. The goal is to ascertain the identity of the murderer, the weapon used and the room in which the deed was done. The true details slowly come to light through a process of elimination.

It is often said that economic expansions do not die of old age; something kills them. The murderer is often a policy mistake that hinders both sentiment and business activity. With our decade-long upswing showing signs of strain, the search for a suspect is on. If we can identify and apprehend the perpetrator in time, recession might be avoided.

Last summer, the world was still enjoying a synchronous expansion that promised to continue indefinitely. Growth was strong, unemployment was falling and markets were rallying. As always, there were known risks, but they seemed manageable.

Since then, the horizon has clouded. China is clearly struggling, the eurozone is flirting with recession, Brexit is torturing Great Britain and several emerging markets are under renewed pressure. Even the U.S. economy is slowing, although this was widely anticipated as the benefit of the 2017 tax reductions fades. 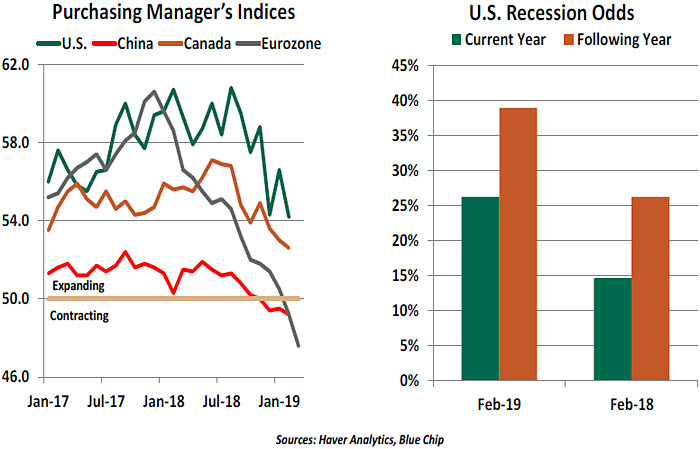 Leading indicators of global manufacturing have nearly come to a standstill. While services make up the lion’s share of output in most developed markets, manufacturing indicators still have a strong relationship with turns in the business cycle. Global interest rates have turned downward; the German 10-year yield recently dropped back below zero for the first time in three years, and the U.S. yield curve is mildly inverted in spots. Recession risks are rising. What has changed? The timeline and the geography of recent events provide important clues.

Global trade conditions started turning south early last year. This development seems to have been the product of three factors:

The effort has been a qualified success. Leverage is now rising more slowly, and the most risky forms of debt have been checked. But the new discipline has taken some of the steam out of economic growth in China and, by consequence, its trading partners. 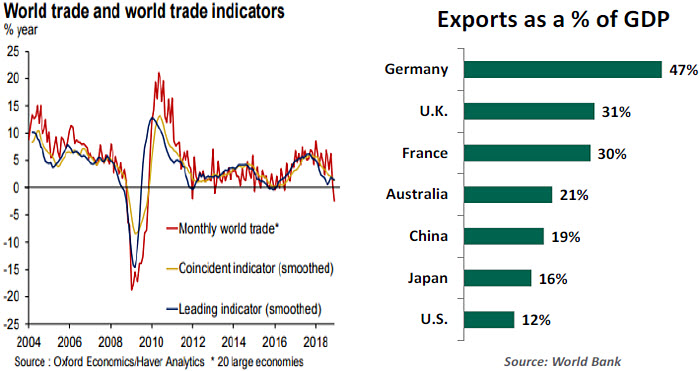 The nations most dependent on international exchanges have been among the hardest hit. Germany and China, economic leaders in their respective regions, have faltered. Multinational corporations have been forced to reconsider their carefully constructed global chains that optimize production and distribution; new restrictions come at a cost to both producers and consumers.

Our base case anticipates that trade tensions will recede during the balance of 2019. Negotiations between the United States and China have proceeded continuously over the past three months, with both sides motivated to reach an agreement. Discussions between the U.S. and the European Union are also progressing, which would head off an expansion of tariffs. And the proposed trade agreement between the U.S., Canada and Mexico should pass the Congress in the coming months.

Recession can be avoided, but risks are rising.

Central banks have recognized the risks in the environment and have changed their tones as a result. Earlier this month, the European Central Bank renewed its funding program for banks, and the Federal Reserve has adopted a much more dovish stance. Neither is primarily responsible for the recent malaise, but both want to take out insurance against bad outcomes. With interest rates stuck at low levels (or negative levels in some places), there isn’t a lot that monetary policy can offer if recession comes.

In the longer run, checking the skepticism over free trade will be challenging. It is the product of spreading nationalism, which is rooted in uneven economic outcomes. Unless and until policies prove more effective at restoring equality of opportunity, trade will remain a four-letter word in many corners.

Of course, the individuals leading the drive to close borders aren’t helping matters. There is no shortage of Colonel Mustards and Professor Plums about, who are willing to use lead pipes, candlesticks, or revolvers to press their nationalistic agendas. If they are not arrested before they achieve their ends, the decade-long global expansion could expire.

Though the likelihood of a full-blown trade war has moderated, the pushback against global trade does not bode well for regions like Latin America (LATAM), which relies on exports as an important source of revenue.

Latin America’s bumpy economic recovery has started to falter amid weakening inter- and intra-regional trade. The U.S and China are the most important trading partners of LATAM economies, together accounting for over half of its total trade. The U.S. economy is set to move into lower gear while the Chinese are already experiencing a significant slowdown. This is driving down demand for LATAM goods and will likely keep a lid on the prices of commodities (agricultural and mineral) produced in the region.

Latin American nations have found themselves in the middle of the economic tug-of-war between the United States and China. America is the traditional destination for many LATAM exports, but China has emerged as the largest international purchaser for a few regional economies such as Brazil and Chile. China’s exports to the region have grown in tandem. Countries are being pressured for a pledge of allegiance to one or the other.

Recent trade measures have provided some short-term gains to a few LATAM exporters. Brazilian and Argentinian soybeans filled the supply gaps created by Chinese tariffs and order cancellations on American imports. However, the increased likelihood of the U.S.-China trade deal means these limited gains will fade soon.

Some regional economies will lose more than others from weakening global trade and growth. The level of economic costs will depend on factors such as the extent of external or domestic imbalances facing an individual economy and exposure to trade with each of the major economies.

Mexico is a reasonably diversified and highly open economy. Trade accounts for 78% of Mexico’s gross domestic product (GDP), of which 80% are goods exports to the U.S. This concentration makes them less vulnerable to developments outside the United States, but also explains their willingness to make concessions in U.S.-Mexico-Canada Agreement negotiations. Mexico also has sound fundamentals: narrow fiscal and current account deficits, healthy foreign reserves and moderate public debt. 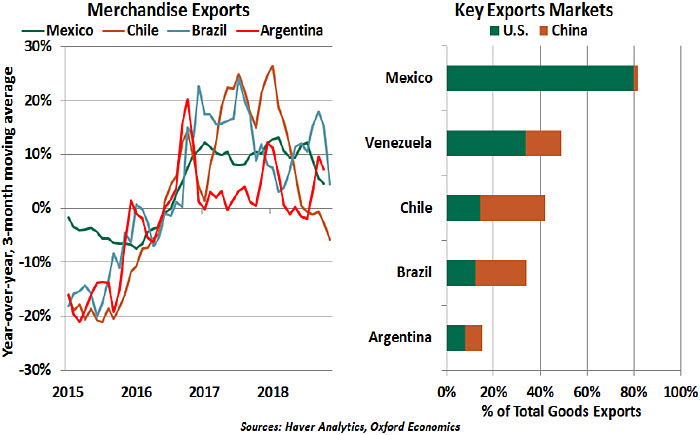 The Brazilian economy is less dependent on international trade. Exports and imports account for around 24% of its GDP. A slowdown in global trade will have a limited direct impact, but the economy remains exposed to lower global growth and tightening financial conditions. It is a large recipient of foreign direct investments and has high government debt.

Chile and Peru are the world’s largest and second-largest copper exporters, respectively. Copper exports account for 48% and 30% of their total exports. Both have already been hit by recent price volatility and have significant exposure to China. Healthy fundamentals will provide some cushion during stress, though elevated Chilean external debt is a concern.

Argentina, Colombia and Venezuela will be among the worst hit by a global slowdown. Argentina is already struggling. The country is highly dependent on primary products exports, and Brazil is its biggest export market. Argentina’s fiscal deficit is still wide, and it has the lowest ratios of international reserves within the region. Colombia is heavily reliant on oil, and its twin deficits create fiscal risk. And Venezuela is already in dire need of life support.

The countries that have kept fiscal deficits, leverage, external deficits and inflation in check are better placed to deal with the shifting global trade dynamics and slowing global growth. Those with an overreliance on commodities and debt will struggle. The region’s long-term path will depend on its ability to diversify its economy and its trading partners.

Last week, following a softer projection from the Federal Reserve and weak global manufacturing data, the U.S. Treasury yield curve inverted. Three-month Treasury bills are now paying a marginally higher yield than 10-year bonds. Indeed, the inversion stretched across the middle of the range of yields, with 3- and 6-month Treasuries paying higher yields than any tenors between one and 10 years. In a normal debt market, the yield curve should have a steady upward slope; the current shape resembles the Big Dipper.

There is no causal relationship between a curve inversion and a recession, but they have occurred together frequently enough to garner attention. Yet this news should not be taken as a sign that the expansion has reached an end. The inversions that appeared before past recessions were sustained for several weeks. There have been 3-month/10-year inversions that passed after a few days and did not portend a recession. We should watch for movements in the weeks ahead. 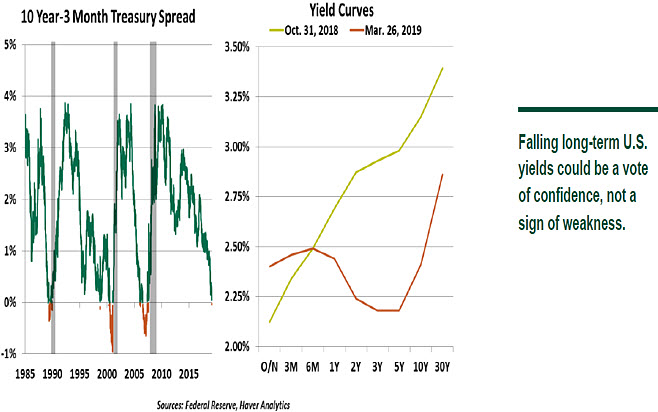 Lasting inversions, though predictive, do not consistently foretell the timing of a recession, with recessions starting anywhere from nine to 18 months after past inversions. Notably, corporate credit spreads have remained steady, suggesting the current distortion in the sovereign debt market is not a widespread problem with credit risk.

Also muddying the interpretation is the fact that U.S. long-term rates have been suppressed by a high degree of international demand. Capital flows around the world freely, and U.S. bonds pay the highest yield among developed economies. And though it may be folly to say it’s different this time, this inversion is the first we have experienced with elevated levels of central bank asset holdings, which may have fundamentally changed the potential yield of government bonds.

We are entering a state of economic transition in which data releases may be confusing and at times contradictory. The current yield curve concerns may prove transient, but there could certainly be twists thrown at us in the months ahead.