Vaibhav reports on what’s ahead for India after recent elections.

The decade of the 1990s in India was an era of rapid change.  The sudden rise of new choices and shifts in consumer preferences was stunning, in hindsight.  Not too long ago, to watch our favorite TV shows, we had to be home on time with the exterior antenna pointed in the right direction.  Weather often played spoilsport even if the events weren’t remotely associated with sports.  Aside from our limited television choices, we occupied our time playing cricket, fighting for space in narrow streets.

Today, antennas have been replaced by satellite dishes and streaming media.  Cricket is a rare sight on streets, increasingly played instead on apps and gaming consoles.  Wireless technology is pervasive, extending beyond mobile phones to home appliances and vehicles.

The transformation experienced in many Indians’ lifestyles over last three decades stemmed directly from the economic liberalization reforms of 1991.  They opened India to global trade and paved the way for our country to become the world’s sixth largest economy. With Prime Minister Narendra Modi securing another large mandate in last month’s elections, the world is watching to see if the Indian economy will be able to take its next leap forward.

In his first term, Modi embarked on important structural reforms.  The government introduced a goods and services tax, modernized the bankruptcy process and established an inflation-targeting framework.  These measures contributed to an improvement in business conditions that boosted India’s ranking as a place to do business.

While much has changed for the better, some long-running problems continue to stall the nation’s progress.  First, India needs more inclusive growth; economic gains have not benefitted the full population.  While high economic growth has enhanced the overall standard of living, India still has more people living in poverty than any other country.  Per-capita income remains low relative to other emerging markets, with the economy marked by a gap in the distribution of income and wealth.  According to Credit Suisse’s Global Wealth Report 2018, the top 1% owns over 55% of India’s wealth; by comparison, the richest 1% in the U.S. own 35% of its wealth.

“India is a young country with ageing infrastructure.”

India’s infrastructure gap, rigid labor laws (about 200 of them, with over a fourth being national rules) and the difficulty of acquiring land are key challenges that drive investors away to countries like China and Vietnam.  India’s overloaded power grid is the most obvious sign of lagging infrastructure development, as power failures are often seen even in the most developed cities.  In addition, the country is suffering from “the worst water crisis in its history,” which is expected to worsen.  And despite boasting the lowest unit labor costs among the major emerging economies, India has failed to deploy its large labor pool in the manufacturing sector.

India’s fixed capital formation as a share of gross domestic product (GDP) has declined from 36% in 2007 to 29% in 2018, an alarming trend for an economy that intends to keep growing.  However, emphasis on infrastructure spending and foreign direct investment, along with the recapitalization of public sector banks, should spur private investment. 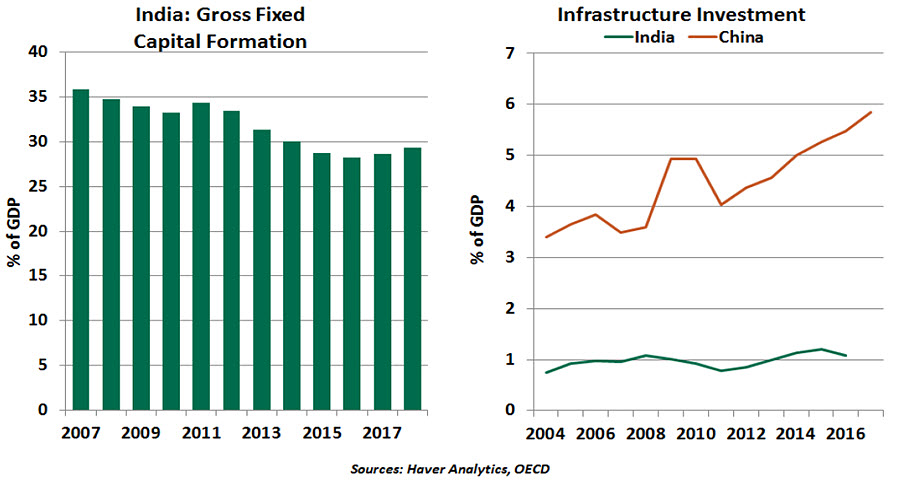 Stress in India’s agriculture sector and a lack of adequate jobs are other immediate concerns.  Over 66% of Indians live in rural areas, and around 90% of their income is generated from agriculture and natural resources.  Quick fixes like farm loan waivers have only added to the burden on state and central government finances.  India, unlike several of its advanced counterparts, has a demographic dividend (a large, young population) on its side.  Though an opportunity, the dividend could turn into a curse if mass unemployment among the youth causes unrest.

Investment in human capital is the key to India’s future prosperity.  India still has one of the highest rates of illiteracy in the world.  While greater labor force participation is necessary for growth, it will stay depressed as long as workers have few skills to offer the market.  Curing this gap will take a great deal of time and investment by all stakeholders, but the payoff would be transformative.  ”Modicare” was a step toward building a safety net and set a precedent for deliberate government investment in its people.

China and India are often compared in the same breath, but they have little in common except geographic proximity.  The Chinese economy is miles ahead, particularly in terms of infrastructure, a key element for unlocking growth potential.  Over the past decade, India invested an average of only 1.0% of its GDP in infrastructure, compared to China’s 4.8%.

“India should have invested in its infrastructure long ago, but it’s not too late to start.”

India’s cautious public spending has an upside: The country grew at a robust pace without amassing a large debt.  Unlike many emerging markets over the past decade, neither the central government nor Indian households have indulged in heavy borrowing.  Non-financial corporate debt had risen but has recently started tapering.

The challenges are numerous but surmountable.  According to some market analysts, India is poised to continue its march into the top three global economies of the world over the next decade.  A country as large and diverse as ours is not easy to govern, but Mr. Modi is doing a credible job.

According to the International Monetary Fund, India’s economy is an “elephant that is starting to run.”  We share the view, recognizing that an elephant isn’t an animal typically associated with speed.  It is a symbol of strength and patience.  Nevertheless, India is poised to unleash its “animal spirits” to become an economic powerhouse.  I can’t wait to see what my country will look like twenty years from now.

The trade conflict between China and the United States has been focused on the imbalance of trade in goods.  This limited view obscures an important financial connection between the two nations: China is the largest foreign holder of U.S. Treasury debt.  As tensions have risen, so have concerns that China may use its portfolio to gain leverage over the United States. Such a maneuver, however, would be short-sighted and would do the most harm to China itself.

China’s accumulation of Treasuries was a natural consequence of the trade dynamic between the two countries.  The thriving but imbalanced trade regime left the U.S. holding Chinese goods and China holding American money.  China needed to reinvest those dollars somewhere, and U.S. sovereign debt was a safe investment.

Now, as tensions rise, China is seeking ways to show its resolve against U.S. efforts to alter the terms of trade.  Its motivation for considering its Treasury portfolio is straightforward. China’s total imports from the United States are far smaller than its exports, so China cannot match the magnitude of the U.S. tariff actions with tariffs alone.  Instead, China could “weaponize” its Treasury portfolio.  If it ceased purchases of new issuance and flooded the market with off-the-run holdings, bond prices would fall and push up yields, thereby increasing the cost of American government borrowing.

We expect the move would backfire.  Firstly, China would devalue its remaining holdings of U.S. Treasuries.  A substantial devaluation would impair China’s fiscal position at a fragile time for its export-dependent economy. China’s reserves are used, in part, to manage the value of the currency; reducing this capacity could bring the renminbi closer to a free float, which the Chinese have assiduously avoided.

If China stubbornly forces a sale, what would it do with the proceeds?  China has invested heavily in U.S. Treasuries because they are safe and offer adequate yields.  Long-term sovereign debt from other developed nations offers low, sometimes negative interest rates.  Emerging market debt, domestic debt and equity investments are all more risky than Treasuries.  And ironically, a major sell-off of dollar assets would depress the value of the U.S. dollar, an outcome the Trump administration would welcome to boost U.S. export competitiveness. 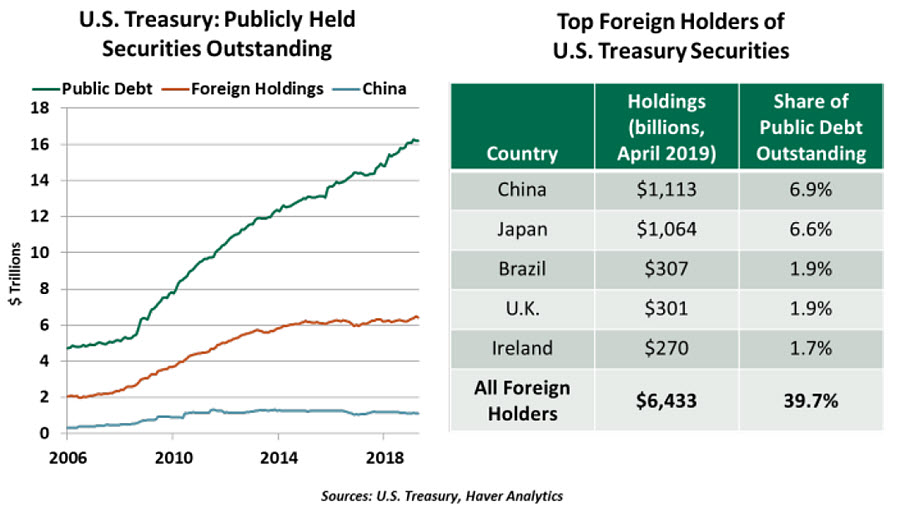 The global market would be displeased by such a rash action, and China would be blamed for any ensuing instability.  China would lose its claim to not be an aggressor in negotiations, impairing its negotiating position.  And the U.S. administration would not be shy about finding a way to retaliate.

For all the short-term disruption a sell-off would cause, any damage would be short-lived.  Demand for Treasuries is widespread, and the market is highly liquid. The increased supply would be absorbed by other buyers. Indeed, the role of foreign holdings is often overstated; foreign ownership of U.S. debt represents about 40% of all publicly held debt, a share that has fallen in recent years. China’s position of $1.1 trillion represents less than 7% of publicly held debt.

The reasons to weaponize China’s portfolio are petty and dangerous; the reasons to continue holding U.S. Treasuries are legion. This balance should be clear to Chinese economic planners.

In the game of musical chairs, players are successively eliminated as the number of chairs is reduced.  Europe is presently experiencing a reverse form of musical chairs as it sorts out the next generation of economic leaders.  Key people are moving from one seat to another, but there may be more chairs than there are worthy candidates.

Christine Lagarde, managing director of the International Monetary Fund (IMF), has agreed to succeed Mario Draghi as President of the European Central Bank (ECB), beginning in November.  She is an enlightened choice; she has immense experience in international finance and in managing an organization with multiple stakeholders.

She is not a trained economist (she began her career as a lawyer), but is familiar with the issues confronting the ECB.  She enjoys widespread respect around Europe.

Her formidable diplomatic skill will be called upon as the ECB seeks to continue (and possibly extend) its monetary stimulus.  The outlook for the eurozone is tenuous, interest rates in the eurozone are already negative, and quantitative easing is nearing the limits allowed by the ECB constitution.  New ideas must be generated and marketed effectively.

But her transition leaves a big hole at the IMF at a delicate time.  After falling off in the years after the financial crisis, IMF lending is picking up again.  The biggest support program in history was recently offered to Argentina, and another one (for Turkey) may be on the horizon.  The capital needed for these operations may not be easy to generate, as spreading nationalism is threatening the IMF’s supply of capital.

A rumor has arisen that Bank of England (BoE) Governor Mark Carney might move to the IMF when his term ends next January.  Carney is a past chairman of the Financial Stability Board, but his tenure at the BoE has not been universally acclaimed.  Whether or not he moves to the IMF, his departure from the BoE will leave another vital policy-making chair open.

This is a critical economic interval for Europe.  Success will require getting the right people into the right seats without delay, before the music stops.