The Fed doesn’t get to take this summer off.

School schedules make summer an ideal time to get away.  During those vacations, families often encourage loved ones to make a clean break from business, to reconnect and recharge.  And so, a worker’s greatest wish is for a quiet summer news cycle.

But in my own experience, that wish is rarely fulfilled.  In 2008, I was in a craft barn with my children when the U.S. Department of the Treasury extended emergency support to Freddie Mac and Fannie Mae.  I was kayaking on a lake in 2011 when U.S. Treasury debt was downgraded.  And I was on a pastoral bike ride three years ago when British voters decided to leave the European Union.

This summer may not offer the same kind of drama as those precedents, but the upcoming Federal Open Market Committee (FOMC) meeting will be anything but a quiet affair.  Fed watchers on holiday next week may have to re-engage temporarily to digest the decision and begin thinking about next steps.

Viewed strictly on the basis of U.S. economic fundamentals, one might wonder why the Fed isn’t taking the summer off.  After a disappointing employment report for May (which showed tepid job creation in that month and downward revisions to the tallies for March and April), the most recent reading showed a healthy rise in payrolls and labor force participation.  Complaints from hiring managers about the difficulty of filling open positions remain at a high pitch.  New claims for unemployment insurance are holding at low levels. 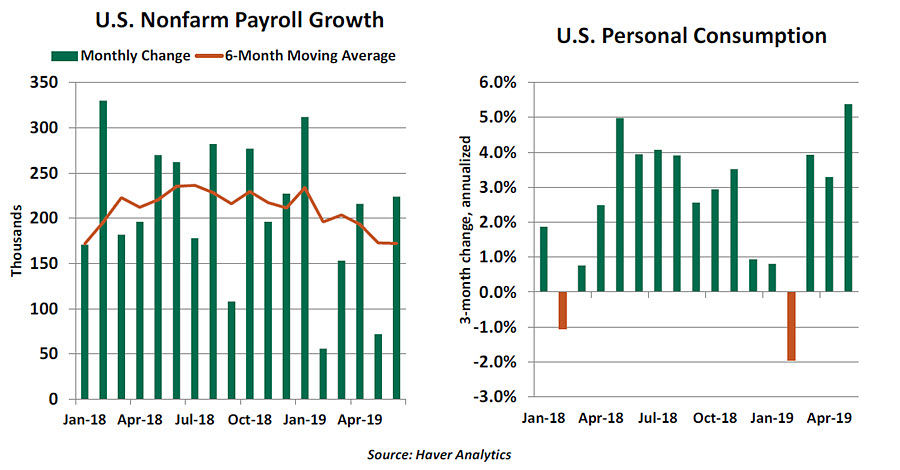 Some have suggested worries about the economic outlook would cause firms to become more cautious about hiring, causing the concern to become self-fulfilling.  There is no sign of this in the data, at least for now.

Inflation is running below the Fed’s target, and has for some time.  But the shortfall is not immense, and survey-based inflation expectations remain well-anchored.  The deflator on core personal consumption expenditures, the Fed’s favored inflation gauge, is showing the lowest yearly increase; alternatives show progress that is much closer to the desired level of 2%.  There is no urgent need to address this situation.

“The Fed is intent on guarding against downside risks.”

The consensus among forecasters (including the Fed’s summary of economic projections) is for more of the same in the second half, but this forecast runs the risk of being overly optimistic.  Economic activity elsewhere in the world is less inspiring, which could present a significant headwind for U.S. markets and U.S. growth.

The countries most reliant on cross-border commerce are struggling.  China’s growth rate has fallen to its lowest level in 25 years.  Singapore, a critical part of Asian supply chains, is in danger of recession.  Australia’s central bank has reduced interest rates twice this year in an effort to preserve that country’s 28-year expansion.  Germany, the engine of the eurozone, has seen real growth fall to 0.7% over the past twelve months.  At its meeting on Thursday, the European Central Bank strongly suggested more monetary stimulus is on the way.

Federal Reserve Chairman Jay Powell has referred to these international influences as “crosscurrents” that could throw the U.S. expansion off course.  The American economy and American markets have become much more correlated with global factors over the last generation.  Respecting this threat, Fed officials have been suggesting for several weeks that an interest rate reduction would be forthcoming.

The mere promise of lower rates has eased financial conditions in the U.S.  In particular, the dollar has depreciated in anticipation of narrower rate differentials with other countries.  This should help American exports regain some competitiveness.

Should the Fed fail to deliver on its promise, financial conditions and financial markets would likely lose gains made over the past several months.  For that reason, it seems unlikely that the Fed will stand pat.

The Fed has also made the case that acting pre-emptively makes the most of its capacity.  Interest rates are much lower than they were prior to past downturns, leaving less room for response if conditions soften.  The hope is that by applying an “insurance cut” now, the Fed can avoid the substantial economic cost that is incurred when rates get close to zero.

“With U.S. economic fundamentals strong, a half-point rate cut would be excessive.”

There has been some speculation that the Fed will reduce overnight rates by 50 basis points next week.  (This was founded, in part, on some awkward communication from key officials.)  Cuts of more than a quarter-point have occurred periodically during the past thirty years, but they all followed sharp turns in economic or financial data.  And they were all initiated when interest rates were much higher than they are today.

Some suggest the Fed needs to make a bold statement, to get out in front of a threatening situation.  But an emergency does not seem to be at hand.  Should the Fed’s worst fears be realized, it has the option of furthering its efforts at subsequent meetings.  And it will have the opportunity to steer expectations at its annual Jackson Hole conference next month.

And as luck would have it, I was planning to be away from the office next week.  I may have to sneak into the cave on the mini golf course to watch the Fed press conference next Wednesday afternoon.  I’ll just tell all of the other groups to play through.

There is a new addition to the already long list of global trade battles. Citing security concerns, Japan recently began restricting exports of chemicals to South Korea, ingredients that are essential to the country’s vast high-tech (semiconductor) industry. Japan is also considering removing South Korea from its “white list” of trustworthy countries that face minimum trade restrictions.  All of this threatens the decades-old economic and security partnership between the two of Asia’s leading economies.

Historically, the recent cooperation between Japan and South Korea might be viewed as the exception. The two countries have never been completely at ease; their relationship includes a long series of occupations and territorial disputes.  Past anxieties were revisited last October, when a South Korean court ordered Japanese firms to pay compensation for the forced labor employed during Japan’s occupation of the Korean peninsula from 1910 to 1945.  The Japanese believe this issue was settled under a 1965 treaty, which had set a beneficial tone for improved ties.

Both countries have prospered from their recent cooperation.  Total trade between them has increased from a mere $0.2 billion in 1965 to $85 billion in 2018.  Imports of Japanese intermediate goods, along with technical cooperation and joint ventures with Japanese firms, have played a vital role in South Korea’s impressive economic performance over the past two decades.  But the student has now become a rival to the teacher.

South Korea's push for structural reforms and economic globalization in the aftermath of the Asian currency crisis of 1997 has helped it create world-class enterprises at home.  This contributed to a somewhat reduced reliance on Japanese technology.  Japan’s share of total South Korean imports declined from 9.3% in 2002 to 4.7% in 2017.  The rise of China as the world’s factory and Japan’s own economic woes (two lost decades) also explain this shift.

In many markets, Japanese and South Korean companies compete with one another. That said, the two are interdependent in specific export markets, including chips and smartphone displays.

South Korea has imported 94% of photoresists, 94% of fluorinated polyimides and 44% of hydrogen fluoride from Japan this year (through May).  All three materials are important for semiconductors, smartphone displays and chip-making processes.  About one-third of Korea’s high-tech imports come from Japan, underlining Japan’s importance to Korea’s tech sector.

Today’s trade tensions are still in their early stages.  The overall impact so far on Korean firms has been muted, as they rely on stockpiles to maintain production.  However, if Japan were to stretch trade restrictions for than a few months and strike South Korea off the “white list,” the South Korean economy, already reeling under the negative effects of the broader global trade tensions, will likely incur heavy losses.

“Japan and South Korea join the long list of countries taking up trade arms against one another.”

According to Oxford Economics, a 10% fall in Korean semiconductor production could reduce Korean GDP growth by 0.5% in 2019-20.  Japanese firms are also not immune to negative shocks; South Korea is their third-largest export destination and the fourth-largest source of their imports. 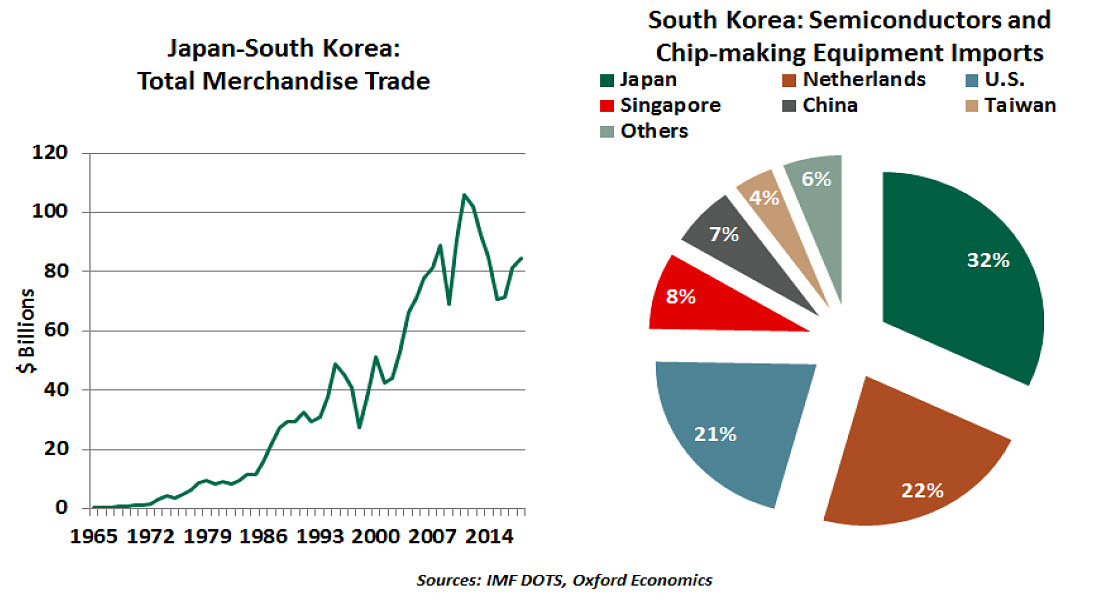 Korean manufacturers will be pushed to find alternative suppliers.  Chinese companies could potentially fill the shortfall, but Chinese high-tech firms are not as advanced as those in Korea and Japan.  Reinvention and re-calibration of complex supply chains is never easy.

The U.S. has so far been slow to intervene, but may need to act as a mediator.  South Korea will also approach the World Trade Organization (WTO) for remedy. Considering the WTO’s work load, the process could take years to reach a logical conclusion.  While we expect tensions to subside over the coming months, it looks like Japan and South Korea have become frenemies again.

This week, members of the U.S. Congress reached an agreement to suspend the debt ceiling and raise spending caps, granting a welcome two-year reprieve from worries about the need to fund the government.  But while the worst outcomes are off the table, this is not the end of fiscal fighting.

The debt ceiling has been a risk in the back of our minds since it went back into force in March.  The U.S. Treasury has been quietly operating under special procedures to prioritize payments, but the situation is likely to reach a pinch point in September.  If the government is unable to pay its obligations, it risks a credit rating downgrade or debt default, which could touch off a financial crisis.

We are not overly distraught at the suspension of the debt ceiling. It is an odd fiscal tool, unique to the United States.  While fiscal oversight is necessary, the appropriate time for those deliberations is the annual budget cycle, not the moment that the Treasury runs out of borrowing room.  Dealing with the situation now removes an important source of uncertainty, and the two-year suspension takes us past the next presidential elections.

Congress also agreed to ease the spending restrictions imposed by prior legislative spending caps.  True fiscal conservatives may be upset at the lack of restraint, but it appears many members of Congress are comfortable with permanently increased levels of government spending.  And it avoids a “fiscal cliff” next year.

“Fiscal compromise was necessary but will not become the norm.”

While the broad contours of the Federal budget have been agreed, the details still need to be filled in. The government must have a budget in place before its fiscal year ends on September 30.  Battles over individual line items are still likely. Congress will not have much time to resolve remaining disputes: the House breaks for its August recess today, and sessions won’t resume until September 9.

We should not mistake this week’s news for a sign of a greater appetite for bipartisan cooperation.  The budget battles to come will be intense, but at least the stakes are lower.