Talks are back on, but success is far from assured.

I know this will sound un-American, especially around Independence Day. But I have enjoyed following the Cricket World Cup. Think baseball, but with only two bases, no foul territory and no seventh-inning stretch. (There are, however, drink breaks.)  The pitcher is allowed a running start, and hits that travel farther are worth additional runs. The cricket lexicon includes a number of colorful terms, including yorkers, beamers, sillies and cow corners.

Americans exposed to cricket often complain about the slow pace of the game. Matches in the one-day format used for the World Cup can take more than eight hours to complete. Yet the periods of relative calm are punctuated by moments of drama; those watching can be held in considerable suspense.

The leaders of the G-20 countries met last week in Japan, and the gathering provided a moment of drama. Presidents Xi and Trump agreed to send delegates back to the bargaining table to seek a resolution of the long-running trade dispute between China and the United States. The negotiations should provide a period of relative calm, which is preferable to the series of shots the two nations have been exchanging.

But there remains considerable suspense over the ultimate outcome of the trade conflict, which might be enough to tip the global economy into a recession.

It has certainly been a whirlwind couple of months on the trade front. As April gave way to May, expectations for an accord between China and the United States were rising. Plans for a midyear summit meeting to celebrate the achievement were being formulated. Major equity markets had regained all of the ground lost in the fourth quarter of 2018, and new records were within reach.

In early May, talks broke down. Washington alleged that Chinese negotiators had retreated on their commitments, and reacted by imposing tariffs on $200 billion of U.S. imports from China and threatening to extend to the full range of products purchased from China. Specific sanctions on Chinese providers were implemented, broadening the conflict. Six weeks of provocation followed.

And then, almost as suddenly as the drama had arisen, it seemed to recede. Twitter was once again employed to share important communication: the prospect of a meeting between the two leaders was previewed in mid-June, and the announcement almost immediately brought cheer from equity investors. Upon completion of the G-20 meeting, stock markets touched new record levels. Order, to some, has been restored.

“New talks may not allay the uncertainty surrounding global commerce.”

But while talks are back on, success is far from assured. Outwardly, the two sides are still far apart, and they have limited room for retreat. If agreement is reached in the coming months, it will most likely be less than comprehensive, and will require strict verification as a prerequisite for tariff reduction. (This latter point was the flash point that ignited a bad reaction from Washington in early May.) Ratification of any agreement in the U.S. Congress will be difficult to secure.

The constant throughout the recent trade news cycle has been uncertainty. Twists and turns in the trade tests have been frequent, with their impact exacerbated by the mode of expression. When businesses can’t see their operating environment clearly, they often turn cautious. They become more reluctant to expand, invest and hire.

In markets around the world, we currently see falling business sentiment and much slower rates of business investment. This combination has been particularly acute in Europe, whose economy is struggling as we begin the second half of the year. 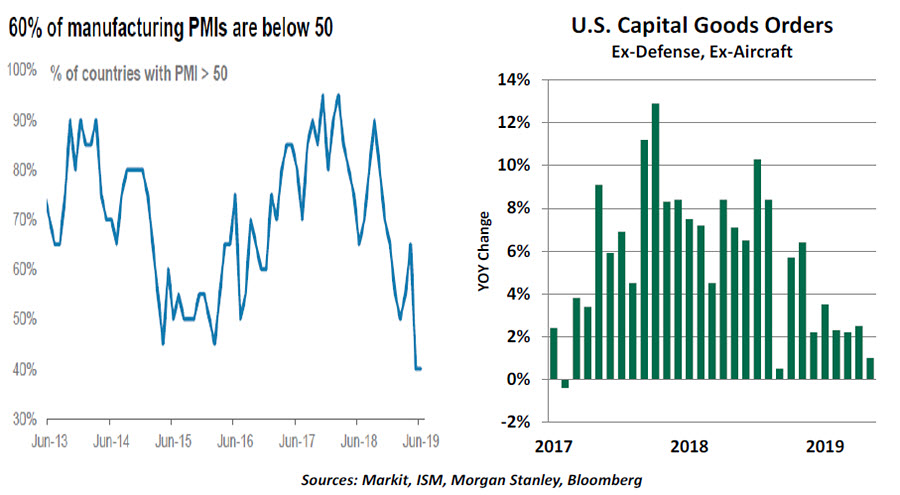 Uncertainty isn’t just a byproduct of the discussions between the U.S. and China. Washington has aimed tariffs at a number of different countries. The future of commerce between the United Kingdom and the rest of the European Union is potentially less clear today than it was after the Brexit referendum three years ago. Spats among other nations are crowding the caseload of the World Trade Organization.

Even when tensions abate, concern remains. Threats that recede have shown the capacity to re-emerge; auto tariffs against European manufacturers are a case in point. To prepare for the worst, firms have to pursue contingencies, which often involving the expensive and time-consuming process of locating alternative suppliers or altering deeply established supply chains. Business expansion has been pushed to the back burner.

“Trade frictions have planted seeds of doubt that will be difficult to unearth.”

The global trade contraction has planted seeds of doubt that will be difficult to unearth. Agreements, if and when they come, may reduce the number of variables firms face. But in a world in which populism is in the ascendance, the end of one trade battle may simply be the prelude to another.

I have always been impressed that cricket fielders (with one exception) are not allowed to wear gloves, requiring them to catch a very hard ball with their bare hands. This leaves players vulnerable to bruising, which can cause them to hesitate before going after the next opportunity.

Overcoming this reluctance is critical to success on the cricket oval—and in the trade arena. Let’s hope actions to restrict global trade are caught out more often in the months ahead.

Those who fall in love with lush tropical locales are said to have “gone bamboo.”  Some global businesses are falling prey to this affliction as a result of the trade battle between China and the United States.

While several trade-dependent economies have experienced collateral damage from the conflict, Vietnam has generally been the exception. With its heavy reliance on trade—exports account for 102% of its gross domestic product (GDP)—the Vietnamese economy should have suffered due to rising protectionist sentiment.   However, it has emerged as an improbable beneficiary.

Despite external uncertainties, Vietnam has experienced a surge of inbound direct investment over the past several years. Chinese investment into Vietnam has doubled from around $1.2 billion in 2016 to $2.5 billion in 2018, making it the fourth-largest foreign investor. Newly registered investments in the country during the first five months of 2019 were up by 69% compared to the same period of 2018.

The facilities funded by these investments have positioned Vietnam as a major assembly point in the Asian electronics supply chain. Vietnam has become a leading producer of mobile phones, semiconductors and flat screens. A number of South Korean, Japanese and Taiwanese firms have increased their presence in Vietnam for manufacturing or engineering purposes.

As a result of all of this, Vietnam has become one of the fastest-growing sources of American imports from Asia. Imports from Vietnam to the U.S. increased 40% on a year-over-year basis in the first quarter of 2019.

With businesses operating in China facing tariffs on exports to the U.S., more manufacturers, including multinationals, have started moving production to Vietnam.  Its business-friendly policies and geographical proximity to China have made the choice to move easier.  Strategically, although Vietnam and the U.S. share concerns about China’s regional ambitions, American investments into Vietnam have been quite low. The U.S. was Vietnam’s 11th largest foreign investor, with only $550 million invested in 2018.

Tariffs may have accelerated the trend of supply chain realignment, but they are not the sole reason behind this shift. Rising Chinese labor costs, a need for diversification and the transition from labor-intensive sectors to high-tech industries are also important factors. Yet Vietnam lacks China’s size and scale, and recent business inflows have pushed Vietnam’s infrastructure, labor market and suppliers to their limits.

While Vietnam’s economy has benefitted from the trade diversion, the foundation that made these gains possible was laid in 1986 by an economic renewal policy that favored a market-oriented system. The approach embraced trade liberalization, deregulation and reducing the cost of doing business. The state also invested heavily in building human and physical capital. The current government has also focused on attracting foreign investment by reducing enterprise taxes and removing investment restrictions.

“Reforms initiated over three decades ago have helped Vietnam reap the benefits of trade diversion.” 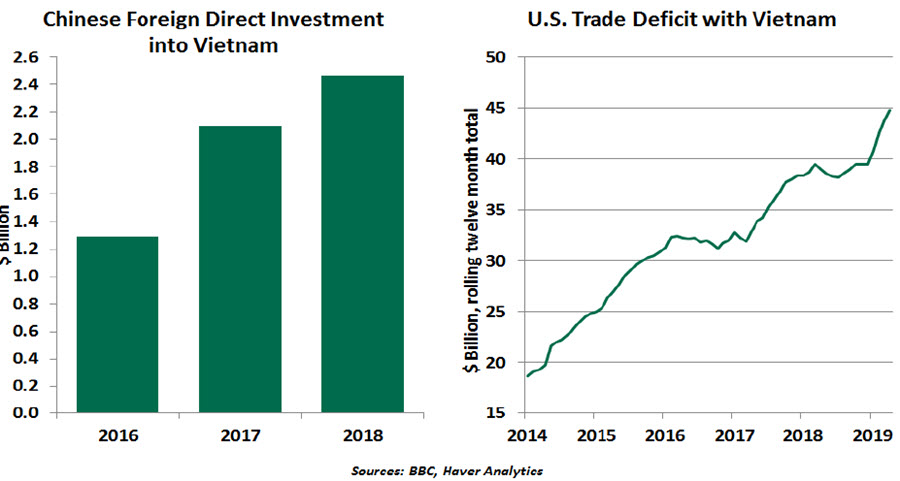 As a result, Vietnam has achieved uninterrupted growth over the past three decades, cultivating a niche in both high value-added sectors like semiconductors, and labor-intensive goods like textiles. It has also been among the fastest growing economies in the world, with average real GDP growth of 6.9% since 1991 rivaling major emerging markets such as China and India.

With a GDP of $241 billion, Vietnam’s economy is smaller than some of its regional counterparts, including Indonesia, Thailand and the Philippines. While Vietnam carries the largest fiscal deficit and government debt among its peers, the share of debt denominated in foreign currency is declining). It is viewed as a star among emerging markets.

Nonetheless, Vietnam is becoming a victim of its own success. Its trade surplus with the U.S. has increased by over $25 billion since 2014 to $45 billion in 2018. The Trump administration often conflates the presence of a trade deficit and unfair trade practices, and the American president consequently referred to Vietnam as “the single worst abuser of everybody” in a recent tweet. The beneficiary of the trade war is now the target. As this commentary was going to press, the U.S. Commerce Department imposed duties of up to 456% on steel from Vietnam.

Increasing instances of Chinese goods being fraudulently relabeled as “Made in Vietnam” will attract further scrutiny. “Transshipment” is also a concern. A recent surge in computers and electronics imports from China suggests companies might be dodging tariffs by diverting goods to Vietnam before re-exporting them to the U.S.  Although Vietnamese authorities have sought to crack down on these practices, mere commitment won’t be sufficient for the U.S. administration to change its tone.

The situation is also colored by the Vietnam government’s participation in the country’s economy and its practice of managing its currency to sustain the attraction of its exports. These are two elements that western nations have found objectionable in China.

“Vietnam risks becoming a victim of its own success.”

The exchange rate for the Vietnamese dong has elements of both a crawling peg and a managed float. Intervention has generally been aimed allowing the currency to depreciate. With a new focus on Vietnam’s trade position, the U.S. Treasury Department added the dong to its currency practices watch list, a warning signal to Vietnamese leadership but not yet a designation of currency manipulation. 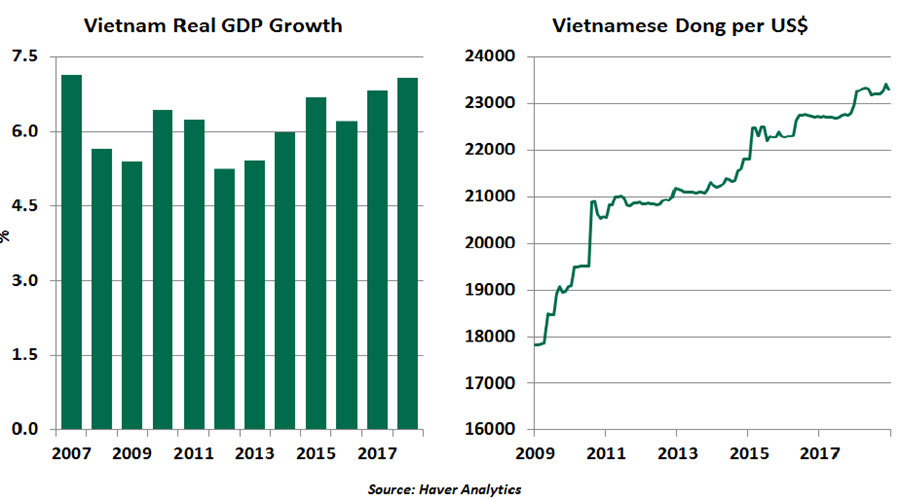 Unfortunately, the country’s ability to enchant foreign businesses may diminish. The United States has brandished the tariff stick against Vietnam; in this case, made of bamboo.