The year 2019 has been rich with economic news. We have observed six key themes.

What we don’t know about investments could fill an encyclopedia, but the current positions of the stock and bond markets are difficult to reconcile.

Last week, the S&P 500 closed at a record high level. After a sell-off in May, investors in equities and corporate debt regained their confidence, thanks to hints of cooling tensions between the U.S. and China and the prospect of interest rate cuts by the Federal Reserve.

Government bond markets, however, did not find cheer. Interest rates across maturities were little changed, and the inversion of 3-month and 10-year U.S. Treasury yields has persisted. Nervous investors may prefer the stability of bonds to the risks of equities, at any price, and $12 trillion of sovereign securities now pay negative interest rates. 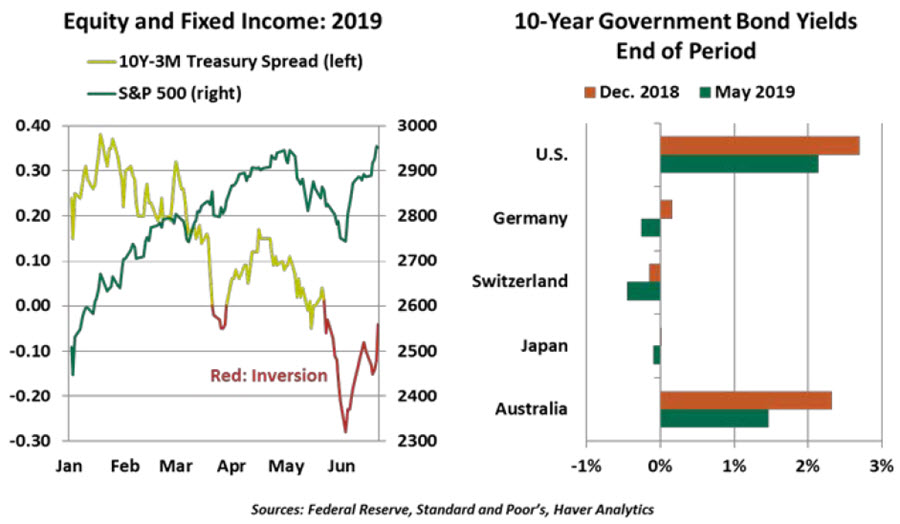 Some will point to dovish signals from central banks as supportive of stocks. But monetary easing in the United States is not expected to be substantial, and will take time to reach full effect. In markets like the eurozone and Japan, rates are already negative and unlikely to decline further.

It is difficult to think that corporate earnings will remain untouched by trade conflicts. Tariffs are often absorbed in profit margins, and supply chains are expensive to alter. Companies and industries targeted by trade retaliation will face unique challenges. Roughly 45% of sales for S&P 500 companies come from outside the United States; growth in several regions is showing clear signs of strain from ongoing trade frictions.

Some say fixed income markets are giving heavier weight to risk cases, which may be true. But it is unclear why equity markets would not show the same respect for possible downsides.

It is unusual to see stock and bond prices so strong simultaneously. It will be interesting to see whether the seemingly conflicting signals coming from the two markets will be reconciled in the second half of the year.

What happened to inflation? We will soon set a record for the longest expansion in U.S. history, but prices have not responded in the manner we had anticipated.

As we have discussed, many factors are holding back inflation. E-commerce has enhanced the ability of consumers to compare prices and find the best deals, while measurement techniques are changing to keep pace with this shift. Older populations spend less and are more cost-conscious, while corporations have made great progress toward controlling their costs.

Stubbornly low inflation has been most surprising in the context of perhaps the best news of the current growth cycle: the relentless fall in unemployment rates. Broad measures of the labor market are improving across countries, and opportunities to work are expanding. While low unemployment is cause for cheer, its pairing with low inflation is also causing confusion. 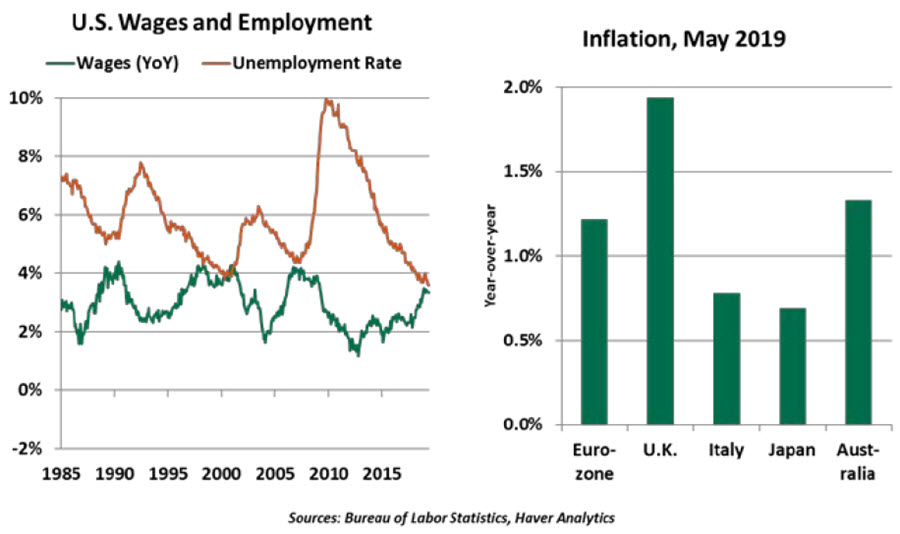 “Despite continued global expansion, inflation has been receding.”

Historically, the Phillips curve defined a trend between employment and inflation. When there is slack in the labor market, inflation is typically moderate. When joblessness falls, employers have to pay more to attract and retain workers. Yet in this cycle, the Phillips curve has gone flat. Wage gains in the U.S. have actually retreated a bit this year, despite an unemployment rate below 4%.

Low inflation is a mixed blessing. Consumers and purchasing managers benefit from stable prices, while businesses do not face compressed margins from higher wage costs. However, persistently low inflation presents a challenge to monetary policymakers, and can create self-fulfilling expectations of disinflation or deflation. We think inflation will drift upward from here, and the Federal Reserve’s most recent forecasts concur. But we thought the same at the start of the year.

Just a year ago, the world’s central banks had confidence in the sustainability of the global expansion, and were mapping a course to bring interest rates back to more normal levels. Contemplating the final year of his tenure, European Central Bank (ECB) President Mario Draghi began mapping out a course to bring eurozone interest rates back into positive territory as a capstone on a notable central banking career.

How times have changed.  The Federal Reserve is expected to cut interest rates at least two more times this year. Last week, Draghi indicated that the ECB is open to trimming rates and resuming its bond purchase program amid darkening regional economic prospects. The Bank of Japan (BoJ) has also signaled its willingness to increase stimulus, and the Reserve Bank of Australia is expected to cut its cash rate further.

The catalyst for the reversal is trade policy, and it is threatening the global expansion. Central banks don’t have control over tariffs, but they are mandated to react accordingly. In the second half of the year, we expect them to swallow hard and provide insurance against recession.

The ultimate question is: Do central banks have enough ammunition to fight the next battle? According to Former Chair of the Federal Reserve Janet Yellen, “I’m sorry to have to say I think the answer is no. They do not have enough bullets and this is really a concern.”  Central banks will have to hope that pre-emptive easing and dovish talk will reduce the possibility of a downturn.

Trade headlines (and tweets) have kept us on our toes thus far this year. The U.S. has taken a hard line with China, sent a chill through the European Union (EU) and Japan, and started a scare with Mexico. The U.S. administration’s ability to instigate so many simultaneous conflicts is a reflection of the power held by the executive branch. This leaves us wondering: What ever happened to checks and balances?

Article I, Section 8 of the Constitution of the United States makes the power of the legislature clear: “The Congress shall have Power To lay and collect Taxes, Duties, Imposts and Excises…[and] To regulate Commerce with foreign Nations….”  However, since 1974, Congress has ceded much of this power through Trade Promotion Authority (TPA).

“Many underestimated the influence that the White House could have over trade policy.”

TPA grants “fast track” trade negotiation authority to the executive branch, promising that Congress will only vote to approve or deny any negotiated agreements, not amend them. TPA empowers trade delegates to confidently represent their country. There is an element of efficiency in this approach, as it avoids the need to legislate each aspect of complicated arrangements.

TPA is temporary. Current law will keep it in force through July 2021, but Congress could act to rescind it sooner. With tariffs starting to take their toll on business sentiment, we are surprised to see so little interest by Congress to reassert its constitutional power.

Beyond the U.S., the World Trade Organization (WTO) has been a paper tiger. The United States justified its tariffs on steel and aluminum with a questionable claim of national security protection. In retaliation, many countries enacted tariffs that may also run afoul of WTO rules. The WTO is meant to arbitrate these issues, but the organization has never dealt with so many grievances of large scale. An adverse finding could trigger the U.S. to withdraw from the WTO, a potentially fatal blow to the organization. In the end, the WTO may only be useful for mediating smaller disputes and maintaining multilateral partnerships; large problems may be beyond its capacity.

The trade tussles between the world’s two largest economies have clearly jeopardized global economic fortunes this year. Though stress between the U.S. and China is bilateral, the ramifications have been multilateral. Weakening global growth amid elevated uncertainty around trade policies is forcing multinationals to reassess their complex supply chains.

Chinese exporters are centered under the trade war’s shadow, but the situation has also thrown shade at several South Asian economies, particularly Singapore and Malaysia. These two nations have high export orientations, dependence on global supply chains, and strong trade integration with China and the U.S. Both have a large share of intermediate exports to China that are used in the production of Chinese exports. Vietnam, which specializes in telecommunications, has been the only exception, as trade diversion appears to have boosted its exports to the U.S.

The Australian economy is caught in the crossfire, too. China is Australia’s largest trading partner, and the U.S. is its largest direct investor. Mediating between the two is like walking a thin tightrope. 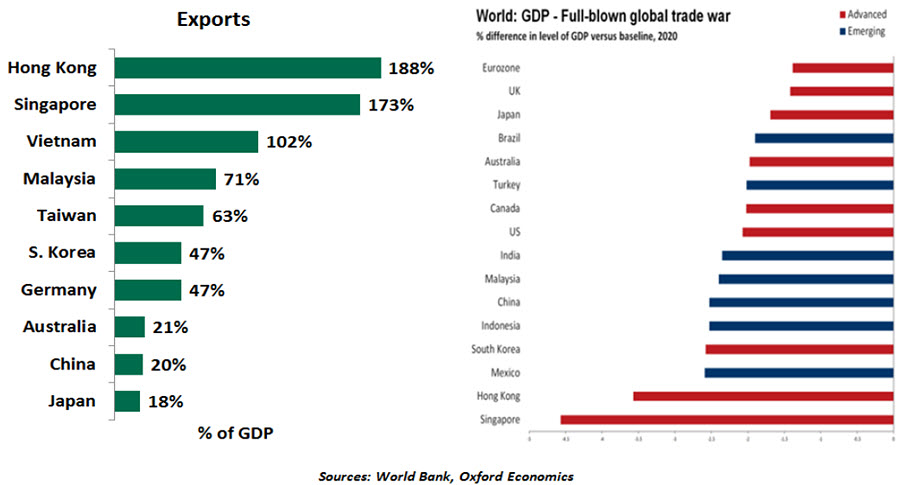 “U.S.-China tensions are hurting a long list of trade-dependent economies.”

Europe isn’t insulated, either. Research by the International Monetary Fund found about 70% of total European exports are linked to forward and backward supply chains. According to the EU’s Chamber of Commerce in China survey, around one-third of EU companies have been hit hard by the ongoing trade tensions.

According to Oxford Economics, a full-blown trade war could cover nearly $800 billion worth of trade, leading to serious consequences for those directly or indirectly involved (see above chart). If peace doesn’t break out soon, the second half of 2019 could be very challenging, the world over.

Nationalism, which puts domestic interests before global engagement, is altering the balance of politics on almost every continent today. That makes it more difficult to achieve consensus and cooperation across countries.  This condition is afflicting the EU most acutely.

The European parliamentary elections are a month in the past, but the difficult discussions over who will lead the key European establishments is illustrative of the political dissonance at the core of the monetary union. France and Germany, the unifying forces behind European policy, are in disagreement over a number of issues. They differed on the length of the Brexit extension and are now wrestling over the next generation of European leaders (including the president of the ECB).

With the European Parliament (EP) now more fragmented than ever, decision-making is only going to get tougher. As Irish Prime Minister Leo Varadkar quipped on his way out of last week’s EU summit, it’s “quicker to elect a pope” than pick a new set of leaders. 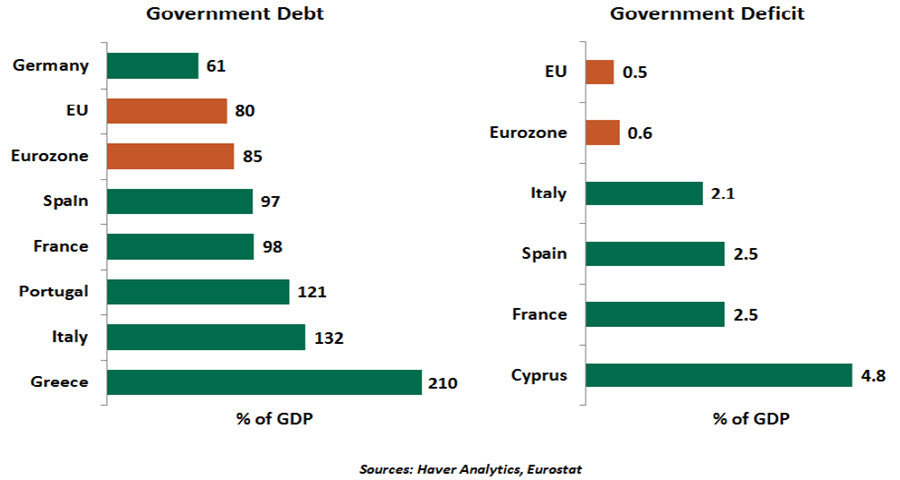 “A lack of leadership is hindering Europe's economic prospects.”

More pressingly, the EU is currently confronted with difficult decisions on fiscal policy. With economic growth faltering, a no-deal Brexit threatening, and a central bank with little to offer, it would seem a good time for countercyclical spending. But as shown above, all countries in the eurozone are in excess of the recommended 60% ceiling on the ratio of debt-to-GDP.

Relaxing these guidelines, some fear, would open a Pandora’s box to all kinds of government spending, some more productive than others. It might be difficult for the European Commission to police the process, especially given deep disagreements among countries on the appropriate level of fiscal freedom to vest in national legislatures.

With a louder voice in the EP, European populist and nationalist parties will continue to push for policies that return power to member states, control immigration and ease European fiscal rules. Together, these changes would weaken the very foundations of the European project. It’s going to be a busy second half in Brussels.