Many factors are holding down inflation, U.S. jobs growth continues to surprise and China’s bad loans are getting worse.

According to Oscar Wilde, cynics are people who know the price of everything and the value of nothing.  On a related note, I am beginning to suspect economists are people who know nothing about prices.  Trends in the price level have confounded analysts and central bankers for a few years now, making it difficult to set economic policy.

Only a generation ago, inflation in developed countries raged at rates that would be unacceptable in emerging markets today.  Today’s inflation rates have been deemed unacceptably low, and have proved relatively unresponsive to tight labor markets and easy monetary conditions.  What’s going on?  The answer has several layers.

In sum, a long list of secular forces seems to be leaning against the normal cyclical pressures that have accumulated after ten years of economic expansion.  Forecasting inflation requires an assessment of how pervasive and powerful these secular forces will be in the years ahead.

We are cynical about claims that the laws of supply and demand have been repealed and inflation will never reappear no matter how well the economy does.  But monetary policy centering on the achievement of an inflation target will have to carefully gauge how the secular and the cyclical will balance in the years ahead.  Any miscalibration in either direction could carry a high price for the global economy.

“Ten years ago, we had Steve Jobs, Johnny Cash and Bob Hope,” went an oft-copied joke at the start of the decade. “Now, we have no jobs, no cash and no hope.”  This corny punchline has since fallen out of favor, and not just because younger audiences are less aware of deceased celebrities.  The job market has improved substantially.

Last week’s payroll report beat estimates, posting a gain of 263,000 jobs and continuing a long-running trend of upside surprises.  We tend to reserve commentary on high-frequency data like the monthly employment report.  Any one month’s results can be an aberration.  However, U.S. job creation has been remarkable for its enduring outperformance.  The U.S. has not had net job losses in a month since September 2010.  Since then, the country has created an average of more than 200,000 jobs every month.

This is remarkable as the current expansion cycle approaches its tenth birthday and is positioned to become the longest one in history.  Hiring has never remained so strong for so long.  And yet, the prime-age labor force participation rate remains shy of its pre-crisis level.

The cycle has taught a lesson in labor force slack.  Speculation about full employment began as the unemployment rate fell below 5% in 2016, but it continued to fall from there.  But “full employment,” properly called the non-accelerating inflation rate of unemployment (NAIRU), cannot be measured precisely.  NAIRU is the inflection point at which employers must make outsized wage increases to attract and retain a diminished supply of workers.  Wage growth has been steady, but subdued, indicating that employers are not competing intensely for talent, and NAIRU has not yet been crossed.

According to the most recent employment report, hourly wages grew only 3.2% (down from 3.4% two months before).  Rather than competing for existing labor, employers have brought their new hires back into the workforce. 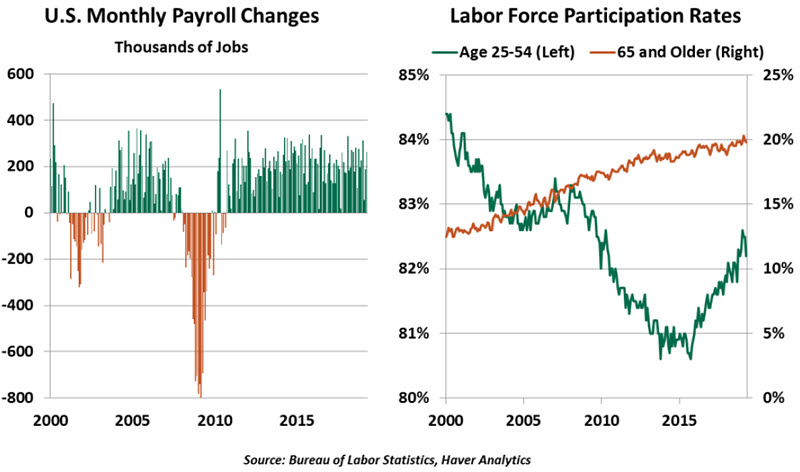 Workers are staying in the labor force longer, helping to continue the expansion.  Some of this is by choice: Those of us employed in the growing knowledge economy can remain productive as long as we maintain our mental faculties.  Some are working for less encouraging reasons, as retirement savings fall and potential retirees find they must continue earning in order to preserve the lifestyles they seek.  As life expectancy continues to increase, we can expect the long-running trend toward older labor force participation to continue growing.

Meanwhile, disability enrollment is falling, with over 450,000 (5%) fewer Social Security disability insurance recipients today than there were at the 2014 peak.  Disability is not a great way to survive, as workers must demonstrate an impairment preventing work, and earn only a subsistence payout.  However, for workers who had reached the limit of their unemployment benefits, earning disability is better than earning nothing.  The fall in disability claims is encouraging.  We do not believe there was widespread fraud among recipients, but rather that workers with manageable symptoms are finding work that they can perform despite mild impairments.

“An employee returning to the workforce is good news for worker and employer alike.”

The supply of jobs continues to grow across all sectors.  The fastest-growing job sectors spanned from construction to business services, offering opportunities for workers of all levels of skill and experience.  For the 13th month in a row, the number of advertised job openings exceeded the estimated number of available workers.  Though there may be some misalignment of geography and qualifications, most in the U.S. who want a job today will be able to find one.

The continued expansion of the labor market is great news for the whole economy: Workers enjoy more options and rising wages.  Businesses are expanding and developing human capital.  The government collects more income tax, reducing fiscal imbalances.  Only the comedians must work harder to find another groaner that laments the economy.

Tighter credit standards and a greater willingness to recognize bad debt have contributed to rising non-performing loans (NPLs) in Chinese banks.  NPLs have increased to CNY 2 trillion ($296 billion), their highest level since early 2004.  China’s NPL ratio stood at 1.8% of total loans outstanding in December 2018, compared to around 1.0% in 2011 and 2012.

Though on the rise, the current NPL ratio is reasonable by international standards (with the U.S. at 1.6% and European Union at 3.2%) and is well below the levels seen in late 1990s.  However, the figure may be enormously understated.  Separate from NPLs, “special mention loans” (loans currently performing but could potentially default) amounting to $503 billion may be next to reach non-performing status.  Asset management companies, created in 1999 to remove NPLs from banks’ balance sheets, have distressed debt of around $620 billion as of June 2018.  In total, there appears to be $1.4 trillion of bad loans in China, amounting to 10.4% of its gross domestic product.

“China’s share of bad loans will only grow as its economy slows and regulations change.”

Several large Chinese banks have reined in NPLs and are increasing loss provisions drastically. By contrast, city commercial banks and rural financial institutions have continued to struggle.  According to the National Audit Office’s report, bad debt levels in Henan province in central China are particularly high.  NPL ratios for 12 banks are above 20% and in some cases even above 40%.  Corporate bond default cases have also surged from 35 in 2017 to 119 in 2018. 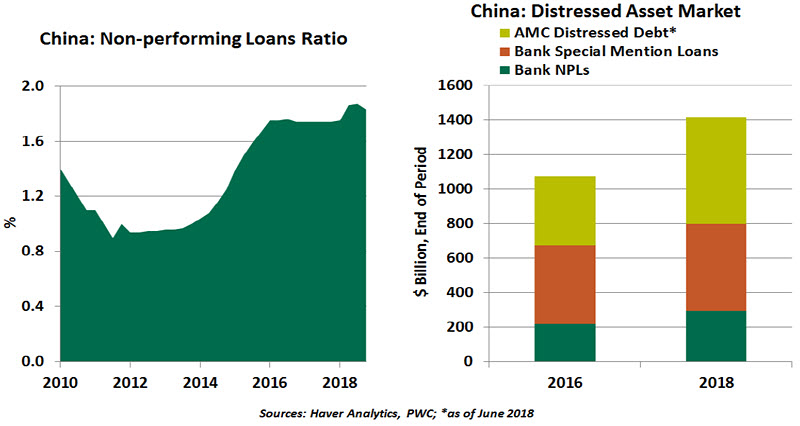 Despite rising defaults, foreign investors are acquiring China’s distressed debt as weak local demand pushes down the prices of NPLs.  This could prove to be a value trap as the loans’ recovery is dependent on the property market, which is the collateral of most of the bad debt.

For now, the situation is manageable.  The government has enough ammo and will likely come to the banks’ rescue if necessary.  But further economic stress from U.S. trade restrictions could increase the pressure.  Beijing needs a clear plan to address China’s bad loan problem before it gets out of hand.