The European Union (EU) is a political and economic union borne after World War II of a desire for harmony in a scarred and divided European continent.  The original concept was founded on the hope that it would “make war unthinkable and materially impossible.”  The original deal was signed in 1950, and called for six nations (Belgium, France, Italy, Luxembourg, the Netherlands and West Germany) to pool their coal and steel resources.  Seven years later, those nations signed the Treaty of Rome, creating the European Economic Community.  This laid the foundations of today's European Union.

The bloc has grown steadily from its six founding members to 28 nations today, but so have its political complications.  This week’s European Parliament (EP) election results reflect more differences than common causes.

The EU's political landscape is undergoing a shift.  Europe's longtime political center, comprising traditional center-left and center-right blocs, has lost its majority in the EP.  Parties on both edges of the political spectrum have expanded their influence.  The results suggest that the EP will be a fickle place in the years to come. 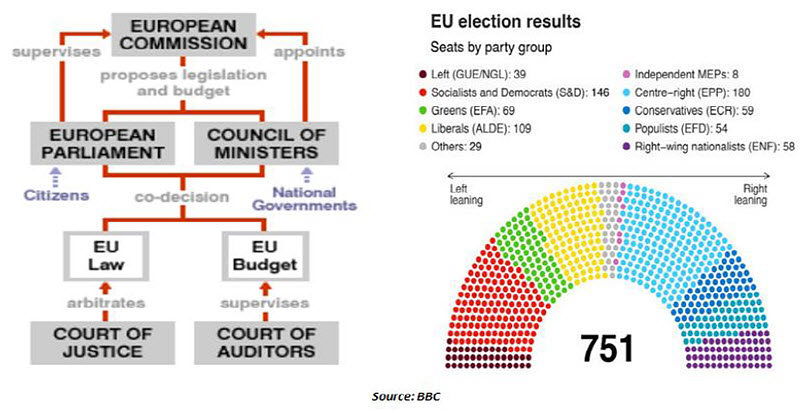 Today’s political commotion is nothing compared to the upheaval of the late 1980s and early 1990s, the era of the end of communism in Europe and the reunification of Germany.  However, the decisions taken by the new EP will have important implications for Europe’s economic future.

Representatives to the EP are directly elected by citizens every five years.  The body has grown in size in the last two decades, as many ex-communist states in central and eastern Europe have joined the EU.  The EP currently has 751 members, called MEPs.   Germany has the most (96) delegates, followed by France with 74, and the U.K. and Italy with 73 each.

The Treaty of Lisbon, signed in 2007, was instrumental in expanding the EP’s powers.  Today, the EP has three main roles: legislative, supervisory and budgetary.  One of the parliament's main legislative roles is scrutinizing and passing laws proposed by the European Commission (EC), the bureaucratic division of the EU.  MEPs have "co-decision" powers in nearly all policy areas: they shape EU laws jointly with the Council of the EU.

The EP is responsible for electing the president of the EC and approving the European budget.  It has strong influence over the banking sector, establishing unified banking supervision (the Single Supervisory Mechanism) and as well as strengthening the European Banking Authority (through regulations such as the bank recovery and resolution directive).  Leaders of the European Central Bank (ECB) are subject to EP approval.

With a louder voice, populists and nationalists in the EP will want to put their stamp on economic policy.  In particular, they will seek to control immigration and ease European fiscal rules.  Both issues have been at the core of the growing resentment against the EU as an institution.  Deep political divisions between European countries and parties may also complicate the appointment of the next EC and ECB presidents.

The prospect of a fiscal policy expansion will create immediate stress for the EP.  Since many EU members share a common currency, the EP has set limits on deficits and debt.  Relaxing these rules will raise concerns, particularly for countries with high debt levels and poor fiscal discipline.

Italy's fiscal position is already gaining attention amid its weak fundamentals and possible EC disciplinary action over its rising debt.  Against the backdrop of the region’s weakening economic prospects, uncertainty around future EU policies could lead to significant market volatility and credit rating downgrades for some European nations. 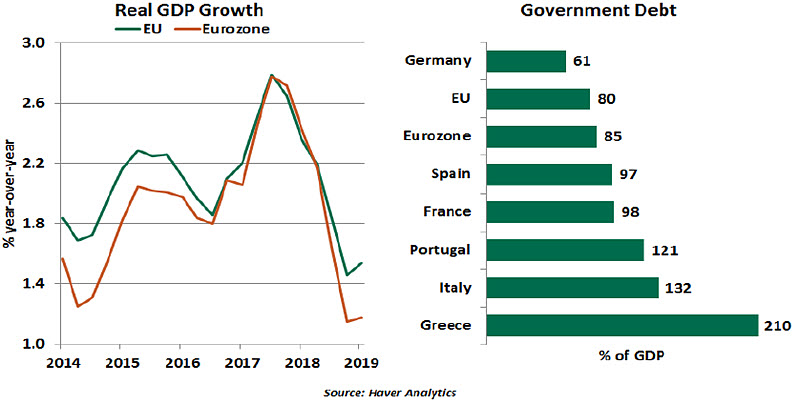 The EP also has a say in treaties ranging from trade talks to Brexit.  Patience for Brexit has run dry in many EU nations, as reflected in April discussions that resulted in a deferral of the U.K.’s departure.  However, on a faintly positive note, the Brexit mess has prompted introspection among eurosceptic parties, now seeking to "change the EU from the inside" rather than leave the union.

From the U.K.’s perspective, the success of Nigel Farage’s Brexit Party in the EP election will push Tory leaders toward supporting a “no deal” Brexit.  Boris Johnson, the leading Tory candidate for prime minister, recently stated that “we will leave the EU on 31 October, deal or no deal.”  The odds of a hard or “no deal” Brexit are clearly on the rise again.

“Odds of a ‘no-deal’ Brexit have risen.”

The race for senior leadership positions in Europe is also heating up.  French President Emmanuel Macron and German Chancellor Angela Merkel are in disagreement over who should lead the EU.  The election of the next EC president will be particularly important and could tilt the odds toward or away from a country’s other candidates.  For instance, the election of an EC president from Germany would effectively eliminate German Jens Weidmann’s candidacy to be ECB president.

European policymaking is set to become more challenging, with consequences for future trade policy, immigration and further EU reforms.  The traditional political blocs will be pressured into uncomfortable compromises or alliances in order to pass important legislation.

We do not think the EU is facing an existential threat in the wake of last weekend’s elections.  The populists did not gain as much as some had expected, and the middle still seems to be holding.  But pressure from the wings will make consensus hard to reach at a time when the European economy needs firm direction.

A historical study of tariffs reveals a host of discouraging outcomes: Lower economic output, slower productivity, higher unemployment and little change to trade balances.  With these risks well-identified, why would any U.S. business welcome tariffs?  And yet, objections to the tariffs from the American business community have, thus far, been muted.  We see a few reasons for this quiet posture, but it may not last.

For starters, protectionism creates both winners and losers.  Those who benefit from protection from international trade will make their satisfaction known.  U.S. metal producers gained from the steel and aluminum tariffs, granting them protection to raise prices and improve their margins.  Domestic manufacturers of products that lost substantial market share to China, from handbags to shoes, may similarly gain.  Meanwhile, the businesses that are worse-off from the new tariffs are dispersed across industries and geographies, making it difficult for them to speak out in unison.

Some business managers have tried to manage their supply chains to mitigate the risk of tariffs.  In the second quarter of 2018, economic growth was boosted by a surge in spending to get ahead of the tariffs that loomed large on the horizon.  In the first quarter of this year, inventory accumulation was a source of outsized growth, likely due to a push to stay ahead of expected increases in tariffs.  This has deferred public expressions of discontent.

Fewer voices exist to raise objections, as well.  Production of goods in the U.S. has been in decline for decades.  Companies remaining in manufacturing have been shaped by this downturn and may be cheering the tough stance on China as a matter of principle.  While defenses of the tariffs vary, some realists have made the case that any costs incurred fighting China are worth the long-term advantage reclaimed from diminishing China’s power in world trade.

Tariffs are a new cost to be absorbed, but the strong U.S. dollar is currently giving importers a purchasing power advantage.  In addition, throughout 2018, American businesses were adjusting to the windfall of the newly enacted Tax Cuts and Jobs Act.  Any minor cost increases from tariffs were a wash in the bottom line as corporate tax rates fell.

For those who could be most severely affected, there has been recourse.  Manufacturers who are reliant on Chinese sources, for which no other supplier is available, may seek relief by appealing to the Commerce Department.  Hundreds of such exemptions have been granted.  The targets of retaliation, specifically farmers, will again receive direct subsidies from the government to replace lost sales and purchase unsold crops this year.  Such subsidies cannot carry on forever, but they have helped placate an influential bloc of voters. 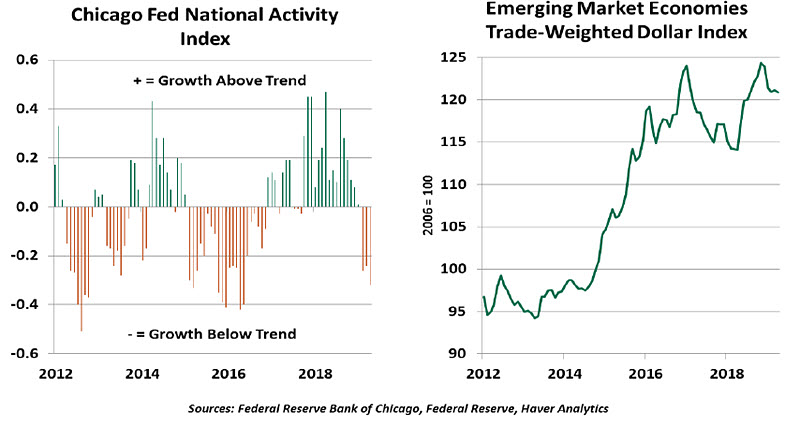 “Any drag from tariffs has been balanced by positive forces.”

The phased nature of the tariffs’ implementation has also blunted some of the more dramatic consequences that would raise the voices of detractors.  Two weeks ago, the U.S. nearly implemented tariffs of up to 25% on imported vehicles and auto parts.  While the ensuing uproar from foreign brands’ dealers and enthusiasts would have been potent, it has thus far been unnecessary.  We believe the deferral was a good idea for many reasons, not least because most foreign automakers have long invested in domestic production of vehicles within the U.S.

Thus far, continued growth despite escalating trade tensions has demonstrated the resilience of the U.S. economy.  Any new burdens have been tolerable and often negated by other economic drivers.  However, this list of reasons for the muted reaction to tariffs is a set of transient circumstances.  Eventually, the business community will scream.  Will our leaders listen?

We’ve been having a debate within the office on what impact the escalating breadth and depth of tariffs between China and the United States will have on inflation.  The answer, as it always is in economics, is complicated.

What is clear is that the prices of goods affected by tariffs have gone up, at least for now.  Exporters can offer some discounts to offset tariffs, but they come at the cost of profitability, reducing margins that were already thin.  The larger the tariff, and the longer it remains in place, the more likely that the underlying good will become more expensive.  The first chart below shows this clearly.

The Federal Reserve has estimated that the latest round of tariffs will cost the average American family more than $800 annually.  (This will vary significantly from household to household, based on what each consumes.)  Higher prices, however, invite consumers to evaluate their options.  They may switch to domestic alternatives, or cut back on their purchases of the specific product.  These second-order effects tend to push down the price level. 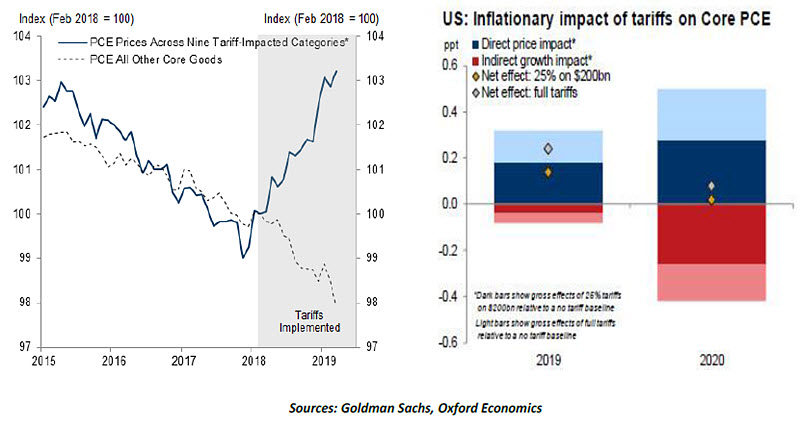 “Inflation from tariffs may be undone if the economy slows.”

The timing and size of these elements depends on a number of things.  Consumers can stockpile goods prior to the implementation of a tariff, deferring the pinch to their pocketbooks.  Producers can work around tariffs by re-engineering their supply chains.  Government stimulus can be used to keep economic growth on track.

A key in all of this is the flexibility of consumption and production.  If there are no clear substitutes for a given product, and if it is difficult to re-work supply chains, tariffs have the potential to add more prominently to inflation.

Taking all of this into account, forecasters have estimated that the current set of tariffs against China is likely to add about 0.2% to core inflation over the next twelve months.  But if the tariffs are extended to cover all Chinese imports, inflation will shrink because of the damage done to economic activity.  The latest threatened tariffs against Mexico, if implemented, may follow a similar pattern of near-term inflation followed by a retreat.  With events moving quickly, the calculus surrounding this issue will need to be refreshed frequently.