American election cycles are impossibly long.  Whereas only six weeks will elapse between the declaration and execution of the upcoming balloting in the United Kingdom, the U.S. presidential race is already six months old and has twelve more left to run.  Politico projects that the 2020 campaign will cost about $10 billion, enough to hire more than 150,000 new teachers or maintain 350,000 miles of highway.

As my way of objecting to this interminable process, I typically don’t answer questions related to U.S. elections until the final few months before the polls open.  But we are getting a host of questions about how tax policy might evolve after the election.  As taxation is a critical consideration for business and private investment, I have agreed to break my silence…but only briefly.

A bit of background is in order before policy proposals can be considered.  The United States is not in the best fiscal position: the most recent annual federal deficit was almost $1 trillion, or 4.6% of gross domestic product (GDP).  This is partly because tax receipts as a percentage of GDP have fallen during the past four years, despite solid economic growth.

The 2017 tax reform bill is responsible for most of this decline.  Sponsors of that legislation predicted that tax reductions would spur economic growth to the point of being revenue neutral.  Those hopes have not yet been realized, and the contractionary effect of global trade battles has not helped. 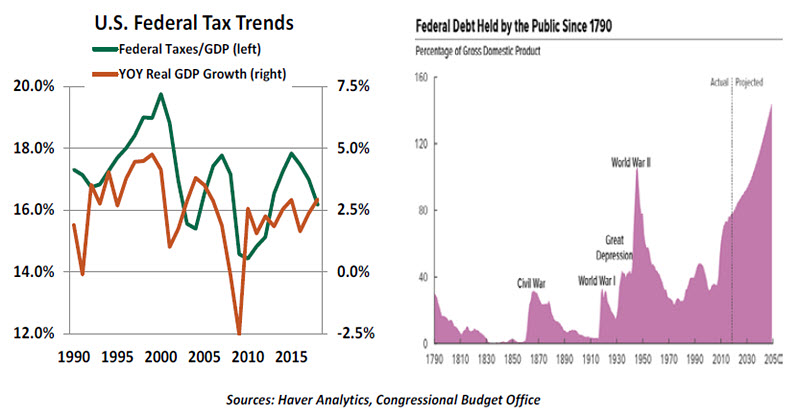 The long-term budget outlook is of greater concern.  The influence of demographics will become more pronounced in the years ahead, as the number of people receiving benefits from social security and Medicare expands.  The Congressional Budget Office, a non-partisan federal agency, projects the annual deficit as a percentage of GDP will double in size over the next thirty years, bringing aggregate federal debt to a staggering level of almost $95 trillion.

“Federal finances are in poor shape, which should prompt an honest discussion about tax receipts.”

As a consequence, the cost of carrying the debt will absorb an increasing fraction of annual outlays, placing pressure on other spending categories.  Concern among investors over the sustainability of the debt may force the U.S. to pay a higher premium to borrow, which would make matters worse.  In light of all of this, a discussion about fiscal responsibility seems warranted.  And the revenue side of the ledger has to be part of that conversation.

For some, there is another reason to reconsider our system of taxation.  The concentration of income and wealth in the highest deciles of society has risen sharply during the current expansion.  According to figures compiled by the Federal Reserve, the top 1% of American families control about 30% of aggregate net worth; the top 10% control more than two-thirds. 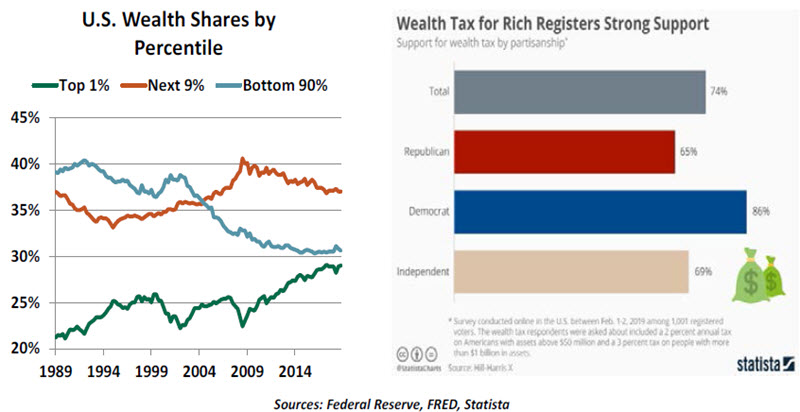 Hard work, entrepreneurship and sound investing are certainly contributors to favorable outcomes.  But the extremes of the wealth distribution, and the diminishing mobility seen within it, suggest to certain viewers that the system is tilted and needs to be leveled.  A wealth tax is one means to this end.  Polls indicate that this idea attracts support from a broad swath of the population, including some of the wealthiest Americans.

The notion of a wealth tax is not new.  In fact, a form of wealth taxation is in place in much of the United States today: the property taxes paid on real estate.  Proponents note that shifting the tax burden away from incomes helps workers keep more of what they earn.  If additional revenue is needed to keep Federal debt from spiraling out of control, it might be necessary to tap a different source.

From a social perspective, income and wealth inequality have been identified as root causes of the populism that has spread across countries during the past several years.  According to a survey from FiveThirtyEight.com, more than 60% of Americans think that the wealthy pay too little in federal taxes.  Proponents of wealth taxes suggest that remedying this situation will improve political stability.

But wealth taxes suffer from conceptual and practical challenges.  Wealth is created by investing and entrepreneurship, things an economy needs to grow.  Taxing wealth would theoretically reduce the incentives to do both of these things.  More broadly, taxing wealth is often tied to redistribution regimes that slice the pie differently but do little to help it grow.

“The political and economic issues surrounding wealth taxes are complicated.”

There are also challenges to administering a wealth tax.  Measuring value is easy for marketable securities; but the value of small and medium-sized companies is more difficult to assess, and their owners may not have sufficient liquidity to pay the tax.  Past applications of wealth taxes have prompted a range of avoidance actions that ultimately reduce effectiveness; a prime example is that businesses and people may simply move away.  The experience of Europe during the 2000s is instructive on this front.

Candidates who favor wealth taxes have tried to design them to be minimally disruptive, targeting them at the upper reaches of the distribution and exempting certain assets from assessment.  But monies raised from the levies would not necessarily be used for deficit control. Some proposals call for them to be forwarded to an expansion of federal spending on areas such as health care and education.  Those may be worthy endeavors, but would do little to correct the country’s dangerous fiscal trajectory.

Having just passed a tax reduction two years ago, it seems unlikely that Congress will reverse course. For the near future, wealth taxes are likely to remain on the sidelines.  But they will likely remain a hot topic of conversation on the campaign trail.

I very much hope that this narrative has been helpful in illustrating one of the key economic issues surrounding the 2020 election.  And with that, I will not be saying anything further on the balloting until next September.

Ryan reports on the resilience of the world oil supply.

As I was running errands on Saturday, September 14, a news alert appeared on my phone: “Saudi Arabian oil refinery attacked.”  Amid other worries about geopolitical tensions and the safety of those on the ground, my frugality kicked in.  Expecting a price shock, I made a stop to fill my car’s gasoline tank.

Energy prices did increase immediately after the attack, but the shock was brief.  The drone strike struck the outer edge of a refinery that was not staffed overnight, caused no loss of life, and was relatively easy to repair.  Saudi Arabia and its allies decided against a military retaliation; two weeks later, oil prices were below their level preceding the incident.

The attack on the Abqaiq facility was just one acute shock in a market that has endured multiple dislocations.  Iran has been subject to higher sanctions from the U.S.; the temporary waivers granted for Iranian oil expired in May 2019, effectively reducing the oil supply for the U.S. and its allies by about one million barrels per day.  Meanwhile, Venezuela’s production has fallen by over 500,000 barrels per day amid the country’s economic collapse.  Through it all, oil prices have been remarkably steady.

Oil markets have found resilience from the growth and diffusion of oil suppliers.  OPEC’s power to control energy markets was once legendary.  Though OPEC nations still lay claim to the majority of the world’s proven oil reserves, they are now just one source of oil among many.  The diversity of supply sources is helping to keep markets calm.

The greatest growth story in oil supply has been in North America.  Hydraulic fracturing, or fracking, allowed new reserves of “tight” shale oil to be discovered and brought online rapidly.  In 2018, the U.S. reclaimed the title of the world’s highest-volume oil producer, a rank it had not achieved since easily drilled oil fields in the country’s south started to run dry in the 1970s.  And the U.S. is working with its neighbor Canada to lay new high-capacity pipelines that will allow more remotely located oil to find its way to overseas customers.

North America is not alone.  Offshore reserves will soon be drilled in coastal waters ranging from Guyana to Brazil to Norway, adding even more supply to a highly liquid market.  Meanwhile, demand for oil, especially from China, is slowly falling as the global economy slows. 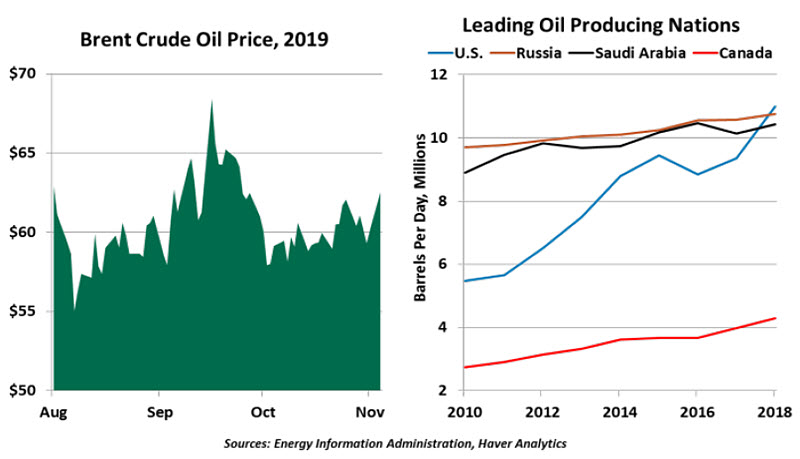 The additional supply runs counter to global goals of mitigating climate change by reducing greenhouse gas emissions.  Tight oil extraction is especially energy-intensive, and most oil is consumed by polluting internal combustion engines.  To mitigate climate change, some of the hydrocarbons in the ground will have to stay there.  But as long as oil fields are available and drilling is profitable, it will be sold to today’s consumers, regardless of long-term costs.

“Steady prices mask the intrinsic risks to the oil supply.”

For now, the steady oil price has many benefits.  Emerging markets that rely on energy imports feel the most pain from oil price spikes, and stability has helped to support them.  In developed markets, lower energy costs help to bolster consumer spending and keep inflation in check.  But September’s events taught us key infrastructure is vulnerable to attack in unpredictable manners; the next incident may be harder to brush off.  That risk may not be fully reflected in the price of oil.

As cold weather approaches in the northern hemisphere, automobile owners are reminded of the conventional wisdom to keep a full fuel tank to prevent frozen fuel lines.  In uncertain times, that homespun wisdom may help as a hedge against the next round of energy price volatility.

In more bad news for Europe and trade, the World Trade Organization (WTO) concluded 15 years of litigation over European nations’ subsidies to Airbus.  The ruling gave the United States clearance to immediately place tariffs on $7.5 billion worth of European goods annually.

The tariffs are applied to a range of imports including aircraft, wine, whiskey, olive oil and cheese from the key European Union (EU) member states that formed Airbus in 1970.  The agriculture and food industries have nothing in common with the airline industry, yet their political significance makes them a target for tariffs.  WTO rules allow for countermeasures to target products that aren’t even remotely related to the blamed industry.  The EU has filed a counter-complaint about Boeing to the WTO, which is expected to rule on that matter in the first half of 2020.

Trade relations between the U.S. and the EU were already strained in the wake of steel and aluminum tariffs enacted by the U.S. in 2018, which prompted retaliation from the EU.  And the U.S. has threatened to impose tariffs on Europe’s (specifically Germany’s) most important industry: automobiles.  The potential damage to the European economy from automotive tariffs would be much greater than that from the recent Airbus-related tariffs. 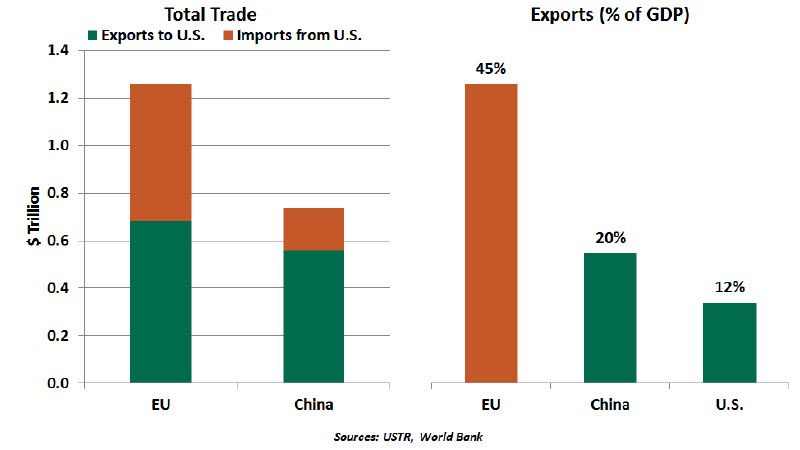 Fear of economic fallout is likely provoking the U.S. administration to seek a truce with China, as uncertainty is weighing on business investment.  External uncertainties are weighing on the EU as well, reducing its appetite for tariffs and tit-for-tat countermeasures.  Both sides would benefit from a negotiated resolution to the transatlantic trade tiff.  Opening a new front in the trade war will be excruciating for everyone, especially those Americans who love their Scotch.