Exploring the survey that is the current cause for concern.

The fourth-quarter holiday seasons have expanded to unacceptable lengths. I noticed Halloween candy for sale in August, Thanksgiving cards out in September, and Christmas decorations on the shelves…virtually year-round.  I realize the commercial aspects of these occasions have taken on increasing prominence, but I would support legislation that establishes firm timelines separating them.

However premature, the appearance of harvest-related items generally marks a turning point in the calendar. Conditions are cooling in Northern climes, and preparations are being made for chillier times ahead. The same might be said for the American economy; growth is cooling, and analysts are wondering whether a deeper chill lies ahead. Signals that gauge the temperature of business activity are receiving increased scrutiny.

Prominent among the potential leading indicators is the purchasing managers’ index (PMI) compiled by the Institute for Supply Management (ISM) and the Markit Group. PMIs are assembled for manufacturing and services across 50 countries and regions, representing a broad range of industries. PMIs have a reputation as foreshadowers of economic activity, and also have the quality, rare in economics, of being easy to explain. When the reading is above 50, expansion is expected. Below 50, contraction is likely. 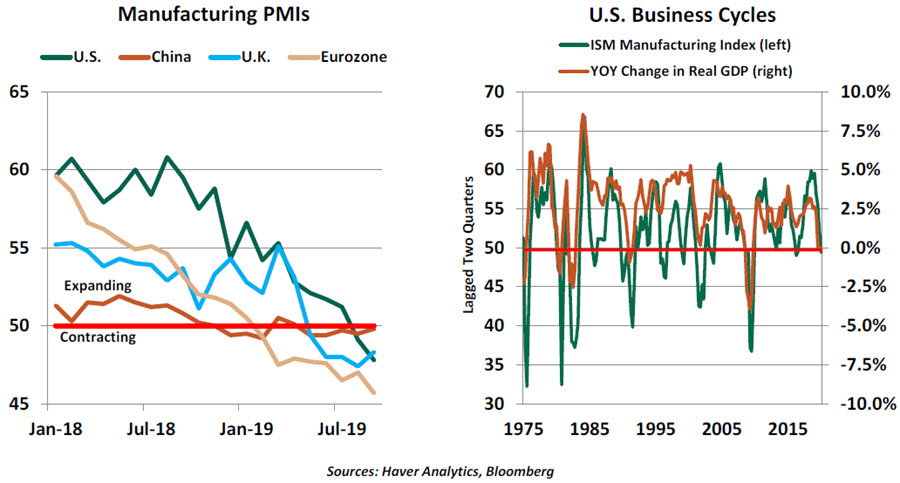 During the course of the past year, manufacturing PMIs for the world’s major centers have trended downward. All now stand below 50, some substantially so. The tightening of trade terms around the globe and the uncertainty surrounding trade negotiations are the main reasons for the spreading malaise. Negotiators for China and the United States resumed talks this week in Washington, but the two sides seem very far apart.

In the United States, where a manufacturing PMI has been produced for 70 years, movements in the reading have been closely associated with turns in the business cycle. The correspondence is not perfect; there have been numerous false positives, including dips below 50 in 2012 and 2016 that did not presage recession. Nonetheless, this reading is currently flashing yellow.

An understanding of the PMI helps to place this warning sign in perspective. The index is calculated on the basis of a monthly survey. (In the United States, more than 300 firms contribute to the reading on manufacturing.) Respondents are asked about new orders, production, employment, supplier deliveries and inventories. For each, they characterize conditions as increasing, decreasing or stagnant; the PMI is formed by taking the percentage who say conditions are increasing plus half of those who say conditions are stagnant.

This formulation is called a diffusion index. It is easy to understand, but does have some important limitations. With only three choices, the PMI survey does not account well for the magnitude of advances or declines; stagnation can mean steady growth to some and no growth to others. It asks respondents about trends versus prior periods; if activity is at a very high level, a slight decline still represents a solid pace of advancement. And because the PMI results from a survey and not a hard count, it can sometimes be long on opinion and short on substance.

Another important limitation of the manufacturing PMI as a broad business cycle indicator is that manufacturing makes up only a modest portion of gross domestic product (GDP) for many countries, and an even smaller portion of aggregate employment. In the United States, heavy industry accounts for only 11% of GDP. 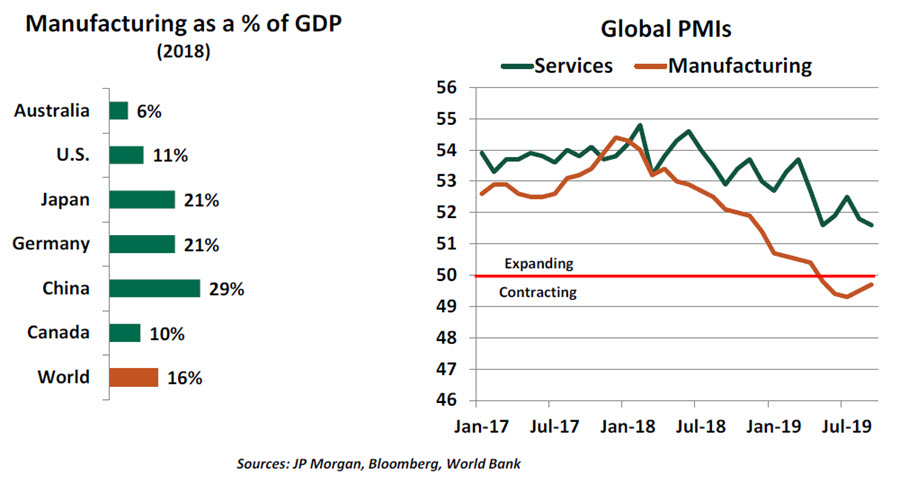 PMI readings for non-manufacturing industries have declined modestly over the past year, but remain above the 50 level which separates advance from decline. Services make up more than two-thirds of GDP for most developed countries, and services are typically produced and consumed domestically. (We don’t send our dry cleaning to overseas laundries.) The service sector is therefore much less vulnerable to shifts in trade policy.

That said, the two sides of an economy are not completely independent of one another. Manufacturing trends carry over directly into service sectors like logistics, wholesaling and retailing. And the caution signals coming from the manufacturing sector have contributed to modest declines in consumer and business confidence, which can influence spending within an economy. While heavy industry no longer accounts for the lion’s share of output, it still has an outsized hold on public perceptions of how the economy is performing.

The PMIs and confidence measures are both considered “soft” economic data because they rely on surveys as opposed to hard counts. Soft data is vulnerable to the limitations of perspective and perception, and can be shaped by emotion more than reason. They are therefore considered somewhat less reliable than “hard” data.

“We typically don’t know we’re in recession until well after one starts.”

Unfortunately, the best “hard” data reflects changes in the business cycle after they have occurred. The classic example is employment, which is arguably the most prominent of economic measures. Jobless rates typically trend up after recessions begin, as firms react to weaknesses in their revenues and profits. Trends in the labor market are therefore poor leading indicators.

The vagaries of data therefore make it especially difficult to anticipate economic decline. Soft readings are typically predictive, but less reliable; hard data is reliable, but less predictive. As a result, those charged with pinpointing the start of recessions typically don’t make that determination until months after the onset of a downturn.

There used to be a reliable leading indicator of autumn, but it has lost its predictive power. Pumpkin-spiced products used to appear a short time before Thanksgiving; this year, lattes flecked with cinnamon, nutmeg, ginger and cloves were available in late August. Again, I say, there ought to be a law.

Puerto Rico translates literally to “rich port.”  With its tropical climate and large Caribbean land mass, it would appear to be a great place to live, visit and do business. Alas, its history since becoming a territory of the United States in 1898 is checkered. But after a run of substantial setbacks, Puerto Rico may be on the road to recovery at last. And its experience may provide a playbook for use by other troubled states.

Any mention of Puerto Rico brings to mind the devastation of Hurricane Maria in September 2017. The storm did historic damage to the island, disabling the electrical grid for months and causing an estimated 2,975 deaths. Such damage would be difficult for any territory to withstand, but Maria fell upon an economy that was already struggling.

Puerto Rico’s fiscal troubles had accumulated for decades prior to Maria. An island with few natural resources, Puerto Rico is reliant on costly imports of food and oil. Its economy has benefitted from manufacturing investment, but the majority of the capital gains from development have gone to investors off the island. Leadership scandals, corruption and policy volatility have made it difficult for the island’s residents to steer a course toward lasting economic success.

Finding themselves with limited economic opportunity at home but unrestricted access (as U.S. citizens) to an economic powerhouse, many Puerto Ricans relocated to the U.S. mainland. But remittances are insufficient for sustained economic growth. Puerto Rico’s current downturn is the acute tail of a reduction in growth that started in 2004.

The island’s fiscal straits grew dire in 2015, with Puerto Rico’s first bond default. The next year, Congress passed the Puerto Rico Oversight, Management, and Economic Stability Act (PROMESA), which appointed an independent financial oversight board to create a plan to restructure Puerto Rico’s debt. In 2017, the island fell into effective bankruptcy under a bond burden of over $70 billion and unfunded pension liabilities of $49 billion. If Maria had never made landfall, the island would still be in a difficult situation, but the humanitarian needs of hurricane recovery took priority over fiscal policy.

“Puerto Rico’s bondholders will feel some pain from a restructuring.” 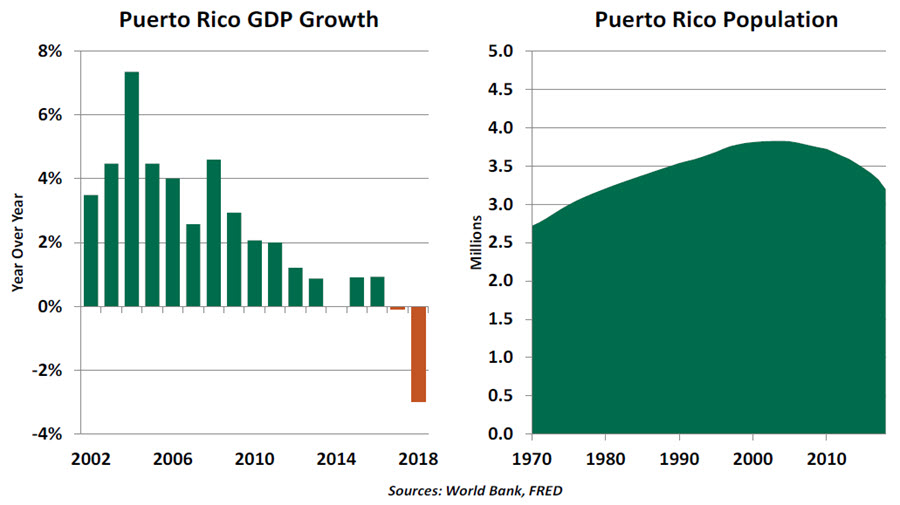 Two years on, Puerto Rico is recovering. Though reconstruction may never be complete, the electricity grid has been restored, and tourism is growing again. More encouragingly, the territory’s federal managers have proposed a way to break out of its fiscal malaise. The turnaround began with a plan to nullify $6 billion in general obligation bonds that are alleged to have been issued in violation of the debt limit in Puerto Rico’s constitution. This action led to the beginnings of proposals for bondholders to accept lower payouts. The stalemate is starting to break as debtholders are letting their common interest in repayment exceed their individual interest in not realizing a loss; a proposed recovery rate of 64% is far better than nothing.

While no other U.S. state has faced challenges as severe as those in Puerto Rico, fiscal difficulties are a common theme. Illinois is in a fiscal reckoning, finding discipline from the risk of a junk bond rating. A 2018 Mercatus Center study gave the majority of states a negative long-term fiscal outlook; many states are running out of time to attend to their liabilities. Federal law does not grant bankruptcy protection to states, and the misaligned incentives of a federal bailout of a state would be unpalatable. A focused debt negotiation may help states dig out and prevent national contagion. In the extreme, PROMESA set a precedent for federal intervention in local finances.

Given its long run of hard luck, it would be too optimistic to say the path ahead is clear for Puerto Rico. But with some mutual concessions, a way back to progress is possible.

Many of the world’s most pressing problems have proven difficult for governments to address. On these fronts, charitable organizations have stepped forward to do impressive and impactful work. Meanwhile, government institutions are pursuing solutions to public problems through structures called Social Impact Bonds (SIBs).

SIBs were created almost ten years ago to generate financial and social returns along with government cost savings. SIBs are not like classic bonds: they raise money from private investors to finance interventions for social issues. Social welfare, employment and health are the most popular targets.

Repayment and return on investment for SIBs aren’t a function of financial markets; they are contingent upon achieving desired social outcomes. If the objectives are not realized, investors might not receive a return or repayment of principal. But if the effort succeeds, funds to remunerate investors will come from the budget of the host government, donors or a combination of the two.

The U.K. issued the first SIB in 2010 to help prevent reoffending among former prisoners. Since that time, SIBs have seen impressive growth, spreading across several regions. While interest is high, SIBs can be complex structures: Payments are determined by social outcomes, which are difficult to quantify. 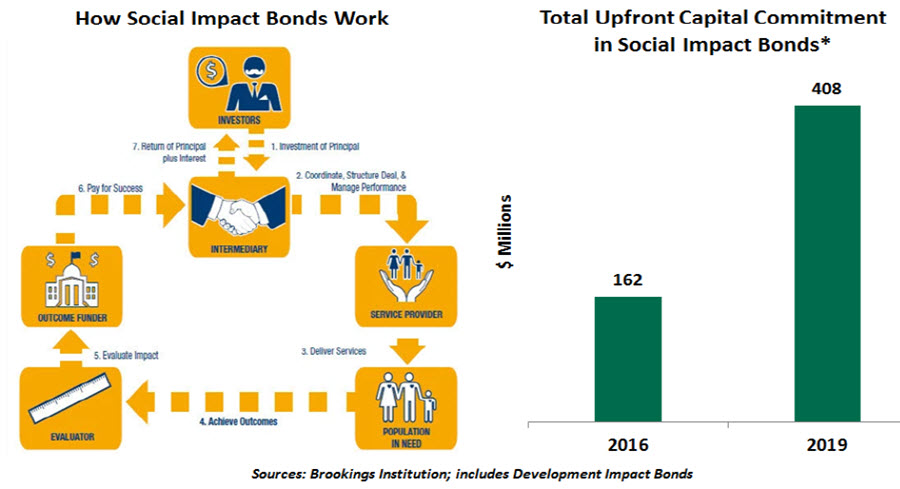 Since 2010, investment in SIBs has totaled over $400 million, mostly from philanthropists and charitable foundations but also from major financial institutions and hedge fund managers. Most SIBs have repaid investors their principal plus positive returns, ranging between 7-12%.

SIBs please governments that might struggle to achieve the same outcomes in a cost-effective way. And the objective measurement of outcomes is a powerful feature.

The last decade has not only seen a surge in social awareness but also greater investor interest in social impact investing. That said, SIBs are still a long way from mainstream adoption. But with the necessary structural changes and improvement in measurement mechanisms, SIBs can lead to better outcomes for poor and vulnerable populations around the world.