Economic Commentary: “Phase One” Among Several, Canada Elections, and Nobel Prize for a Noble Cause

On March 22, 2018, the Office of the U.S. Trade Representative announced it would place sanctions on China under Section 301 of the Trade Act of 1974.  Ever since, impatience for a trade deal has grown among all observers.

On October 11, 2019, after a series of fruitless negotiations, tariff escalations and retaliations, President Trump heralded “Phase One” of a trade agreement with China.  But those who were hoping for a broad and durable trade deal that reduces U.S.-China tensions will continue to have their patience tested.

Expectations for the latest round of negotiations were low, and they were met.  The brightest news is that the U.S. deferred a tariff rate increase from 25% to 30% on certain consumer durables scheduled for October 15, and both sides agreed that negotiations will continue.

China committed to purchase substantially more agricultural exports from the U.S., alleviating some of the pressure on domestic farmers (and helping to feed China’s population of over a billion pork- and soy-hungry people).  The notional commitment of $50 billion of agricultural purchases is roughly double the quantity China imported prior to any trade negotiations, and may be more of an aspiration than a quota. 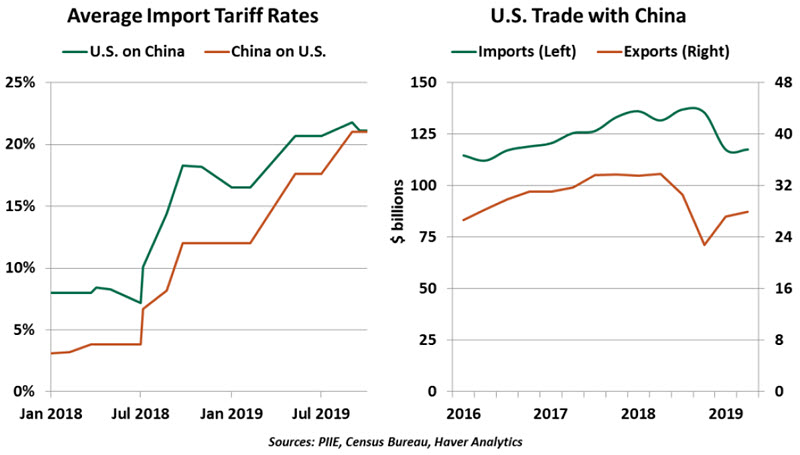 The “Phase One” announcement left much to be desired. It is missing:

“Disagreements between the U.S. and China have grown far beyond trade.”

And these are just the matters related strictly to trade.  Negotiations have yet to substantively tackle the bevy of other emerging issues that have raised tensions between the U.S. and China: alleged exchange rate manipulation, 5G network development, Huawei’s corporate ethics violations, responses to unrest in Hong Kong, exports of opiate painkillers and human rights investigations related to the Uyghur people. With each new area of stress, goodwill between the two countries falls, and the prospects of finding even a limited deal feel more remote. 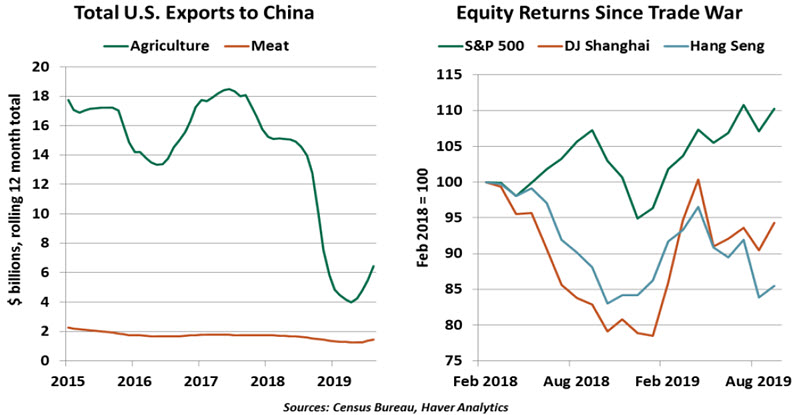 Of all the varied U.S. trade confrontations, trade with China was the issue that most needed to be addressed.  China’s rise since its economic reforms of the late 1970s was supported by protections that were unfair to all other countries, not just the United States.  Tariffs have been effective at getting China to come to the negotiating table.  Once there, however, discussions have continually fizzled.  The U.S. negotiating posture has shifted unexpectedly, as different voices within the administration take the lead.  And China has allegedly retreated from commitments.  For every step forward, there has been at least one step backward.

The pain from tariffs is accumulating.  The overall effect of tariffs is slower growth for both countries, causing collateral damage to other economies.  This week, the International Monetary Fund revised its global growth outlook downward, estimating that “U.S.-China trade tensions will cumulatively reduce the level of global GDP by 0.8 percent by 2020.”

As the 2020 U.S. presidential campaign heats up, politics may motivate deal-making.  The U.S. Administration may seek to finalize an agreement to be touted as a first-term accomplishment.  But any Democratic challenger will attack any deal as incomplete or ineffective.

“Incremental progress is the best we can hope for.”

China, meanwhile, is enduring important amounts of economic discomfort.  The conflict with its largest trading partner was unfortunately timed with a broad global slowdown, reducing demand for goods, and an outbreak of swine flu that has raised food prices.  China’s economic growth has fallen to a 30-year low, and its equity markets are offering meager returns.

Some think that China is waiting out the Trump administration, hoping for the election of a more conventional politician.  But incumbents are reelected more often than not, and democrats have historically been more suspicious of free trade and more willing to regulate commerce.  As we have suggested, time may not be on China’s side.

The optimism surrounding the “Phase One” announcement dissipated quickly.  This week, China hedged on its commitment to agricultural purchases, tying it to a U.S. commitment to drop a planned 15% tariff on more than $150 billion of consumer goods set to begin in December.  The ambiguity surrounding this situation illustrates the limited substance of last week’s discussions.

Sad to say, the chasm between China and the United States has grown deeper and wider since the first tariffs went into force last year.  If a deal is to be found, it will likely be limited in scope, leaving considerable uncertainty for global supply chains and global investors.  And the path to even a limited deal is likely to travel through multiple phases.

Canada boasts the world’s second largest geographical area, after Russia.  On Monday, Canada will have an election to decide whether to give Prime Minister Justin Trudeau a second term.  For many, Trudeau has presided over a period of prosperity.  But a rising share of voters perceive that Canada’s problems are growing as large as its land mass.

Canada has a lot to recommend it.  The country ranks the best among the G7 nations in the Organization for Economic Co-operation and Development’s (OECD) Better Life Index, describing living conditions and quality of life.  Canada is also hailed for its immigration policies by several international observers, including the OECD.

Canada’s economic numbers appear strong at first glance. Unemployment is near record lows (5.5%), inflation of 1.8% is close to the target of 2%, and average hourly wages have been steadily increasing.  Unlike other central banks, the Bank of Canada has not yet needed to reduce its interest rates to support growth.

Trudeau has managed to deliver on a number of other undertakings, including a child benefit program that has helped lower poverty levels across the nation to record lows.  Though the country’s federal deficit could widen to above 1% of GDP next year, it remains very low among developed nations.

Many see Canada as a well-positioned gateway to larger markets, particularly the U.S.   The Canada-EU Comprehensive Economic and Trade Agreement (now in effect) and the North American Free Trade Agreement offer foreign investors preferential access to both America and Europe.  Canada is also rich in natural resources, with large oil reserves.

This makes trade (both imports and exports) a vital component of its economy and accounts for more than a third of gross domestic product.  The U.S. is Canada’s largest trading partner: about 76% of Canada’s exports go to the U.S., and over 60% of imports originate there.  The new United States-Mexico-Canada Agreement (USMCA) is crucial for Canada’s economic prospects.  Ratification of the USMCA will be complex (currently held up in procedural reviews) in the U.S. but probably not so much in Canada.  The bill will be re-introduced in the next Canadian parliament, which thus far has maintained its ratification process will move in tandem with the United States.

But while all of this casts Canada in a good light, some in the electorate appear to disagree.  Consumers’ wallets and broad economic issues are among the top issues cited by voters.  According to an Ipsos poll, 68% of Canadians feel like they can’t get ahead, and 82% say they feel things are becoming less affordable.  Canada’s housing is the least affordable among the major world economies, with a house price-to-income ratio of 120%.  Canadian households have the highest debt to income ratio (165%) among major advanced economies. 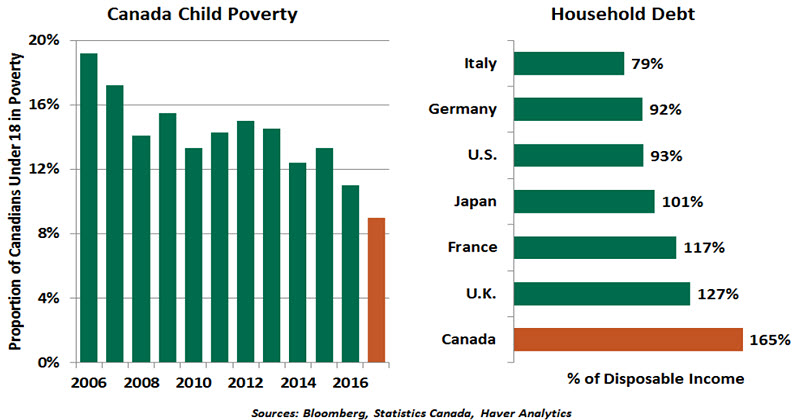 In 2015, Trudeau’s message of hope, change, tolerance and equality echoed that of former U.S. president Barack Obama.  But his brand appears to be fading quickly as voter perceptions about the health of Canada’s economy diminish.  The polls suggest it will be a close fight, with a minority government the most likely outcome.  Canada has been a star performer, but Justin Trudeau’s star may have lost its luster.

The Nobel Memorial Prize in Economic Sciences was awarded this year to a trio of economists for studying efforts to reduce poverty.  Using a rigorous experimental approach, they have illustrated ways in which society can get better outcomes out of aid earmarked for struggling communities.

Poverty rates around the globe have fallen dramatically over the past two decades, from about 27% of the world’s population to just over 10%.  That is the good news; the bad news is there are still 700 million people who fall short of the poverty threshold of $1.90 per person per day, more than half of whom live in Africa.

Reducing poverty has long been a focus of public policy and private philanthropy.  Well over $100 billion per year is invested in aid to the poor.  This year’s Nobel laureates, Abhijit Banerjee, Esther Duflo and Michael Kremer, have spent their careers asking whether this money is being effectively deployed. 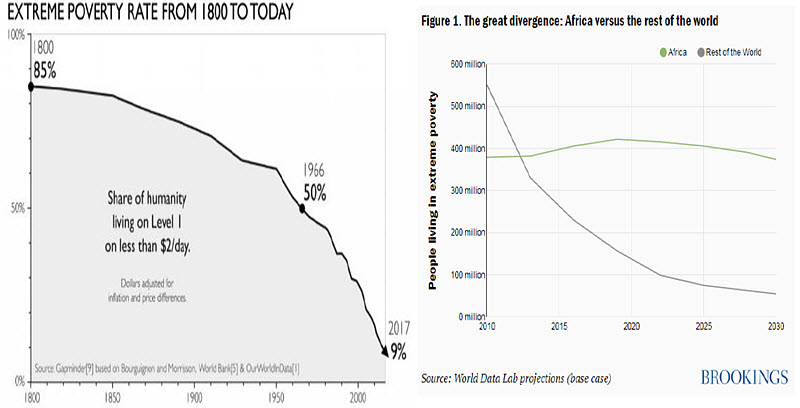 It is difficult to study this subject in the aggregate, so the researchers focused their attention on specific programs.  They used scientific methods to generate data that pointed to the most effective courses of action.  As an example, the best means of improving educational attainment in some disadvantaged communities was not investment in teachers, books or classrooms.  Spending the money to improve nutrition and health had the biggest impact on school attendance and achievement.

Esther Duflo is receiving particular acclaim.  She is only the second woman to win the Nobel Prize in Economics, and at 46 is the youngest recipient ever.  This TED talk from a few years ago gives a taste of her intelligence.

With charitable causes and socially-conscious investors anxious for tangible results, the work of Banerjee, Duflo and Kremer provides a framework for getting the best returns on social capital.  Their recognition is well-deserved.