Economic Commentary: Argentina and the IMF, a Legislative Impasse, and Capital Markets Threatened in Trade War

Testing times for relations in this challenging epoch.

Relations between Argentina and the International Monetary Fund (IMF) have been stressed from the beginning.  The Latin American nation was not invited to the 1944 Bretton Woods conference that established the IMF.  Two years later, Argentina was invited to join, but then-Argentine President Juan Perón declined, calling the body an “imperialist spawn.”  Argentina reconsidered and joined the IMF in 1956, marking the beginning of a love-hate relationship that has grown deeper with time.

In its turbulent economic history, Argentina has turned to the Fund on numerous occasions.  Some have been successful; others less so.  In October 2018, the IMF approved financial assistance to Argentina of $56 billion, the largest loan in the history of the Fund.  Everything seemed fine until last month, when the country’s fortunes took a sharp negative turn.  It now appears that the IMF may have thrown good money after bad.

Argentina’s current president, Mauricio Macri, came into the office under challenging circumstances but was widely praised for his reformist agenda.  He lifted capital controls to borrow more at low interest rates, with the proceeds used to lift the economy.  But by the middle of 2018, rising protectionism caused a reversal in sentiment and capital flows.  The peso depreciated sharply (it has lost two-thirds of its value versus the U.S. dollar since early 2018), pushing inflation to more than 50% this year. 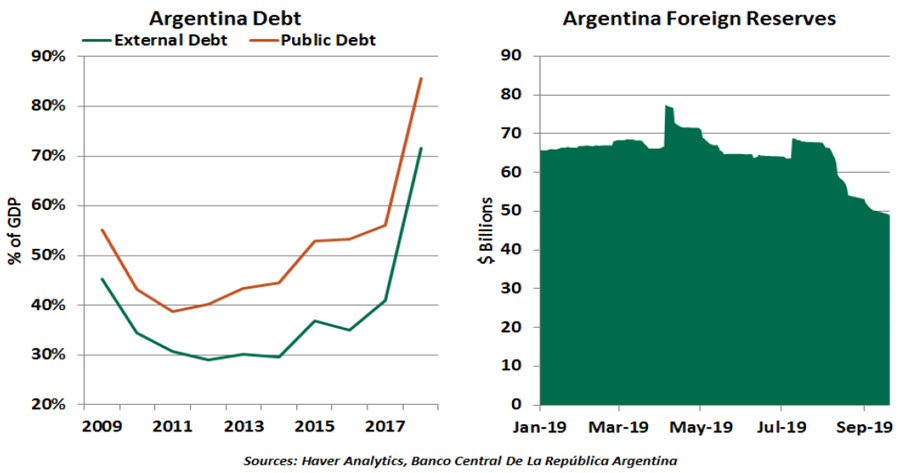 With over $100 billion in foreign debt, well in excess of its reserves, Argentina is facing the risk of default.  Its problem is not liquidity, as the government tries to suggest.  For most of the past three decades, Argentina has had the lowest total reserves (24% of total external debt) among the major emerging economies.  Argentine banks have been tapping into their central bank reserves to fund swelling client withdrawals. The country’s foreign reserve levels, a key target for the IMF, have dipped by $15 billion since mid-August, making adherence to repayment schedules almost impossible.

With pressure mounting, the Macri administration announced a plan to extend debt maturities, including monies owed to the IMF.    This step is an admission of financial defeat, one that will be costly for him and for his country. The situation will also prove costly for the IMF, and not just monetarily.

“Argentina is likely headed for its ninth sovereign default.”

Questions are being raised about the IMF’s approach to Argentina. After over 20 bailouts, Argentina’s excessive borrowing and repeated defaults suggest the country’s problems are beyond the IMF’s ability to correct.  While the IMF has indicated that it will “continue to stand with Argentina during these challenging times,” it has not yet disbursed the next tranche ($5.4 billion) of funds due under the most recent bailout.

An important condition that the IMF attaches to most of its financial assistance is fiscal austerity.  President Macri relied on a gradual approach to bringing public spending down, hoping that steady growth and access to foreign borrowing would lift the economy out of its rut.  Unfortunately, things did not go as planned.

The government also failed to rein in inflation, partly owing to its 2018 adoption of “a floating exchange rate regime without intervention,” advocated by the IMF.  For most of the 1990s, Argentina had successfully contained inflation through its use of a fixed exchange rate. 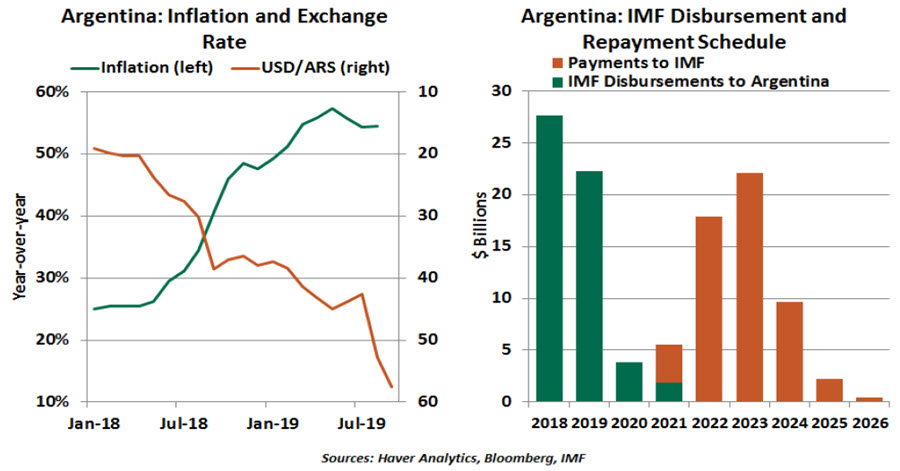 Argentina’s case suggests the IMF playbook is in desperate need of review.  And some of the IMF’s patrons will certainly have reason to wonder whether their funds are being put to the best possible use.  Argentina’s favorable relationship with the U.S. (which holds the biggest share of votes on the IMF board) may have helped Argentina secure a huge loan without going through normal governance procedures, another area where some reform may be needed.

The IMF is assessing Argentina’s proposed measures to extend the maturity profile of its debt.  But complicating the evaluation is President Macri’s likely defeat in elections later this month.  A new administration might prefer to undertake another debt restructuring (writing down principal instead of extending maturities).  That would be even more painful for Argentina’s creditors, and could potentially create a large loss for the IMF.

The IMF is also working through a leadership transition.  Kristalina Georgieva, who just succeeded Christine Lagarde as the IMF chief, has several weighty matters to consider: in addition to Argentina, Ukraine and Pakistan will require funds and attention in the months ahead.  All are frequent borrowers with unstable financial systems and economies.

“The IMF’s difficulty in Argentina will lead to more scrutiny on its other programs.”

The IMF was chartered to assist troubled countries during periods of duress and is the lender of last resort to nations struggling with their finances.  Its work is important, as history illustrates.  In 1976, the United Kingdom took out what was then the largest loan in the history of the Fund, an event captured in the recent book “When Britain Went Bust.”  The loan, which Britain fully repaid, helped stabilize the pound and fueled stronger growth.  The existence of a backstop for developed and emerging markets alike is an important ingredient for global financial stability.  But in a world of rising nationalism, support for the IMF’s mission may be compromised.

One way or another, Argentina will have to make good on its debt, as a nation cannot technically default on the IMF, but the Fund won’t be repaid anytime soon.  The situation with Argentina has placed the IMF’s political capital at risk and called the Fund’s credibility into question.  The damage to both parties may be substantial.

This week, the Rosh Hashanah holiday marked the start of the year 5780 on the Hebrew calendar.  Meanwhile, the U.S. government started fiscal year 2020 on October 1.  Unfortunately, there is little to celebrate in Washington at the moment.

Last week, the House of Representatives initiated an impeachment investigation.  The probe will increase animosity between the executive and legislative branches, and between the two houses of Congress.  We make no predictions of how the situation will play out, except to suggest that it will remain in the headlines for some time to come.

The attention absorbed by the impeachment matter and the rancor it is engendering will limit Congress’s action on economic measures.  Foremost among them will be the federal budget.  Congress did not agree on the specifics of a new budget before the last fiscal year ended; instead, lawmakers passed a continuing resolution to fund the government through November 21, maintaining funding at last year’s levels.

Without further action before that date, the country would experience another government shutdown.  Political leaders have little appetite for that outcome entering an election year.  But continuing resolutions are not an ideal way to steer a $4.4 trillion budget.

Federal finances deserve careful attention.  In fiscal year 2019 (which ended on September 30), the U.S. government ran a deficit of over one trillion dollars.  It is unusual to see the imbalance grow during a period of steady growth.  The main reason for this outcome is that the tax reform of 2017 has not lived up to the expectations of its sponsors.

That bill provided most individuals with a small tax reduction, which helped to sustain consumer spending throughout 2018.  But the benefits were more modest than advertised, especially for individuals in states where changes to deductibility of state and local taxes were a net negative.  The tailwind to consumption seems to have worn off.

The same is true for business investment.  Tax reform reduced the headline corporate tax rate from 35% to 21%, allowed immediate expensing of capital investments and granted favorable treatment to many types of pass-through income (such as those earned by small businesses).  We did witness a surge in business investment in the first half of 2018, but results since then have been disappointing.  Fixed investment fell by 1% on an annualized basis in the second quarter, and leading indicators do not suggest a recovery in the offing.

“Any benefits from tax reform were short-lived.”

At the same time Congress will need to reckon with more red ink, calls are arising for additional federal spending.  With recession risk rising and monetary policy running out of room, measures to stimulate growth may merit consideration.  Unfortunately, the time for consideration may be limited by impeachment proceedings.

Other potential casualties of a legislative impasse include:

The Hebrew New Year is a time for celebration, reflection and resolutions to make the year ahead a better one.  Washington would do well to approach its new year in that same spirit.

Trade talks between the United States and China took a hiatus this week to allow China to celebrate the 70th anniversary of the communist republic.  Negotiations are set to resume next week in Washington.

In a show of good faith, the White House deferred the next round of tariff increases by two weeks.  But at the same time, the administration has been working on plans to restrict investments by Americans in Chinese companies.  Several measures are reportedly under consideration:

Ostensibly, these steps are based on the lack of transparency into Chinese firms’ accounts.  Western auditors have been frustrated at their lack of access to the books and records of Chinese companies, making it impossible for them to validate their financial statements.  But few doubt that the main reason for the restrictions is to gain leverage in ongoing trade negotiations.

Access to Western capital is critical for China.  The country is deeply indebted and needs fresh funding to sustain growth and financial stability.  China has pushed hard to have more of its assets included in global indexes, which would ensure regular flows from passive investors.  And it recently relaxed restrictions on inbound capital flows.

“Restricting investments in China will be harmful to American investors.”

Meanwhile, Western investors are anxious for a chance to tap into the growth, innovation and diversification offered by Chinese holdings.  And Western financial institutions have been anxious to gain a foothold in one of the world’s fastest-growing financial markets.  An editorial in the Wall Street Journal therefore called the proposed investment restrictions “The Worst China Trade Idea.”

This issue is another illustration of how closely tied the economies of China and the United States have become, and what each side stands to lose if those ties are broken.