We've written at some length this year about the world's poor preparation for retirement, which will become more apparent as populations age. In this issue, we examine three areas that illustrate the immensity of this issue.

Editor’s note: we’ve written at some length this year about the world’s poor preparation for retirement, which will become more apparent as populations age. In this issue, we examine three areas that illustrate the immensity of this issue.

At my wife’s urging, I’ve recently spent some time organizing my affairs. While I trust her interest in the exercise is administrative, last week I saw a spreadsheet on her computer indicating I was worth more dead than alive. Cold calculus, indeed.

Among the inventory of statements I assembled were pension statements from two prior employers. Although I confidently placed the promised benefits into our projections of retirement income, recent news has given me pause. The funding of corporate pension plans is not always robust, and if the plans falter, the agency that serves as a backstop is in such bad financial condition it can guarantee nothing.

That agency is the Pension Benefit Guaranty Corporation (PBGC). The PBGC is technically insolvent; without a massive recapitalization from the U.S. Congress, millions of pensioners will face a substantial loss of retirement income. The story of how the PBGC reached this precipice includes sad chapters that detail the failure of retirement systems more broadly.

The PBGC acts as an insurance company to private pension plans, charging premiums based on the size and funded status of each plan. It has two programs: one for individual plans, and a second for a collection of plans across a range of heavy industries (referred to as the “multiemployer plan”). The former faces challenges, but is reasonably balanced. The latter is in dire condition. 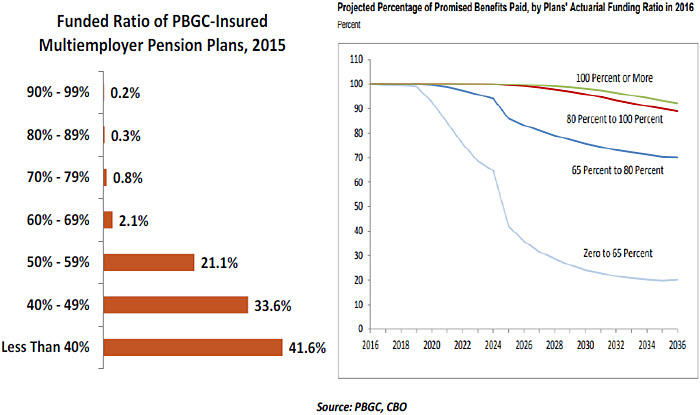 When a company fails, its pension is turned over to the PBGC for administration. If the assets in the plan are sufficient to meet retirement payments (represented by a positive “funded ratio”), the PBGC simply takes over operations and beneficiaries receive the amounts they were promised.

If the funded ratio is insufficient, plan participants will see their benefits reduced, in some cases very sharply. Unfortunately, the poor condition of many pension plans places a considerable number of retirees at risk.

How is it possible, you might ask, that a pension plan could arrive at such low funding levels? The answer lies partly in the poor investment choices made by plan managers, and partly in a pension accounting system in desperate need of reform.

Determining whether a pension plan is properly funded is a combination of art and science. The science is centered on demographics, which paint a reasonably reliable picture of how long people are likely to live (and therefore how long they are likely to be drawing retirement benefits). Actuaries do a pretty good job of estimating the retirement annuities that plans will be liable for.

But then art enters the picture. Because most pension payments extend many years into the future, plans are allowed to discount them back to the present, often at rates far in excess of current market yields. And plans are allowed to assume their asset values will grow over time at a steady rate; on average, pension plans project an annual rate of return of over 7%. If actual yearly returns fall short of assumptions, plans are given a long time to make up the difference.

Current accounting treatments can therefore greatly overstate the true health of defined benefit plans. They allow pension sponsors to delay making contributions to their plans for longer than they should. Public and private plan sponsors have financial targets to meet, creating incentives not fully consistent with pension solvency. Misaligned incentives abound.

When things go wrong, the PBGC steps in. The bane of the PBGC’s existence is its multiemployer program, which uses a single pool to cover 10 million workers across 1,400 plans. The pooling feature of the multi-employer program used to be seen as a strength; if one plan failed, others could cover. But failures in the program have been so numerous that those still operating cannot compensate. The PBGC is looking at a $69 billion shortfall in the multiemployer plan, and some think that might be a low estimate. 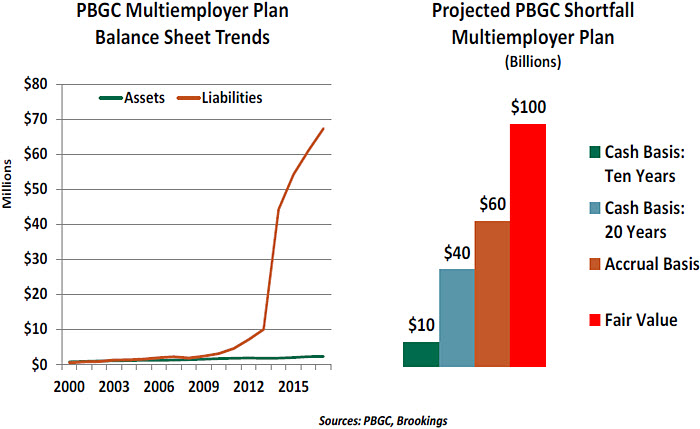 No remedy will be without pain. Some combination of substantial increases in premiums for surviving plans, reduced benefits for participants and capital infusions from Congress will be required. Congress missed a self-imposed deadline of November 30 to recommend measures to stabilize the PBGC. Facing budgetary pressure, legislators are trying to find an inexpensive way out; but dealing with the challenge piecemeal will likely make the solution more expensive in the long run.

Unfortunately, we will all pay the price for poor pension administration.

The PBGC’s problems reflect the ills that have plagued retirement programs more generally. Individuals, firms and governments have failed to properly assess the amount of saving required for retirement and make the investments early enough. Having arrived on the doorstep of a retirement boom without adequate resources, they are attempting to find
short-term fixes to compensate for lifetimes of mismanagement. In the case of the PBGC, the numbers are simply not adding up, and taxpayers are on the hook.

My life insurance provides additional compensation if my demise occurs during a business trip. Ever since I finished my record-keeping project, I’ve experienced an inordinate number of maintenance problems during air travel. I think my wife is trying to collect on my pensions while she still can.

Unlike private pension plans that can call upon a federal backstop, the 90,000 state and local government pension plans in the U.S. must sustain themselves. More than 25 million Americans are affiliated with a public pension as either a member or a beneficiary. Escalating pension payouts are leading to stressed state finances.

Pension burdens are growing due to persistent underperformance of pension investments relative to their targets. A 2016 analysis by the Pew Charitable Trusts found the median public pension plan’s investments returned about 1%, well below the median assumption of 7.5%, adding about $146 billion to the total funding gap. The aggressive strategies required to sustain a 7.5% return each year would require risk taking beyond the comfort level of most pension trustees. As of 2016, the majority of state and local pension system holdings were corporate stocks and international securities, suggesting a heightened appetite for risk. But with benefit payments rising quickly, plans should normally be getting more conservative at this juncture. 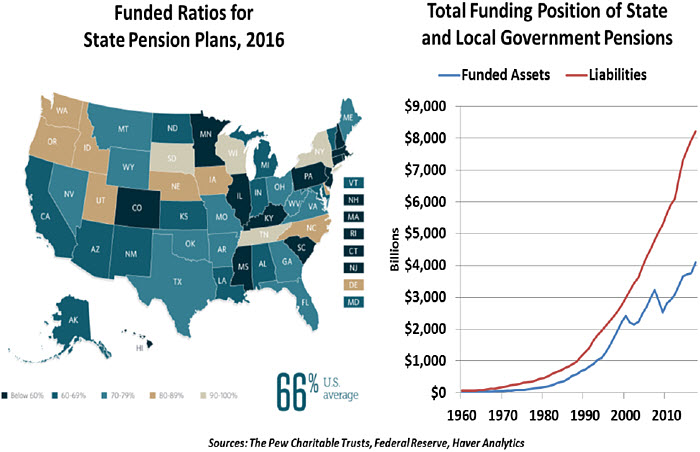 Not long ago, pension managers’ jobs were easier. They could take advantage of pensions’ long investment horizons and buy illiquid instruments that paid well with low risk. As recently as 1997, the U.S. Treasury auctioned 30-year bonds that paid yields over 7%, easily meeting pension plans’ target returns. As rates continued their long-running decline, fund managers have had to take more risks to earn equivalent returns.

It is difficult to cut benefits or raise taxes, placing states in a pension bind.

Renegotiating pensions is rarely an option. Many government jobs are not known to pay well, and workers are enticed by the promise of a future pension. Police officers and firefighters face a mandatory retirement age and may not be able to continue working as long as they would like. Seeking to reassure their workers, seven states codified their pension obligations in their state constitutions. These protections are only adding to the
difficulty, and workers expecting pensions would do well to make contingency plans in case promised benefits are altered by necessity.

There is no simple remedy to pension shortfalls. Markets are not a panacea; recent equity market volatility has put 2018 on track to be a year of low returns. Even if pension portfolios were earning their projected returns, the funding gap would stand to increase due to shortfalls in contributions from current workers. Meanwhile, the flow of workers entering retirement and starting to collect pension payments will not subside for years. Absent a painful cycle of reform, taxpayers can expect a long horizon of future payments for pension obligations.

Holes in the Global Safety Net

Setting up financial security for retirement is vital for individuals and societies around the world. A robust pension system can help create a stable and prosperous economy. As life expectancy continues to increase, ensuring sustainable benefits is critical.

Unfortunately, shortfalls in global retirement systems are soaring. According to a World Economic Forum Report, public, corporate and individual pension systems in major developed economies will face a shortfall of $224 trillion by 2050. When China and India are included, the deficit is expected to soar from $67 trillion today to $428 trillion in 2050, roughly five times today’s global gross domestic product. 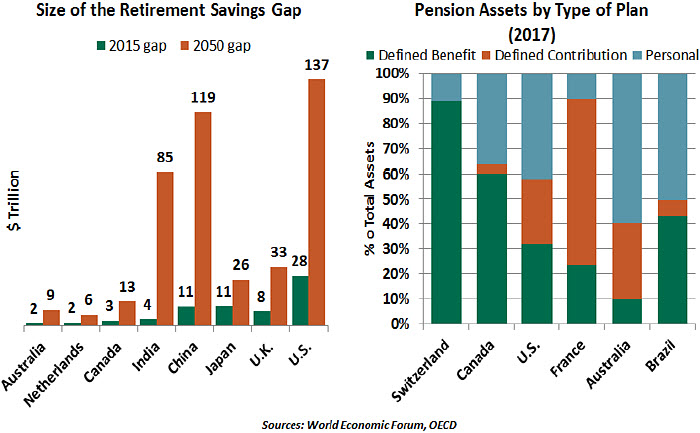 The U.S., Canada and Switzerland (among other countries) still have a reasonably high share of assets in defined benefit plans, and have seen a drop in their funding ratios. This implies that liabilities have grown at a quicker pace than assets despite adjustments to benefit formulas and accrual rates.

Pension funding levels have taken a hit since the 2008 financial crisis, owing to record low interest rates and below-par asset returns. Though equity markets have performed well thanks to ample liquidity, several pension funds have reduced their equity exposure, missing out on higher returns. In the U.K., equity allocations have fallen notably from 36% in 2006 to 13% in 2017, while the allocations to bills and bonds rose from 19% to 28% over the same period.

Weak retirement systems threaten to create social and economic problems across the globe.

Retirement income schemes are diverse, involving packages that have evolved with each country’s economic, social and political conditions. Some are state-sponsored, others rely on employers and some mandate individual retirement accounts. Some guarantee a level of benefits, while others do not; some have backstops in the event that savings and asset values are insufficient.

According to the Mercer’s Global Pension Index 2018, Denmark has the most sustainable pension system, with a public basic pension scheme, a means-tested supplementary pension benefit, a fully funded defined contribution scheme and mandatory occupational schemes. By contrast, Italy and Austria have the weakest retirement systems. The spectrum of approaches provides interesting lessons for policy makers. Here is a look at some features of the world’s retirement systems:

Though retirement systems differ across countries, most will be faced with similar problems over the coming decades. Reforms will hold the key to making these systems better and sustainable. Several nations are increasing the retirement age, while others are promoting higher labor participation at older ages. Many are encouraging higher private savings, limiting pre-retirement withdrawals and reviewing public pension indexation.

The strain faced by retirement systems is by far the biggest longer-term concern for people across countries and age groups. Policy makers have neglected this concern for too long; it must receive more attention going forward.