The Federal Open Market Committee (FOMC) meets next week, and it will be a highly anticipated gathering.  Futures markets and Fed watchers are certain of a rate cut, but the path of the Fed Funds rate thereafter is a subject of much debate.  Here, in the equivocal fashion favored by economists, are the arguments on both sides.

On the one hand, why might the Fed wait to cut rates further?

Employment is strong. The Federal Reserve has a dual mandate to maximize employment and maintain stable prices.  The U.S. employment picture has been rosy, with the unemployment rate holding at 3.7%.  Job creation cooled in August but remains healthy for an economy a decade into an expansion cycle.

Consumer spending continues unabated.  Consumers were the bright spot of the second-quarter gross domestic product (GDP) estimate, outperforming amid an otherwise mixed picture.  Personal consumption expenditures grew at a healthy 4.2% year-over-year pace in July, suggesting continued momentum going into the third quarter.  We hold out hope that the sudden drop in the University of Michigan Consumer Sentiment Index in August was a one-month aberration, not the start of a trend. 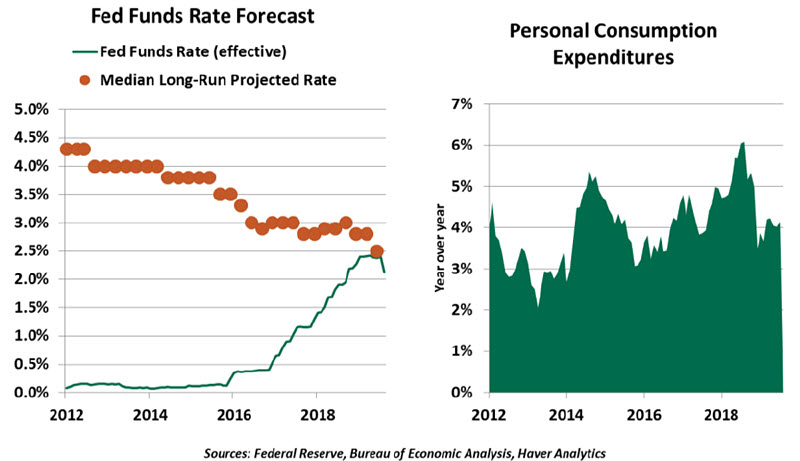 Interest rates are low.  Consumers and corporations alike are finding that credit is available and affordable.  The cost of financing is not a deterrent to investment.  Credit spreads (the yield on corporate bonds relative to risk-free government bonds) remain low, a sign of high liquidity and low risk in fixed income markets.  Taken together, these developments produce easy financial conditions.

With growth balanced across sectors, asset bubbles are not a worry at the moment.  We would like to keep it that way.  Low rates can lead to speculative investments into riskier asset classes as investors reach for yield.  The Fed is intent on sustaining financial stability.

“Central banks cannot ignore trade conflicts, but cannot do much to mitigate them.”

And the Fed must be careful about the signal that would be sent by an aggressive string of rate cuts.  This would quickly take it from a mid-course correction (the rationale for July’s action) to something more panicked.  If the Fed appears nervous, fear may be contagious.

On the other hand, why might the Fed cut more aggressively?

Trade and global market risks continue to grow.  In the July press conference, Fed Chair Jerome Powell consistently emphasized that the Fed was acting to support the expansion against the risk that trade tensions would cause a global slowdown.  Since then, those risks have only increased, starting with an escalation of U.S. tariffs on Chinese imports the day after the Fed meeting.  While negotiations are back on for next month, hopes are not high for a broad resolution.

Business spending has slowed.  Estimates of second-quarter gross domestic product saw a decline in business investment, a sign of elevated uncertainty.  This month, the U.S. manufacturing Purchasing Managers’ Index (PMI) fell to 49.1, the first sign of contraction in over three years.  And in the near future, the effects of fiscal stimulus, particularly the Tax Cuts and Jobs Act of 2017, will fade.  A lower-rate environment can help to offset the loss of momentum.

Rates are falling worldwide, with the U.S. standing out for its relatively high yields.  There is clearly still investor appetite for safe, lower-yielding debt.  However, there is no requirement that rates must align internationally. 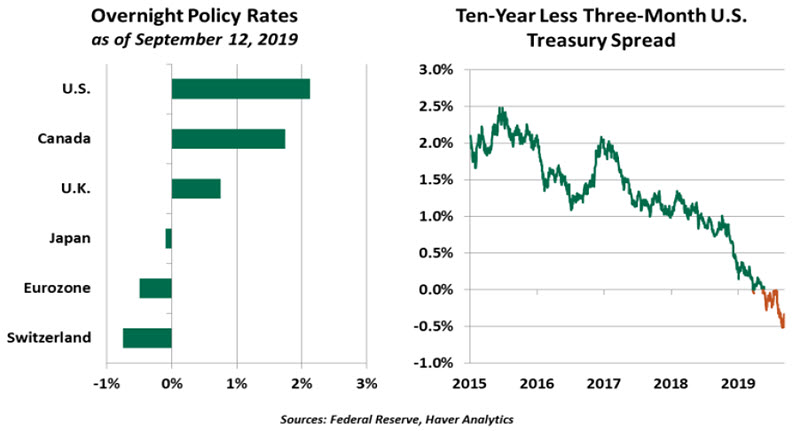 Inflation remains below the Fed’s target, despite robust economic activity.  The economy has not been able to sustain 2% inflation amid low unemployment and elevated consumer activity.  Earlier this year, there was speculation the Fed might cut rates to help achieve its 2% inflation target.  We found those rumors to be a bridge too far.  While we do not expect the Fed would act solely to meet an inflation target, it is one more reason to ease.

The yield curve would certainly benefit from more Fed action.  The spread between three-month rates and ten-year rates has been inverted for most of the past four months; cutting rates would help to normalize the yield curve by lowering the short end, minimizing recession worries that can become self-fulfilling.

“Another cut next week is assured, but the path from there is not.”

Finally, market expectations must weigh on the Fed.  Futures markets are skewed toward cuts.  The Fed has no mandate to appease markets, but it does not want to cause a panic through surprises, either.  Fewer rate cuts may mean tighter financial conditions if the market re-sets expectations.

Next week’s meeting will include an updated quarterly Summary of Economic Projections (SEP), in which FOMC members share their outlook for the Fed Funds rate, economic growth, unemployment and inflation.  The June 2019 SEP was notable for its reduction in the projected interest rate path.  We will watch closely for any sign that the committee members fear a downturn is coming, a precondition for further cuts.

We expect dissenting votes will be the norm for this and most future decisions.  The June decision to hold the rate steady included a dissent from an FOMC member who wanted a cut; the July cut had two dissents from governors who preferred to hold.  Recent public statements by Fed officials have revealed no consensus.  We view the dissents as a healthy sign of a deliberative body at work.

We are hopeful that Powell’s remarks will be well-rehearsed.  At the July press conference, the Fed Chairman caused confusion by referring to the rate cut as a “mid-cycle” adjustment, a term the media and analysts had not heard previously.  In December 2018, Powell characterized the Fed’s balance sheet reduction as running “on autopilot,” which markets interpreted as the Fed ignoring market signals.  Markets performed poorly thereafter.

We do not envy FOMC members’ jobs at this point in the cycle.  With so many arguments for and against any decision, criticism will surround any action.  Please follow us on Twitter for our real-time read on Wednesday’s decision and likely next steps.

European Central Bank (ECB) President Mario Draghi cemented his legacy as defender of the euro by delivering a parting gift at his penultimate meeting.  The ECB cut its deposit rate by 10bps to negative 0.50%, introduced a two-tiered rate system and will restart its quantitative easing (QE) program on November 1.  In addition, a new targeted longer-term refinancing program was introduced to “preserve favorable bank lending conditions”.

The relatively modest size of QE (€20 billion per month, but open-ended), less than what the market was expecting, came on the back of a broad consensus but not unanimity.  Several policymakers, including central bank leaders from Germany, France and the Netherlands, had articulated displeasure over the relaunch of bond purchases.  A more modest program also avoids the challenge of changing rules as to how much of each country’s debt the ECB is allowed to own.

There were other reasons for not firing the monetary policy “bazooka” just yet.  The eurozone economy is in better shape today than it was in early 2015, when the ECB introduced QE.  The service sector remains resilient, with no clear signs of stress.  The labor market continues to tighten, with wages trending up.  Though still low, there are signs inflation is building: the less volatile, business cycle-driven ‘supercore’ inflation measure is trending up.  Furthermore, short- and long-term interest rates are low, driving strong credit growth.

That said, there were enough reasons to act.  Germany is close to a recession, the region’s industrial sector is in a precarious state, the threat of a disorderly Brexit still looms and the prospects for the world economy (particularly China) are dimming amid trade tensions.  A collapse in market-based measures of inflation expectations could bring back the threat of deflation.

There are certainly those who question the effectiveness of additional monetary stimulus.  It will be difficult for the central bank to compensate for restrictive trade policy. With both short- and long-term rates already at historic lows, it is hard to see pushing them lower will help.  And fiscal policy is a constraint.  Draghi emphasized the need “for fiscal policy to take charge,” adding that   “governments with fiscal space should act in timely and effective manner.”  That last statement seemed squarely aimed at Germany. 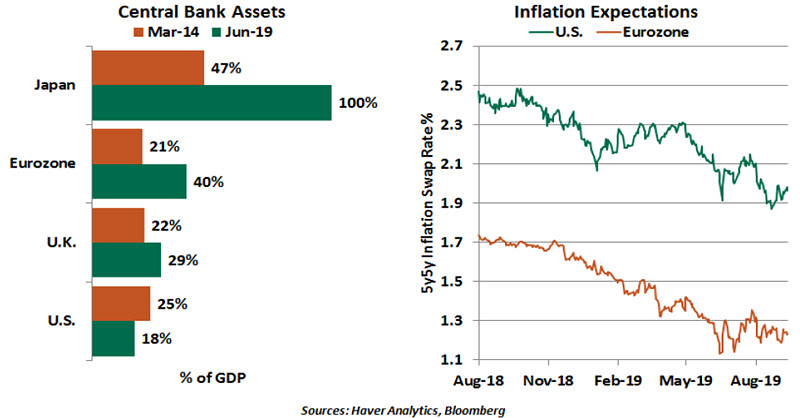 Nonetheless, the “strengthened state dependent forward guidance” used by the ECB this week did move markets.  Interest rates and the euro fell after Thursday’s announcement, as Draghi successfully communicated the intent to remain aggressive for a much longer period of time.  A weaker euro might provide some boost to inflation at the cost of consumer spending, but with other central banks following suit, any benefits would be short-lived.

The implementation of a tiered reserve system allows banks to exempt some of their deposits from negative rates.  A number of institutions continue to offer positive rates to retail savers, on which they are losing money.  The tiering is designed to remove what is essentially a tax on banks, which some have suggested is impairing lending in the eurozone.  The tiering system is likely to benefit banks with large deposits, mainly concentrated in core member nations.

“The ECB’s new forward guidance is dependent on real outcomes, not arbitrary timelines.”

Draghi’s farewell package has paved the way for his successor (Christine Lagarde) to have a smooth start.  Seven years ago, he promised to do whatever it takes; in the years since, he has done everything he could.

The depth and breadth of the collapse in global interest rates has come as a surprise to many observers.  Expectations of central bank easing, falling inflation, and risk aversion have all been proffered as explanations.  But whatever the root causes, American homeowners are grateful for the result.

A report from the Federal Reserve Bank of New York shows that U.S. mortgage debt reached a new all-time high of $9.4 trillion last quarter, the first new peak since 2008.  Happily, the quality of the borrowing outstanding is much better today, with originations heavily weighted toward borrowers with strong credit scores.  And the cost of servicing this debt is very modest.  Fears of another unhealthy mortgage boom are certainly premature.

The vast majority of American mortgage debt carries a fixed rate and offers the borrower the right to refinance these loans without penalty.  (The United States is the only country in the world that allows this.)  Thirty-year fixed mortgage rates have fallen precipitously in the last three months, prompting a corresponding rush to refinance. 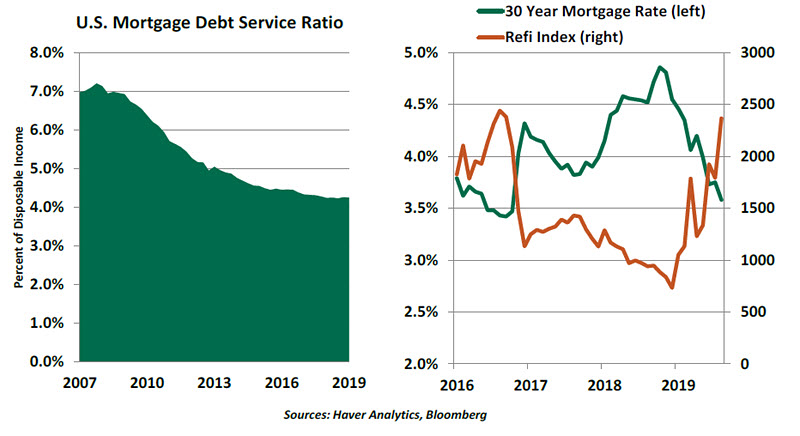 Lower borrowing costs can save households hundreds of dollars each month.  This will provide a boost to spending at a time when the global economy could use some stimulus.  For some families, it will support long-overdue increases in saving.

“The U.S. mortgage market is much healthier than it was ten years ago.”

Not everyone is happy about the resurgence of refinancing.  Banks who made the original loans, and investors who purchased them as part of mortgage-backed securities (MBS), will see a decline in the yields they earn.  They will be forced to find new long-term investments, which will add to already strong demand for bonds.  Some analysts cite this effect as a key contributor to the flattening and inversion of the U.S. yield curve.

This trend may have some room to run.  Mortgage rates have not fallen as quickly as Treasury rates have, and so they may fall even further in the months ahead. If they do, look for more homeowners to take the plunge.