Every morning I am in Chicago, I stop at my favorite coffee shop. The staff knows me so well that they have my usual order ready before I even ask for it.  On those rare occasions where I order something different, the cashier asks me if anything is wrong.

Some days, there is a line of caffeine cravers ahead of me.  During the periodic waits, I recently began to notice a growing crowd of folks going to the far end of the store, where they pluck a cup with their name on it off a rack.  They depart without any interaction with the staff.

Lured by the convenience, I decided to follow the crowd and order my coffee online.  But when I entered the shop and grabbed my morning joe from the rack, the staff gave me a look of surprise and disappointment.  I guiltily realized I was contributing to the disruption of jobs held by people I had come to know.

If the futurists are right, the shoe may soon be on the other foot.  As analytics and artificial intelligence advance, a broad range of jobs will change or fade away.  Digital transformation will be a major economic theme of the coming decade. 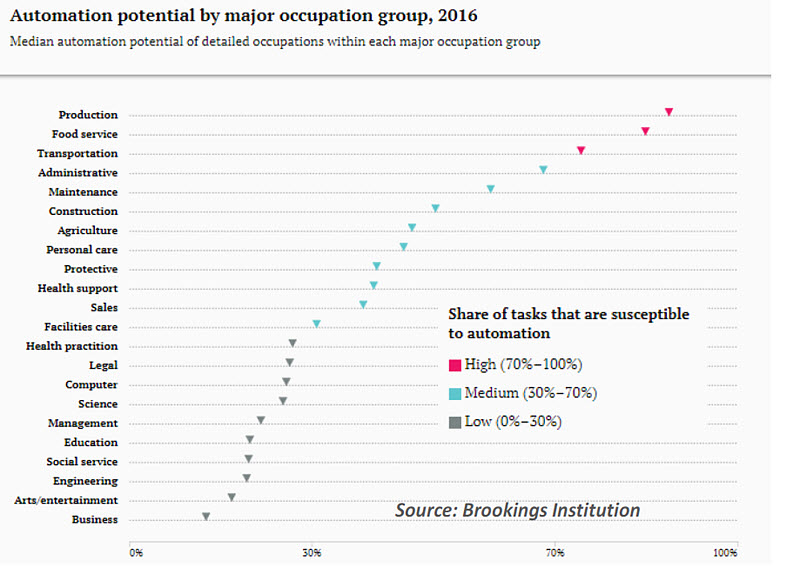 Job transitions are an inevitable product of economic progress.  History tells us that employment and standards of living always increase in the wake of these transitions.  With labor forces growing slowly (if at all) in major economies, technology allowing fewer to do more should be welcomed.  But the next phase of disruption is creating substantial anxiety.

One reason is that cutting-edge technology is threatening service jobs.  We’ve gotten comfortable with the notion of robots in manufacturing plants, but walking into a store without cashiers can be jarring.  (A first encounter with a driverless vehicle is even more unsettling.)   An increasing number of basic news articles are being written by virtual reporters and an increasing number of client service calls are being handled by chat bots.

At the higher end of the skills range, computers are performing functions previously reserved for accountants, actuaries and x-ray technicians, among others.  These professions often require advanced training, which computers are rendering less valuable.  Holders of these roles are coming to appreciate the uncertainty that manufacturing workers have been living with for decades.

Another reason for collective concern is that changes in the nature of work will exaggerate income inequality.  Projections from the McKinsey Institute, which has done important research in this area, suggest automation will have its biggest impact on jobs in the middle of the wage spectrum, creating even more of a barbelled labor market.  Tactile jobs such as home health aides are projected to grow rapidly at one end of the spectrum, while demand for data scientists will be prominent at the other.

If realized, this forecast will further widen the disparity between workers with different levels of education.  Those displaced (in whole or part) will be challenged to upgrade their skills to accept the new opportunities created by the digital revolution; some will make this transition comfortably, and others may not.  As income inequality is a root cause of the global trend toward populism, a growing digital divide could make world politics even more complicated. 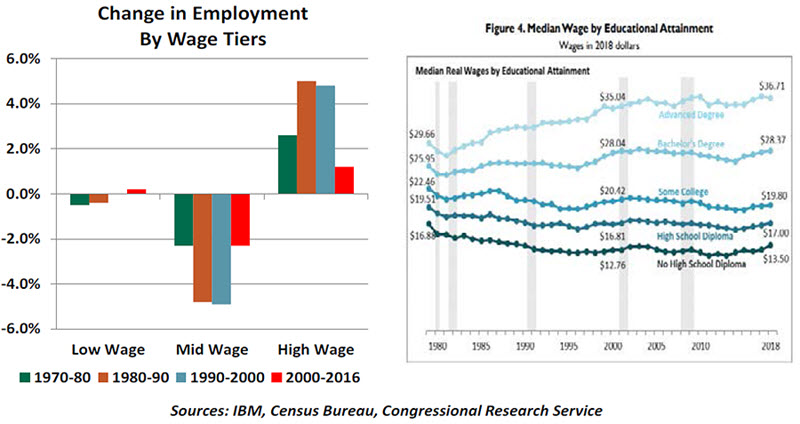 A final reason for trepidation is that the advance of automation is occurring at a greater speed than many expected.  It is front-running the retirement waves that will place a premium on productivity, creating a temporal problem.  Professionals might find themselves threatened in the final decade of their careers, an interval over which many need to earn well to prepare for retirement.

Researchers at IBM performed a broad study of how tasks associated with occupations have changed over time.  In a great majority of cases, automation has taken over specific tasks, without replacing the jobs themselves.  This freed workers in some categories to progress to higher-level endeavors, but it also meant there were fewer positions available.  While IBM expects new products, services and business processes to emerge from digital transformation, the number and type of jobs available in the global economy could be very different in the years ahead.

Realizing the great promise of automation without the downside will require enlightened public policy.  Continuous education will be required to facilitate the transition of employment to higher skill tasks and occupations; governments may be called upon to provide funding or financing to facilitate this progression.  There has already been a great deal of debate over the merits of offering income support to those temporarily or permanently displaced.  One such system, universal basic income, has attracted both support and scorn.

“Life-long learning will be essential to sustaining well-balanced labor markets.”

In most cases, we are excited by the capability technology provides us.  We will never return to buying everything we need in physical stores and getting cash from bank tellers.  But we get rattled when we sense technology may be on the verge of rendering us redundant.  Those kinds of mixed feelings surround examinations of what work will look like in the future.

I learned recently that one of the world’s leading investment banks had created a virtual economist, an avatar capable of proving an overview of conditions and answering basic questions about economic data.  (Think Alexa with a computer-generated face and an economics degree.)  I went to see a demonstration, and I have to confess that it was moderately unnerving.  The first chance I get, I am going to pull the plug on that fellow…

It’s a homeowner’s worst nightmare: The floor is wet, the air is foul, and the pipes are making unfamiliar noises.  Something is stopped up, and professional help is needed.

Overnight interbank money markets experienced a blockage of their own recently, and it took a professional response to clear the system.  Fortunately, the financial pipes are in good condition, and the system does not need extensive repairs.

Last week, demand for cash in U.S. money markets exceeded the supply of funds available to lend, causing a spike in the cost of overnight financing.  The interest rate on overnight borrowing was bid as high as 10%, and the effective federal funds rate settled at 2.3%, outside its target range (at the time) of 2.0%-2.25%.  The news was a surprise, as there were few economic events that could explain the stress.  Corporate tax payments had just been paid, depleting cash balances typically available from money markets, but that occurs every quarter.

The New York Federal Reserve intervened promptly and appropriately, pledging an additional $75 billion in daily capacity to the overnight borrowing market. These temporary open market operations (TOMOs) are standard operating procedure.  In the year 2007, TOMOs were executed on most business days, with average values of about 1.4% of the Fed’s securities portfolio.  The current $75 billion infusion is 2.1% of the Fed’s portfolio, helping to put this large dollar amount in context.

Why did this happen?  Fundamentally, the Fed may have under-estimated the supply of liquidity needed by the short-term funding markets.  For years after the financial crisis, the level of reserves in the system was above the demand banks had for them.  The excess could therefore be bought and sold on a daily basis, and overnight rates tracked closely with what the Fed desired.

As the economy recovered, the Fed reduced its balance sheet.  From its peak of $4.5 trillion, the Fed gradually lowered its holdings to a level of about $3.8 trillion in July.  The Fed committed to maintaining “ample reserves” in the financial sector, but did not know with precision what that reserve level should be.

Bank liquidity requirements were rewritten after the financial crisis to minimize the risk of another bailout of the financial system.  Banks today operate with much higher levels of liquid assets (including cash, investment securities and reserves held with the Fed).  The new rules limit the amount of funding that banks have to sell to one another in the Federal funds market. 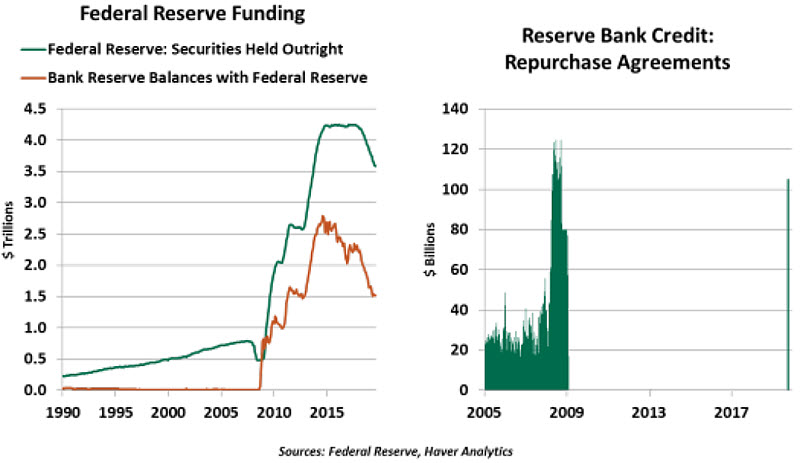 For more than a year, the Fed has struggled to steer overnight interest rates within their targeted band.  Last week’s events were extreme examples of a more general reserve management problem.  In the short term, daily offerings will calm conditions.  We expect the Fed will continue to act as needed to support the overnight lending market.  The Fed may create a permanent repo facility to keep the system flush with cash and clearly signal its willingness to support markets.

“The Fed’s balance sheet will need to resume growth once again.”

But over the longer term, the Fed’s balance sheet will need to grow steadily. We expect this will be on the agenda for the October 29-30 meeting of the Federal Open Market Committee.  Some have suggested that a renewed round of quantitative easing (QE) is in order, but these circumstances are different.  QE maintained liquidity and held down yields amid rampant uncertainty.  But the balance sheet can and should grow naturally, unrelated to any crisis.  In the chart above, we see the Fed’s holdings trebled from $225 billion in 1990 to over $790 billion before the financial crisis in 2007.  This growth was the natural outcome of steady economic growth and inflation.  Analysts are estimating growth by as much as $250 billion should restore equilibrium.

Fed intervention in markets conjures memories of the financial crisis.  Observers will be forgiven for feeling tension amid last week’s uncertainty.  Upon review, this was a routine action that was quite normal before the crisis, but hadn’t been needed since 2008.

The recent episode will pass just like any other plumbing problem. The system works well and is rarely given a second thought, but when there is a problem, it demands fast action.

After a four-year delay, Japan will raise the consumption tax on most purchases of goods and services from 8% to 10% on October 1.  While needed to make modest progress toward budget balance, ease the world’s biggest debt and strengthen the social security net, the tax increase carries the risk of triggering a recession, as it has on two occasions in the past 20 years.

To mitigate adverse effects, Japanese policymakers have been cautious in their implementation: 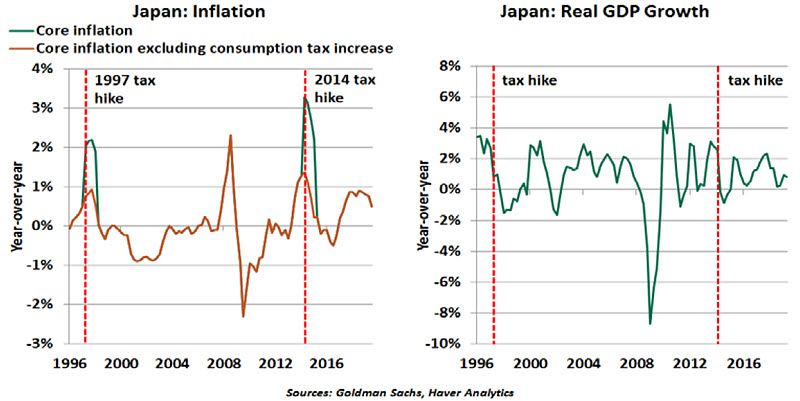 Prior to the 2014 hike, consumption rose notably, particularly purchases of durable goods.  Back then, consumers front-loaded their demand in anticipation of the second round increase to 10% (originally scheduled for 2015).  The consumption drought that followed was one reason for the recession.  Recent consumption data hasn’t shown much front-loading of purchases, suggesting the risk of a downturn this time around is moderate.

“The consumption tax hike will have a moderate effect on the Japanese economy.”

In sum, the upcoming hike will likely dampen growth but not lead to a recession.  More importantly, this will only be a minor step towards addressing Japan’s tattered fiscal health and huge public debt.  A more decisive act is needed, perhaps at a more opportune time.