People want jobs. Elected officials want what is best for their districts. Employers want to lower their costs. These are all good intentions, but aligning them can be difficult. Amazon and New York City recently learned this lesson the hard way.

People want jobs. Elected officials want what is best for their districts. Employers want to lower their costs. These are all good intentions, but aligning them can be difficult. Amazon and New York City recently learned this lesson the hard way.

Governments around the world use economic development incentives to encourage new investment. Internationally, Ireland has been a leading applicant of this strategy; within the United States, incentives are frequently employed at the state and local levels. The inducements offered can include reduced taxes, subsidized or no-cost lending, provision of land, building new infrastructure, and exemptions to zoning or environmental requirements.

The incentives make intuitive sense. The locality gets new jobs, both directly from the employer’s investment and indirectly as new shops are opened to support the new residents. Employers improve their profits, though the cost reduction of local grants.

On a small scale, economic opportunity zones and tax-increment financing districts help direct new investment to areas with the most need, and have proven effective in attracting entrepreneurs. Because the success stories are small and local, from salons to brewpubs to boutiques, they rarely receive national attention.

As they grow larger, incentive programs become risky. Major projects compete across regions to find better deals. The more jobs that are promised, the greater the temptation is to boost incentives. These competitions become a race to the bottom, with ever-larger offers straining return-on-investment calculations. Successful bidders often suffer a winner’s curse: The entity that paid most generously has probably overpaid. 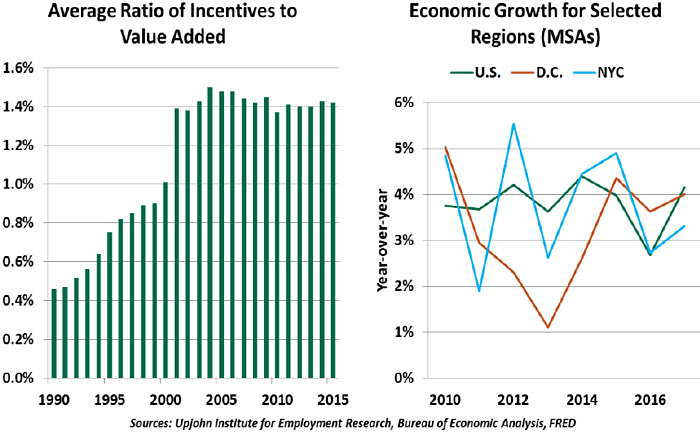 This is what the residents of New York City became concerned about. Amazon conducted a broad search for its second headquarters, expanding beyond its native Seattle. More than 200 cities and regions submitted proposals, confidentially including incentive offers. Amazon split its decision, choosing two winners: New York and Arlington, Virginia.

The celebration in Gotham was short-lived. Opposition began mounting almost immediately after the decision was announced. Congestion was one issue: New York has little open space for large-scale developments. Long Island City, the neighborhood that would have hosted Amazon, suffers from full trains and full sewers. Labor leaders organized protests against the company over its alleged mistreatment of workers. Critics were also outraged at the offer of $3 billion in incentives to a company that earned $11.2 billion last year (and reportedly paid no income tax on that sum).

Further, growth has other costs. As more jobs are created, communities will need to plat new housing tracts, expand infrastructure and staff new schools. While every new job has a multiplier effect — new residents need grocery stores, restaurants and household services, which generate sales taxes — the risk is that some of the costs of growth will not be covered and that public budgets will be worse off.

The risk of excess is playing out in Foxconn’s facility in southeastern Wisconsin. The region offered a total of $4 billion in incentives for a factory that promised 13,000 manufacturing jobs, a cost of more than $300,000 per job. Now, Foxconn is hedging its local development outlook. Wisconsin’s hope spurring a new cluster of technology employers remains an aspiration.

Incentives rarely pay off, but communities continue to offer them.

On this topic, economic consensus is clear: Economic development initiatives rarely pay off. They are characterized as an “ enduring scam,” “ worse than useless,” and a “ drag on the nation.” Even past grants to build Amazon warehouses failed to improve local employment.

For its part, Amazon did not weigh proposals solely by incentive values. Other cities presented a bevy of generous offers. The Virginia bid contained a relatively low $550 million in job-creation grants, plus an additional pledge of $1 billion to support local education. This illustrates that incentives are helpful, but not sufficient; employers are attracted to regions that offer the right mix of affordability, physical capacity, labor and infrastructure. 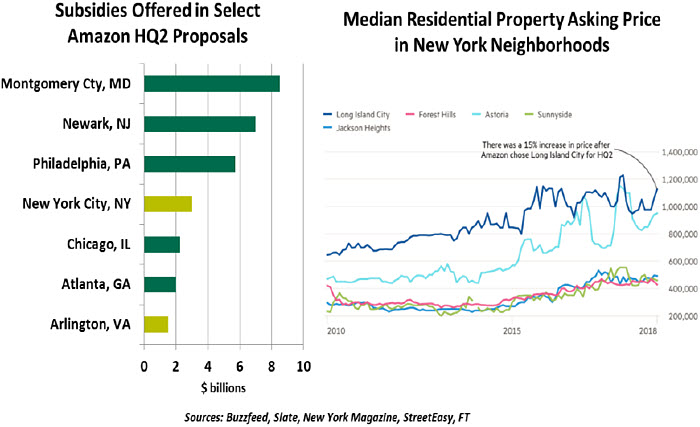 In the face of the growing public outcry, Amazon surprisingly withdrew its commitment to New York. The company will move on without much fuss: even without a second headquarters, Amazon has offices in 17 U.S. cities, all of which would welcome new jobs that were meant for New York.

For Long Island City, the cancellation should not be cause for cheer. Having lost the chance to attract a major corporate name, local officials will now be pressed to describe how they intend to generate the kind of economic activity that Amazon had promised to provide. The promises of redeveloping dated industrial areas in New York’s bid to Amazon were compelling, but this episode may stop other potential employers from considering expansion into any of the five boroughs. While some observers may have been uncomfortable with the appearance that the rich were getting richer, Amazon’s departure may leave the poor poorer.

Hostility to capital drives it elsewhere.

A city that clings to a principle of never offering grants may risk losing incremental business to its neighbors. Legislators are working to address this risk, with several states considering a pact to stop competing for employers. But such a truce would continue the prisoner’s dilemma, as defectors would be rewarded, and states that don’t sign would continue to attract new investments.

The Amazon situation illustrates the difficulty that arises when trying to balance growing the economy and ensuring that growth is equitably shared. Worrying about slicing the pie before it is fully baked can lead to the cancellation of dessert.

This is a conundrum that will be faced by Congress, as reformers seek to change the terms of fiscal debate. As New Yorkers learned, getting the ingredients right and keeping the debate at the proper temperature will not be easy to do.

Last weekend, President Trump announced his decision to delay tariff increases (from 10% to 25%) on $200 billion of Chinese goods that were scheduled to come into effect starting today. The move came amid optimism that the sides would eventually reach a deal; the U.S. administration is of the view that “substantial progress” has been made “on important structural issues including intellectual property protection, technology transfer, agriculture, services, currency, and many other issues.” Chinese equity markets rallied powerfully on the news.

This is welcome progress toward de-escalation of trade tensions, but some tension remains. Existing tariffs will stay in place at least until a trade agreement is reached between the two sides, and they are introducing discomfort for both countries. Among the many open issues, further discussions will be required to address the Chinese government’s subsidies to domestic industries, a central tenet of the Chinese Communist Party’s platform.

As of now, there is no clarity as to which side has offered more concessions and in what areas. Preliminary reports speculate that China has agreed to buy significant amounts of U.S. goods: up to $1.2 trillion of agricultural products, energy and semiconductors. China is also expected to reduce non-tariff trade barriers, providing greater market access to U.S. firms in financial services and auto manufacturing, improve protection of intellectual property rights and reduce forced technology transfers.

China’s economy has hit a soft patch amid internal imbalances and is also feeling the pinch of tariffs. These circumstances have made it a willing bargainer. At the same time, the U.S. administration appears to have softened some of its key demands and is not pushing Beijing to fundamentally restructure its methods. Washington’s negotiating strategy seems intent on deferring some of the harder-to-solve issues, which may need to be addressed separately.

Chief among these will be striking a balance between China’s aspiration to technological dominance and America’s resolve to remain the world’s leading technological power. The U.S. pushback on Huawei and China’s counter-accusations are preliminary skirmishes in a brewing tech war. American attempts to get allies to join the offensive against Chinese telecommunications makers have lost momentum and may be a key reason why the tech sector has moved to a back burner in the negotiations.

The more moderate U.S. stance, which may be driven by politics more than economics, has angered hard-liners in the administration. A compromise from the U.S. side on core issues will make the passage of any future agreement difficult in Congress, which will be wary of a weak deal that fails to provide a transparent and level playing field for U.S. businesses. And there remains a strong appetite on both sides of the aisle to combat what is perceived as China’s economic and diplomatic aggression.

Even if a limited accord is agreed, defining the enforcement mechanisms, a crucial point for the U.S. in guaranteeing China’s compliance with any future deal, will also be a complex task. This could also require additional time and care.

A fairly limited deal covering the less prickly elements is highly possible as the two sides have come closer to finding a common ground on simpler issues. But tensions related to China’s industrial practices, technology and its rise as a global power are unlikely to recede. While markets have been cheered by signs of détente, important battles still lie ahead.

The Federal Reserve is once again contemplating changes to its system for targeting inflation. Officials are frustrated at their inability to reach the current objective, and worried that inflation expectations may fall as a consequence. With interest rates settling in at much lower levels than they have during past expansions, there is less “dry powder” to arrest a decline in the price level, which raises the specter of deflation during the next downturn.

The Fed has initiated a series of discussions to consider its options. As we concluded in our essay “A Testing Time for Inflation Targeting,” it is unlikely that the Fed would discard 2% as its objective, having invested considerably to embed that figure in the minds of the markets.

But the Fed could elect to seek that target on average over some period instead of at every point in time. Under this kind of system, underages in one interval would be made up for by overages in another. Price level targeting is one example of this kind of framework.

Committing to this process would, in theory, raise inflation expectations during periods where actual inflation was below the long-run target. Investors would, in those cases, expect the Fed to remain easier for longer than they would under the present structure.

We would advise the Fed to proceed with caution. First, inflation expectations do not seem to have stepped down meaningfully; as shown in the chart below, market-based measures of expectations are closely anchored to oil prices, which have recovered from last fall’s decline. Second, the Fed might have a hard time committing credibly to getting inflation above 2% when called for, given its recent struggles to reach that level.

Finally, a move to average inflation targeting or price level targeting would suggest lower interest rates across the business cycle (or even an interest rate cut in the current environment). This could invite financial excess, which could beget financial instability without confident financial supervision. Nonetheless, the Fed’s willingness to move in a new direction is another clear sign that the odds of an interest rate hike this year are falling.