In a socialist system, you start with two cows; the state takes one of them and gives it to your neighbor.

In a communist system, you start with two cows; the state takes them both and gives you some of the milk they produce.

The past generation has seen a pronounced drift away from the latter two models. Forty years ago, Deng Xiaoping began an economic liberalization in China that laid the foundation for the country’s emergence as a global power. Thirty years ago, the Berlin Wall was opened to passage, signaling the failure of the European communist bloc. The subsequent ascent of global capitalism has been evident in the trade and market liberalization that has created substantial wealth across countries.

In spite of these achievements, we are hearing more about socialism these days. Candidates across the globe are espousing principles that had fallen into disrepute, and finding broadening support. As this movement gathers steam, we should pause to consider what socialism is (and isn’t), why it has gotten traction recently, and the implications for the global economy. 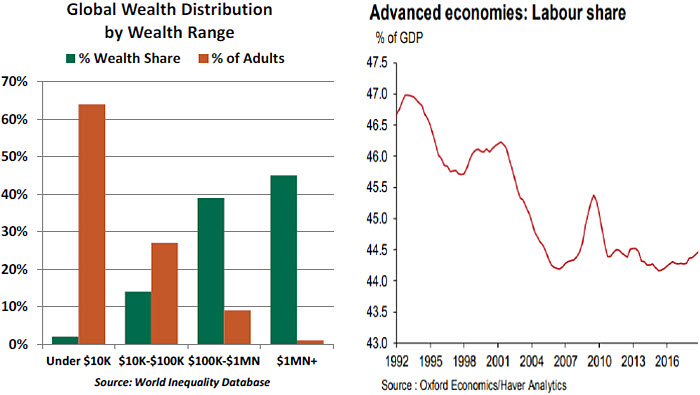 The current expansion, nearing its tenth birthday, is remarkable for its humble beginnings. At the depth of the financial crisis, it wasn’t clear whether normal economic function could be restored. The world’s central banks turned the tide with innovative, creative policies.

The resulting turnaround was tremendous. Global gross domestic product (GDP) grew by 34% since 2009, and global equity markets are now 185% higher. But outcomes have been uneven within and across countries. The gap has expanded between those who have done well and those who haven’t.

National income is divided between corporations and workers. After recessions, the proportion of “profit share” for companies typically rises as firms hold down costs to make up for lean times; as time passes, the “wage share” normally recovers.

That has not been the case during this cycle. Wages have moved ahead very slowly, despite low levels of unemployment. Furthermore, those below the upper quintiles have not benefitted much from the performance of the stock markets. And some communities have endured significant economic displacement as globalization and automation take deeper root.

These factors have created a groundswell of discontent that has become a powerful political force. The initial targets of the movement have been trade and immigration, which have both been curtailed over the past several years. The evidence suggests these steps do more harm than good to an economy and its workers. But viscerally, the appeal of closing borders has increased.

All countries are socialist, to varying degrees.

Some want to take the effort further. They see the current system as tilted and in need of leveling. Proposals to expand social benefits and pay for them with higher taxes are on the table in a number of countries. These efforts have been branded by some as progressive and by others as “the new socialism.”

To be sure, some socialism is already embedded in even the most capitalist of systems. Most countries have public schools, public assistance and at least some public health care. (You may be surprised to learn that Medicare and Medicaid now serve 40% of the United States population.) Countries differ not on whether government is active in the economy, but the degree to which the public sector is involved. 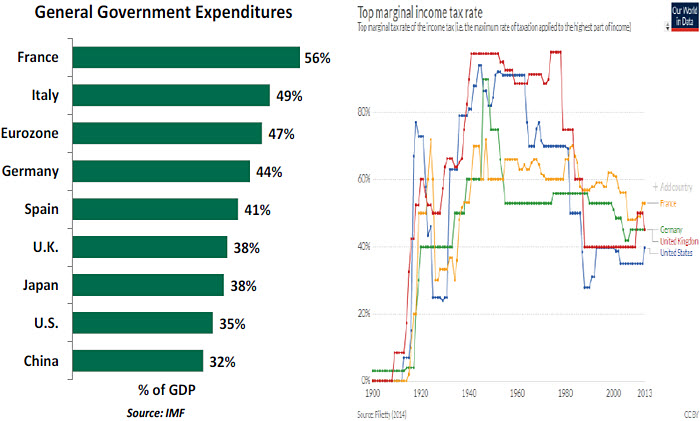 In many countries, there are calls to expand social supports. Increased subsidies for education, more public health care and improved worker benefits have all been proposed. These would be financed with higher tax rates, which have generally been falling over the last 40 years.

Defenders of the current regime observe that lower taxes have provided incentives for economies to grow, which benefits everyone. They claim that changing those incentives would result in less innovation, fewer small business formations and capital flight. From this perspective, it is better to focus on baking the pie, not slicing the pie.

With some intelligent and selective investments in education and infrastructure, markets can be a vehicle for increased economic opportunity. Unfortunately, strained public budgets in most of the world have made these strategies difficult to pursue.

We ignore progressive voices at our own peril.

Progressives claim that many are getting crumbs while a few are gorging. When these extremes have arisen in the past, political and social stress has often followed. The excesses of the Gilded Age at the beginning of the 20th century led to stricter labor laws, trust busting, and (in some countries) regime change.

It would be a stretch to say revolution is in the air. Workers of the world are not united; in fact, the decline of unions has been cited as a contributor to the recent skewing of economic outcomes. And while progressive voices are rising, they are not yet close to a majority.

Nonetheless, those voices will make it more difficult for parties on the right, on the left, and in the center to come up with cohesive platforms that satisfy all constituents. And in some cases, like Amazon’s retreat from New York, they can win the day.

Until policy produces the promise of additional economic equity, progressives will continue to advance. And that’s no bull.

Neither Modern nor Monetary

Many of today’s Disney fans watch the television series Mickey Mouse Clubhouse. The characters are aided by a floating toolbox named Toodles, who carries “Mouse-ke-Tools” to solve problems. At each episode’s end, Toodles reveals a “Mystery Mouse-ke-Tool” that provides crucial help to save the day.

MMT’s fundamental premise is that an economy issuing debt in its own currency has few limits on its capacity to borrow. The country’s central bank can always create more currency to purchase government bonds and pay interest. Government spending would be nearly unconstrained.

An MMT-oriented economy would fundamentally alter the role of its central bank. Today, central banks set monetary policy by steering interest rates, with the goals of managing inflation and maximizing employment. Under MMT, the legislature would take on these goals using its existing powers of spending and taxation, with the central bank serving only to issue currency and purchase bonds. Costly programs like a jobs guarantee would become affordable under MMT and defensible by moving the employment mandate to the legislature.

The appeal is obvious. Removing the question of funding would allow politicians to implement popular but expensive ideas. And the intuition is supported by recent experience. Over the past 50 years, the United States has rarely balanced its budget, thriving despite continual increases in the national debt. Meanwhile, the fear that printing money causes inflation is contradicted by the muted inflation witnessed in the U.S. and Europe after quantitative easing.

But the risks are high. Any rapid increase to the money supply runs the risk of sparking an inflation wildfire. Critics point to obvious examples of countries sealing their fates by printing money in a crisis: Weimar Germany, Zimbabwe, Venezuela. But these countries did not have reserve currencies and are poor analogues to today’s developed economies.

If MMT does not work as theorized, the consequences would be drastic.

Experimenting with MMT would permanently alter a country’s fiscal position. As it stands, debt-to-GDP ratios around the world are setting peacetime record highs. A run-up would lead to a level of debt that could never be paid down. In an MMT world, that is fine; the public debt adds to a private surplus. However, should confidence in a reserve currency falter, inflation and default would be inevitable. An intervention such as the IMF’s support of the U.K. in 1976 would be unaffordable. Such a large restructuring would destabilize an entire economy. To little surprise, today’s Fed governors and economic advisers reject the premises of MMT. 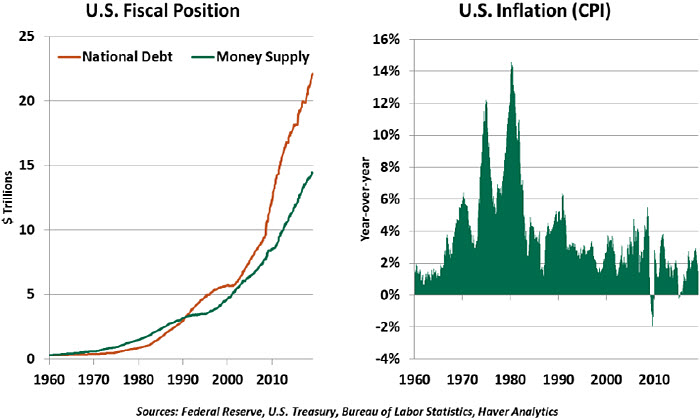 Despite its name, MMT is not modern. It is the latest iteration of the idea of monetizing the debt, relying on a central bank to create demand for a country’s bonds. The Bank of Japan routinely buys all Japanese government bonds on the open market, keeping borrowing costs near zero despite a massive government debt. Japan has not imploded under this debt burden, but it has stagnated. Government intervention reduced a crisis, but did not unlock growth.

On a practical level, the MMT debate is more political than economic. MMT will be restrained by popular support for independent central banking and disciplined spending. We view the discourse as an illustration of the more permissive attitude that policymakers have taken toward deficits and inflation. It may also presage what economic strategy might look like during the next downturn.

As shown in the discussion of the Green New Deal, policy debates have turned away from what we can afford and toward what we should seek to accomplish. But there is no magic tool that allows us to spend without cease. Not even the Sorcerer’s Apprentice can do that.

While income and wealth inequality are on the rise worldwide, significant progress toward reducing poverty has been made over the past few decades. Globalization has helped, bringing work and incomes to developing countries. Though this is laudable, there is much work left to be done.

Estimates from the World Bank find that poverty has declined from 36% of the world population, or 1.85 billion people, in 1990 to 10% (736 million) in 2015. Rapidly-growing China, home to 1.4 billion people, has experienced the greatest poverty reduction over the past 25 years. That said, the pace of the global decline has slowed, and poverty eradication remains a key challenge for some regions, particularly sub-Saharan Africa and South Asia.

Extreme poverty is still uncomfortably high in some emerging economies.

More than half (over 400 million) of the extreme poor are in sub-Saharan Africa alone. The Middle East and North Africa are the only major world regions where the poverty rate has risen since 2013, a period of stubbornly low oil prices. Despite being among the world’s fastest-growing economies, a few major emerging markets such as India and South Africa are still reeling with distressingly high poverty rates, 21% (273 million people) and 19%, respectively. In India, national poverty reduction programs have been largely aimed at making the conditions of poverty easier rather than fostering human capital to move out of poverty. 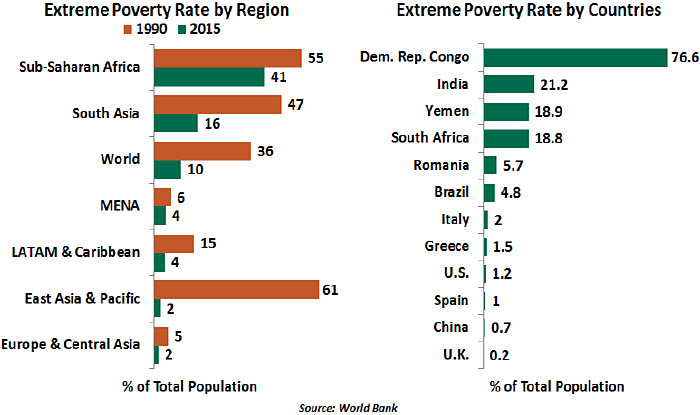 The recipe to fight poverty not only entails a high growth rate but also a sustainable and inclusive model of development, led by increased participation from private sector. Expansion of education and social security nets along with investment in prevention systems (against shocks like pandemics, natural disasters, conflicts and financial crisis) are equally important measures.

Much work remains to achieve the World Bank’s target of no more than 3% of the global populace living below the defined threshold by the year 2030. And the poverty line, defined at $1.90 per person per day (at 2011 purchasing power parity), is a low bar. The fight against poverty has yet to reach a logical conclusion. We should be glad for the progress that has been made, but we should also remain hungry for more.