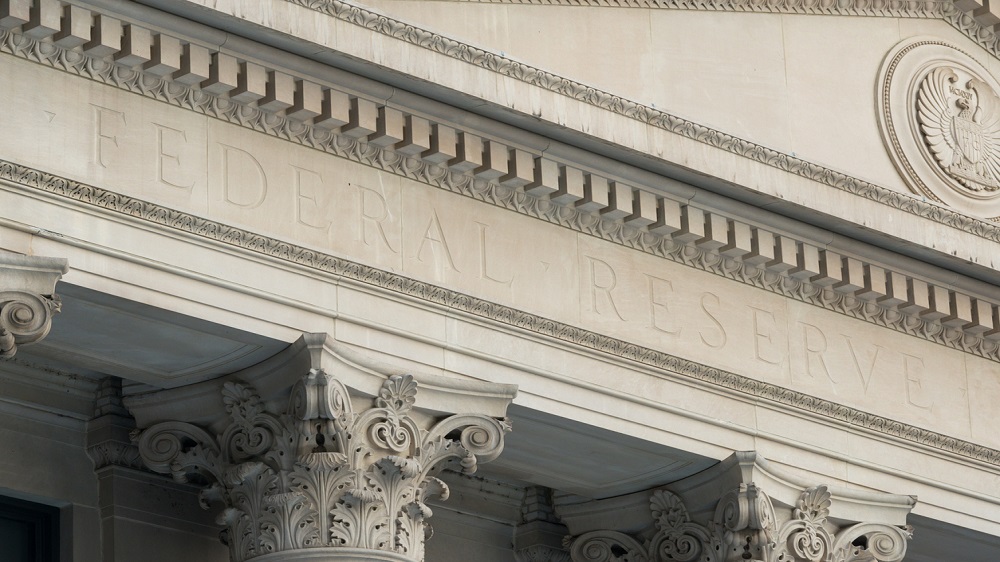 There aren’t many diversions available in this time of the Coronavirus. Theaters are closed, sporting events have been cancelled, and “dinner out” is eating take-away food in the parking lot of your favorite restaurant. In my house, we’re tired of crossword puzzles, Netflix-binging, and board games.

So, my wife has decided that tackling the home-repair backlog would be an ideal way to fill the few hours each day that I am not working or sleeping. First on the list: Installing a new kitchen faucet. This is not an easy thing to do: the fittings are hidden behind a rigid superstructure that requires considerable effort to work around. There goes my back…again.

The sink is so difficult to dislodge that the logic of the phrase “throwing everything but the kitchen sink” seems particularly clear. But I suspect the plumbers at the U.S. Federal Reserve are checking the fittings so they can add the sink to the other appliances they have used to address the advancing recession.

After reducing interest rates to zero in 2008, the Fed had to rely upon “unconventional” monetary policy. New to the toolkit was “quantitative easing” (QE), under which they began to purchase Treasurys and mortgage-backed securities. This provided credit directly to the U.S. government (which was spending additional money to fight the recession) and to mortgage markets that had been impaired by the housing crash. The Fed took very little credit risk, and while it did provide some specific support to the real estate sector, it generally avoided accusations of favoring some industries over others.

The Fed also initiated a range of programs to address problems in specific segments of the financial markets, and offered direct aid to a handful of institutions whose failure could have caused extensive damage to the financial system. Those efforts have generally been hailed as a success; they generated immense returns for American taxpayers and paved the way for an eleven-year economic expansion.

Yet there are critics of the Fed’s work during the global financial crisis. Legislation enacted in the years that followed made it more difficult for the Fed to act unilaterally. As a result, the unfolding of the current crisis spurred concerns over the Fed’s ability to respond. In retrospect, those fears look incredibly foolish; American monetary policy has moved with speed and scale that make the actions of 2008 pale in comparison.

Today’s policy makers have been able leverage the pioneering actions of eleven years ago. They brought interest rates back to zero in two large cuts executed in less than two weeks, both without a formal meeting. They resumed quantitative easing without the program limits that had been used in 2008. (Some are terming the current effort “QE forever.”) And they resurrected programs that were successful back then, like the Commercial Paper Funding Facility (CPFF) and the Term Asset-Backed Securities Loan Facility (TALF). 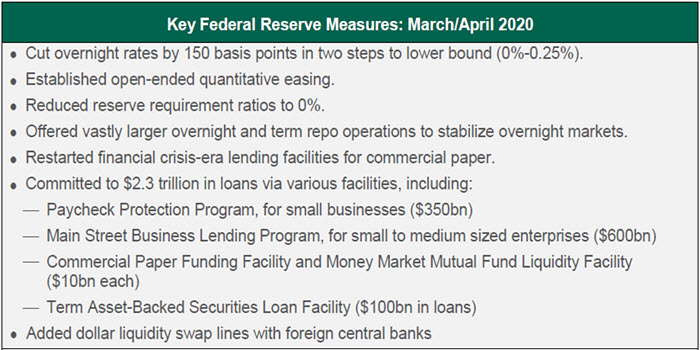 The Fed was quick to accelerate its purchases of Treasury debt, buying $1.1 trillion over a four-week period. Purists will certainly feel uneasy at the appearance of a central bank financing government spending, as it might appear to compromise central bank independence. The injection of substantial volumes of reserves into the system has raised concerns of inflation, but the sudden economic stop has made deflation the bigger near-term risk. In the current environment, there really is no alternative to closely coordinated monetary and fiscal policy.

The monetary effort is also pressing into new areas. Programs targeted to aid large and small corporations, state and local governments and commercial real estate were initiated last week. Using seed capital from the U.S. Treasury, the Fed will have the ability to purchase a wide range of loans and debt securities to ensure orderly markets and a free flow of credit. In total, these efforts could amount to more than $2 trillion.

The mere announcement of these programs improved market conditions before the first asset was even purchased. In some sense, the Fed’s willingness to purchase may reduce the need for it to ever do so. The insurance it is providing may reduce the potential for claims.

But it is likely that the Fed’s holdings will become more diverse, and more risky. And in selecting some securities to buy or backstop, they will be putting others aside. The Fed will need to avoid putting a floor under any and all asset prices, which could encourage reckless behavior on the part of investors. The communication, accounting and auditing surrounding the program will need to be at a high level.

“By necessity, fiscal and monetary policies are being closely coordinated.”

In 2008, Fed Chairman Ben Bernanke famously said, “There are no atheists in foxholes, or ideologues in a financial crisis.” While there are good questions to be asked and answered about what the Fed is doing, they should be saved for another day—preferably a day when the coronavirus crisis is far in the past. Until then, the Fed must supply lots of liquidity to the financial system. And that is why they might pull the kitchen sink out of the wall.

For those of us working from home, atrophy is setting in.   When the day comes to return to our workplaces, certain skills may take a moment to refresh: Packing a lunch, tying a tie, reading a train schedule. But these concerns are trivial compared to the worries of those who have lost their jobs.

An unprecedented decline in demand is striking worldwide. In short order, severe job losses have taken root. In this situation, workers look to the government for aid to survive the crisis. We are watching two different approaches play out: Paying employers to maintain jobs, and paying workers to support them through a gap in employment.

Under the former approach, governments can subsidize employers who maintain payrolls. This system is called work-sharing, short-time compensation, or Kurzarbeit. This German phrase for “shortened work” became popular after Germany used this innovative program to navigate the 2008 recession. Employers facing a need to cut labor costs can appeal for government relief. The government then allows the employer to reduce workers’ hours and pay, and provides a subsidy to make the workers whole. Rather than an employer firing 20% of its staff, each employee would move from five to four days of work; the Kurzarbeit subsidy would pay the workers for their lost fifth day of wages. The system allows workers to keep their skills sharp and precludes the massive personal disruption of job losses, while making it easy for the employer to ramp up hours once demand returns.

The Kurzarbeit approach has taken off in western Europe. Across France, Spain and Germany, over 10 million applications for short-time compensation have been submitted. The system is well-suited to these countries due to their labor protection laws and unionized workforces. Layoffs are more difficult in their systems, and any measures to maintain employment are preferred.

Employment is less protected elsewhere in the world. In the U.S., layoffs have been rapid and unrelenting. This is typical of economic cycles: Workers are let go when the economy slows and rehired once demand returns. Under these conditions, the role of temporary support through unemployment insurance (UI) is vital. The CARES Act included generous provisions to bolster UI payments for temporarily displaced workers. But such measures are expensive and risk creating a disincentive to returning to work.

The U.S. has rapidly launched policy responses to help employers weather the storm, as many entered the downturn with limited capacity to survive a disruption. Kurzarbeit-style support for employers was not the country’s standard practice, but the idea is starting to spread. The CARES Act offers additional support to states to offset their costs of work-sharing. However, at present, only 26 states have programs in place. We would welcome an expansion of these programs, but it would come too late for today’s stretched employers. 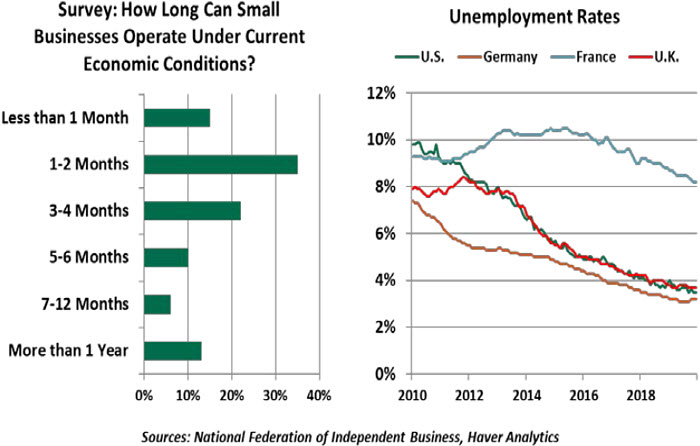 In addition, the oversubscribed Paycheck Protection Program (PPP) offers loan forgiveness of up to eight weeks of payroll for employers who maintain headcount. Crucially, there are two measurement points in PPP: February 15, 2020, and eight weeks after the business receives a PPP loan (a rolling deadline, starting June 2 for the earliest applicants). PPP borrowers need to maintain their February 15 headcount, but prior to PPP’s formation, many employers cut payrolls. If workers are rehired in the next two months, employers will still qualify for loan forgiveness. The volume of UI claims has been staggering, but this PPP provision gives us some hope that many workers will have only a short visit to the unemployment line.

The costs of not working are substantial. First, workers’ skills get rusty, which may make it more difficult for them to get re-hired. Household budgets suffer, in the worst cases leading to lasting disruptions like evictions, foreclosures and bankruptcies. Policy responses to help workers weather unemployment are well-intended. But support to keep employers alive and keep workers employed will do much greater good – and will help us remember how to catch our trains on time.

The Australian economy is well-known for its resilience. Its record expansion has lasted through multiple crises, including the Asian financial crisis, the dot com bubble, and the 2008-09 financial crisis. But this time, it’s going to be different. The COVID-19 pandemic is likely to deliver a blow to the Australian economy, bringing an end to its 29-year-long economic boom.

Australia’s economic resilience has been underpinned by a good mix of services, agriculture and mining sectors (plentiful natural resources). Openness to the world has been a key contributor. While trade, tourism and investment have played a vital role in the country’s growth story, population growth led by a welcoming immigration policy has supported consumption and demand.

Australian policymakers have responded aggressively to the challenges the country is facing. Federal and state governments in Australia have combined to launch stimulus packages worth over 11% of gross domestic product (GDP). The Reserve Bank of Australia (RBA) joined other major central banks in formulating a strong monetary policy response, including cutting its official cash rate to the lower bound of 0.25%, an unprecedented quantitative easing program ($36 billion of government bond purchases, equivalent to 1.8% of GDP), and yield targeting for three-year bonds. The RBA has also established a term funding facility of at least $50 billion for the banking system, with credit support to small- and medium-sized businesses.

Those measures will be counted on to combat the magnitude of the looming crisis. A survey of Australian business conditions experienced the largest monthly fall on record in March, to its lowest level since the early 1990s. Credit markets are under stress amid investor exodus, and massive job losses are expected. 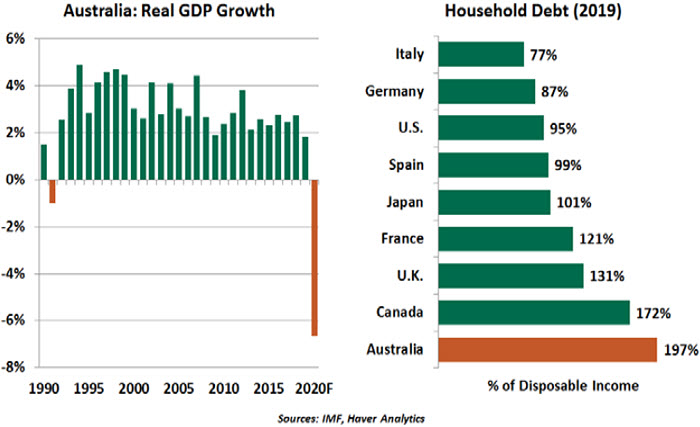 Australia’s households are the most indebted of all G20 nations. Income losses will only make consumers more vulnerable to housing market corrections. Reduced asset quality will likely hurt banking profitability. Reliance on exports (including commodities) amid plummeting external demand is another area of concern. China and Japan combine to account for more than half of Australian goods exports, and both are facing a difficult year ahead.

Australia has some buffers to soften the blow. The country has a relatively strong fiscal position. The banking sector is well capitalized and policy support (like mortgage holidays) should help avoid a sharp surge in delinquencies.

With its prolonged growth cycle, many Australians have no firsthand experience of economic hardship. The next year will be difficult, but the country’s inherent strengths and a strong policy response should make Australia one of the first markets to recover.