Yellen is a good candidate for a tough job, and we review the outlooks for U.S. holiday spending and trade in Asia. 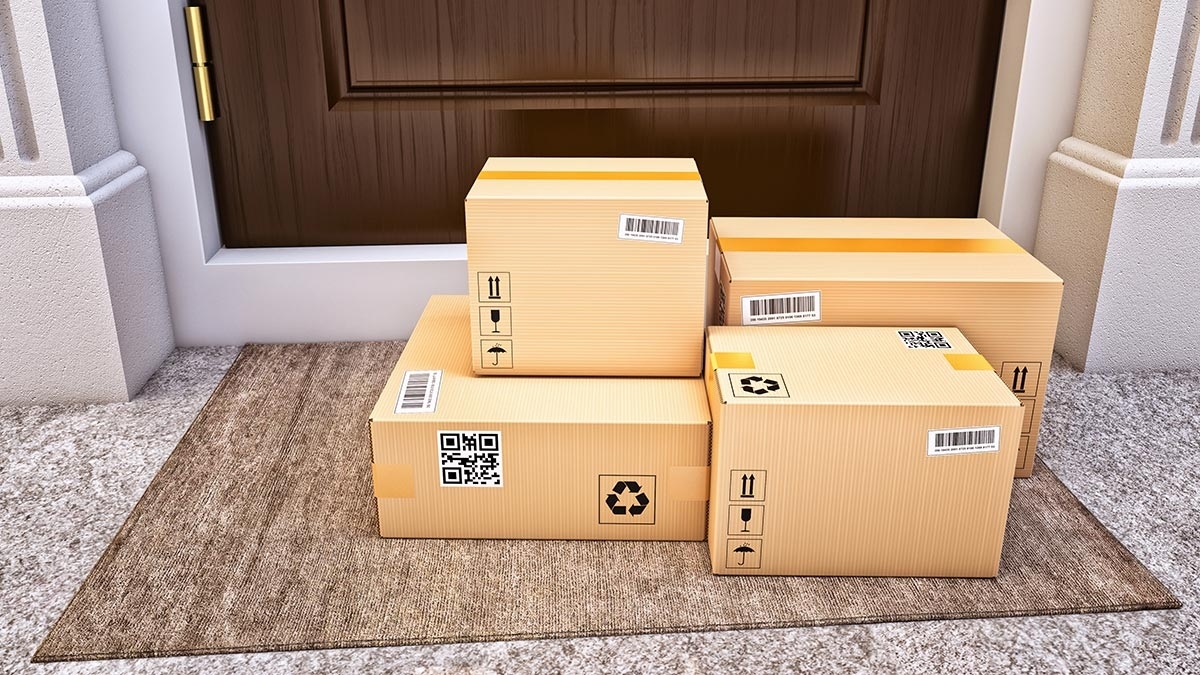 Many Americans know who the first secretary of the U.S. Treasury was.  Alexander Hamilton’s picture has adorned the 10 dollar bill since 1928, and his life and work were recently celebrated in an award-winning musical bearing his name.

But most Americans would be hard-pressed to name even one of Hamilton’s successors.  The Treasury secretary does not have the visibility of some other cabinet officers, as the department’s workings are sometimes more operational than strategic.  (Pressed to name a Treasury function, most would first identify printing money.)

Janet Yellen, whom President-elect Joe Biden has nominated to become the next Secretary of the Treasury, may rise above the relative anonymity of her predecessors.  Not just because she would be the first woman to serve in the role (although that is a notable milestone) or a former Fed Chair.  The policies she sets will raise the profile of the department and have an important bearing on our country and on the financial markets.

There aren’t many people anywhere with Janet Yellen’s experience.  She served in senior positions within the Federal Reserve for seventeen years, and as Chair of the White House Council of Economic Advisers in the Clinton Administration.  She has been a leader within the economics profession for five decades.

Nonetheless, the Treasury job will test her experience and her leadership.  The department employs more than 87,000 people, and has an annual budget of $20 billion. Assuming she is confirmed, a range of pressing challenges awaits her.  Among them: 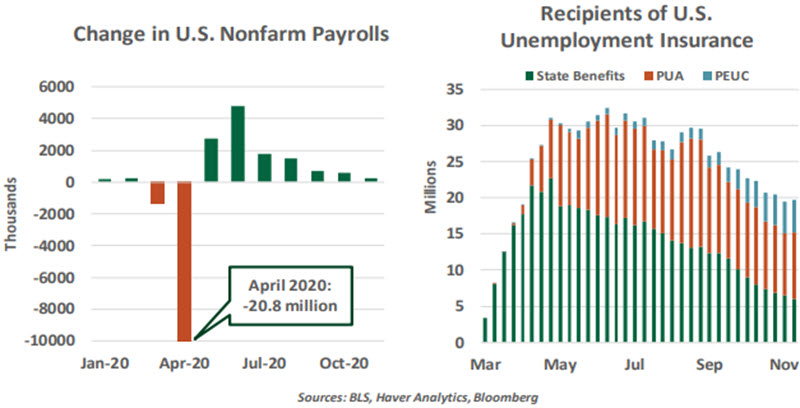 When Janet Yellen was on the Federal Reserve Board, she focused quite a bit on the goal of maximum employment.  She will now be in a position to serve as a bridge between Congress and the White House as fiscal discussions progress, and will likely press the case for measures that speed the return to employment for those who have been displaced.

This week, a group of U.S. House representatives and senators proposed a $900 billion package of pandemic aid that included help for the unemployed, small businesses, and state and local governments.  Its path to passage may be complicated, though, given the transition to a new administration and the impending Senate run-off elections in Georgia.

“In the near term, more spending is needed; in the long term, belts need to be tightened.”

In the longer term, Yellen is among the observers who have called the trajectory of the U.S. national debt “unsustainable.”  She is a board member of the Committee for a Responsible Federal Budget, a non-partisan organization that promotes fiscal discipline.  The Treasury secretary can serve as an influencer as the country tries to bring its borrowing under better control, but Congress holds ultimate responsibility. 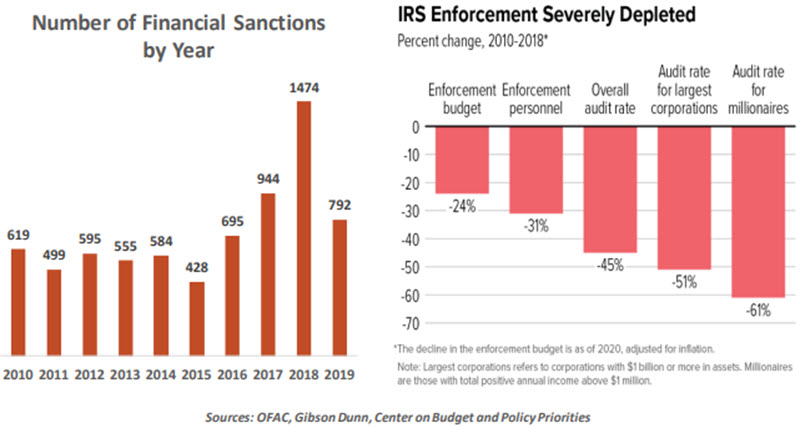 “The new Treasury Secretary will walk into a complicated political atmosphere.”

Janet Yellen is no stranger to the role that politics play in financial policy.  While the Fed is largely independent of Congress, the Fed’s mandate and its members must be approved by the legislature.  Nonetheless, the level of political calculus surrounding the Treasury’s activities is far more intense, as we will likely see next month during Yellen’s confirmation hearings.

But we expect her to be up to that challenge, and the more fundamental ones that await her at the Treasury Department.  If she succeeds, we may one day see her face on U.S. currency.

Consumers have weathered a year with issues no one saw coming.  So much about 2020 was different than usual, but one constant remains: The holiday season is upon us, and the urge to give gifts is strong.

The COVID shock and recovery have not treated all people equally.  Those on the upside of the K-shaped recovery have maintained their incomes and can look forward to joyful holidays ahead.  High-income households have spent freely on resources and redecoration to make the most of their time spent at home.  Wealth effects of rising stock prices have supported these endeavors.

Those on the downside of the “K” have had to be more frugal, as they are more likely to have suffered job interruptions and now face the end of unemployment benefits. Fortunately, many consumers in this category saved a good portion of the government support they received.

Those savings are about to become even more critical.  Last March, the CARES Act codified several protections for consumers: an eviction moratorium as well as payment deferrals for most mortgages and student loans.  Some of those measures were continued beyond their initial deadlines, but as of this writing, most will expire at the end of the year.  At the same time, programs that expanded eligibility for unemployment insurance will also expire.  More than 13 million recipients will lose unemployment benefits just as payments for rent and student loans come due.  This will stress household finances.

For some families, debt has been used to bridge gaps in income.  Total consumer debt grew by 2.9% year-over-year in the third quarter of 2020, showing only a slight slowdown in the second quarter as auto dealerships were temporarily closed and shoppers stayed home.  Debt delinquencies have held at low levels, often supported by leniency on the part of lenders or required by Congressional stimulus packages.  As borrower forbearance programs expire toward the end of this year, the health of consumer credit could be at risk; this was one of the central arguments for additional fiscal stimulus.

The tangible prospect of COVID-19 vaccines gives hope, but it provides no aid to anyone falling behind today.  Even if a permanent cure will arrive soon, consumers should be given help through this disruption, rather than face lasting financial damage just before their prospects are poised to improve.

Initial readings of holiday spending reflect a slower economy.  The National Retail Federation reports that 186 million people shopped over the Thanksgiving weekend, down from 190 million a year ago, spending on average 14% less this year.  Some of this decline came from consumers front-loading purchases and retailers offering discounts earlier in the year.  But certainly, some consumers on the lower leg of the K-shaped recovery are spending less as they endure unemployment.  As you might expect, online purchases have jumped, and sales through traditional retailers have faded. 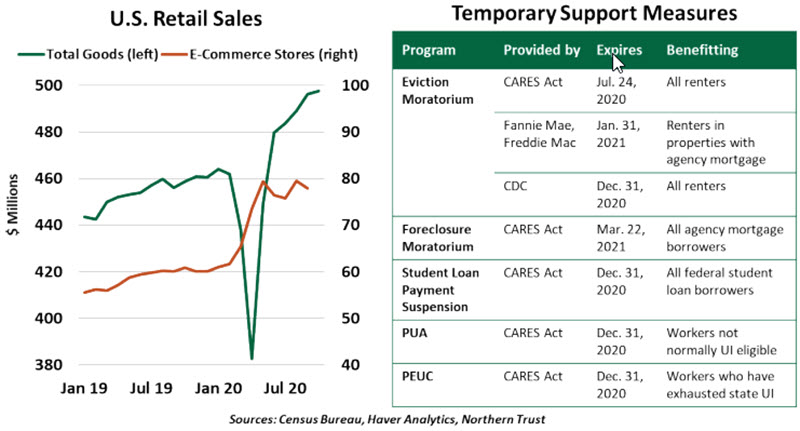 “The threat of economic stress may curtail spending by many households”

After the holidays, we look forward to a year of returning to normal.  Consumers’ outlays on goods were still 8% higher in October than they were a year ago, while services spending remains 5% lower.  As service businesses reopen and rehire, employment and spending should return to more typical levels of growth.  But this December, some celebrations will remain muted as families ride out the COVID-19 wave.  Hopefully, there will be enough gift deliveries on the doorstep to provide some cheer.

With major world economies, particularly from the Western Hemisphere, pushing for protectionist policies on trade, their eastern counterparts have a taken step in the opposite direction.  After eight years of negotiations, China, Australia, Japan, New Zealand, South Korea and 10 other Southeast Asian nations signed the Regional Comprehensive Economic Partnership (RCEP) last month.  The RCEP is the world’s largest trade deal, covering about one-third of the global economy.

The RCEP, which will co-exist with other deals, has all the usual ingredients of a free trade agreement.  It will lower tariffs on 80-90% of covered goods over a 20-year period, streamline customs procedures and standardize rules for investments with a built-in investor-state dispute settlement mechanism.

The RCEP includes two other important elements.  First, the deal harmonizes the disparate rules of origin in the region.  Second, it brings together countries that have often had delicate trade relations, such as China with Australia and China with Japan.  China is already the biggest import source and export destination for a majority of RCEP signatories, and the new trade pact may boost its regional trade even further.  That said, other RCEP members may benefit even more as firms seek to diversify their supply chains away from China amid lower barriers.

According to a paper from the Peterson Institute for International Economics, under the current trade setting, the deal will boost annual global national incomes by $209 billion in 2030 compared to a $121 billion gain from the Comprehensive and Progressive Agreement for Trans-Pacific Partnership (CPTPP).  The biggest absentee from the RCEP is India, which declined to join, citing concerns over Chinese imports.  India’s participation could notably increase the deal’s benefits (see below chart). 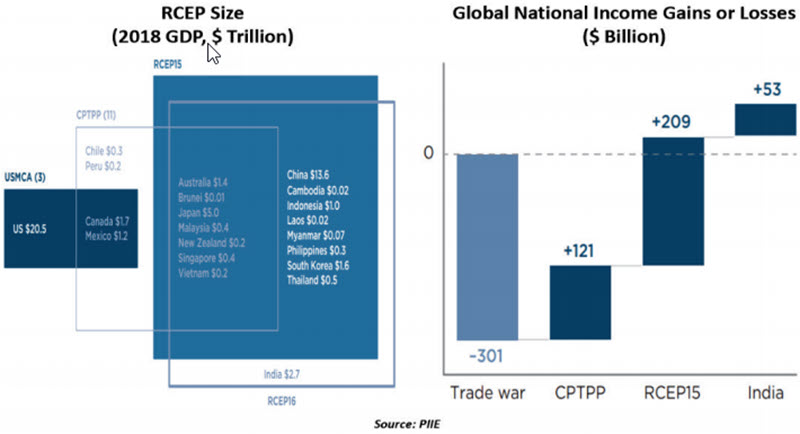 “RCEP is the biggest trade deal by value, but its direct economic benefits will be limited.”

Though a net positive, the RCEP is less ambitious than the CPTPP as it fails to address key issues pertaining to intellectual property, state-owned enterprises (a concern often associated with Beijing), the environment and labor.  The agreement eliminates fewer tariffs than CPTPP over a longer time horizon (within 20 years).  Moreover, of the $2.3 trillion of goods traded between member states last year, over 80% passed between those that already had a trade pact.

Still, at a time when global trade and multilateralism are losing ground, the RCEP is a significant step that could bring Asia closer to becoming a unified trading zone.  More importantly, the deal could restore confidence among observers that trade pacts aren’t a thing of the past.