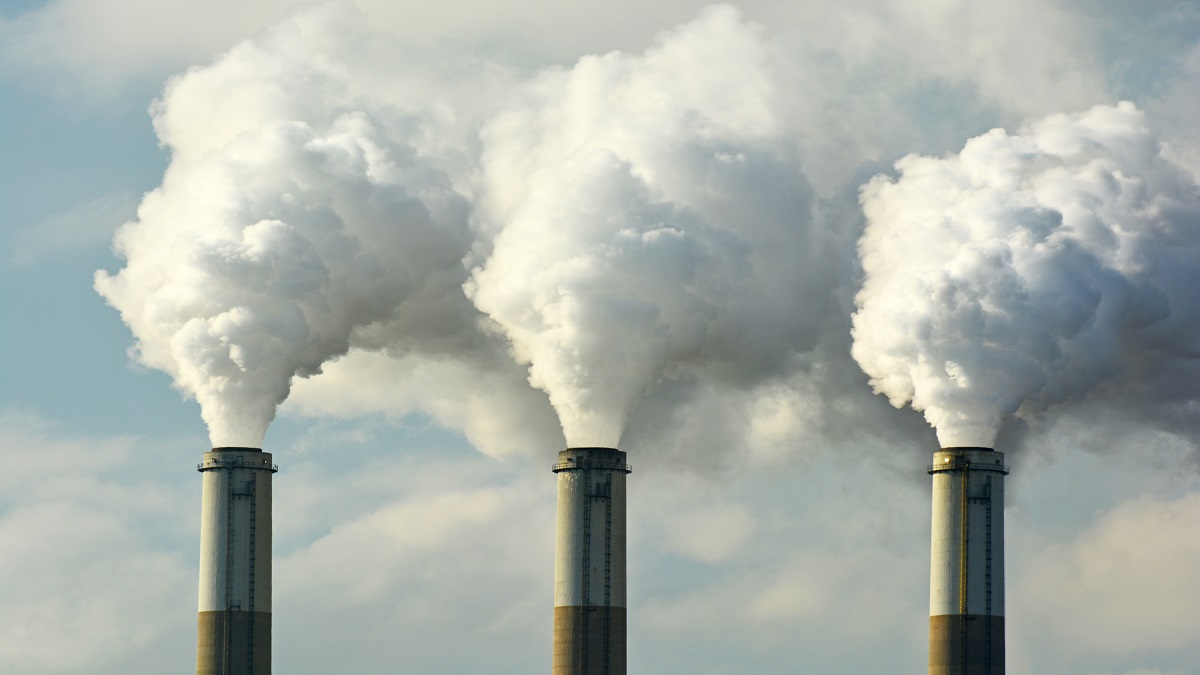 Taxes are primarily charges on individuals and corporations used by governments to finance their expenditures.  While the main purpose of tax regimes is to accumulate revenue, some assessments are intended to discourage certain activities and promote desired outcomes.  In this spirit, there is growing interest in taxes that are assessed on greenhouse gas (GHG) emissions.  But without appropriate calibration and universal adoption, these “carbon taxes” will not solve the world’s climate problems.

Finland was the first nation to introduce a carbon tax in 1990.  Today, 25 countries (out of 193 members of the United Nations) have them.  While the approach or scope may vary from place to place, a carbon tax is typically based on the emissions (usually measured in carbon dioxide, or CO2) of a product or process.  The tax is paid by the emitters.

Canada currently has one of the most ambitious carbon pricing programs in the world.  The government has ratified a nationwide tax on oil, coal and gas that starts at $15 per ton of carbon dioxide, set to increase to $38 per ton by 2022.  Within Europe, 17 member countries have implemented levies ranging from less than $0.40 per ton in Ukraine and Poland to over $120 in Sweden.  In the U.K., emitters pay more than many of their European counterparts. 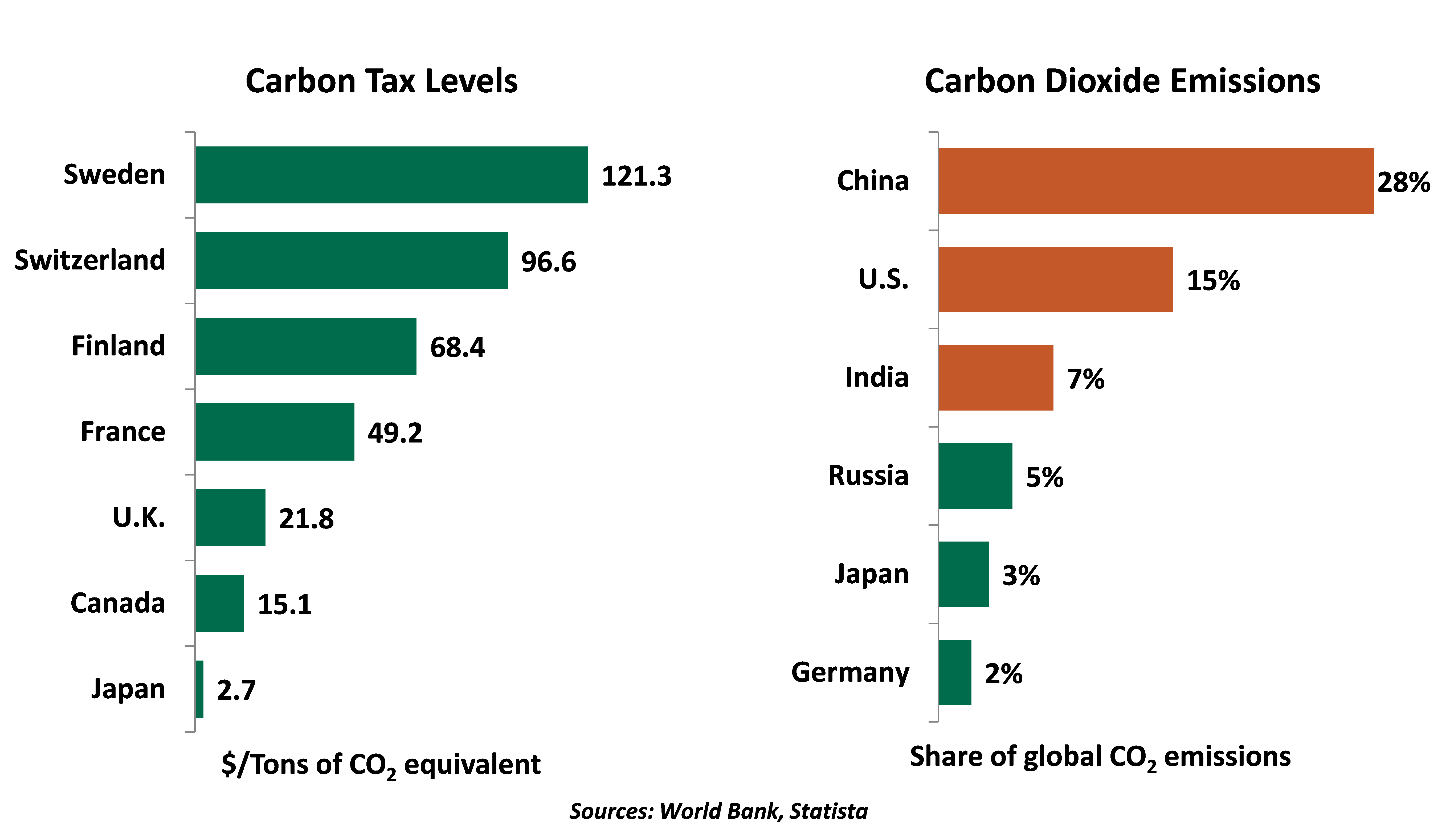 While carbon taxes increase the price of fossil fuels, they also help raise a significant amount of revenue that can be used to offset the potential impact of higher fuel prices on consumption.  Revenue can be returned to residents in the form of tax cuts and rebates, or used to support those affected by the migration away from “brown” industries.  In total, about $44 billion was raised in carbon pricing revenue worldwide in 2018, with France generating the highest revenue.

A carbon tax system is believed to be the most economically efficient method for meeting the Paris Agreement’s goals to mitigate climate change, but it still has challenges.  Tax evasion is unquestionably a risk, depending on each country’s culture of tax compliance.  Losses from tax avoidance are notably greater in low-to-middle income countries.

In addition, a carbon tax does not guarantee reduced emissions.  Raising the cost of fossil fuels makes polluting more expensive, but producers can opt to pay the tax without altering their behavior.  Higher carbon taxes would change this conduct, but several nations have found it politically challenging to take this step.  In France and Australia, efforts to increase carbon taxes were shelved after popular backlash. 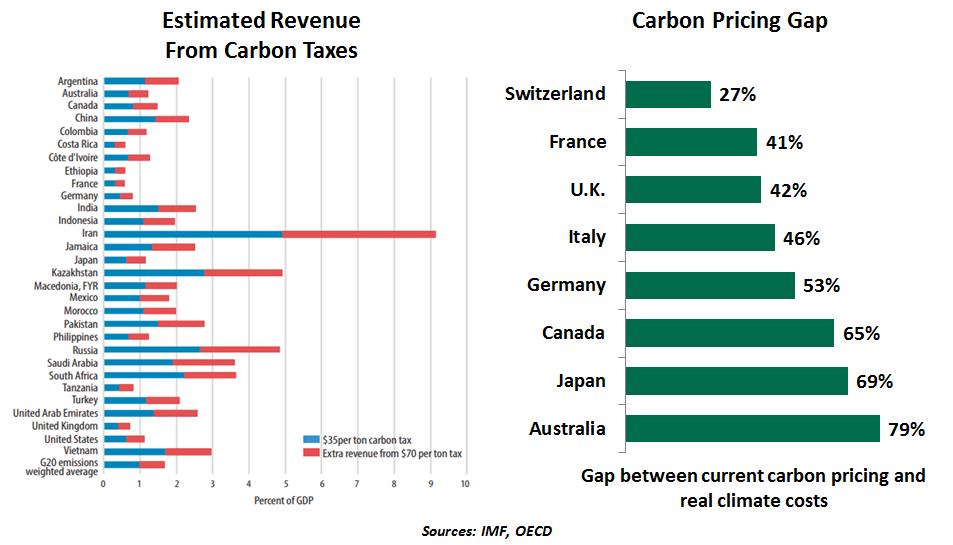 Several carbon tax programs are fairly modest and are playing only a supporting role in mitigating climate change effects.  Many major polluters are not even in the game.  China, the United States and India are the largest emitters of carbon dioxide in the world, and none has a comprehensive system in place.  The U.S. and India place taxes on polluting items like fossil fuels, but those are meant to cover fiscal or infrastructure outlays rather than change investment and consumption attitudes.

Policymakers have often deliberated whether the best way to reduce carbon use is with higher prices or quantity restrictions.  The latter approach is known as an emission trading system (ETS), or cap-and-trade, regime.  These constructs put a ceiling on emissions and establish a market price for CO2 through the buying and selling of a fixed amount of rights to pollute.  Administrators of these systems have to create allowances, distribute them (often through auctions) and track them.

Only six jurisdictions are currently covered by an ETS.  Set up in 2005, the European Union’s ETS is the largest cap-and-trade system, covering around 45% of the EU’s GHG emissions.

Fraud has been a significant issue for cap and trade systems.  In January 2011, the EU suspended trading in allowances after $9 million worth of GHG emissions permits were stolen from an account in the Czech Republic.  Hackers have also broken into accounts in Austria, Poland, Greece and Estonia, stealing about $40 million of permits.  The risk of cyber theft seems a bigger problem than the risk of tax evasion in a carbon tax regime.

Though carbon pricing systems are advancing, projections show that the world will likely fail to contain the rise in global temperatures. (Warming of less than 2° Celsius by the end of this century is the common goal.)  The gap between actual carbon prices implemented by nations and what would be needed to meet the target is still large in most places.  According to an International Monetary Fund report, a global average carbon price of $75 per ton would be required by 2030 to achieve that target.  The current global average carbon price is only $2 per ton.

“Carbon pricing is becoming more common, but it is far from achieving the desired results.”

The world’s largest producers of CO2 are not with the program. The United States is set to withdraw from the Paris Agreement in 2020, and coal remains engrained in India’s growth story.  China’s nationwide carbon trading system, scheduled to be deployed this year, will likely have limited coverage.  For countries like China and India, controlling carbon is not just a matter of long-term climate change; both countries experience high numbers of air pollution-related deaths every year.  And yet the political will to act is weak.

Climate change is a serious challenge for the global economy and the global populace.  Implementing a carbon price, whether through a tax or a carbon market, is one way of addressing this challenge.  Cleaning up the environment will entail costs to the economy, but the costs of not acting will be far greater.

A cliché of the corporate vocabulary is to avoid harsh words like problem or mistake, and instead, suggest opportunities for improvement.  A similar line of thought went into the new opportunity zone designation created in the Tax Cuts and Jobs Act of 2017.   Opportunity zones are a new geographic category, offering incentives to spur investment in regions that most need revitalization.

Investors who purchase and improve properties in opportunity zones can have their capital gains taxes deferred if they reinvest their profits into other opportunity zones.  Any productive improvement is eligible, from residential rehabilitation to new industrial corridors.  Investors who hold their stakes for ten years will be allowed to raise the investment’s cost basis to the fair market value at sale, effectively eliminating taxable gain.  This is a substantial benefit.

Over 8,700 areas in the U.S. are now designated as opportunity zones.  Identification is left to the discretion of each state’s governor, a subjective and political progress that led to an array of zones not equally blighted.  Some areas in central business districts are not aligned with the higher-risk, long-term investment objectives of the program.

Most opportunity zones, however, have earned the need for special treatment.  They are plagued by familiar themes: loss of employers, opioid abuse, populations that are dwindling and less educated.  They often have poor transportation links, far from pools of workers.  They have seen disinvestment for a host of reasons unrelated to tax rates on investors’ future returns.

To qualify for the tax incentive, the majority of the new development’s value must originate from within the opportunity zone; a developer cannot simply build an outpost of an existing business and expect a tax benefit.  It is unclear that this incentive can overcome difficult local outlooks.

Opportunity zone investors must approach their decisions as they would any other real estate investment: By assessing the potential uses of the land, considering the risks and prospects of the surrounding area and analyzing the expected return on any improvements made.  The tax incentive for capital gains, after all, is worthless if an investment does not yield a positive return.  The terms of the program reward investors who lock in capital for ten years, beyond many investors’ preferred time horizons.

“Taxes are just one consideration among many for real estate investors.”

These investments are open to anyone.  Qualified Opportunity Funds are new vehicles that allow investors to put their capital to work without getting directly into the real estate business.  The funds identify and invest in opportunity zone projects.  This new conduit helping capital to flow into high-need areas is beneficial.  However, it separates investors from the communities they are supporting, adding to a perception that opportunity zone investing is just a tax shelter.

An analysis by tax adviser Novogradac estimated that over $7.5 billion has been invested into qualified opportunity funds, from the tax program’s inception in 2018 through January 2020.  This number is certainly too low, as it only includes publicly disclosed fund investments.  Real estate developers, private equity funds and individuals who have taken on opportunity zone projects do not need to disclose their use of the opportunity zone tax structure.

We will not know the total utilization, costs and outcomes of the opportunity zone program until the ten-year incentive horizon starts to expire in 2027. High-profile projects have skewed toward high-end developments that do not fit the spirit of the program, led by wealthy investors who have the least need for a tax incentive.  The program will be worthwhile if it leads to job creation and neighborhood revitalization, but evidence of these positive outcomes is scant.  Tangible improvements to these areas will be the metric by which to judge the success of opportunity zones.

The areas targeted as opportunity zones present opportunities in the modern sense of the word.  Their problems run deep, and their residents feel left behind.  New investment is badly needed.  If a capital gains tax break helps to make those investments happen, it will be a worthwhile incentive.

There seems to be an awful lot to worry about at the moment.  The coronavirus has yet to be contained, trade frictions around the world remain high, and the American election season is ramping up.  Yet despite the considerable array of downside risks, major equity indices have continued setting record highs.  How can these circumstances possibly be reconciled?

The answer is simple: the stock market is not the economy.  The two are related, but distinct; several key factors separate them..

“Markets and the economy are related, but not always closely” 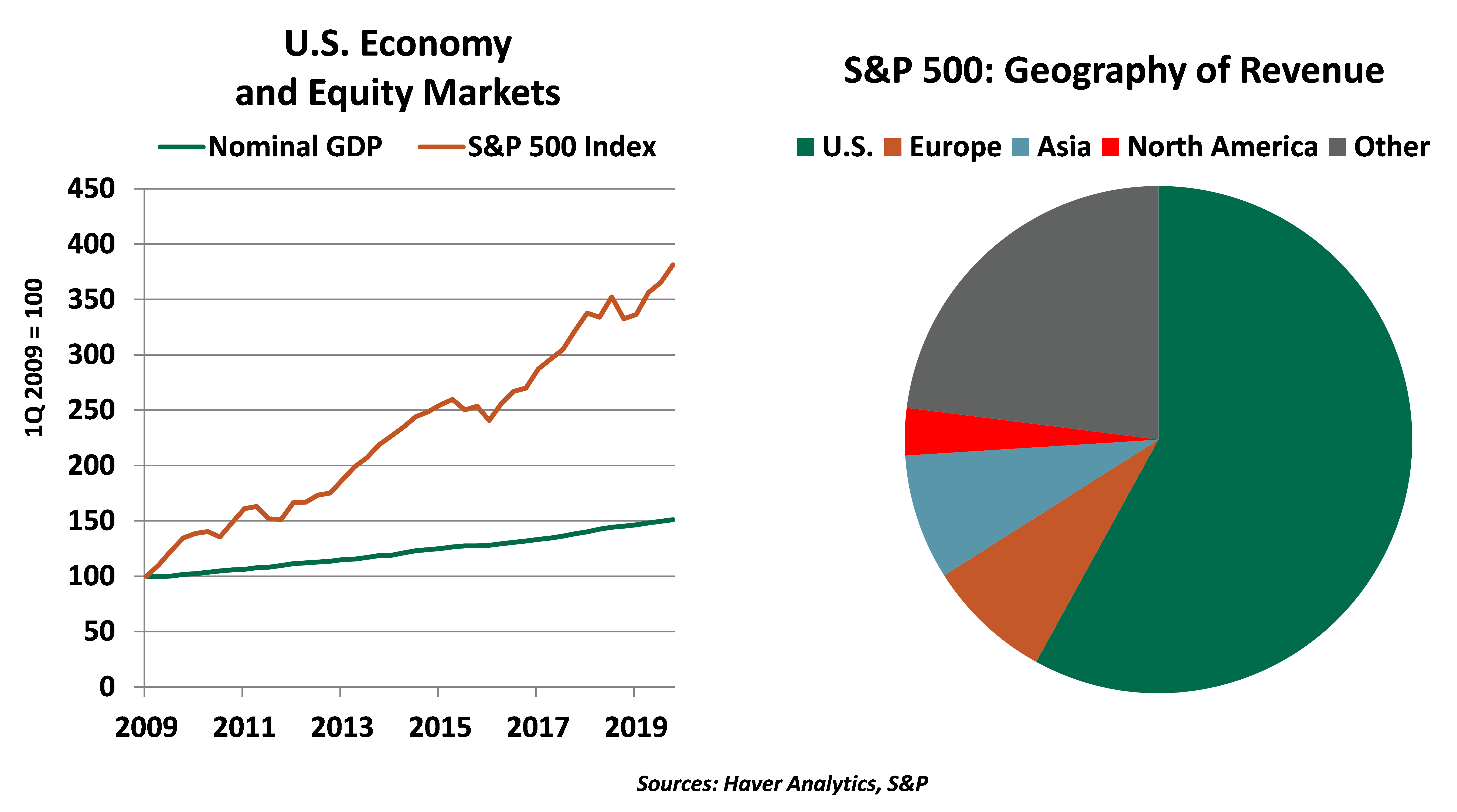 To be sure, major economic trends will have an influence on stock prices (and vice versa).  But the two don’t have to move in lock-step with one another.  The appropriate level of association is the subject of considerable debate, which we will leave to greater minds than ours.