We’ve been closely watching developments related to COVID-19 for the past several weeks.  While we have hesitated to make significant changes to our outlook until evidence is clearer, we now expect the economic damage done by the outbreak will be more significant than initially thought.

Here is the basis for that conclusion:

“The economic risk created by COVID-19 will lead the Fed to cut rates this spring.”

As the U.S. Federal Reserve prepares for its next meeting in three weeks, troubling anecdotes will likely be prominent in regional economic summaries (the “Beige Book”).  The staff will probably come to the same conclusion that we have: we are not looking at a temporary interruption from which there will be a “V-shaped” recovery.  Even if China goes into overdrive after production resumes, bottlenecks elsewhere will constrain the recuperation.

Fed officials have yet to sound a strong alarm.  U.S. fundamentals remain quite good.  But with additional time and consideration, we think the Fed will want to ease financial conditions and buffer the economic blow.   A cut should come at the end of April.  More may be needed if we slip into a more severe scenario.

Earlier this week, the World Health Organization said it would be premature to classify COVID-19 as a pandemic.  But the risk of an economic pandemic is rising.

There has never been a better time than today to be a consumer.  The assortment of goods available is broad, of high quality, and affordable.  These gains have come from decades of process refinement, as producers root out inefficiencies and seek competitive advantages. But the systems that have served the global economy so well have now created systemic risks.

Just-in-time (JIT) manufacturing has been central to this evolution. Pioneered by Toyota, JIT seeks to integrate and optimize every touchpoint of an assembly process.  Prior to Toyota’s innovations, auto factories could be thought of as simple production lines, with loads of raw materials going in one door and finished vehicles driving out the other side.  The factory ordered whatever was needed to produce a vehicle and handled assembly on its own.  Toyota was the first to integrate its suppliers into its processes, planning exactly which vehicles would be produced at set times.  Its suppliers delivered only the inputs required and no excess, exactly when needed and no sooner.  This formed the basis of supply chains, which have been broadly adopted in recent decades.

The advantages of this approach are clear and profitable.  Its investment in planning allowed Toyota to lower its stocks of unfinished inventory and free up working capital.  The careful coordination raised the cost of work stoppages from defects, requiring quality controls that led to more reliable finished products.

JIT manufacturing creates sensitive linkages between suppliers and buyers.  Suppliers must be able to deliver to their customers on time, with no margin for error.  While many industries initially worked in clusters, with manufacturers and their suppliers in close geographic proximity, supply chains have grown longer.  As global shipping has become cheap and reliable, components can be built in any location that provides cost advantages and shipped worldwide.  Final assembly is still happening just-in-time, but with inputs that have been shipped weeks in advance of production. 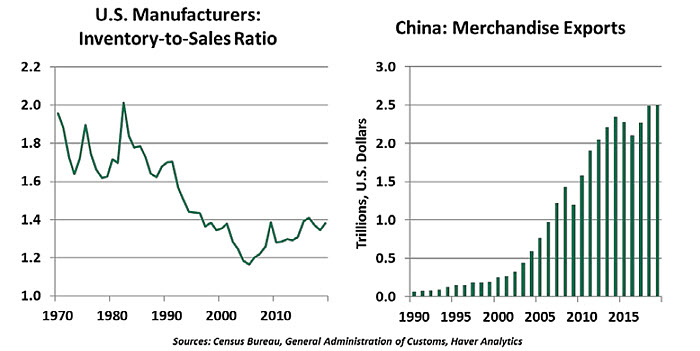 The benefits of JIT caught on across sectors, and China became a dominant provider. These enhancements brought gains in quality and costs that have benefitted both producers and consumers.  But those efficiency gains created a new geographic risk.  Placing final assembly in one region, with inputs dispersed among other nations, assumes those regions will remain productive and accessible.  Recent developments suggest that such confidence was misplaced.

Modern manufacturers share a weakness: If a production line stops, carefully choreographed supply chains will choke.  Quarantines and travel restrictions slowed the flow of workers and materials into China’s factories, a severe blow to a manufacturing-dependent economy.  Estimates of China’s recovery are variable and uncertain.  The country’s output is currently estimated to be at half its usual level, and it will take months to return to 100%.

Every country and company with exposure to China, whether on the supply or demand side, is feeling the slowdown.  Countries in closer proximity and with tighter production links to China are feeling the worst effects of the slowdown (see following article), but no country is immune.

Producers who depend on goods from China are already feeling the pinch.  A zealous pursuit of lower inventories has been rewarded by shareholders, but smaller inventories will be depleted faster.  Apple was the first company to warn of missing sales targets due to unavailability of its products, but it will not be the last.  It felt a shock of both supply and demand: Chinese factories could not ship its products at their usual volume, while Chinese consumers deferred their electronics purchases.

We expect the global economy to weather the COVID-19 outbreak, but its aftermath will bring scrutiny to fragile supply chains.  The future could bring other epidemics, natural disasters and higher costs of shipping if carbon pricing takes hold.  Business continuity assessments will surely take these risks more seriously.  And the U.S-China trade conflict illustrated the political vulnerability of international commerce.  Concerns about terms of trade and national security can derail productive relationships.

As tariff fears took hold, producers found shifting production out of China to be a difficult and expensive proposition.  JIT has made supply chains difficult to move.  A determined manager could close a factory in China and reopen in another country, but rebuilding a tightly integrated supply chain takes years of coordination.  These efficiencies have made China a sticky destination, and it has been holding on to production even as its own labor costs have risen.  China is no longer the cheapest place in the world to run a factory, but it remains the most efficient.

Trade tensions and a pandemic are shifting the conventional wisdom around manufacturing.  In a world of good health and free trade, production will naturally flow to locations that offer the lowest costs and greatest efficiencies.  But as uncertainty grows around the world, manufacturers may reconsider the benefits of dispersion and redundancy in their production processes.  In this sense, COVID-19 could have a more lasting effect on global commerce.

While China’s was the locus of COVID-19, the virus has gained a foothold in Asia’s major economies.  Japan and South Korea, the world’s third and 12th largest economies respectively, now claim the highest numbers of confirmed cases of the virus outside of China.

Japan and South Korea are highly vulnerable to supply chain disruptions.  China is both the biggest export market in the world and a key source of goods imports for both countries.  In addition, the outbreak threatens to slow domestic demand as residents spend more time in isolation.

The Japanese economy was already struggling before the outbreak, contracting in the fourth quarter of 2019.  COVID-19 may cause Japan to fall further in the first quarter of 2020.  Equity markets have fallen while the yen has depreciated, as Japan faces increased risks of recession owing to its dependencies with China. 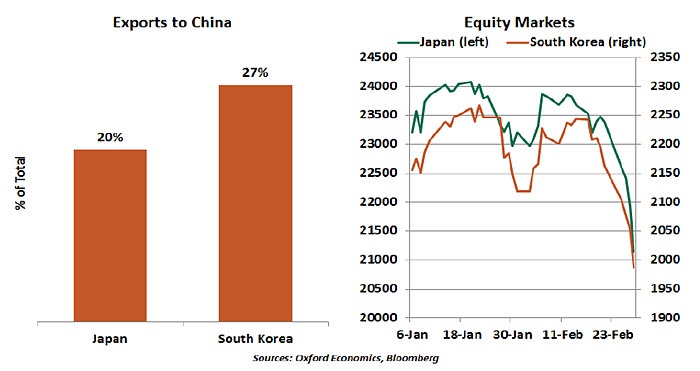 South Korea started the year seeing green shoots amid reduced U.S.-China trade tensions.  However, with the virus spreading fast inside South Korean borders, the shock to domestic consumption (accounting for 50% of gross domestic product) will be significant.  The South Korean markets and currency have suffered, while manufacturers’ confidence has plunged the most in five years.

“COVID-19 has hit Japan and South Korea both medically and economically.”

Recent disruptions suggest the recovery will be slow, particularly for Japan.  In 2011, after the Tōhoku earthquake, Japan’s industrial output fell 13% but recovered only after several months.  Those hoping for a smooth, V-shaped recovery will likely be left disappointed.  Plus, the future of the 2020 Tokyo Olympics is in doubt.  The games could face a fate similar to that of the 1940 Tokyo Winter Olympics, which were reawarded to Europe because of Japan’s war with China, before being cancelled altogether due to World War 2.

The fallout is only just beginning, and Asia’s major economies are already feeling the impact of the outbreak.  The continued spread of COVID-19 will lead to isolation of more and more markets.  Quarantining a virus-infected person will help contain its spread; quarantining an entire market, however, will only add to economic pain.