Tensions between Iran and the United States bring a stressful start to 2020. 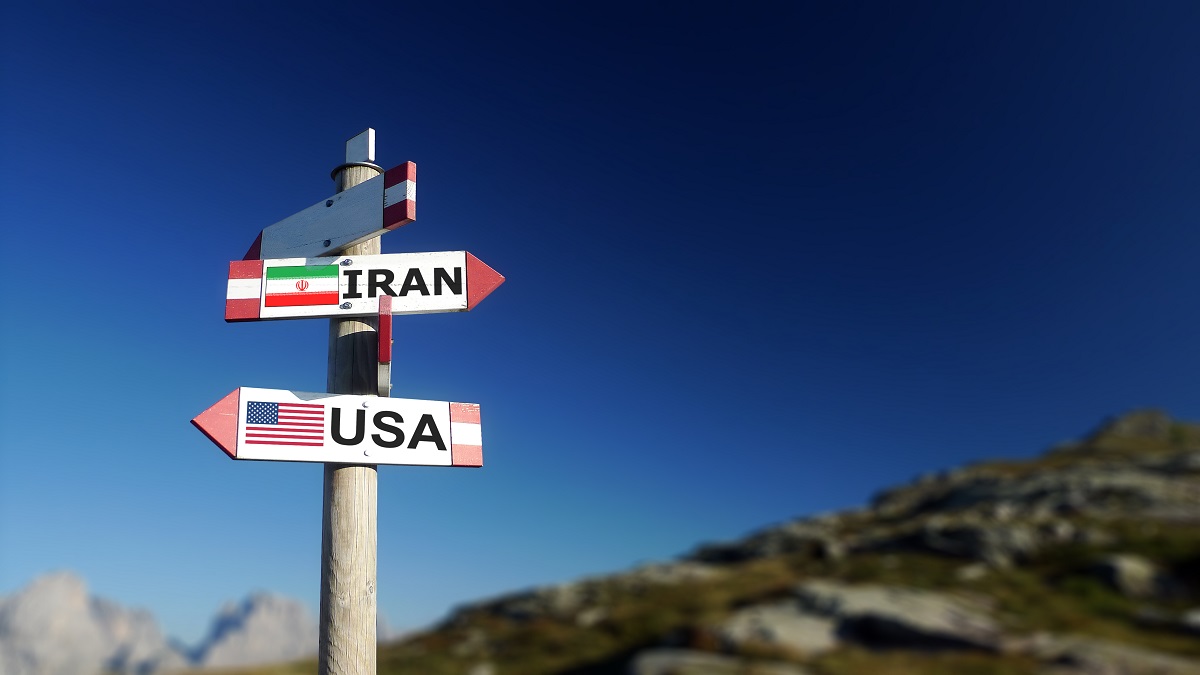 Mark Twain famously said that “history does not repeat itself, but it often rhymes.”  I was thinking of that phrase late last week, as an American embassy in the Middle East came under siege.  I thought of it again this week, as masses marched through the streets of Tehran chanting “death to America” and missiles flew over Iraq.  Events have not yet escalated to the extent they did forty years ago, or thirty years ago, but the final stanza of this epic has yet to be written.

Economies and markets often work through stressful situations smoothly.  Fortunately, sparks rarely become conflagrations.  But the Middle East has once again become a center of concern, and there aren’t many cool heads to prevail upon the aggressors to stand down.  The situation brought an abrupt end to the holiday lull for investors and policy makers and highlights the geopolitical risk that colors the outlook for 2020.

Stress between Iran and the United States has long and deep roots.  In 1953, the U.S. Central Intelligence Agency facilitated the overthrow of the democratically elected president in order to strengthen the power of the shah, Mohammad Reza Pahlavi.  The main reason was access to oil, which was coveted by both the Soviets and by the West.  The shah of Iran was embraced by America, but his methods ultimately alienated his citizens.  The shah fled in early 1979, and later that year Iran became an Islamic Republic.

In the wake of the revolution, oil supplies were interrupted and oil prices more than doubled.  This produced a body blow to the U.S. economy, which experienced two recessions in three years.  Heavier industries were hollowed out; some never recovered. 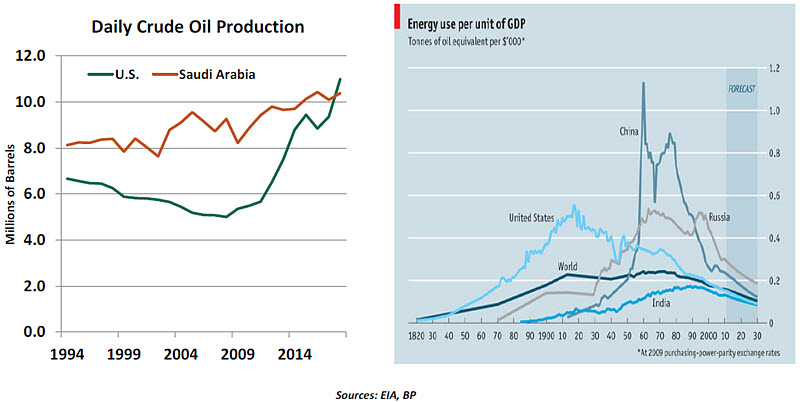 Fortunately, spikes in oil prices aren’t as threatening as they were back then.  The United States has become the world’s largest producer of petroleum, reducing its reliance on imported crude.  The energy intensity of Western economies has declined significantly, as manufacturing has gained efficiency and services have come to dominate output.

A more relevant potential precedent for today’s situation occurred in 1990.  That August, Iraq invaded Kuwait and claimed the country as its province.  Oil prices briefly doubled, but settled back down to their former levels when the Iraqis were expelled in early 1991.  More damaging to the U.S. economy was the steep decline in consumer confidence that began as events unfolded on live television; the conflict was the first to be covered by 24-hour news networks.

The Gulf War ended one of the longest expansions in U.S. history.  U.S. real gross domestic product declined by 1.4% and equity markets corrected by 15% during the second half of 1990.  Both results were mild relative to previous precedents.

Iraqi President Saddam Hussein was ultimately captured by American forces in 2003.  For all of his despicable actions, Saddam Hussein was intent on limiting the spread of Iran’s fundamentalism.  After he was removed, Iran was free to become more aggressive.  Using oil revenues, it has financed insurgencies in several Arab countries, including Iraq.

“Problems in the Middle East have presaged past U.S. recessions.”

Despite substantial aid and effort from the U.S., Iraq has struggled to re-establish a stable government.  The nation has been torn between pro-Western and pro-Iran factions; Russia and China also have interest and investment in the country’s future.  It is difficult to imagine a more complicated dynamic.

More broadly, tensions have been rising throughout the region over the past decade.  The Arab Spring of 2011 created internal strife in a number of countries, and led to the horrific civil war in Syria.  Stress between the branches of Islam is typified by the antipathy between Saudi Arabia (largely Sunni Muslim) and Iran (predominantly Shia).

Last May, the United States opted to withdraw from the agreement that limited Iran’s development of nuclear fuel.  It put strict sanctions into place, crippling Iran’s economy.  (See following article.)  The measures were intended to bring Iran back to the bargaining table; instead, Iran has come out swinging.  Iran’s navy detained several oil tankers in the Persian Gulf last year, and Iran-backed forces in Yemen attacked Saudi oil facilities last September.

Provocations have continued for the past several months, with each side striking at the other.  But the situation escalated sharply last week with the U.S. assassination of Qassem Soleimani, a senior Iranian commander, and Iran’s retaliatory missile attack on Iraqi military bases.  As of this writing, both sides seem intent on preventing further escalation, but the possibility of additional hostility remains.  Physical or technological attacks on targets in Saudi Arabia or the west would certainly dampen investor confidence and economic performance.

“The recent decline of globalization has made the world a more dangerous place.”

So far, tensions with Iran have had a limited impact on markets.  Oil prices spiked after recent attacks, but have since receded.  Market volatility remains muted, and major equity indices remain close to record levels.  But conditions could change quickly; larger shocks in energy prices would have a sizeable impact on global growth and inflation.

The weaponry at each side’s disposal should serve as something of a deterrent to keep the situation from getting too far out of hand.  But what is missing from the equation is the diplomacy that could serve to bring the combatants to the bargaining table.  The global trend toward nationalism has weakened international relations and international organizations.  And that, in turn, has made the world less connected and more vulnerable to event risk.

I have to confess that I never enjoyed free verse.  There is something much more lyrical about poems in which meter and word choices are calibrated so that sentences end in similar tones.  But when it comes to unpleasant historical events, I would be happy to do without the rhyme.

Sanctions have always been a significant component of America’s policy toward Iran.  It was thus no great surprise to see the U.S. reinstate secondary sanctions in November 2018 after its withdrawal from the 2015 multilateral nuclear accord.  But the severity of these sanctions was unprecedented.

In 2015, Iranian President Hassan Rouhani agreed to a deal with the U.S. and other world powers that restricted Iranian nuclear activities in return for relief from economic sanctions.  Thereafter, the Iranian economy bounced back quickly: The Central Bank of Iran estimated its domestic economy expanded by 13.4% in 2016, while inflation stayed in the single digits.

However, U.S. President Trump’s policy of applying “maximum pressure” since 2018 has crippled the Iranian economy.  The latest sanctions are the most comprehensive and punitive measures ever imposed by the U.S., targeting nearly all sectors of Iran’s economy including energy, shipping and finance.  American corporations are banned from doing business with Tehran and any foreign companies or countries dealing with the nation.  Though crucial supplies like food and medicine are not directly covered by sanctions, these imports have suffered due to limits on banking transactions.  Iran has resorted to the barter system to circumvent sanctions, an approach it has used in the past.

Cutting off access to the global energy market has battered the country’s oil income, its largest source of revenue.  Oil exports account for about 50% of total export earnings and 40% of government revenues.  Crude oil production has almost halved from about 3.8 million barrels per day (bpd) in mid-2018 to 2.0 million bpd in November 2019, with only an estimated 260,000 bpd on average being exported, possibly overland to black markets in neighboring countries.  According to the International Monetary Fund, Iran’s plummeting oil production and sales have led to a significant fall in country’s foreign exchange reserves, which have shrunk to $86 billion, 20% below their 2013 levels.  Foreign investments have dried up. 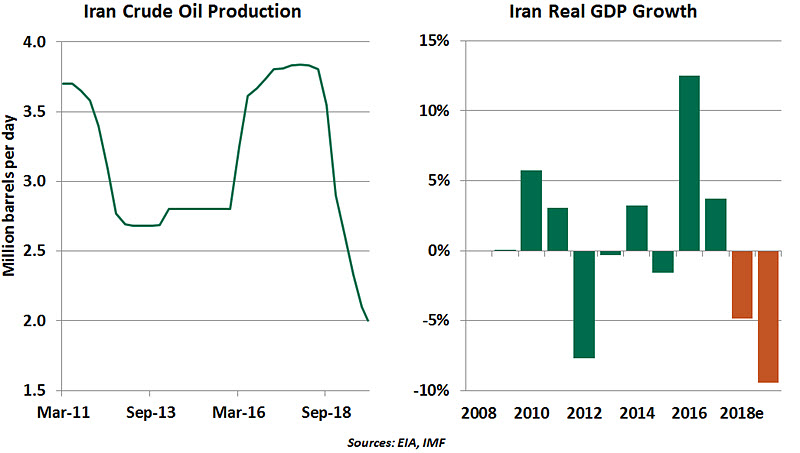 Iran's economy contracted by an estimated 4.8% in 2018 and 9.5% last year, its worst performance since 1984.  Iran was the third-worst performing economy of the world, with only Venezuela and Libya contracting more severely in 2019.  Since America’s withdrawal from the nuclear deal, Iran’s currency has lost about 50% of its value against the U.S. dollar on the unofficial market.  Living costs have risen dramatically.  Hyperinflation has hit Iranian consumers, with the annual rate of inflation reaching an estimated 36% in 2019.  The outlook for Iran's economy had already been grim entering 2020, as no relief from sanctions was expected; the recent conflict has only worsened the country’s prospects.

As in other parts of the world, dwindling economic fortunes and lack of opportunities are fueling discontent in Iran, a young country with 60% of its population under age 30.  Increases in gas prices intended to fill the budget shortfall have led to the country’s deadliest political unrest since the Islamic Revolution.  Though Iranians appear to be more concerned about the economic impacts than the threat of war, it is essential to understand that a real war would only further damage its purchasing power and erode the value of its money.  Though not likely, formal sanctions on humanitarian trade, like food and medical imports, would only worsen the situation economically, socially and geopolitically.

And recent events show the limits of sanctions as strategic tools.  Iran remains menacing in spite of a wretched economy; its supplies of missiles and hackers remain substantial.  And the nationalist appeals that followed the assassination of Iran’s de facto defense minister have led the population, for now, to forget their pocketbook problems.  The stress we experienced this week is therefore unlikely to dissipate anytime soon.

Economic measurements are the sum of innumerable daily transactions.  But sometimes, a single event can be big enough to shift results.  The struggle of Boeing’s 737 MAX aircraft is one such event.

Ethiopian Airlines flight 302 crashed on March 10, 2019, the second tragic accident involving the 737 MAX.  In short order, every country grounded the airplane.  Fixing the problem to the satisfaction of the world’s aviation authorities has proven more challenging than Boeing initially estimated.  As of this month, Boeing has halted production of the jet.

The market for commercial aircraft is concentrated, with Boeing and Airbus the sole producers of planes that can serve long-haul routes.  Boeing employs over 153,000 people worldwide, including 12,000 at the Renton, Washington factory that produces the 737 MAX.  Thousands more work for the suppliers and subcontractors vital to the plane’s production.  These idled workers will slow their local economies.  Meanwhile, Boeing has gone from delivering over 50 of these planes per month to zero.  With each plane’s list price over $100 million, these postponed purchases are pushing down business investment and exports. 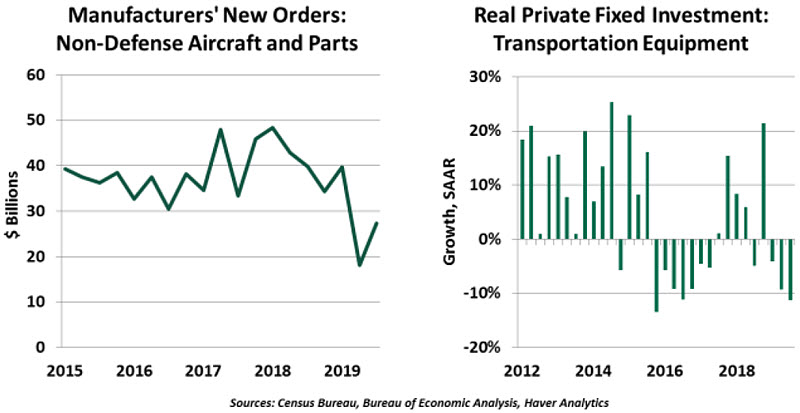 “When a manufacturer the size of Boeing slows down, the effects are contagious.”

The ripple effects are real.  In the second quarter of 2019, the White House Council of Economic Advisers estimated that Boeing’s then-nascent slowdown removed 0.4 percentage points from U.S. economic growth.  Since then, the situation has only worsened.  Oxford Economics estimates a reduction of U.S. gross domestic product growth by 0.5 percentage points in the first quarter of 2020, with a risk of over $1 billion in lost wages if production cannot resume this year.

Commercial airplanes are some of the world’s most sophisticated machines.  Their price tags and development cycles are beyond comparison to any product in the consumer market.  In an economy already challenged by an uncertain policy and trade environment, the 737 MAX crisis is yet another economic headwind.