Census Season, Coronavirus Contagion, and the Dish on Davos 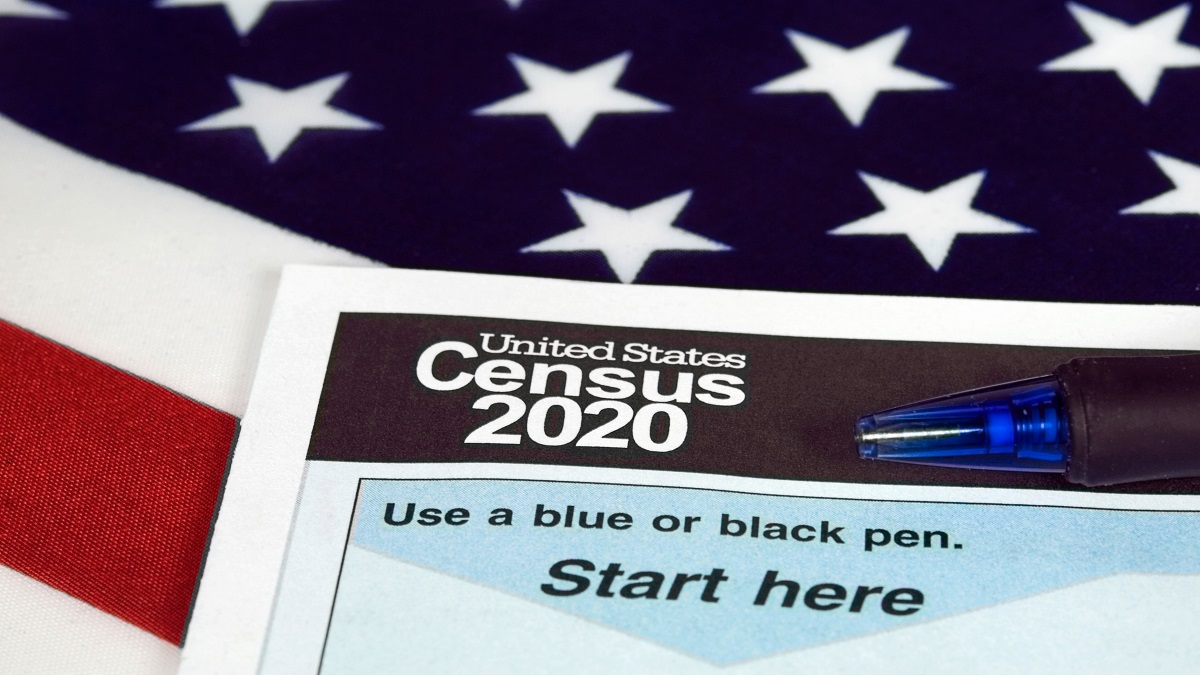 An old management aphorism tells us we can’t manage what we don’t measure.  Managing a country with more than 330 million residents is no small task, and it must start with an effort to identify all residents.  The basis for this will be the 2020 U.S. Census.  The results of the Census will be vital for the function of the country.  It will pinpoint and quantify several demographic challenges that will shape our outlook on the economy.

The Census is one of the few federal government functions stated explicitly in the U.S. Constitution.  Article I requires an “enumeration” of all persons in the United States in order to apportion representation in the House of Representatives.  The count of legislators then determines each state’s number of Electoral College votes.  With two recent Presidential elections determined by an electoral outcome that differed from the popular vote, this allocation receives much attention. 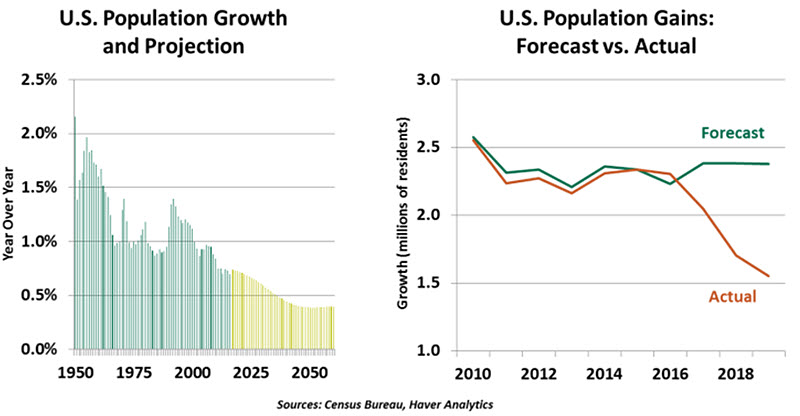 Beyond political outcomes, the population count is used to allocate infrastructure investments and other expenditures at all levels of government.  In total, the bureau estimates 132 federal government programs used its data to distribute more than $675 billion in government funds in the year 2015.  More broadly, the Census results are publicly available and are put to use for countless purposes.  Businesses can supplement their forecasts with Census projections to plan their expansions into new geographic markets.   State and local governments can allocate resources locally without needing to perform surveys of their own.  Academics can perform endless research using the results.

The U.S. Census Bureau does much more than just a once-in-a-decade report of the country’s population.  Its American Community Survey polls a random subset of U.S. households each month to keep reporting of population trends current.  Its Current Population Survey, conducted monthly in partnership with the Bureau of Labor Statistics, computes the widely-cited unemployment rate.  Additional surveys tabulate vital statistics around housing and construction activity, household income, voter registration, poverty and homelessness, disability, fertility and geographic mobility.  These data series are vital, but all are based on representative samples of the United States population that are built from the results of the decennial census.  Because it counts every identifiable person, the Census sets the baseline for much of the bureau’s other work.

“About a half million temporary workers will help ensure a complete count.”

Given the importance of the Census, its accuracy is paramount.  Much effort goes into preparing each survey cycle, right down to dispatching temporary workers to verify whether homes still exist.  Most of the Census responses are submitted by mail.  Households that do not reply can expect a visit from one of the Census Bureau’s hundreds of thousands of temporary workers, hired to pound the pavement to maximize participation.

With low unemployment and rising labor force participation, this year’s Census hiring appears to be slower than in past cycles.  The bureau is promoting flexible, part-time hours, appealing to workers with other commitments. 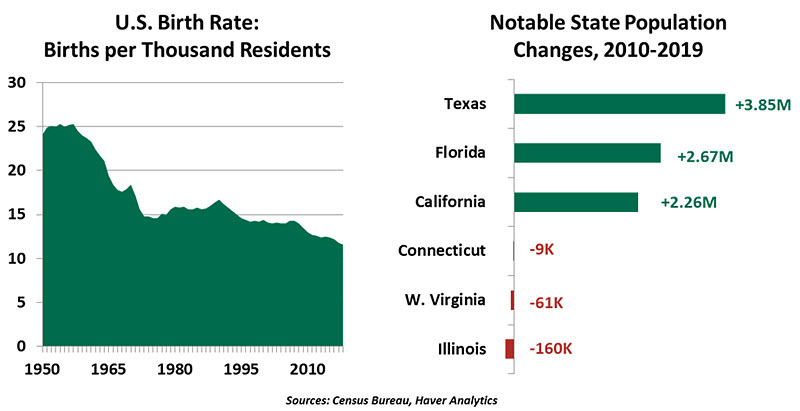 The Census questionnaire is brief, with less than one page of questions per person.  It asks only for name, age, gender, ethnic origin and family relations among the household.  But concerns about use of the data, especially in an era of heightened immigration enforcement, may cause some families to stay quiet when a government employee knocks on the door, leading to undercounting.  Though instructions are translated to dozens of languages, respondents who do not speak English may not know these translations are available.

Once the results come in and data is tabulated, we expect official results to reinforce trends that have become apparent in recent years:

Slower population growth.  Already, actual U.S. population growth is falling noticeably below projections, driven by lower birth rates, slower immigration and increased mortality.  The U.S. has historically avoided a falling birth rate, a common challenge of wealthy nations.  The country has been an attractive destination for immigrants, who grow the population upon entry and often have larger families.  But immigration is slowing, and the birth rate continues to fall.

“The U.S. is on course for slow population growth.”

Today’s young families are, in many cases, still catching up from lost wages and a slow career start stemming from the 2007-2009 recession.  Life events like marriage and childbirth are easy to postpone amid economic uncertainty and rising student debt burdens.  Few countries have ever reversed a trend of falling birth rates, and increasing immigration would require a substantial policy reversal.

The U.S. government asks for very little of its residents’ time.  Citizens may be conscripted for wartime military service and occasionally summoned for jury duty.  In addition, once a decade, the government asks everyone in the country to identify themselves.  With so many decisions informed by those responses, we hope that everyone will stand up and be counted.

Not A Happy New Year

Markets breathed a sigh of relief earlier this month.  De-escalating trade tensions and a path forward for Brexit seemed to reduce downside risks to the outlook.  But a new risk has brought new worries: a mysterious respiratory illness known as the “coronavirus.”

The disease was first recorded in the Chinese city of Wuhan, which is home to the highest number of cases. Wuhan is an industrial and transit hub, sometimes touted as “China’s Chicago,” but with a population of 11 million.  As of this writing, the virus has killed more than 200 people in China.  Though cases are concentrated there, about 10,000 cases have been confirmed globally, and the figures are expected to rise in the coming weeks.

The virus and its unknown origins call to mind the 2002-03 outbreaks of severe acute respiratory syndrome (SARS), which claimed about 800 lives.  During that crisis, growth in China’s gross domestic product (GDP) dropped from 11.1% in the first quarter of 2003 to 9.1% in the second quarter.  However, it recovered to 10% in the second half of 2003.

Though the current mortality rate of the coronavirus remains well below that of SARS, the virus’ spread has sent shockwaves across global markets and is seen as a threat to growth prospects.  Restrictions on travel, shipping, and even working in some places will take a direct toll; the outbreak fell in the middle of Lunar New Year, China’s peak occasion for domestic travel and consumption.  In an effort to reduce travel and stem the spread of the virus, Chinese authorities extended the Lunar New Year break, which will curtail economic activity even further.

Given that China’s economy accounts for about one-third of world economic growth, the slowdown will be felt globally.  China is not only known as the world’s factory, accounting for 35% of global manufacturing output.  It is also fast emerging as a major global consumer.  Although it only accounted for 10% of global household consumption from 2010 to 2016, according to World Bank data, China accounted for 38% of global consumption growth.

Owing to their increased dependency on Chinese travelers, the tourism, aviation, retail and entertainment sectors of other Asian economies like Japan, Singapore, Hong Kong and Macau will likely suffer.  This will likely be more severe than the downturn resulting from the SARS episode.  Additional restrictions on transportation that lead to lower factory output will have implications for Australian (mining) and Indian exports.  The European Union will take a hit too: Exports of German factory machinery and auto parts from Eastern Europe will decline.  In the worst case, the virus could jeopardize the “Phase One” trade agreement, as it could impair China’s rather ambitious commitment to purchase American farm goods. 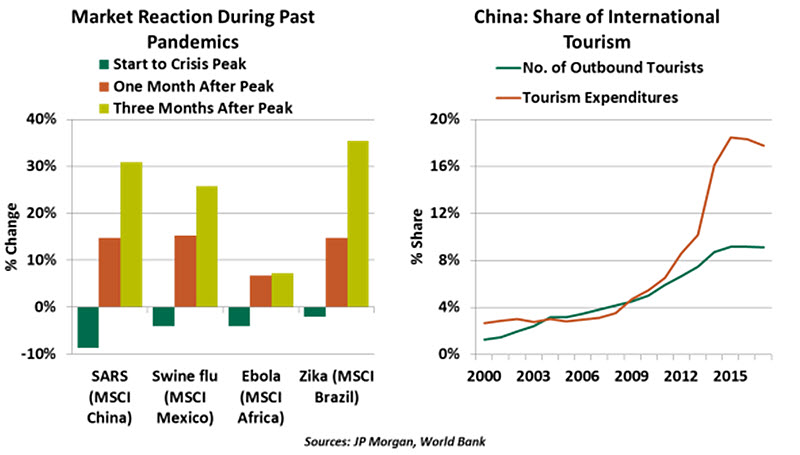 While it is still too early to gauge the extent of the outbreak and its consequences, the economic costs will keep mounting.  In the near term, Morgan Stanley expects a hit of 0.5-1.1% to China’s GDP and about 0.15-0.4% to global growth.  These figures will be at risk of increasing if the episode grows in severity and longevity.

“The coronavirus outbreak is not just an economic headwind for China, but for the world too.”

Uncertainty over the course of the virus is also affecting market performance.  Nervous investors are quickly moving money into risk-off assets, boosting the U.S. dollar and yen.  Yield curves have flattened while equity markets worldwide slumped.

The pattern of past pandemic fears should provide some reassurance.  While no two episodes are alike, in each of the four cases shown above, initial public health fears were quickly allayed and markets rallied powerfully.  We should all hope that in the case of the coronavirus, biological and financial contagion will be contained soon.

Down From The Mountain

Some observers have described the World Economic Forum (WEF) in Davos, Switzerland as a gathering where a privileged few debate what’s best for the underprivileged masses.  High-minded discussions of climate change are attended by delegates whose private jets leave an outsized carbon footprint.  Solutions to world poverty are concocted over canapés and Bordeaux.

Perhaps I am just jealous at not having been invited.  Or, just perhaps, Davos is somewhat out-of-touch.  Its aim of bringing world leaders together to devise global solutions is at odds with the go-your-own-way nationalism that is currently in vogue.  The main observations that emerged from this year’s WEF all reflect that disconnect:

I am sure many of the WEF delegates returned home feeling as if they had moved the needle.  But to others, the impact of the WEF has been difficult to gauge.

The first trade accord between the U.S. and China leaves plenty of tension in place.

Is The WTO Losing Relevance?

Without traffic rules, movement on the world's roads, rails and ports would be chaotic. In a similar way, global trade would be disorderly in the absence of the World Trade Organization (WTO), which has set the traffic rules of the global trading system for more than twenty years.