Carl comments on the protests that have spread across the United States.

I grew up on the South Side of Chicago in the 1960s. The latter part of the decade was a challenging time for our city, and for our country. I lived close to the University of Chicago, which was convulsed by student protests. The neighborhoods adjacent to ours were convulsed by anger over racial and economic inequality.

In some ways, our city has progressed since then. But in other ways, things have not changed. We received a reminder of that last weekend. The death of a black man in the custody of Minneapolis policemen was the catalyst for massive demonstrations (and, unfortunately, some violence). But the roots of the discontent that has been on recent display go deeper than the often-fraught relationship between black citizens and law enforcement.

The economic struggles of the black community in America are long-standing. Median family income for black families has been persistently and substantially below the national average. This is due, in part, to lower levels of educational attainment, which is central to better earnings prospects and a lower risk of job displacement. Only 23% of black Americans hold college degrees, a rate more than 10% lower than that of the U.S. population as a whole.

Even after adjusting for educational attainment, income and wealth disparities along racial lines are substantial. Access to professional networks is one reason why; studies have shown that bias (conscious and subconscious) is another factor.

Prior to the pandemic, the United States was celebrating its best job market in nearly fifty years. But the unemployment rate among black Americans was still 3% higher than that of white workers. Layoffs stemming from public health measures taken to restrict the outbreak have hit black workers disproportionally; they are overrepresented in many of the occupations that have been hardest hit.

Unfortunately, they are also much less likely to have a financial cushion to help them through this difficult interval. Almost 20% of black households have net worth that is zero or negative.

“Policy must seek to improve prospects for America’s black communities.”

Black families are also much more likely to live in urban settings. Major cities in the United States have struggled to attract investment and sustain employment. This, in turn, has created acute financial challenges that limit spending for schools and social services, leaving many black families and black children with a much tougher path to prosperity.

Urban living has also meant greater risk of exposure to the coronavirus, which has hit black communities much harder than others. And the neighborhoods that surround these communities often do not have access to the best health care services. The COVID-19 mortality rate for black patients is twice as high as it is for white patients.

Economic outcomes are the product of personal responsibility and government policies. We can all better our lot by working harder, and by making good choices. But for some communities in our country, industry and good judgement are not enough. It is the responsibility of policy to reduce obstacles to achievement by investing appropriately and effectively. If opportunity becomes more accessible, outcomes will follow.

None of this is to condone the unfortunate actions and reactions we’ve witnessed over the last week. But reducing the risk of episodes like this one going forward will require more than just heightened understanding among the communities involved. It will take a durable plan to change the fortunes of those who have not shared in the prosperity of the past generation.

I attended very well-integrated public schools. Fifty years ago, they were an oasis of calm amid turbulent times; race and class meant little to us, and we all felt we could progress solely on our own merits. It would be naïve to think that the egalitarian harmony we enjoyed in our classrooms could be easily translated to the community at large. But it is vision worth pursuing.

The coronavirus pandemic has been extraordinarily disruptive to public health and commerce. Among the areas where it has been most impactful is in the realm of global production. While reopening will ease some frictions within the system, recent experience may lead to lasting changes in design.

A dearth of medical supplies and empty supermarket shelves have been frustrations during the COVID-19 outbreak. While a portion of the problem has been due to unforeseen demand and hoarding, it has brought global value chains (GVCs) into the limelight.

GVCs are cross-border networks that have been developed for efficient production.   More than two-thirds of global trade occurs through GVCs in which production crosses at least one border before final assembly. GVCs have been an engine of growth for emerging markets and a source of lower prices for consumers in developed markets.

To keep costs down, GVCs are built on tight tolerances. There is little excess inventory, and little redundancy. This leaves GVCs vulnerable to shocks.

China has become a dominant player in GVCs. The United Nations reports that China accounts for 20% of global trade in manufacturing intermediate products. Even before the pandemic, value chains were facing friction caused by the brewing U.S.-China trade war. According to Qima, a Hong Kong-based supply chain inspection company, American purchasers had already started moving their sourcing away from China. Much of that manufacturing moved to South Asia, where inspection demands grew 37% year-over-year in 2019.

“Global value chains are carefully designed, but vulnerable to shocks.”

The initial outbreak in China caused factory shutdowns that rippled through global production processes. As the virus spread, so did production outages and bottlenecks. While just-in-time delivery has elevated the precision of production, the pandemic illustrates that the ‘just-in-case’ concept has been ignored. When supply chains are interrupted, companies and countries that lie upstream and downstream are affected.

Europe is significantly integrated into GVCs. European countries are also heavily dependent on foreign demand, which has added to their troubles so far this year. By contrast, nations that export only a fraction of their output, like the U.S. and India, are incurring less damage. 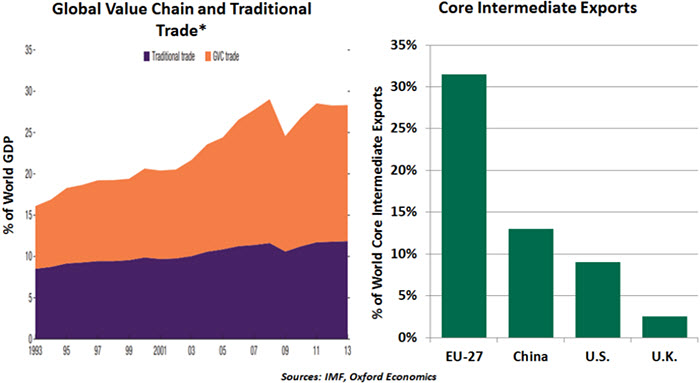 Beyond these short-term impacts, the pandemic is likely to have long-term consequences for GVCs. China is a key link in most value chains, and the outbreak exemplified its importance as a provider of inputs to factories around the world. German supply chain consultant Kloepfel Consulting’s survey showed that “81% of companies rely on Chinese suppliers” and “every 3rd company has major Chinese customers.” Automakers had to temporarily halt production worldwide as they couldn’t secure parts from China.

Many U.S. businesses have become dependent on Chinese factories. China produces more than one-fifth of overall U.S. imports, making it the U.S.’s third-largest trade partner after Mexico and Canada. Imports from China are not mere baubles, representing a substantial share of electronic equipment components, machinery, furniture, plastics, clothing and footwear.

China has been gradually losing some of its cost advantage and competitiveness to other Southeast Asian nations. However, it is an efficient exporter and deeply embedded in many GVCs, which has protected its share of global trade. As a result, companies are likely to diversify their operations by adding another location in Asia, a “China Plus One” model of sourcing, instead of leaving China entirely.

But to avoid future supply bottlenecks and increase resilience, clamor for the nationalization of value chains is growing. The French Minister of Economy and Finance has called for EU governments to rethink their approaches to value chains. Japan has announced a $2.2 billion package to support its companies’ movement of production out of China. The phrase “economic security” is being invoked to drive re-shoring.

The disruption presents growth opportunities to some emerging markets outside of Asia. Eastern Europe and Central/Latin America could be the recipients of transplanted production. Communities within developed countries could also see their fortunes improve if firms and countries seek to keep more production close to home. 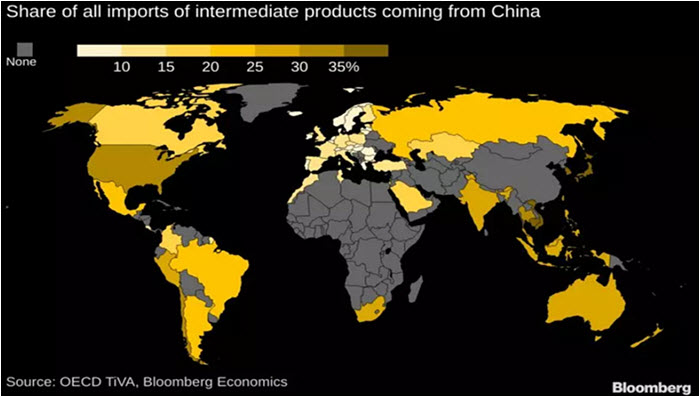 “Re-routing supply chains away from China may be easier said than done.”

But moving production platforms away from China may be easier said than done. No country is self-sufficient, and comparative economic advantages allow goods to be made where a nation can produce them most competitively. Rearranging value chains will not only require coordination and collaboration across markets but also will require large financial commitments. Changing infrastructure and supply lines could take years. Large losses from COVID-19 are leaving many businesses starved of cash. Investment in other locations will likely mean thinner margins for businesses, at an inopportune time. And it could mean higher prices for consumers.

GVCs will continue to hold many advantages; a return to single countries of origin is unlikely. But value chains may never go back to where they were before the pandemic. COVID-19 has delivered an important lesson for manufacturers: don’t put all of your eggs in one basket.

The Federal Open Market Committee (FOMC) will meet next week. After a spate of decisive action, we expect no major announcements as new programs run their course. FOMC Chair Jerome Powell will certainly face questions about the Fed’s plans to ensure ongoing financial stability. One tool under consideration is yield curve control (YCC).

Currently, the FOMC only sets targets for short-term interest rates, and steers markets towards the desired outcome through open market operations. Under YCC, the FOMC would set a target rate for debt of longer durations, and modulate its purchases of government debt to move the market toward its target.

Targeting long-term rates is a natural next step in monetary policy. Fed officials have been clear and consistent in their skepticism of negative interest rates, rendering further cuts to the federal funds rate unlikely. Quantitative easing (QE) is in force, and YCC puts a framework around the purchases made under QE. 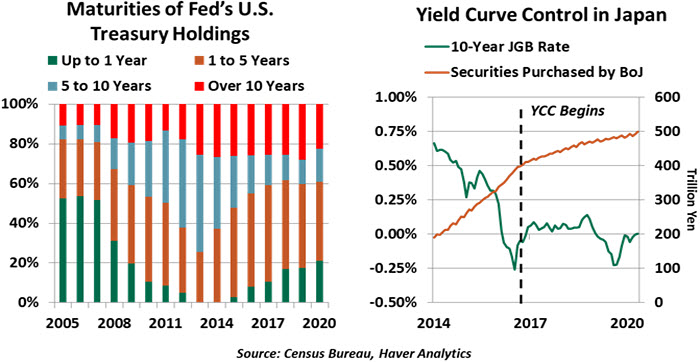 YCC has precedents. During World War II, the Fed purchased government bonds to lower their yields. This action helped to manage the cost of debt issued to fund the U.S. war effort. More recently, the Bank of Japan (BoJ) entered a YCC regime in 2016. Finding that a negative policy rate and QE alone could not bring the Japanese economy up to its 2% inflation target, the BoJ committed to buying bonds to keep Japan’s 10-year sovereign bond yield at 0%. This expectation of low-cost debt was meant to raise expectations of inflation.

Japan’s experience provides a cautionary tale. Significant asset purchases were required to move the market, making the BoJ the largest holder of Japanese government bonds. Despite this intervention, Japan remains far from its 2% inflation target, recording only a 0.4% increase to its core consumer price index in 2019. YCC must be used in concert with other policy to achieve the desired outcome.

To date, the Fed has been purposely vague about the scale of its QE program. Implementing a YCC program could offer some additional structure that would be useful for both the Fed and for investors.