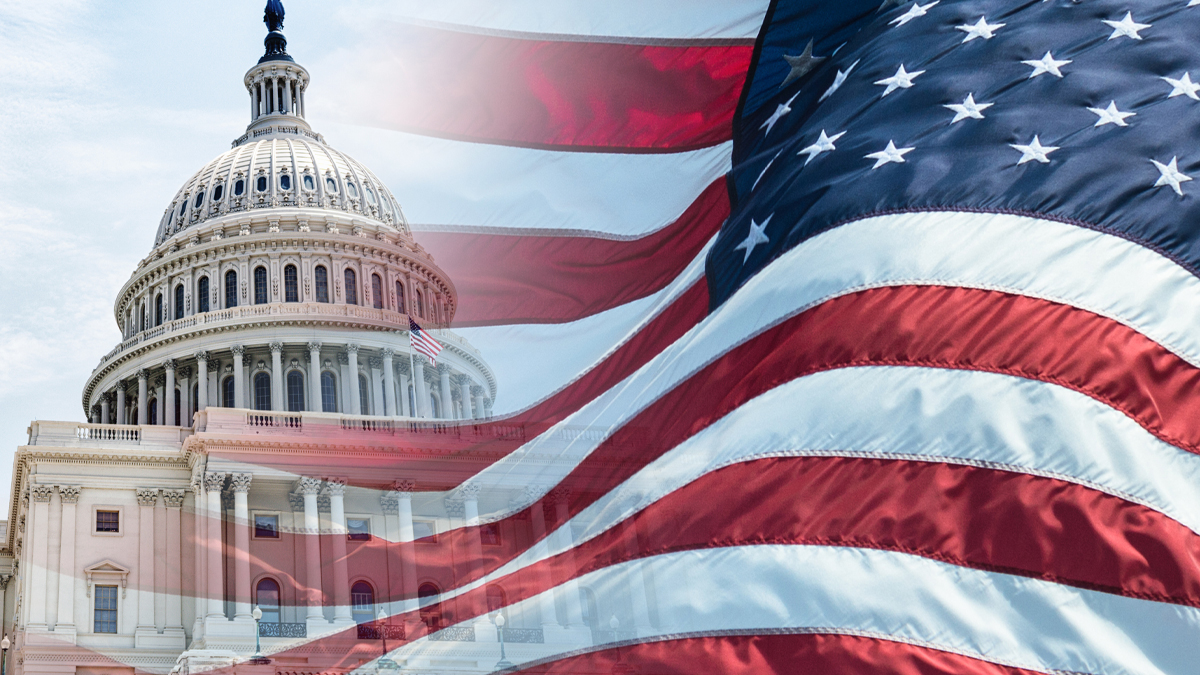 Editor’s Note: Ryan offers the fifth in a series of pieces that examine key economic issues surrounding the 2020 U.S. election.

Eleven years ago, I had the pleasure of witnessing my wife’s naturalization ceremony. The presiding judge opened with a memorable comment: “Swearing in new citizens is the only time everyone leaves the courtroom happy.” Everyone present nodded. Afterwards, we shared a nice celebration.

The immigrant experience is a long journey, and those who reach naturalization have reason for excitement. But the future of immigration is uncertain, and the United States’ openness to newcomers is the subject of much debate on this year’s campaign trail.

Immigration is a part of the American identity. Outside of those with Native American heritage, nearly all Americans have at least a passing awareness of their international ancestry. Immigrant influences are evident in the wide variety of surnames, cuisines and traditions observed around the country. About 14% of current U.S. residents were born somewhere else. 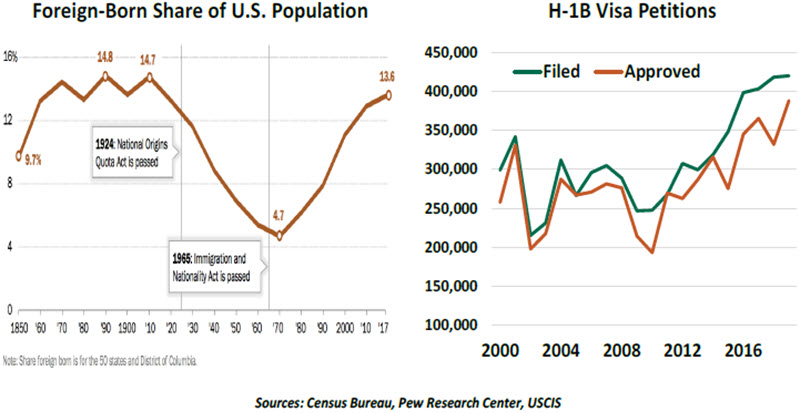 Immigration is economically important, too. Adding to the population, especially with younger arrivals, increases the potential output of the economy. Ambitious immigrants will find opportunity in the United States, the country that leads the world in attracting educated immigrants who file patents and launch new businesses at a higher rate than natural born citizens. These innovations help increase productivity, which also adds to economic growth.

But suspicion of immigration in the U.S. is long-standing. Immigrants can strain limited resources, adding to demand for housing, schools and healthcare. Unemployed Americans may see immigrants as competition for scarce jobs. The U.S. long ago abandoned its open borders, with restrictions dating as far back as the unsubtly-named Chinese Exclusion Act of 1882. Since then, leaders have periodically reshaped limits on new entrants, with mixed outcomes.

Each cycle of reform has added a layer of complexity. The U.S. has more than 30 categories of immigrant visas, and dozens more for temporary visitors. Workers who arrive with one of these visas will find opportunities to flourish.

“Immigrants are an important ingredient for economic growth. ”

People in the United States without a visa are undocumented or illegal aliens. The Migration Policy Institute estimates an unauthorized population of more than 11 million, two thirds of which are from Mexico and Central America. Immigration from Mexico has fallen in recent years amid stricter border enforcement, more deportation of undocumented workers, and a broadly better economy in Mexico that has led fewer residents to seek opportunities elsewhere.

Visa compliance can be difficult, especially for skilled workers. Recipients of an H-1B visa are allowed to work in the United States temporarily due to their specific skills, usually in science, technology, engineering and mathematics (STEM) fields. Demand for H-1B visas consistently exceeds supply. Since the category was created in 1990, Congress has limited the number of H-1Bs made available each year. The current annual statutory cap is 65,000 visas, with 20,000 additional visas for holders of a master’s or doctorate degree.

The H-1B program has been criticized for allowing employers to pay below-market wages. As the visa is tied to employment, an H-1B worker has less leverage than a permanent resident. But even receiving an H-1B is a gamble for recent graduates. The U.S. has traditionally welcomed foreign students but does not make it easy for them to stay and work. As shown in the chart above, processing of visas has slowed to a crawl since the pandemic began.

Donald Trump was elected on a platform that was suspicious of foreigners. The White House called for a total ban on immigration from majority-Muslim nations and for building a wall along the border with Mexico. While those proposals were not fully executed, changes to immigration policy under the Trump administration have been substantial. The President has called for implementing a merit-based system that would give priority to skilled immigrants while eliminating other programs like asylum and the random visa lottery.

The pandemic helped to advance the Trump immigration agenda. The U.S., like many countries, halted immigrant arrivals to stop the spread of COVID-19. But as the first wave subsided, entry controls were reinforced further by a June executive order that ceased issuance of all non-immigrant work visas through the end of 2020. Already, the pandemic has led to a decline in international university enrollment this year, a trend that will pressure the economics of higher education and may put a long-lasting damper on U.S. economic growth.

Joe Biden’s proposals for immigration reform emphasize rolling back recent restrictions and giving more undocumented immigrants a pathway to citizenship. The agenda mirrors past efforts at immigration reform championed by presidents and congresspeople from each party, suggesting that fixes are generally understood, if only the political will could be mustered to pass them.

“After the pandemic stalled immigration, will the usual flows return?”

Reforms that favor immigrants will face an uphill battle in a recovering economy. With unemployment elevated and labor force participation falling, political efforts may first focus on supporting the United States’ current population. But over the long term, keeping the borders open to replenish the American labor force and attract intellect will be critical to economic performance.

Successfully navigating the long path from immigrant to citizen is an achievement worthy of celebration. The paths have been lengthened for recent and prospective immigrants, but hopefully the parties will begin again soon.

As noted above, sustaining growth in the labor force is essential to the long-term performance of an economy. Immigration is an important factor in this equation, but it is not the only way for populations to sustain themselves. Organic growth is also very important. 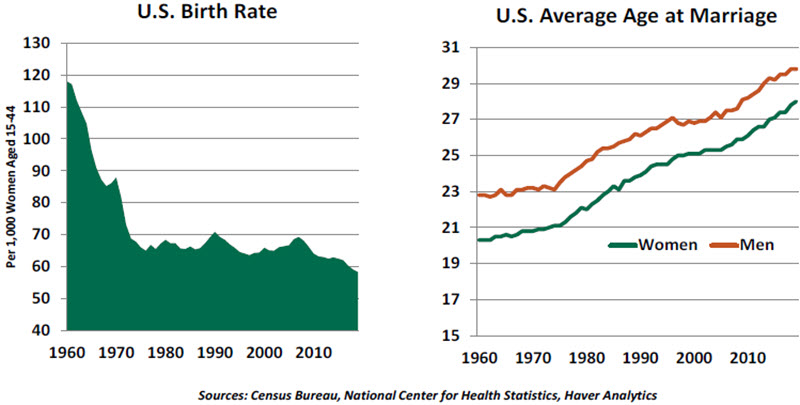 On this latter front, the United States is not keeping up. Birth rates are about half of what they were 50 years ago; fertility has fallen behind the rate required to keep the population constant. Economic factors have contributed importantly to this development.

For higher-income families, increasing standards of living are at play. Across time and geography, cultures that become richer have fewer children. The opportunity cost of mom or dad interrupting their careers to care for children rises, leading them to allocate less time to parenting.

For those in the lower income quintiles, financial considerations may also be suppressing fertility. Many new entrants to the job market over the past decade have seen their fortunes progress slowly. This delays marriage and parenthood. And when they become parents, young Americans are having fewer children.

Family decisions are, of course, deeply personal. But policy can have a hand in shaping them. One area that we discussed recently is child care: the availability of affordable, high-quality care can allow parents to sustain their careers and lower the cost of expanding families. A national parental leave program would also help with work/family balance. Expanded acceptance of flexible work arrangements would also help; the pandemic will certainly accelerate progress on this front.

Financial incentives can also assist. The U.S. tax code already provides credits for families with children and preferences to facilitate saving for college, but more could be done on both fronts. Taking a different angle, reform of the country’s student loan program could improve the lot of young people and couples, which would remove an impediment to family formation. We’ll discuss this at length next week.

To be sure, these ideas are progressive and will not come without costs. But the potential long-term benefit of increased fertility could be substantial.

In Shakespeare’s Richard II, England is referred to as “This blessed plot.” Today, citizens of England (and the United Kingdom more broadly) might disagree with that characterization. The area has been beset with a volatile mix of biological, political and economic maladies this year. Some of what is ailing the Sceptered Isle may eventually infect other nations.

COVID-19 crested in the U.K. in April, testing the capacity of the National Health Service. British Prime Minister Boris Johnson was among the early victims, enduring severe symptoms and spending a week in the hospital. The government imposed a seven-week lockdown, one of the harshest preventative measures taken anywhere outside of China.

The U.K. is one of a handful of countries that compiles Gross Domestic Product (GDP) on a monthly basis. April showed a frightening decline of almost 20% (outright, not annualized), as limitations on activity curtailed commerce. Our latest global outlook calls for Britain’s real GDP to contract by more than 7% this year, more than double the decline forecast for the United States.

Reopening during the summer allowed the U.K. economy to regain lost ground. But COVID-19 has re-emerged: new cases in Britain have increased tenfold since the beginning of September. To date, the government has declined to impose a second round of lockdowns, choosing instead to urge people to work from home and limit hours at pubs and restaurants.

With the pandemic on the march again in a number of other countries, the British experience foreshadows what might be ahead for others, including the United States. Consider:

Unfettered reopening is equally unattractive. Initially, Prime Minister Johnson was a proponent of allowing the virus to run its course, to hasten the arrival of herd immunity. Achieving that outcome could take many months, and cost scores of lives.

Britain and other countries will have to figure out how to “live with the virus,” a state somewhere between these two extremes. That will be easier said than done, considering:

Ideally, restrictions should be tailored within countries to focus on areas where outbreaks are most threatening.  Britain has proposed a three tier system, but northern regions have bristled at making more sacrifices than their southern neighbors. This has created a tense standoff between the capital and the provinces, which might easily recur elsewhere. 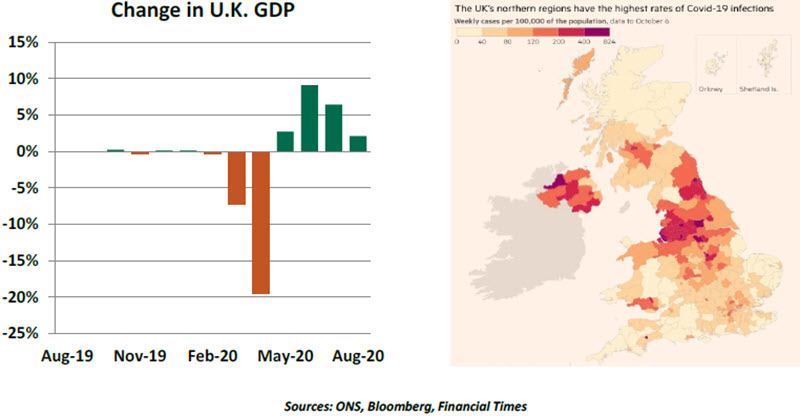 The uneven nature of outbreaks raises the possibility of travel restrictions within countries, of the kind that Australia has employed. The disruptive impact that limits on movement would have on commerce, not to mention the national mood, could be sizeable.

John of Gaunt’s deathbed homily inRichard II, quoted in the opening, is at once a celebration of England’s greatness and a warning of imminent decline. His closing observation that “England…hath made a shameful conquest of itself” rings true today. Other countries may be heading for a similar fate.

Spotlight on trade: What it means for the election, displaced workers, and the U.S.-China Phase One deal.