Keep up with how the latest headlines moved markets, and what’s up next.
SUBSCRIBE NOW
Investment Perspective, October 2020
October 13, 2020

The results of the 2016 election were clear on election night, but the 2020 election is not setting up to be as clear.

U.S. presidential election polls are showing an increasing lead for the Democratic candidate, former vice president Joe Biden, against President Donald Trump – and markets are relatively calm just weeks ahead of the November 3 election. What could be contributing to this steadiness? To the extent that one candidate develops a significant lead, the associated risk of a delayed outcome is reduced. Markets hate uncertainty, and the potential of a delayed election outcome has weighed on investors’ minds. The expected significant increase in mail-in ballots has raised the specter of days (possibly weeks) of ballot counting post-election night, with ensuing legal battles and public relations spats. Biden’s increasing lead – if it plays out in actual voting – reduces the potential for this outcome. Additionally, financial markets are fixated on the next round of fiscal stimulus, which remains caught up in negotiations. Democrats are viewed as more likely to support significant additional fiscal expansion, which the stock market would view favorably. On the flip side, the higher corporate taxes proposed by the Democrats could cut S&P 500 company earnings by around 7%.

Having one-party control in Washington facilitates passing new legislation, but a slim majority isn’t enough. The Republicans’ current 53-47 Senate majority allows two or three Republicans to object to any Republican vote, without ending its prospects. Should the Democrats win the White House but only have a one- or two-seat majority in the Senate, they may be constrained. Should Trump win reelection, we would expect a continuation of the current split-power structure – as the Democrats look likely to maintain their majority in the House of Representatives.

The results of the 2016 election were clear on election night. Investors viewed the Republican platform of tax cuts and deregulation as good for growth but also bad for bonds due to higher interest rates. The 2020 election is not setting up to be as clear. Control of Congress remains uncertain and the margin of victory will be important for either party. As a result, we will likely need to see the election results – and the ensuing policy and personnel pronouncements from the victors – to understand the intermediate-term implications of the election. Over the short term, a correction is always possible, while heightened volatility seems more probable. In the meanwhile, we remain moderately underweight risk – focused on “less risky” risk assets – in our global policy model. While our base case calls for economic growth to persist, we don’t think markets are providing much margin of safety for unexpected political or geopolitical risks.

As the economy grapples with mixed economic data, rising pandemic cases and the upcoming presidential election, Treasurys across the yield curve have been stuck in their respective tight trading ranges for multiple months. After a brief yield spike in hopes of fiscal stimulus, Treasurys quickly reverted to their recent ranges. Pricing action has been dictated by fiscal stimulus – or lack thereof – and the potential outcome of the U.S. presidential election. This stagnant trading trend is exemplified by examining the ICE Bank of America MOVE Index, a measure of U.S. Treasury volatility. After spiking in March to levels not seen since the global financial crisis, the MOVE Index hit an all-time low at the end of September. The recent lack of Treasury volatility underscores uncertainty within financial markets as investors stay put in safe-haven Treasurys.

The low volatility in the Treasury market helped the standard deviation of changes in the 10-year Treasury achieve its second lowest quarterly reading (5 basis points) since the 1960s. As we get closer to the U.S. presidential election, we expect volatility to pick up – both directionally on the curve and the outright level. But our longer-term expectation for low rates keeps us modestly overweight duration vs. client/strategy benchmarks. 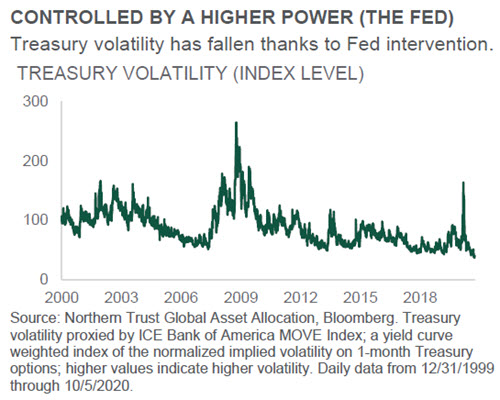 The high-yield market experienced a notable divergence in performance across ratings during the month of September. The lowest quality securities in the market, CCC-rated securities, generated positive returns and materially outperformed higher-quality credits despite volatility in risk assets and a negative return for the high-yield market. The strength in CCC-rated securities has coincided with lower default rate expectations, driven by better than expected corporate earnings and access to primary markets to extend debt maturities. The percentage of high-yield issues trading at distressed levels – currently 4% (versus a recent high of 30%) – suggests default rates may be even lower than current consensus.

Some of the underperformance in higher-quality credits can also be explained by heavy new issue volume. Investors tend to sell more liquid securities – which usually are higher rated – to raise cash for new issues. The September outperformance of CCC-rated securities hints that investors remain confident in the economic outlook. High yield remains our highest conviction overweight. Technicals, liquidity and fundamentals are all strong – and the asset class mitigates downside risk in the event of a further equity market sell-off heading into the election. 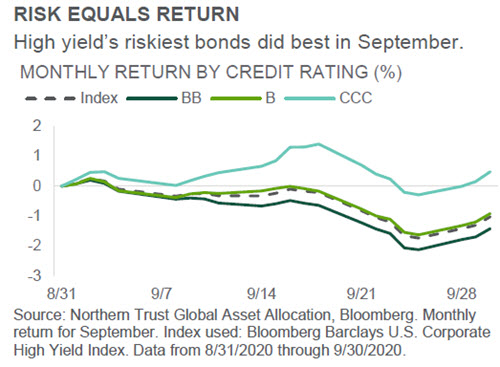 Global equities were largely unchanged over the past month, as the reality of increasing pandemic cases was offset by optimism for a vaccine. In the U.S., large cap tech finally took a breather, with each of the top five U.S. tech stocks trading lower last month. Quarterly earnings season is again upon us, where global earnings are still feeling the pressure of the global economic disruption. Emerging markets are expected to hold up best, down 9% from a year ago (aided by flattish growth in China), while the U.S. is expected to be down 20% and developed non-U.S. markets down 33%.

U.S. earnings bottomed in the second quarter and should show rebounding growth over the next year. U.S. earnings are expected to finally match the levels of late 2019 by the back half of 2021 (emerging markets sooner, Europe a bit later). However – with the U.S. presidential election just a few weeks away, a potential rise in pandemic cases into the winter months and elevated valuations – we remain moderately underweight U.S. equities. We are also underweight emerging markets given geopolitical uncertainties and neutral non-U.S. developed countries given low valuations – suggesting a low-growth bar that companies may be able to more easily chin. 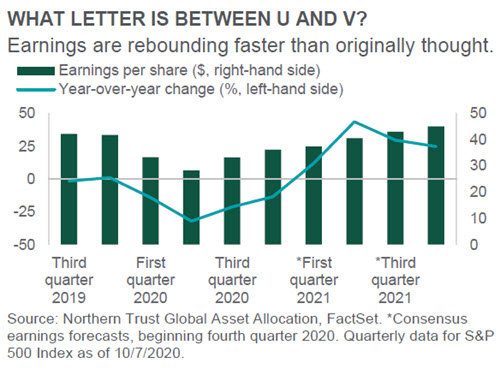 Often overheard recently: “Retail is dead and office space is no longer necessary; give me a reason to invest in global real estate at all.” Well, we can think of a few. First, the fact that the pandemic has impaired retail and office property values is the world’s worst-kept secret. Investors quickly priced this in. Retail property prices as a percent of net asset value (NAV, effectively the property appraisal less outstanding debt) have fallen from 84% pre-virus to 71% today; office properties have fallen from 93% to 76%. While these properties are worth less, prices reflect that.

Second, global real estate is more than just office and retail. Some sectors, such as industrial (think distribution centers), have done just fine. Though – similar to retail and office – the markets quickly priced this in too (currently valued at 127% of NAV). Finally, global real estate offers income and diversification given higher yields and different return drivers than broad equities, respectively.

Bottom line: Global real estate still warrants a strategic allocation in investment portfolios. We are tactically equal-weight given current uncertainty. We will be paying close attention to “return to office” dynamics as well as how easily retail – and other impaired – properties can be repurposed to something more economically relevant. 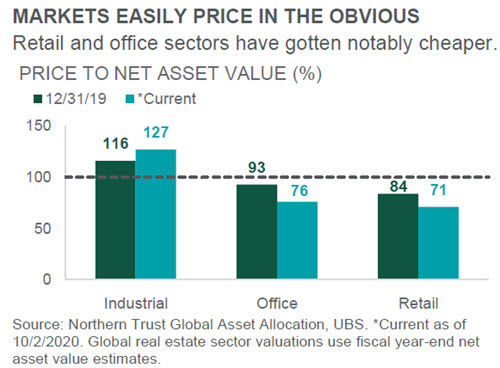 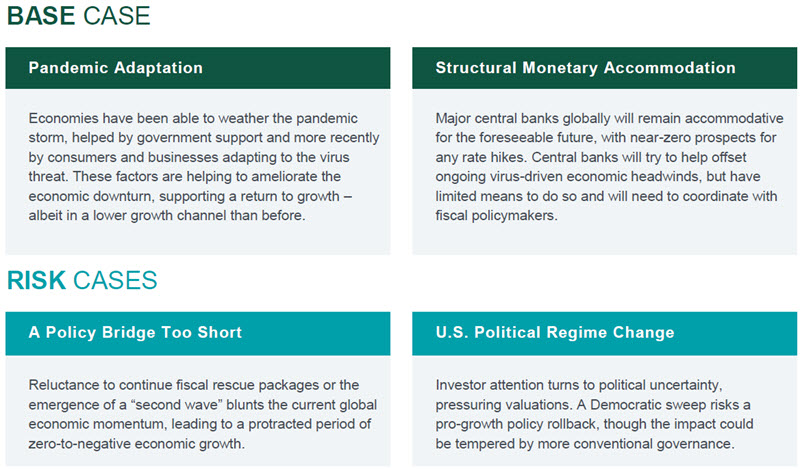 Jim McDonald is an executive vice president and the chief investment strategist for Northern Trust. He is responsible for overseeing the strategic and tactical asset allocation policy for our institutional and wealth management clients globally.
READ BIO
;