Keep up with how the latest headlines moved markets, and what’s up next.
SUBSCRIBE NOW
Investment Perspective, January 2021
January 20, 2021
PRINT

We increased our allocation to equities outside the U.S. as economies hit hard by lockdowns stand to gain from momentum with the COVID-19 vaccine.

A lot has transpired over the last two months, most importantly in the health and political arenas. Amidst another surge in COVID-19 cases globally, we are seeing more contagious strains emerge and some hospital systems stressed to capacity. Yet the financial markets have focused on the very positive vaccine news that started emerging in November, with multiple highly effective vaccines being distributed throughout the world and others likely on the way. The results of the U.S. presidential election in early November appeared to show a divided government outcome, but Democrats won both seats in the January Georgia Senate runoff, leading the party to a razor-thin majority in the Senate (through the vice president’s tie-breaking vote). While this does increase the Democrats’ flexibility to govern, we expect flexibility to be limited due to political constraints in both the Senate and House of Representatives.

Financial markets have embraced these developments, with the S&P 500 rallying 13.5% while the Russell 2000 index of small cap stocks rallied an impressive 26%. Alongside the jump in risk assets has been a rise in interest rates, noticeably tied to an increased expectation for inflation (see below). We note, however, that the rise in rates has been primarily a U.S. phenomenon, and real rates (most important for growth) remain solidly negative and stimulative. While some economic data has softened a bit of late, our base case of Pandemic Adaptation still holds as companies adjust to new ways of business. We upgraded our outlook for European growth last month, as the region’s services sector has been particularly hard hit by lockdowns and stands to benefit from reopening over the next year.

We expect the economic reopening story to be more impactful to the economy and markets over the next year than political developments. As vaccine momentum increases, we expect our other base case of Market Laggard Relief to unfold as those areas hit hardest bounce back. As a result, we increased our exposure to equities outside of the U.S. in our global policy model this month, funded by a reduction in investment grade bonds. Our risk case of Stuckflation Tested – and Fails contemplates the potential for a sustained cyclical rise in inflation, which could pressure interest rates higher.

Overall, we remain constructive on risk taking over the next year as we expect a strong economic recovery to support financial markets, especially in the context of our expectations for restrained inflation and continued easy monetary policy.

U.S. real yields fell deeper into negative territory while inflation expectations increased and the nominal curve steepened. The recent rise in nominal yields is largely comprised of increasing inflation expectations in the U.S. Although base effects will optically boost near-term inflation, structural challenges should continue to hold core inflation below the Federal Reserve’s 2% target. Fiscal spending may accelerate under the now Democratic-controlled Congress, but majority margins remain slim enough to serve the check-and-balance dynamic.

The near-term U.S. growth outlook has improved; low global yields, technological changes and aging demographics will contain the resulting interest rate rise. Nominal German 10-year Bunds are currently -0.5%, putting the real yield at -1.6%. U.S. nominal and real rates are much more attractive at 1.1% and -1.0%, respectively. Interest rates globally are closer to that of Germany than the U.S. We expect this rate differential to attract non-U.S. investors, even if they have to take on currency risk to get it. Beyond gravitational forces, the output gap, political uncertainty and the risk of a virus mutation that vaccines don’t cover should put a lid how high rates can go. For the 10-year Treasury, we don’t think that lid is much over 1%. 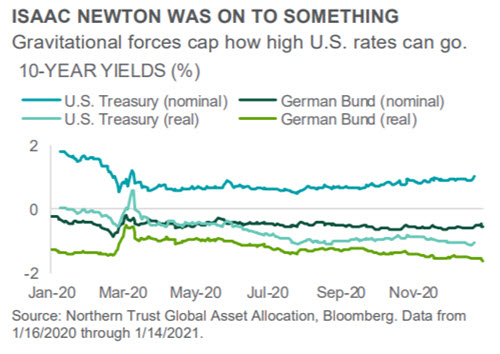 Corporate health improved throughout the balance of 2020 and the 2021 outlook looks bright. Management teams used strong market conditions to improve their balance sheets by refinancing near-term maturities and improving liquidity to manage through potential disruptions from more economic shutdowns. Credit fundamentals have improved significantly – and the deceleration of rating downgrades, paired with a gradual increase in upgrades, has put the upgrade-to-downgrade ratio near even (see chart). December saw 24 issuer downgrades, compared to an average of 32 per month over the past six months and a total of 348 downgrades in March and April. There were 23 upgrades in December, leading to almost a one-to-one ratio of upgrades vs. downgrades for the month.

The upgrade-to-downgrade ratio has consistently improved from April lows, and on a trailing 12-month basis the ratio is on pace to move above 100%. Additional fiscal stimulus enacted in December, combined with the rollout of COVID-19 vaccines, suggests gains in economic activity can be sustained – and, by extension, further improvement in credit fundamentals. This implies that the upgrade-to-downgrade ratio can continue to climb higher in the year ahead, which should be supportive of high yield valuations. 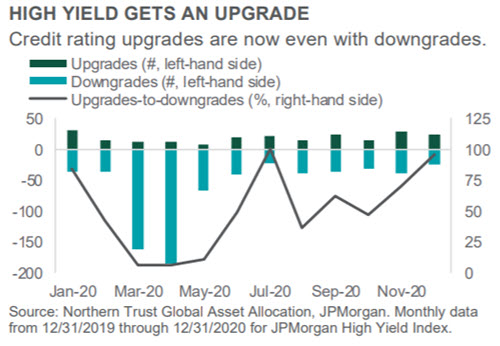 Global equities continued higher over the past month, reflecting continued optimism on the economic outlook as vaccine availability improves – and is still supported by accommodative central banks and fiscal stimulus. Over the past few months, the U.S. has begun to relinquish its leadership position in global equities, reflecting some catch-up of non-U.S. assets. U.S. earnings proved more resilient than non-U.S. markets during the pandemic, reflecting the benefits of secular winners in big tech growing through the turmoil. But, in exiting the pandemic, we see more developed ex-U.S. equities outperformance as the relative performance improvement outside the U.S. appears durable over the intermediate term.

From here, we see cyclical companies showing better earnings growth as conditions normalize. This supports our preference for developed ex-U.S. equities, as they have greater concentration of cyclical companies. We continue to believe U.S. valuations are justified given our expectations for economic growth, earnings improvements and low rates. With that said, we find the incremental risk-to-reward to be more favorable outside of the U.S. given better relative valuations and earnings growth. 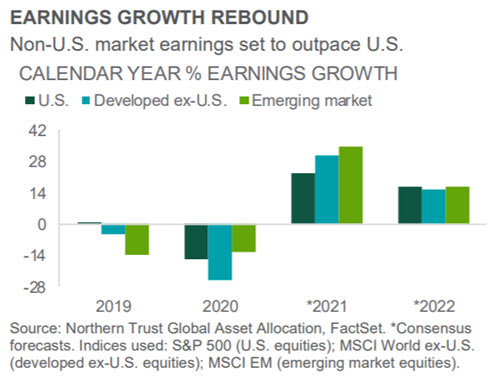 We’ve oft noted the protection natural resources (and listed infrastructure) can provide against unexpected inflation. You’ve had to trust us on this one – as no real threat of inflation has emerged in the past decade. But, in early 2021, we may be seeing the beginnings of our Stuckflation Tested theme. Market five-year inflation forecasts have risen from as low as 0.2% to their current 2.1% level (as judged by five-year breakeven rates, which equal the difference in yield between real and nominal bonds). And investors’ inflation concerns have continued to grow in the early days of 2021 – as questions grow around what will happen when the trillions of monetary and fiscal dollars join forces with an anticipated economic growth spurt.

Year-to-date, our real assets have responded mostly as expected. Natural resources have blown the competition away, easily outpacing the broad global equities. Listed infrastructure, while lagging global equities slightly, has outpaced global real estate; we would expect this too, given listed infrastructure’s greater sensitivity to inflation. Of all the real assets, we like listed infrastructure the most. It provides a decent yield, has cyclical potential (pipelines, railroads, sea/airports) and also provides some inflation protection should our risk case of higher inflation take hold. 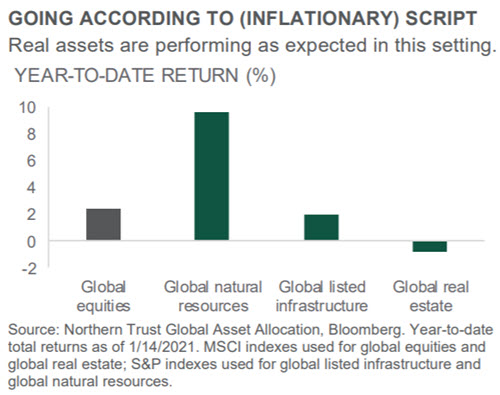 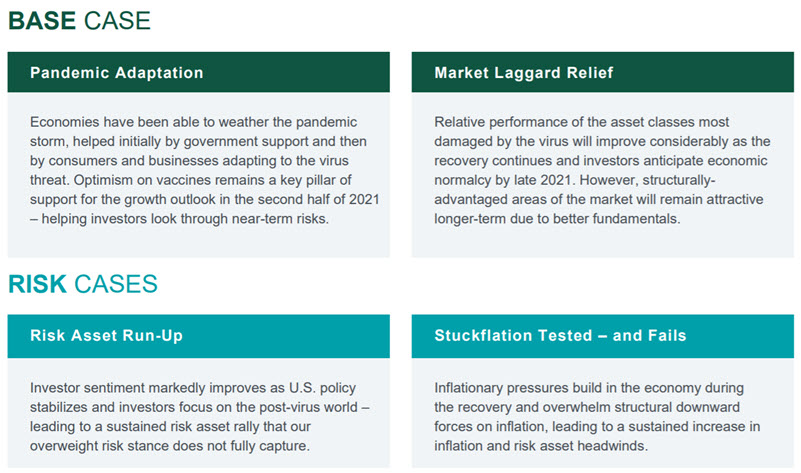