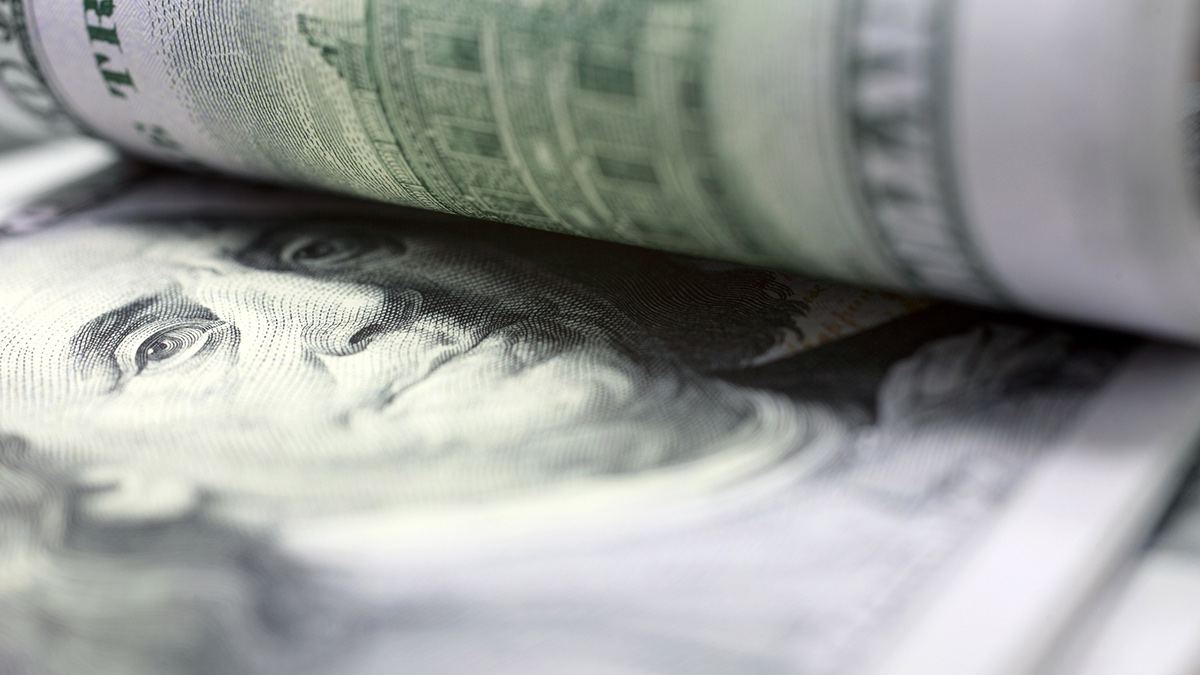 To bring things back into balance, the world’s governments are increasingly contemplating tax increases of various kinds. But as they do, they’ll need to consider cooperating with one another.

In the United States, the Biden administration is seeking to finance its $2.3 trillion American Jobs Plan through higher corporate taxes. The proposal includes an increase in the federal corporate income tax rate from 21% to 28% and reduced incentives to register corporate headquarters or intellectual property overseas. The U.K. has also announced a gradual increase to its corporate tax rate from 19% to 25%, starting in 2023. The risk associated with raising taxes, however, is the prospective loss of corporate headquarters, plants, and operations to other jurisdictions. 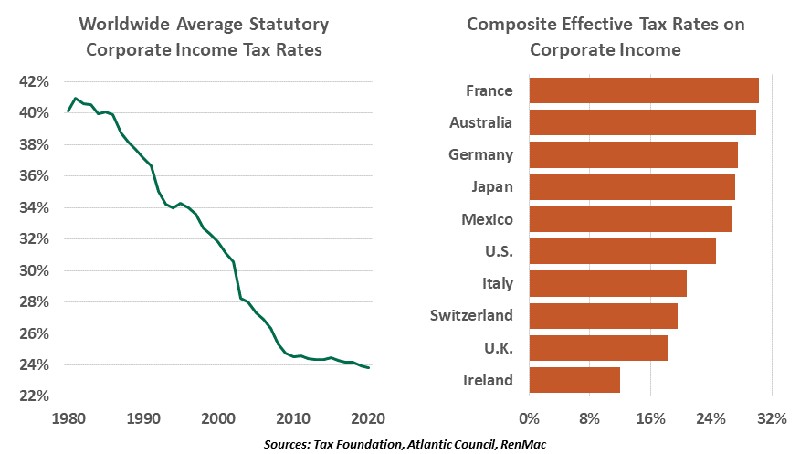 For the past four decades, nations have used corporate tax cuts to compete against one another for corporate investments, leading to what U.S. Treasury Secretary Janet Yellen has called “a race to the bottom.”  Global average statutory corporate tax rates declined from 40% in 1980 to around 24% in 2020. By region, Europe has the lowest average corporate tax rate at around 19%, followed by Asia (average 21%), the Americas (27%), and Africa (28%). There is a wide divergence within Europe, with Ireland’s 12.0% effective rate at one end and Germany’s 27.5% at the other.

In theory, lowering corporate tax rates can fuel investments and productivity gains, in turn boosting economic growth and standards of living. However, these gains are often temporary in nature, lasting for only a few quarters. The tax cut under the previous U.S. administration serves as a good example. Lower corporate taxes provided only a transient lift to economic growth and investment, and households did not see the promised increase of $4,000 to average incomes.

To limit international competition on the basis of tax rates, Secretary Yellen has called for a global minimum corporate tax rate. Higher-tax countries like France, Australia and Japan could benefit from such a proposal, but the competitiveness of smaller economies with lower corporate tax rates could take a hit. Ireland’s low tax regime has been a key part of its industrial policy and has helped attract billions of dollars in investments from multinational corporations. 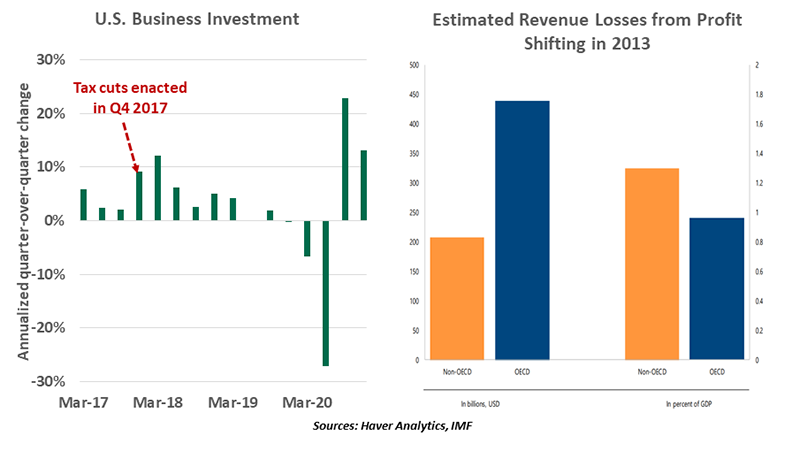 International corporate taxation has long presented a challenge for governments around the world. Evolving structures of global firms have made the task even more difficult. Subsidiary setup is the most common method of minimizing taxes: a company establishes an office in a tax haven, channeling revenue to that location even though it has few or no employees there. Tax inversion is another: companies restructure so that their headquarters is in a low-tax jurisdiction even though the majority of their facilities and employees are located elsewhere.

The Organization of Economic Co-operation and Development (OECD) has been leading discussions aimed at curbing the ability of global companies to arbitrage differences in tax rates. The initiative aims to close loopholes in global rules that let corporate profits disappear in one jurisdiction and re-emerge in tax havens or lower tax countries where little or no economic activity takes place. The U.S. administration’s call for corporations to pay taxes to governments based on their sales in each country has reinvigorated the debate.

Highly profitable tech companies have been facing increasing scrutiny from tax authorities for using a variety of structures to diminish (or eliminate) their tax liabilities. According to International Monetary Fund estimates, the use of tax havens costs world governments between $500 billion and $600 billion annually in lost corporate tax revenue. Discussions have been ongoing for years at the OECD on tax matters related to the digitalization of the economy.

Frustrated by a lack of global agreement to remedy the situation, some countries (like the U.K. and France) have already launched unilateral digital services taxes (DST). A DST is a tax on domestic revenues, not profits. Levied only on revenues above a certain threshold, this tax is aimed at a small number of big tech corporations, most of which are based in the U.S. The movement to implement DSTs has raised concerns of double taxation and is inconsistent with current international tax norms. With more countries likely to implement DSTs, this tax has not only emerged as a source of transatlantic tensions but a new trade war flashpoint.

Harmonizing international taxation will require difficult multilateral negotiations and unprecedented international cooperation. Lessons from the EU’s Economic and Monetary Union suggest that the path to a global agreement won’t be easy: while unifying many policies, member nations were allowed to set their own corporate income tax rates. And Ireland’s subsequent success with low taxes shows there will be rewards if the policies leave any opportunity for defectors.

Nonetheless, the cost of coping with the pandemic will leave governments around the world thirsty for additional revenue. And while they may not like the idea of negotiating away their sovereignty over tax systems, the prospect of additional liquidity may be too tempting to resist.

Members of the Federal Reserve have consistently said they expect a “broad and inclusive” recovery in labor markets before they will consider raising rates. This messaging stems from a desire to replicate the success seen in the long pre-COVID growth cycle. As prosperity continued, employment and wages improved for lower wage earners and racial minorities, who are often the last to feel economic gains. Gauging progress towards this worthy goal will require a comprehensive view of employment data.

A bit of background is in order. A person is in the labor force when either working or actively looking for a job. The headline unemployment rate (U-3), is simply the number of job seekers divided by the total labor force. By that measure alone, the recovery has been remarkable, with U-3 falling from a record 14.8% in April 2020 to 6.0% in March. But that broad trend obscures important details.

People leave the labor force for any number of reasons: some are waiting for their employers to reopen, some are concerned about contracting or communicating the virus upon returning to the workplace, some lack reliable child care, and others are simply comfortable living on unemployment insurance. Longer-term, it would be ideal if these workers rejoined the labor force.

To capture these displaced workers, Fed officials have advised the use of measures like the labor force participation rate (LFPR) and employment-population ratio (EPOP) to assess the employment picture. The two measures are fractions of the total working-age population: LFPR is the proportion of individuals who are either working or seeking work, and EPOP is simply the share of individuals employed. Both have fallen and have a good deal of ground to recover. As of their most recent readings, LFPR is at a level last seen in 1976, and EPOP has matched levels seen in the 1981-82 recession.

Secondly, all of these measures are summaries of a massive, diverse population. They obscure stories that are specific to industries and races, which the Fed is now tracking more closely.

The recovery has been uneven across sectors and roles. The pandemic drove up employment in sectors like warehousing and courier services, while workers in hospitality and restaurants remain displaced. Regardless of industry, lower-wage workers have borne the brunt of the downturn. The New York Fed found that low-wage workers (earning up to $30,000) have suffered the worst and most persistent job losses. An inclusive recovery is needed to bring them back.

A further limitation of the U-3 rate is that it treats all jobs equally. But some of those at work are employed part-time for “economic reasons,” meaning they cannot find full-time jobs or have had their hours reduced to part-time status. The Fed will be tracking trends on this level: they will be hoping for more permanent positions and more hours available for employees to work. 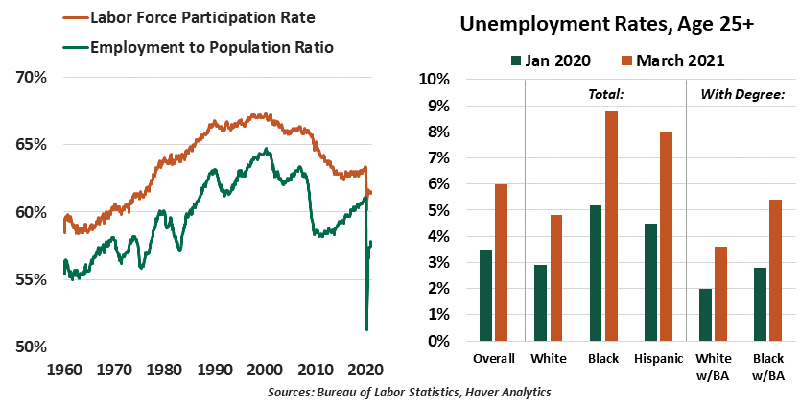 Unemployment by race reveals other trends that merit attention. Inequity has long been a challenge for the U.S. labor market, with Black and Hispanic unemployment rates consistently higher than those of white workers. Through 2019, the gap was narrowing, serving as evidence of the benefit of accommodative monetary policy. Today, however, the gap has widened again.

Other metrics will also factor into the Fed’s consideration. The quits rate measures voluntary separations; people quit when they find a new job or are confident they will find a new job, often at a higher wage. The Fed also tracks wage growth through metrics including the employment cost index (ECI), which tracks the total cost of employment, including wages and benefits. In a well-functioning labor market, workers should see gradual and steady gains in compensation.

Taking these measures together, it’s clear that the U.S. labor market stands far short of its potential. The Fed will not change policy until more of the dials are in green territory.

It’s difficult to imagine what life was like before microchips. We had to dial our own telephone calls, turn keys to enter and start our cars, and answer trivia questions by looking up facts in an almanac. Video calls were the stuff of cartoon fantasy, navigation was done with paper maps, and being wired had an entirely different connotation than it does today. 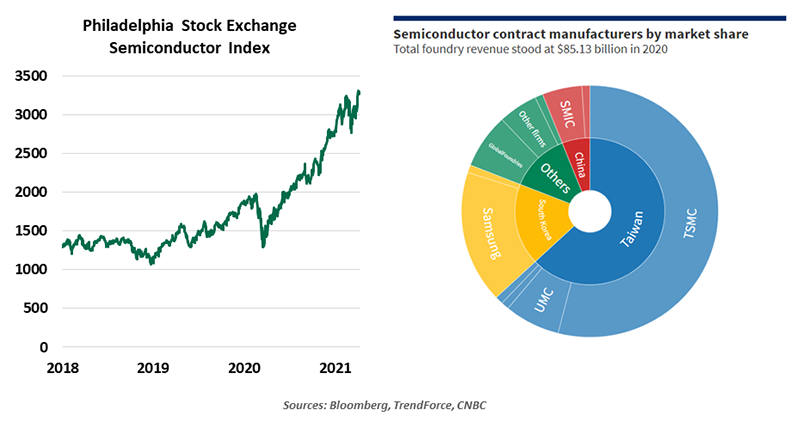 The proliferation of smart devices and processes has made the world tremendously dependent on microchips. Unfortunately, the COVID-19 pandemic has caused a substantial chip shortage, which is hindering the production of the goods that rely on them.

As always, shortages are caused by two things: demand and supply. With many workers and learners confined to their homes, sales of personal computers rose 11% last year. Server clusters had to be expanded to accommodate the explosion in video communication and e-commerce. The search for home entertainment raised demand for game consoles and streaming devices.

On the supply side, more than half of the world’s microchips are made in Taiwan. The island’s factories have not been able to scale up capacity, and have faced some weather-related constraints. Lead times for chip deliveries have jumped by two weeks in the last two months, reaching an all-time high of 15 weeks.

The shortages and delays have impaired downstream processes. Auto manufacturers have had to shut down assembly lines during the midst of a sales boom as they await critical components. Production of laptop and tablet computers has also been reduced, at a time when they are most needed. Microchips are also essential components for the defense industry, and shortages are considered a matter of national security.

Because constructing chip-making facilities is expensive, manufacturers have historically chosen to concentrate production. But with Taiwan in the middle of tensions between China and the U.S. and bottlenecks disrupting global supply chains, a number of countries are seeking to build additional capacity. Unfortunately, new microchip plants are major capital investments that take years to complete.

The microchip sector is another in a long list of areas where the pandemic has wrought havoc with global supply chains, and it may be a while before order is restored. You might want to order an almanac, just in case.