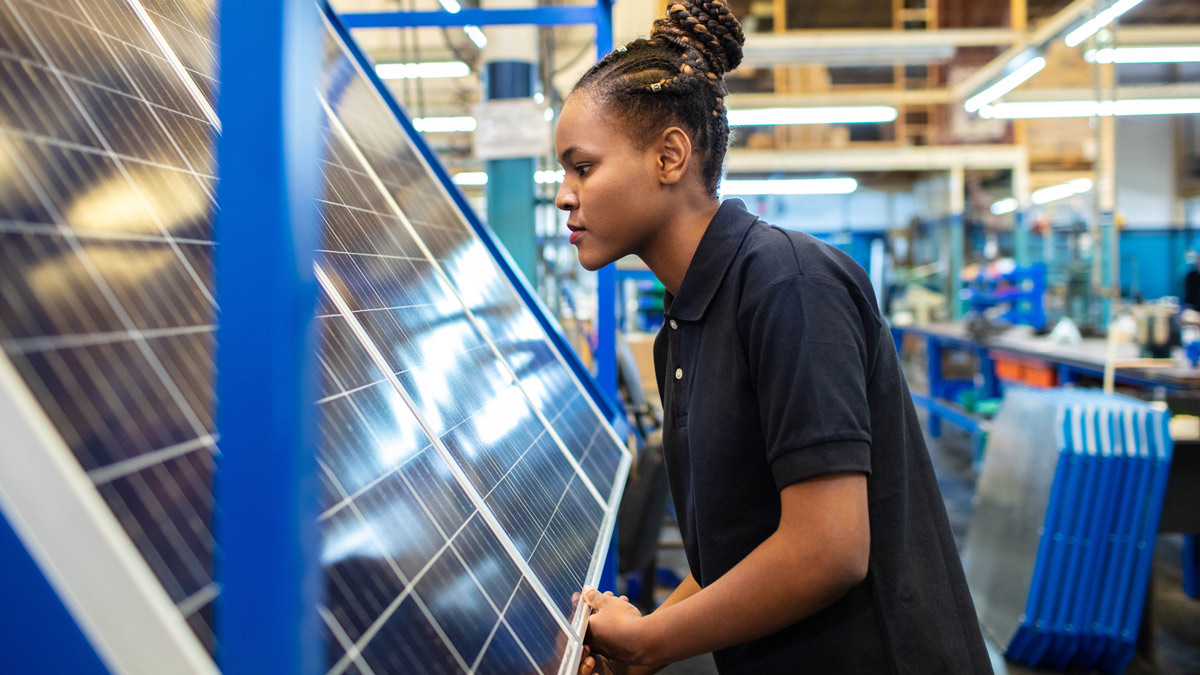 My first job after college was in the planning department of a major retailer.  When I needed data to assemble a sales forecast, I was told to inquire with the accounting department.  Entering the area was like passing through a time warp: rows and rows of people sitting at desks, smoking and making entries in huge ledger books.  It took days, and half of my lung capacity, to assemble sufficient history.

By the time I left two years later, that room was empty.  A computer-driven general ledger had been introduced; the number of bookkeepers had been drastically reduced, and the nature of work for those that remained had dramatically changed.  I could write queries on a computer terminal that would harvest information almost instantly, saving me time and allowing a little more breathing room.

I often wondered where all of the accountants had gone.  Some retired; back in those days, pensions were generous and fully funded.  But others learned how to use spreadsheets and became financial analysts.  That kind of transition happens frequently as work evolves; adjusting successfully is critical to economic performance. 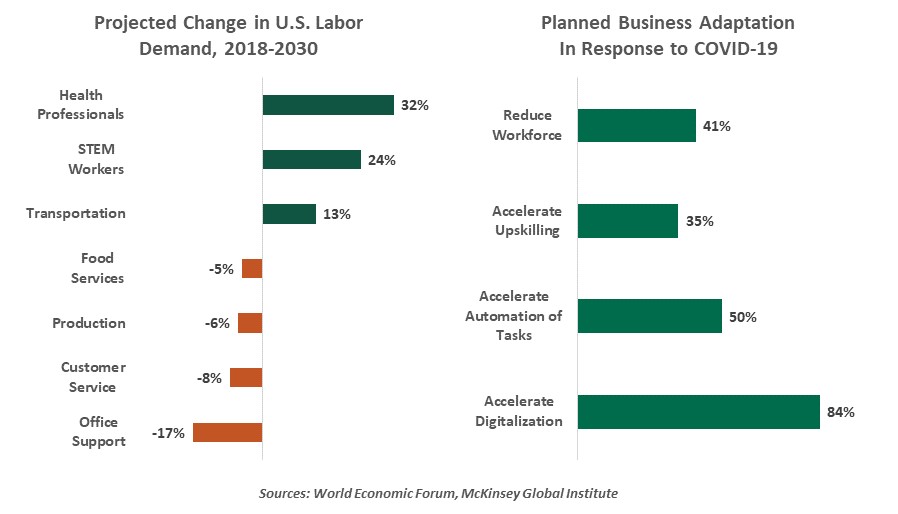 Labor markets were struggling to keep pace with change before the pandemic, and change is likely to accelerate as the pandemic passes.  Questions about how our economy can adapt, and who should pay for it, have moved front and center.

Pre-industrial economies functioned on basic skills.  While there were a handful of experts in agriculture, navigation, metallurgy and other disciplines, the vast majority of workers performed physical tasks that required little training.  Workers left the workforce when they were too old or infirm to keep up with the work; retirement was not a common practice, with the end of natural and working lifetimes closely associated.

Physical, repetitive labor has long been vulnerable to obsolescence at the hands of technology.  But in the past two decades, a broadening range of service occupations have also been affected.  Studies have shown that components of service jobs, and even the jobs themselves, are being automated at an accelerating rate.  Mismatches of skills between workers and open positions have been proliferating.

The pandemic has added momentum to the transition.  To limit contagion, assembly lines were thinned and basic service workers in direct contact with the public were furloughed as COVID-19 spread.  While many of these roles will come back as public health improves, many may not: according to PwC, 40% of firms surveyed are accelerating adoption of labor saving technology in response to the pandemic.  Some workers displaced by COVID-19 may never get back to the jobs they once held.

The longer a worker is separated from the labor market, the harder it is to get back in.  Fed officials have called this “scarring;” scholars call it hysteresis, a term taken from physics that describes systems that never return to normal after a shock.  To avoid this outcome, policy makers must act with urgency to keep workers connected. 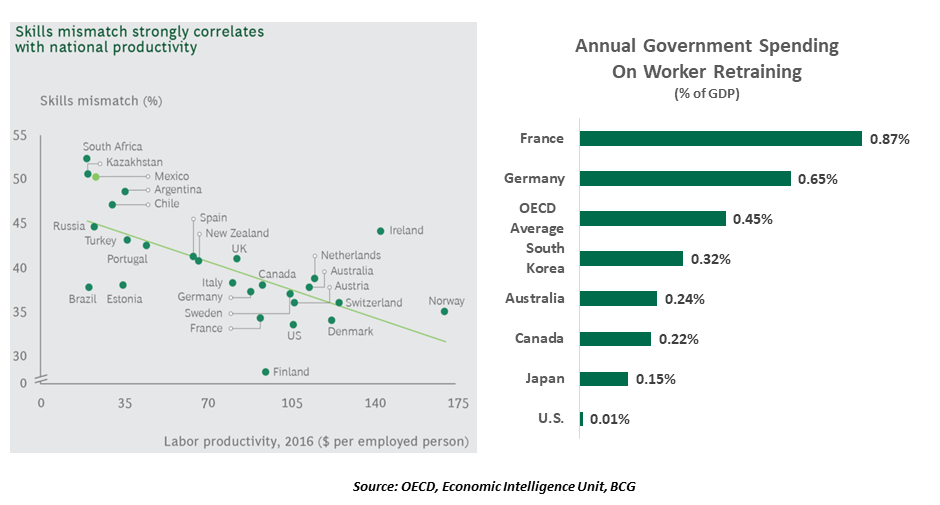 Further, persistent skills mismatches can limit productivity and economic growth.  The World Economic Forum has estimated that closing those gaps could add $6.5 trillion to global gross domestic product (GDP) over the next decade.  Conversely, failure to help workers adapt will accentuate and perpetuate economic inequality, increase dependency on government support programs, and raise the possibility of political instability.

Experts generally agree that retraining needs to be a central element of the effort.  But from there, opinions diverge on what kind of training should be offered, who should deliver it, and who should pay for it.  In some parts of the world, governments take the lead on this front, but a number of studies have shown that these efforts can be inefficient.  Many government programs are rooted in the industrial era, and have not pivoted effectively to address the disruption currently affecting service occupations.

In the private sector, frequent job turnover has left many companies reluctant to invest in training.  Workers today have more responsibility for initiating their own re-education and paying for it.  They are often unwilling to undertake new training unless they are guaranteed a job upon completion; employers are unwilling to offer a job until skills have been enhanced.  That creates a difficult chicken-or-egg situation.

In the U.S., the Biden administration has included $100 billion for worker retraining in the American Jobs Plan (AJP).  As part of efforts to invest in social infrastructure, the money would be used to expand apprenticeships and reduce the cost of attending community colleges, which play a central role in job retraining.  In the years ahead, the administration aims to provide transition assistance to workers who might be displaced by efforts to address climate change.

Passage of the AJP is by no means assured.  Retraining results are a combination of policy and personal responsibility; if workers fail to access programs or fail to follow through, returns on public investment will be substandard.  This is the pattern shown by the Trade Adjustment Assistance program, which was intended to help workers affected by expanded globalization.  Experiences like this have led some legislators to sour on government-sponsored solutions.

But leaving everything to the private sector was not working well prior to the pandemic, and will likely not re-skill the population sufficiently after it is over.  Longer-term, the service and knowledge-based economies in developed markets require skills renewal at regular intervals.  If societies can’t find a formula that supports recurring investment in human capital, workers may find themselves obsolete long before their careers or their lives are over.

After harvesting data from the old ledger books, I would key it manually into an Apple II computer and save it onto a floppy disk.  The equipment was cutting-edge at the time, but is now the stuff of museum exhibits.  We can put outmoded technology on display for people’s amusement, but there is nothing amusing about allowing people to become outmoded.  We have to do better.

The pandemic has taught and reinforced many lessons.  For instance: never celebrate a win before the contest is over.  The sports-loving nation of India is learning this lesson the hard way.  Its opponent, the virus, has made a comeback with renewed vigor.

Just a few weeks ago, India’s efforts to contain the virus were lauded by international authorities, and, of course, the Indian government.  The nation certainly took its lumps along the way, with a sharp recession during the first wave, but the worst appeared to be over.  Unfortunately, a lethal second wave is cascading across the country.  New cases have grown geometrically and now exceed 300,000 daily; daily deaths exceed 2,000, which is certainly an underestimate; and the country’s positive test rate is rising faster than that of any other nation.

Despite being the world’s largest vaccine manufacturer, India’s inoculation drive has been progressing slowly, with only 8% of the population covered thus far.  At the prevailing vaccination rate, India may not reach 70% coverage by year-end, leaving it vulnerable to additional outbreaks.  Unlike the first wave, the country is now seeing a massive spike in cases in rural areas and its tier-two and three cities.  Many villages lack basic infrastructure like adequate drinking water and uninterrupted power supplies, so one can easily imagine the state of healthcare in those areas.

Experience from COVID-19 shows that crises like these can easily overwhelm even the best medical systems.  In India’s case, the crumbling health infrastructure reflects decades of neglect.  India’s government healthcare spending has long lagged its peers.

Despite the current outbreak, the central government has virtually ruled out a nationwide lockdown like the one witnessed last year.  Various state governments have started locking down major urban centers to break the transmission chain.  The measures are more targeted: they focus on services such as leisure and recreation, with limited or no restrictions for agriculture or industrial activities.

As a result of this lighter touch, the direct economic hit from the second wave will likely be less severe than the first. That said, the impact will be significant.  Fresh restrictions will be particularly damaging for consumer sectors, which were only beginning to catch up with the recovery in manufacturing and investment. 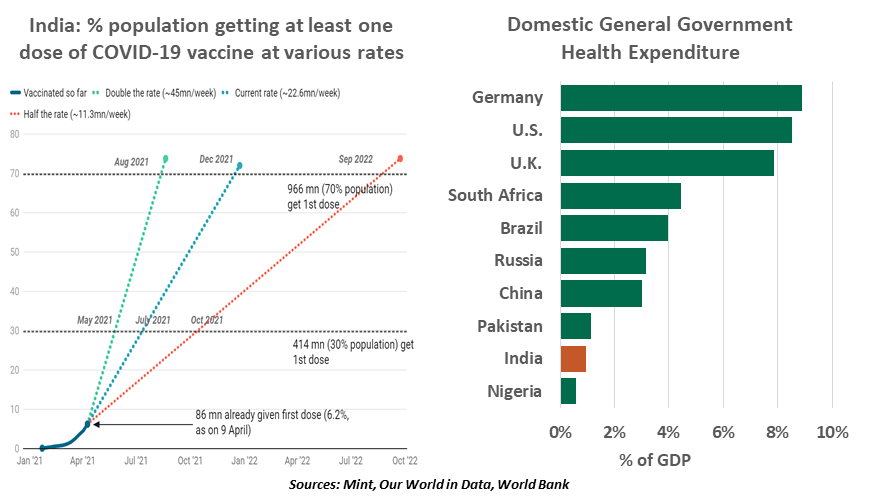 Unemployment was already a major economic issue before the pandemic hit; labor markets are set to face another round of disruption as daily-wage earners and low-paid workers are starting to flee the cities.  According to a Centre for Monitoring Indian Economy report released last September, approximately 21 million salaried jobs have been lost.  Income inequality, already the highest among major economies, could worsen further; the pandemic pushed 75 million people into poverty in 2020.

Economic data has yet to show a significant impact from rising infections.  Goods & Service Tax receipts, retail payments, and auto sales continued to grow robustly last month.  However, there are early signs that growth has started to stagnate.  Both manufacturing and services surveys softened in March.  Electricity consumption, the earliest data available for April, also fell in the first two weeks of the month.

Monetary policy remains accommodative in India.  But the absence of significant direct fiscal support, partly due to financial constraints, could place India’s economic recovery at risk.  Leaving businesses open to sustain commerce, however, could place India’s public health at risk.

The next few weeks will be critical, as the renewed COVID-19 surge challenges India’s resolve.  Policymakers will have to ensure that defending economic vitality does not lead to an even higher tally of lost human lives.

This year, we can dispense with the usual tropes about the economic signs of spring.  While it is nice to see the slow emergence of green shoots, what is happening in our flower beds is no metaphoric match for the rapid growth we are witnessing in business activity.

Looking around the U.S., indicators are bursting through recent peaks.  Starting in late March, coincident with many spring break weeks, airport passenger screening volumes reached their highest levels since the 2020 shutdown.  Though business travel may be slow to recover, leisure travel is thriving.

People are returning to restaurants, as well.  Reservation platform OpenTable’s statistics show progress toward pre-pandemic levels of activity after a winter slowdown.  Tourist destinations like Miami and Las Vegas are leading the recovery.  OpenTable allows a global comparison: Australia’s cities appear to be thriving after a successful quarantine, while slow readings in countries like Germany tell a story of lingering lockdowns.

Small businesses are gearing up for additional business.  In its quarterly Economic Average report, consumer review site Yelp found resurgent reopenings of restaurants, bars and gyms.  Consumer search activity on the site bears out a shift in interests: group activities like boat and bus tours are getting clicks, along with child care providers as parents prepare to leave home again.  Meanwhile, some of last year’s hot retail items, like fitness equipment, have lost momentum. 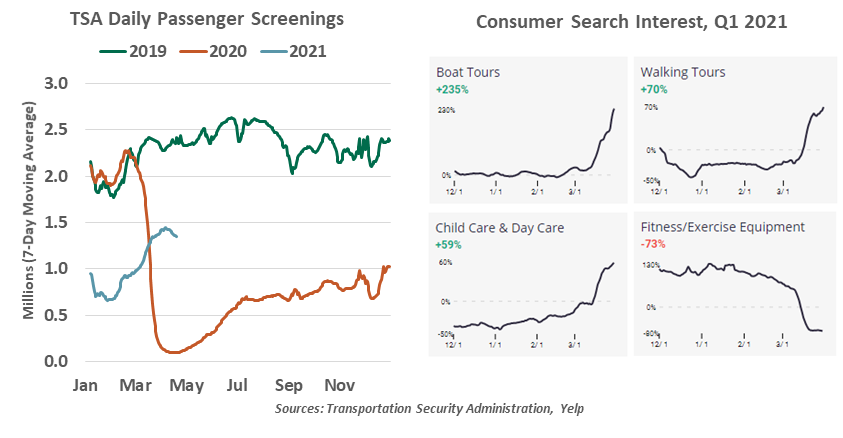 Spending patterns also show recovering activity.  Credit card usage tracked by Affinity Solutions showed that retailers have entered the year with strength, as consumers express pent-up demand and use their pent-up saving.  Of note, the category of hotel and food services is approaching a return to its normal levels after languishing for a year.

It is still too soon to say the pandemic is behind us: Variants are spreading, and sectors like international travel will be slow to rebound.  But we can see in the data, and in many of our communities, that consumers are ready and willing to help the recovery reach full bloom.

Spotlight on trade: What it means for the election, displaced workers, and the U.S.-China Phase One deal.