The BBB Breaks Down 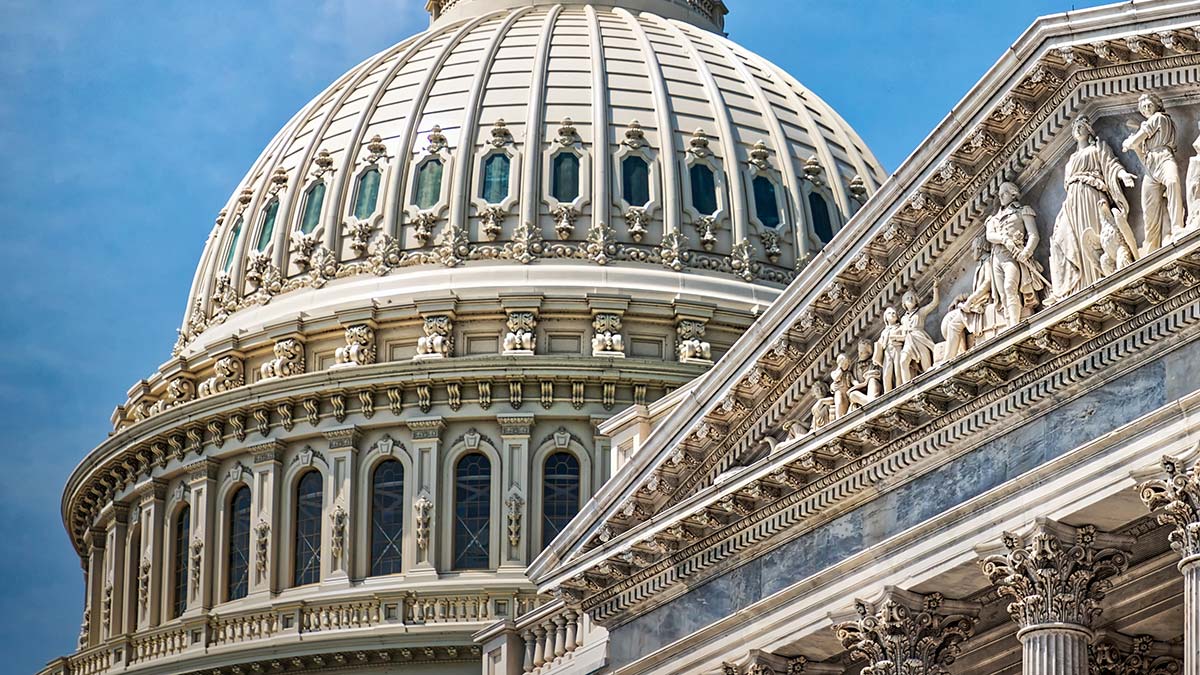 Editor’s note: This is our final commentary of the year. For those celebrating holidays this month, warmest wishes from all of us for a joyous season shared with family and friends.

One of our top themes of 2021 was the return of big government. The pandemic has required publicly coordinated solutions, which some have suggested could be productive in other arenas. The accumulation of deficits and debt to finance these endeavors no longer appeared to be a constraint.

Late last week, the limitations of this fiscal philosophy became apparent. The Build Back Better (BBB) initiative, a centerpiece of the Biden administration’s social agenda, hit a legislative wall. And while one senator has been credited (or blamed, depending on your perspective) for the blockage, the past few weeks have raised a number of difficult questions about public budgets.

The BBB included a wide range of measures covering day care, education, climate change and tax credits for parents. Financing was to come from debt and a series of revenue enhancements.  The merits and economics of the BBB have been hotly debated, with impressions falling largely along partisan lines. But it was a non-partisan analysis by the Congressional Budget Office (CBO) that may have sealed the initiative’s fate.

Fiscal measures in the United States that are passed through the budget reconciliation process are limited by the Byrd rule, which places boundaries on deficit spending during and after a ten year window following adoption. Over time, legislation sponsors have used a range of budgetary tricks to work around this limit; among the most common of these are making generous assumptions about incremental economic activity that will be generated and sunsetting key components of bills after only a few years. 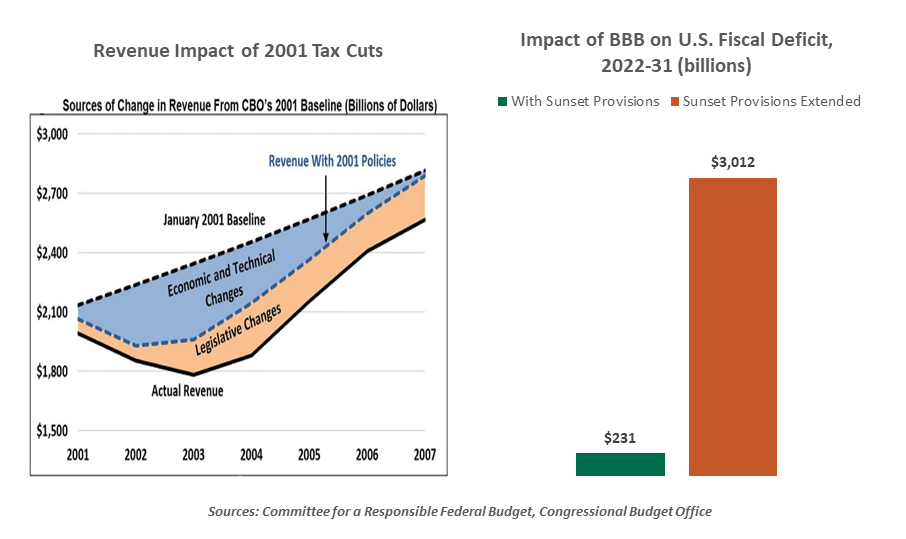 The latter tactic creates “cliffs” in programs that are hard to stomach. Providing two years of funding for a new day care program, for example, can leave families in the lurch when the program ends. Closing down a tax benefit after a short period creates a sudden increase in taxes when the window closes. To avoid these abrupt transitions, Congress often extends initiatives for longer than initially intended; this increases their long run impact.

This was the case with the 2001 and 2017 tax cuts. Retrospective analysis has found that deficits were substantially higher than anticipated when these measures were passed, as growth fell short of projections. Concern about hindering the nascent economic expansion in 2010 led the White House and the Congress to extend several features of the 2001 bill; a similar decision will arise in 2025, when components of the 2017 bill are due to expire.

The BBB made extensive use of budgetary sleight of hand. A tax credit for children was set to expire next year; measures supporting child care and preschool were to sunset after five years. These measures are not intended to provide cyclical stimulus; they are aimed at long-term goals.  If the programs were ultimately extended, the impact on the national debt over the coming decade would be considerably larger.

The notion that the American public deserves an honest accounting of what is likely to occur should, hopefully, garner bipartisan support.  Only then can an assessment be made of whether the benefits justify the costs, and whether the additions to debt are sustainable.

While some members of Congress and the public have expressed concern over the expansion of debt and deficits since the pandemic began, investors have remained relatively sanguine. Despite substantial additions to the federal debt during the past decade and projections that call for more of the same in coming decades, long-term interest rates remain low. And real interest rates, which compare nominal rates and expected inflation, are deeply negative. 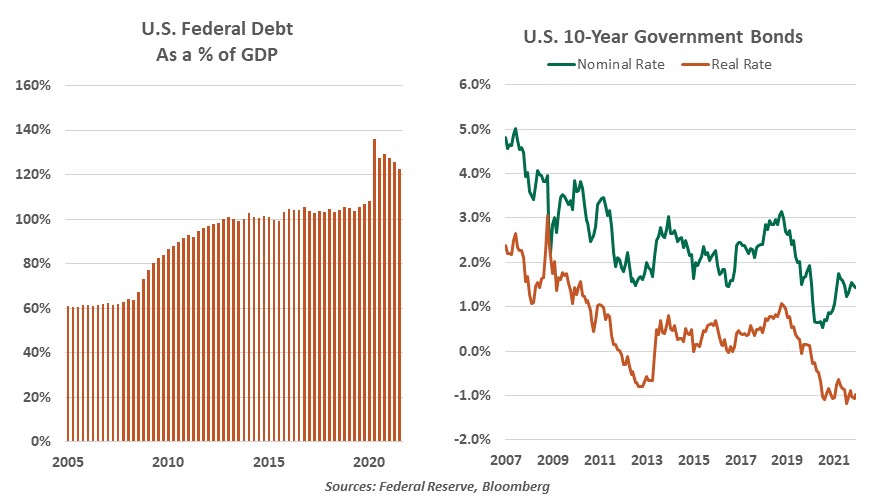 This seeming contradiction is one of the bigger mysteries in the current market landscape. Debt increases of recent magnitudes, even for a highly creditworthy country like the U.S., should prompt investors to ask for a little additional yield. The possibility that the government might try to inflate its way out of debt, or the (very minute) risk of a default, creates risks for bond holders.

To be sure, American nominal and real interest rates are higher than they are in many other developed countries. Global investors searching for the best yields while staying within the fixed income space still find relative value in Treasury securities.

Even though financing conditions are accommodating, the BBB may ultimately have been the victim of bad timing. Consider:

None of this is to suggest that any individual element of the BBB wasn’t worthwhile, either socially or economically. Supporters contended that the investments called for in the bill would produce positive increments for growth, and would head off more expensive solutions later on. But against the backdrop of current political and economic circumstances, these points of view were more difficult to advance.

The lesson of the BBB will be important for other countries to study. A number of other nations are looking to build new fiscal expansion on the back of successful pandemic support programs. But the appetite of the public and the markets for expansions of government may be finite. With so many big pieces of legislation already passed, the appetite for more has waned.

Supporters have vowed to bring a reformulated version of the BBB back to Congress in the new year. But with a host of other legislative imperatives and the onset of midterm election campaigns imminent, the path to passage is a very narrow one. The era of the open checkbook may be over.