Any surge in inflation will likely not last for long, but Italy's economic troubles and the shift in rental markets may endure. 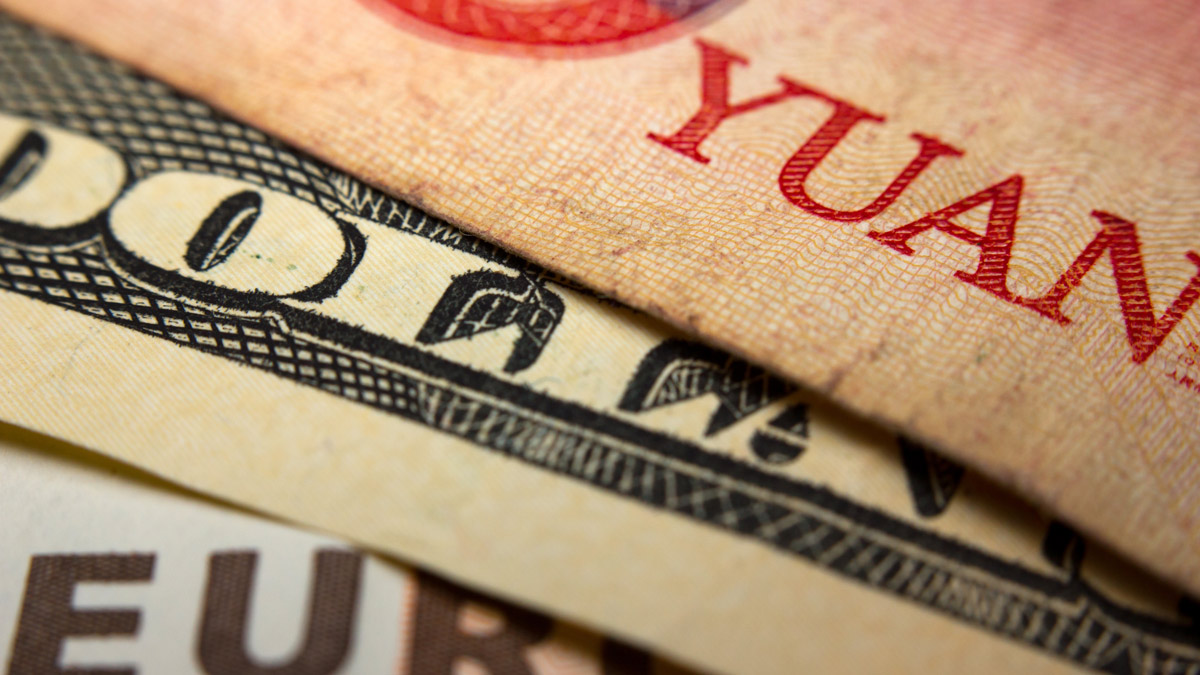 As we discussed in last February’s piece entitled “Inspecting Inflation,” a series of cyclical and secular factors have conspired in recent years to slow increases in the prices of goods and services. No one misses the inflationary spirals of four decades ago, but today’s low inflation has created its own set of problems.

That article was written just before these pages started filling with analysis of the COVID-19 pandemic. The global economy suffered a sudden and severe recession in the second quarter of 2020, as public health restrictions limited commerce. The emergency caused supply disruptions that prompted some prices to jump temporarily. But more lasting damage to aggregate demand eventually caused brief periods of deflation in most major countries last spring.

To address the economic malaise and push inflation towards its targeted levels, central banks around the world pulled out all the stops. Countries that had positive interest rates saw them brought down to just above zero. Unfortunately, interest rates were already relatively low coming into the pandemic, so these steps did not provide sufficient stimulus.

To add impetus, central banks initiated or expanded quantitative easing programs. By purchasing immense volumes of securities, they swelled the sizes of their balance sheets. By the end of 2021, the U.S. Federal Reserve’s balance sheet is expected to approach $9 trillion, more than 40% of U.S. gross domestic product (GDP). For reference, the Fed’s balance sheet totaled around $800 billion prior to the 2008 financial crisis. 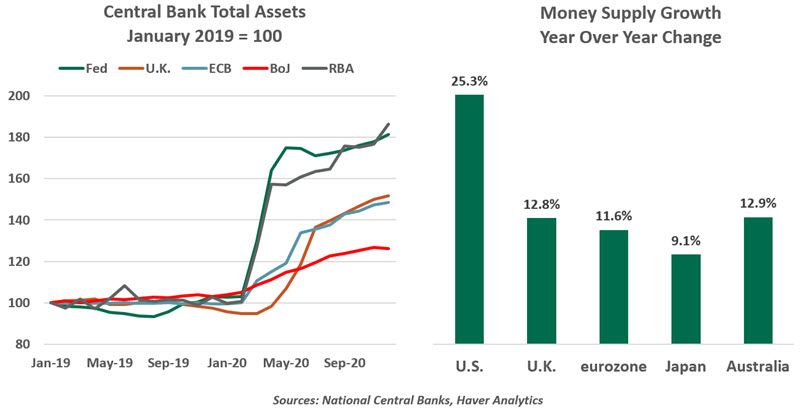 When central banks purchase securities, they pay for them by crediting accounts in the financial system. This action creates reserves, which begin circulating throughout the economy. The money supply around the world has consequently surged, unearthing unpleasant memories of the inflation of a generation ago.

The risk of economic overheating has prompted an increase in inflation expectations in many markets, and an associated rise in long-term yields. Market participants blame these developments on a “reflation trade."

“Forecasters have persistently overstated the risk of inflation.”

Today’s inflation fears are also founded on the potential for a surge in activity during the summer months, as advancing immunity to COVID-19 allows durable economic reopening. There is undoubtedly pent-up demand for experiences that have been risky during the pandemic, such as travel and restaurant meals. The means to sate that demand can be found in the form of excess saving and lots of extra credit in banking systems around the world. 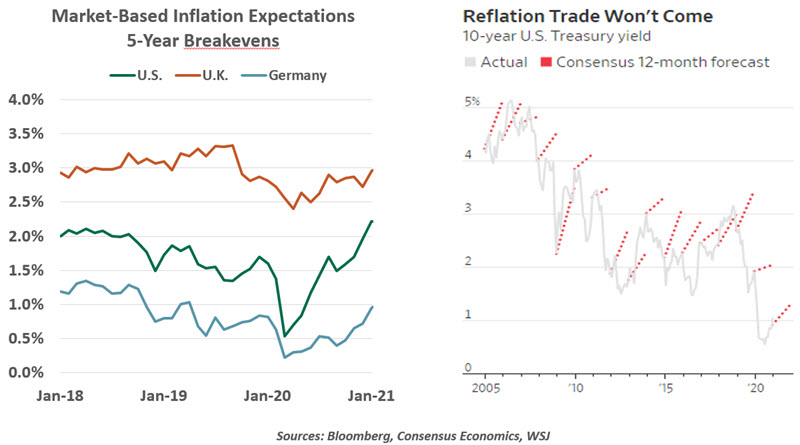 At present, there is substantial unused capacity in the global economy. Unemployment and underemployment are still at high levels, and manufacturers are not yet operating at pre-pandemic levels. Inflation typically results when economic resources are scarce, a state which we may not reach for quite some time.

As well, the secular factors that have governed inflation may actually become more powerful in the wake of COVID-19. Consumers have made more extensive use of e-commerce over the past year, limiting the pricing power held by firms. (Studies have shown a pronounced difference in inflation between products sold online and those sold through traditional channels.) And the pandemic has also created disinflationary pressure in two key areas:

Both of these items have high weights in consumer price indices.

A summer surge in demand could certainly stress inflation for a time. But the supply response would also be strong. An estimated 16,000 commercial aircraft have been grounded by carriers around the world, waiting to be called back into service. Servers and chefs laid off by restaurants will be called back to work as they reopen. While there may be some temporary bottlenecks in some areas, any burst in inflation is likely to be temporary.

This should be within the comfort zones of central banks, which would actually be delighted at the prospect of a little more inflation. In fact, the recent increase in inflation expectations isn’t altogether unwelcome, as it lowers the risk of deflation. The trick will be keeping these expectations, and the actual price level, within acceptable ranges.

“There are many reasons to think that inflation will remain under control.”

Some investors worry that the world’s central banks will lack sufficient resolve to pull back if and when conditions call for it. Political pressure to keep the spigots open could be intense: all of the borrowing undertaken by governments will not be sustainable unless central banks keep interest rates low for a very long time.

Tightening monetary policy when and if inflation becomes more threatening will not be easy. Arriving at that diagnosis and communicating it convincingly to markets and politicians will be challenging. But for now, central banks are not close to achieving their stated goals.

Fiscal and monetary support in the wake of the 2008 financial crisis was substantial and necessary. But it created considerable unease about the potential impact on inflation. Partly for this reason, some countries pulled back on stimulus too early, leaving them with an incomplete recovery and persistent disinflation.

While pandemic-era responses are much larger, so is the depth of the damage. The lessons of the last decade warn against fighting an inflation problem that might never materialize.

Political instability and economic troubles were among the factors that led to the fall of Rome in 476 AD. Roman history is at risk of repeating itself in the present day: Italy’s economy is struggling, and Italy’s prime minister resigned earlier this month. In its 75 years as democratic republic, Italy has had 66 governments, with each lasting for an average of a little over a year.

While Italy is no stranger to political disorder or change in governments, today’s turmoil is complicated by the pandemic. Italy entered the COVID-19 crisis on weak footing after witnessing its third recession in a decade in 2018. Over the past 10 years, Italy’s real annual output has grown by more than 1% only three times.

Italy has endured about 90,000 virus-related deaths (the highest toll in Europe) and its worst economic contraction since World War II. Lockdowns and related restrictions have ravaged businesses, hindered domestic demand and limited exports and tourism.

Some sectors of the Italian economy have started to recover, or will in the near future as vaccination gathers more steam. But the pandemic is likely to leave long-term scars. The nation’s output is now at levels last seen in the year 2000. Italian public finances were in a fragile state prior to the COVID-19 outbreak; higher debt taken on to underpin the economy in the past year has now compounded its fiscal challenges.

Though Italy’s banking sector has become more resilient in recent years, as reflected in declining non-performing loans, financial market turmoil could pose major problems. Italian banks still own a sizeable portion of government debt, about 10% of their total assets. An increase in corporate bankruptcies and payment difficulties will have a pronounced impact on bank balance sheets.

Last year, Italy’s fiscal support measures amounted to €110 billion, or 6% of GDP. The effort helped prevent more substantial damage to the economy, but fell far short of the packages provided in some other advanced economies. The support failed to reach the most needy businesses and consumers, leaving many without sufficient safety nets. Italy’s short-time work scheme, which kept the ‘headline’ unemployment rate in check, has been among the least generous of its peers. 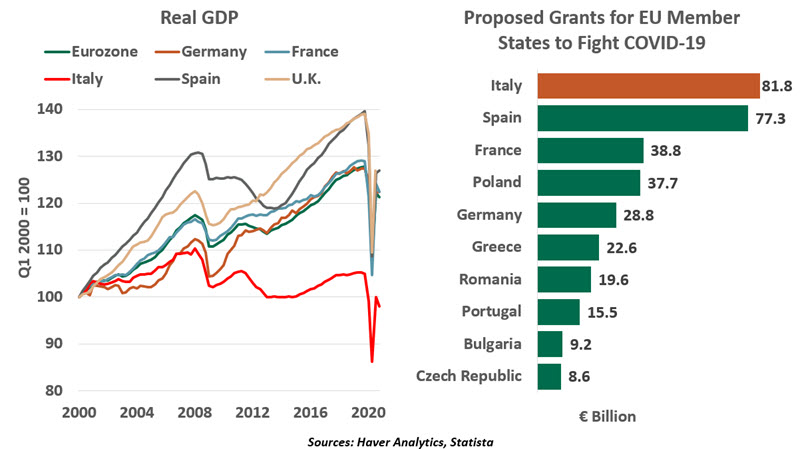 “Italian economic woes will linger long after the pandemic recedes.”

Rome is set to be the top beneficiary of the EU recovery fund, receiving €209 billion divided into about €82 billion in grants and €127 billion in loans. However, disbursements are likely to begin only in the second half of the year after the European Commission’s scrutiny of individual reform plans. The first half of 2021 looks like it will be very difficult for Italy.

European funds will likely underpin the economy, reducing the likelihood of financial turmoil, but Italy’s poor record in spending European structural and investment funds ─ a process known as “absorption” ─ will continue to hinder growth. In 2019, Italy spent only 30.7% of EU funds, the worst absorption rate. Complex bureaucracy and inefficient public administration have been the biggest barriers.

Italy can’t afford another snap election or a vacuum at the top of government while it deals with the pandemic and an associated economic crisis. Italy has tasked a known crisis fighter, former European Central Bank President Mario Draghi, to form a new government. While financial markets have welcomed the possibility of Draghi leading the country, it is not clear he will be able to do “whatever it takes” to get Italy out of its current malaise.

Our coverage of the COVID-19 shocks has often pondered what changes brought about by the virus will be temporary, and which longer-lasting. In the latter category is the shift seen in the U.S. residential rental market, which may never be the same as it was prior to the pandemic. Two major factors are driving the transition.

Firstly, apartment renters are showing signs of stress. The National Multifamily Housing Council reports that on-time payments are in decline, amid persistent unemployment and fading support programs. An Apartment List survey found 28% of renters are behind on their rent, with low-income and minority renters most likely to be accruing overdue payments. Many landlords have offered rent concessions to preserve some cash flow from their properties.

In a well-functioning market, renters who do not pay are evicted, and new tenants take their places. The recession has broken this lifecycle. National and local eviction moratoriums have allowed tenants to say in place, with a further federal extension being contemplated by Congress.

Even after a unit is vacated, the usual demand for rental units has not returned, as seen in rising apartment vacancy rates and falling rents. This stems from the second pandemic-related trend: outmigration from cities. Rental rates have fallen most in urban areas known for high costs of living and a higher concentration of knowledge workers who can do their jobs remotely. A Yardi RentCafé survey found New York City, Seattle and San Francisco among the cities with most renters leaving in 2020.

“Will the shift away from urban living endure?” 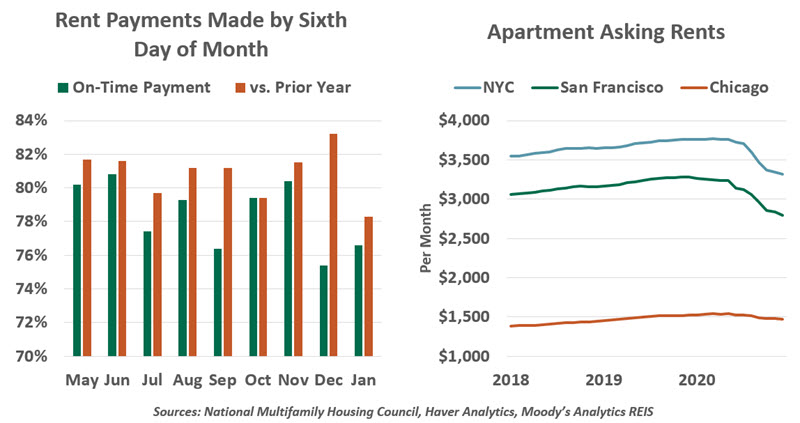 Demand for apartment space has also been compressed as renters become home owners. Housing market activity has been frenzied, buoyed in part by rental refugees. Taken together, all of these forces have led rental rates down and put downward pressure on inflation.

Stimulus can support this market through its current challenges. The omnibus funding package passed in December included $25 billion in rental assistance for lower-income households, and the stimulus plan currently under debate includes $25 billion more. That would help struggling renters and overstretched landlords catch up, but would not cure the market dislocation.

The multifamily market was built for the way of life we knew through 2019; a full recovery would require a return to old patterns of working and socializing. But if remote work endures, formerly hot urban areas may need to reckon with permanently lower demand. Some day in the future, we may leave home without masks, but we may be walking out of very different homes.