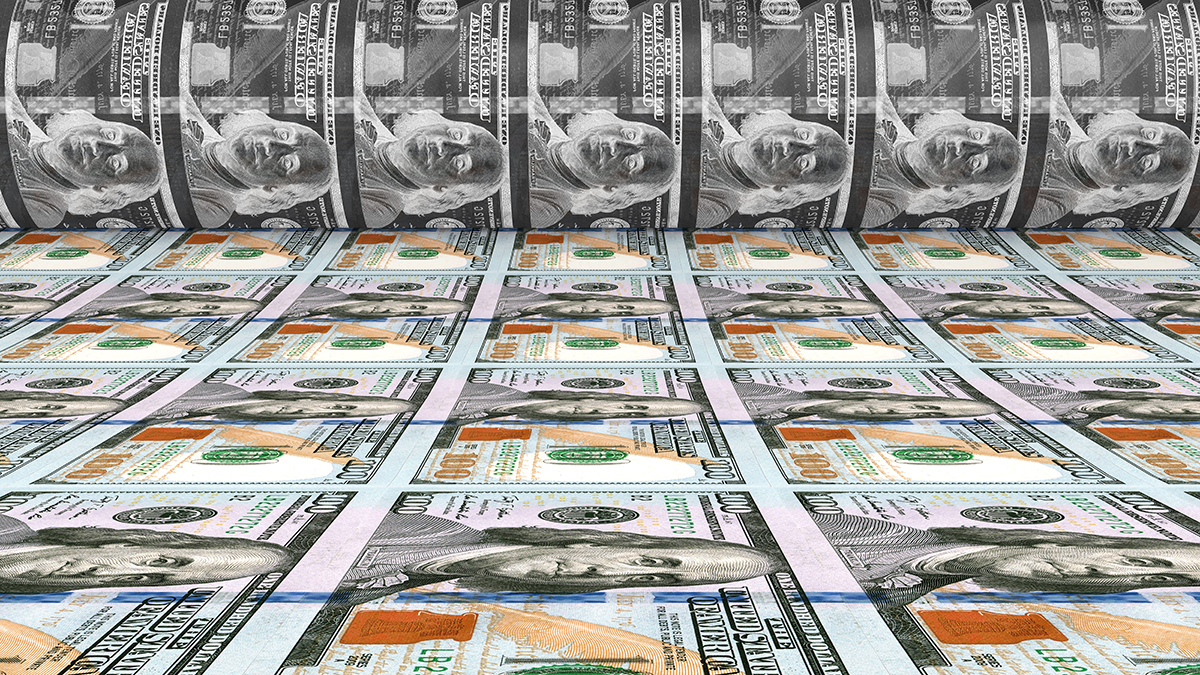 History may not repeat, but it often rhymes. With the Federal Open Market Committee (FOMC) now close to reducing its asset purchases, we should refresh our collective memory of the last taper. That traumatic episode appears to have weighed on the Fed’s current approach.

It all started innocently:

“If we see continued improvement and we have confidence that that is going to be sustained, then we could in the next few meetings, take a step down in our pace of purchases.” – Ben Bernanke, May 22, 2013.

That one sentence, in an unscripted response to a congressman’s question, set off a months-long, low-grade financial fever, now known as the “taper tantrum.”  Bernanke’s remark sowed confusion by hinting that policy might change sooner than market watchers anticipated, without any guidance about how the taper might proceed. Fixed income traders did not know how to adjust, and uncertainty led to instability. Bond yields rose, and equity volatility was elevated for the next month.

The market reaction in 2013 was not enough to deter the Fed. Tapering began that December, with net asset purchases reaching zero in October 2014. From that point, attention turned to interest rates; the first rate increase followed in December 2015, more than a year later. (And the second hike came a full year after that.) Today’s recovery is playing out over a shorter time frame, but it is clear that the Fed does not feel a need to rush from the taper to rate increases. 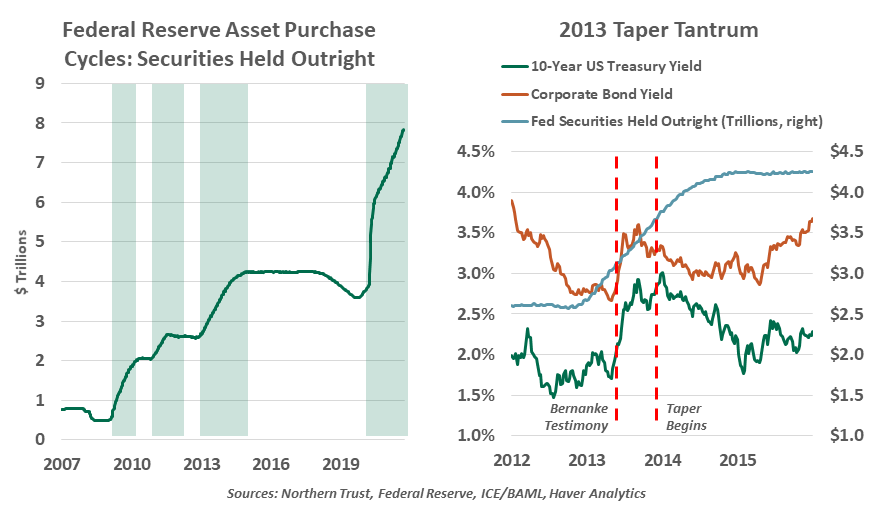 In hindsight, the 2013 selloff feels disproportionate. Asset purchases, or quantitative easing (QE), started as a mechanism to support bond markets in the depths of the financial crisis. The program had already completed two rounds without a market reaction. QE was always meant to be temporary. And Bernanke’s hint of change “in the next few meetings” was not an imminent threat, given that the committee meets only eight times per year.

Some of the circumstances today are familiar. Growth has resumed, employment is rising, and the economy is well on its way to recovery from an historic crisis. Jerome Powell, today’s Fed Chair, was a member of the Board of Governors during the start and end of the third round of QE. His lived experience may be a factor in the Fed’s current caution.

Today, as in 2013, lawmakers’ attention has been absorbed by arguments over the debt ceiling. A dispute over the debt limit played out over most of 2013, with the Treasury resorting to extraordinary measures to avoid a technical default. A final bill to raise the debt ceiling and end a brief government shutdown was ratified October 17; the taper was announced in December. After the Fed spent months calming markets, announcing a taper amid a fiscal crunch would have risked further damage. If the current debt limit dispute is not resolved by the November 2-3 FOMC meeting, the committee may deem it best to delay tapering this time around.

There are a few important differences between today and the post-financial crisis recovery. For one, tapering has been done before. Markets rarely have the same reaction to a repeated shock. We now know what it looks like for the Fed to remove this support; it’s no cause for panic. And Powell has certainly taken the lessons of the “tantrum” to heart, repeatedly promising ample warning before asset purchase activity would change, helping to keep markets calm.

Fiscal conditions today are quite different than in 2013. The federal government just completed a fiscal response to the pandemic that was five times larger than the stimulus deployed following the 2008 financial crisis, with more spending bills under consideration. The emphasis heard in 2013 on fiscal discipline and deficit reduction has not persisted. The Fed’s support of the market for Treasury debt is more important when issuance is elevated.

The Fed is moving so cautiously that it has fallen behind its peer central banks. Among advanced economies, the European Central Bank, Bank of England, Bank of Canada, and Reserve Bank of Australia have each made clear statements that their asset purchases would wind down. Each of these economies had a comparable downturn and recovery cycle to that of the United States. Markets took these taper announcements in stride. 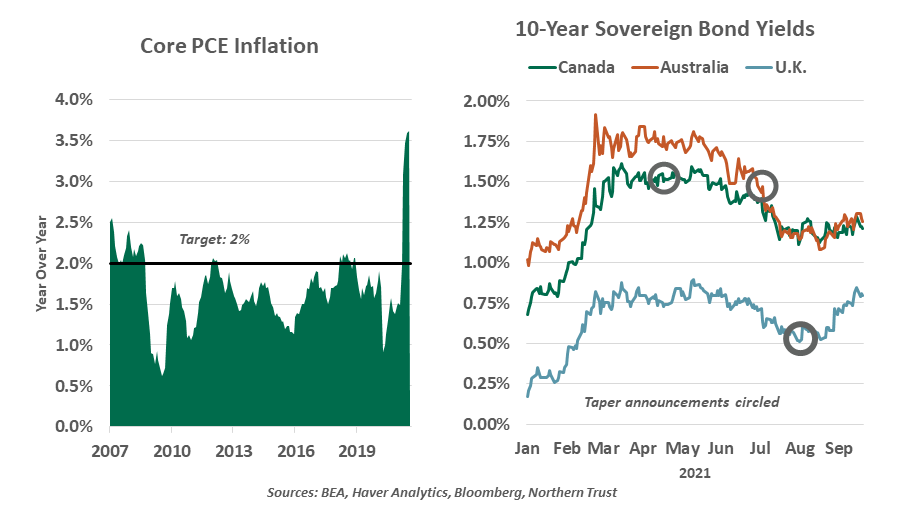 We are relieved at how sanguine fixed income markets have been about tapering this year. Powell first acknowledged the FOMC was “talking about talking about tapering” in June, and yields did not react. Risks of a government shutdown, a binding debt limit, uncertain fiscal legislation and elevated inflation have not led to any noticeable movement in interest rates.

Memories of 2013 help explain some of the Fed’s recent caution. A deliberative central bank is preferable to an erratic one, but excessive hesitation is also a risk. Fortunately, the Fed appears ready to act. This week’s FOMC statement included direct guidance: “a moderation in the pace of asset purchases may soon be warranted.”  Powell was more explicit in his press conference, suggesting tapering could be complete by the middle of 2022. The time is right: the economy is recovering, liquidity is ample and markets are ready. This time, there should be no fuss.